Company has always been a favourite of mine. I’m a fan of musicals in general, and Stephen Sondheim in particular. Company is arguably a jewel in his multi-faceted crown. All that said—it first premiered on Broadway in 1970, and maybe it’s a little dated. I don’t care because I know it and love it, but to a modern audience, maybe seeing it for the first time? Maybe a show whose central message is essentially “yay marriage” seems a little less than woke. I don’t know. But how do you fix something like that? Well, here’s a place to start—gender-flip the characters.

Company is a series of vignettes, a non-linear story of a bachelor named Robert, on his 35th birthday. Robert is the single guy surrounded by friends who are all coupled up. Marriage is all around him, yet Bobby can’t seem to find himself a relationship that works.

Sondheim wrote the music and lyrics, and George Furth wrote the book. It’s seen a bunch of revivals over the years, featuring the likes of Raul Esparza (Hannibal), Neil Patrick Harris (How I Met Your Mother), and John Barrowman (Doctor Who) in the central role of Bobby. In 2018, London’s West End gave the show a bit of a modern overhaul. Rosalie Craig stepped into the role, and Bobby became Bobbie.

It’s an interesting take. The age of 35 is supposed to be when single people start to feel the ticking of the biological clock (not always, of course—some single people are perfectly happy to remain that way, and good on them), and let’s face it, this has different implications when it’s a woman doing the ticking.

The original script doesn’t really address whether or not Bobby wants, say, kids. Men can procreate way later in life than women can, after all. While Bobby’s married friends keep telling him he should get married for the sake of having that kind of partner, you can bet that when it’s Bobbie, “don’t you want to have kids?” is going to be part of the discussion. The dance number “Tick Tock” has a bit more weight when you think of it in terms of the biological clock, as opposed to its original purpose—to give Donna McKechnie something to do in Act 2.

Gender-flipping the lead wasn’t the only change. The three girlfriends, April, Marta, and Kathy, now become boyfriends—Andy the ditzy flight attendant, PJ the outspoken New Yorker, and Theo, the small-town boy who wants to be a husband. It works pretty well.

And the couple about to celebrate their wedding are no longer Paul and Amy, they are Paul and his boyfriend Jamie, and they are my favourite thing about the new version. Director Marianne Elliott tweaked the book and lyrics here and there to reflect this, and it’s fabulous—Amy’s line, “what are people going to think about us getting married after living together for so long? They’ll think I’m pregnant!” is even funnier coming out of Jamie. Of course, soon after, when Bobbie says “marry me, Jamie, and everyone will leave us alone” and it’s a woman speaking to a gay man…well, that has implications too.

The West End production is finally crossing the pond and coming to Broadway. Bobbie is being played by Katrina Lenk, and Patti Lupone will continue as Joanne, the role she has played since the 2011 concert version at the Philharmonic with Neil Patrick Harris. 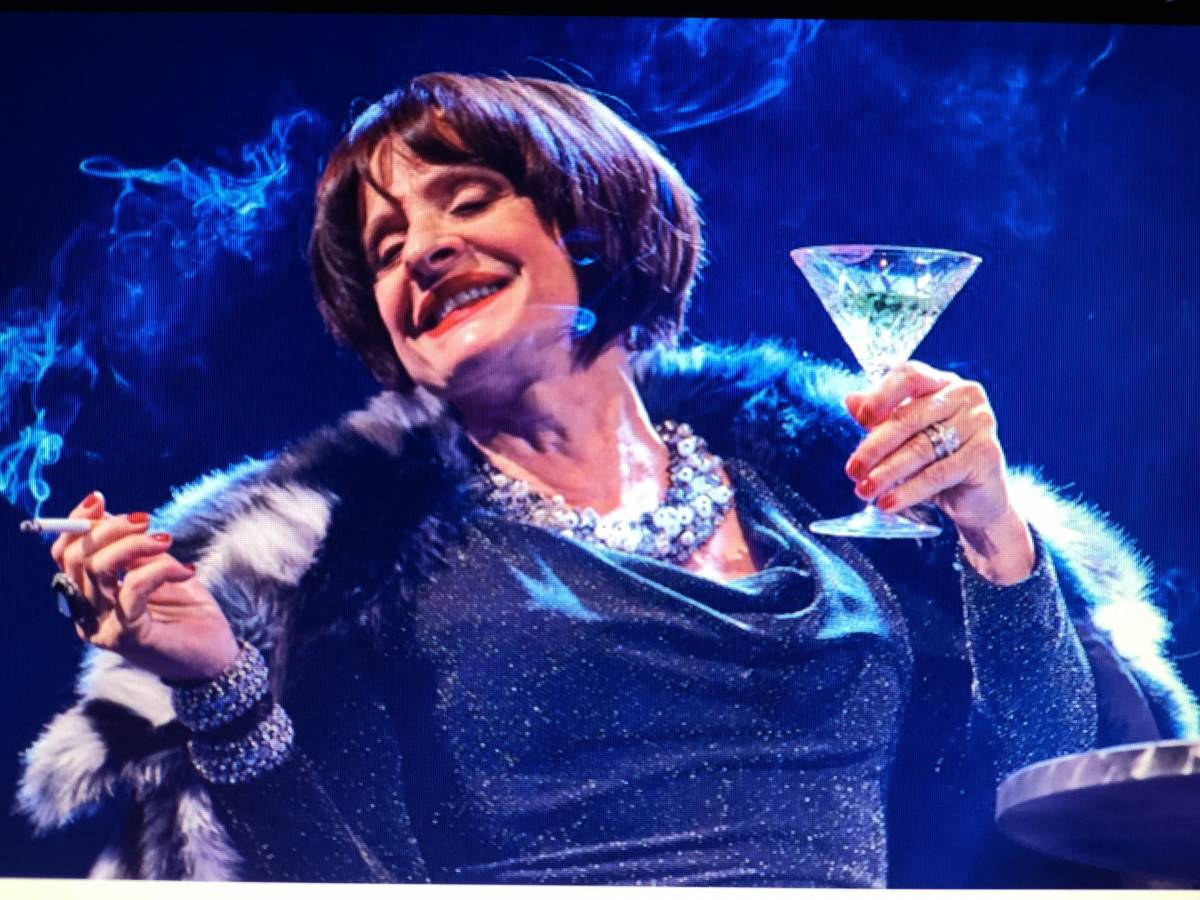 A word about Joanne. She was originated by the glorious Elaine Stritch, and she’s my favourite character in the piece. She’s smart and snarky and funny and sad, and “Ladies Who Lunch” is one of the greatest arias written for an alto in the whole of musical theatre. And I played her in college, so yes, I’m a little biased.

Patti Lupone is fantastic in the role, if a little too eager (for my taste) to remind everyone that she is a really good singer (“Ladies” isn’t the kind of song that calls for a really good singer. Doesn’t hurt if you are one, but you don’t need to go out of your way to remind anyone). I got a peek at the revival script from a friend who bought it in the UK, and I’m not going to lie—as excited as I am to see this production, I’m a little concerned about Joanne. Not that Patti won’t be terrific, because I saw her do it with NPH and she’s amazing—but hear me out.

In the original script, Joanne makes a pass at Bobby. The motivation behind this is obviously open to interpretation by the actor and the director, but in my opinion, it’s not for real. She suggests that they sleep together, not (I think) because she wants to, but because she is trying to shock Bobby into looking seriously at his single life and taking some actual action. For all her abrasive talk and wit, Joanne is very happy with Larry, her third husband, who gets her like nobody else ever did. I don’t think she wants to cheat on him, and I think her feelings toward Bobby are more maternal than anything else. Gender-flipping shouldn’t affect this much, when you think about it. Bobbie’s girl friend suggesting they hook up might even be more of a shock to her. But instead, Joanne suggests that Bobbie hook up with Larry. Say what?

I mean, I’ll see it when it hits Broadway, and I’ll try to keep an open mind. But Joanne pimping out her loving husband, even theoretically, feels wrong in a show where the central theme is yay-marriage-yay. And really, can’t Joanne hit on Bobbie on her own behalf, even if it’s fake? Maybe it’s me, but suggesting your single girl friend boink your husband slams the vibe of the show back into the ‘70s, when the sexual revolution brought that mentality into the mainstream. And I’m pretty sure that’s not something they wanted, after updating the show to include gay marriage and lyrics about smartphones.

The Joanne/Bobby argument is one that fans of the show have been having for almost half a century now. I think we enjoy it, as much as it frustrates us. My peek at the script didn’t include a look at the Bobby/Peter scene, where Peter asks Bobby about his homosexual experiences. Did they leave that dialogue mostly as-is, but have it come out of Susan instead? That would make more sense, to have Susan make a passive-aggressive gay remark at Bobbie, and Bobbie gets a little weirded out and decide her friend is kidding around.

That scene comes right before the Joanne scene, so it would make more sense to me to then follow up with Bobbie’s other lady friend actively hitting on her (even if it’s fake). It could be a setup and a payoff, back to back. And anyway—Joanne may like to push people for their betterment and her own amusement, but leave Larry out of it, okay? He’s my favourite of the husbands, a genuinely good guy who is crazy about his wife, and he puts up with enough.

Again, this is nit-picky. I’m very excited to see this revival, and even more so to see this show that I love brought into the modern era. That is to say, I’m excited for modern audiences to get to see it. You know the IFC series Documentary Now? Go look up their episode “Co-op: The Musical”…but first, hunt down the documentary about the filming of the Company original cast album. Watch them back to back sometime.

And here’s another concern I can’t shake. When I see the revival, with the changes for both the good and the bad, am I going to find them necessary? It drives me crazy when something is revived and changed for no real reason. I noticed, in the last bit of “Not Getting Married”, that the butter knives were changed to salad bowls, and for the life of me, I couldn’t figure out why. It didn’t make it any better, or funnier, and I have to say, when something like that is changed just for the sake of changing it, I want to find the person who made the alteration and beat them over the head with George Lucas.

When the audience doesn’t know the original well, the Special Edition version doesn’t matter much. To me, the new and pointless changes are distracting as hell. I get that Company had a few of those that legitimately needed to happen (“I could understand a person if he happened to be gay” is probably a better idea than the original lyric), but salad bowls? Maybe they could have done the gender-flipping, and left rest of it alone? Maybe the right place for the show is a happy medium between the two.

All that said—yay a new Company revival! Yay a potential new amazing female role in the Broadway canon! Yay any time a woman gets to play a role written for a man—it gives me hope that my lifelong dream of being able to play Guido Contini in Nine might one day actually come true. And yay people like Marianne Elliott, and anyone else who thinks outside the box, especially where art is concerned. As all of Bobby/Bobbie’s friends say to him/her—what would we do without you?