The kind of long narrative of serialized TV can be wonderfully immersive, but here at 25YL we also recognize the value of a great standalone episode. Join us as we explore horror and sci-fi anthologies old and new, along with some other standout episodes of shows you love. This week, Will Johnson discusses another episode of The Twilight Zone.

For decades, television is one of the many mediums that has attempted to define the family unit in specific terms. Man and wife, one and a half children, surrounded by the white picket fence and, maybe, man’s best friend to play babysitter and family mascot. Despite the evolving and turbulent social norms in the United States’ young history, though perhaps more shielded in the ’50s before exploding outward like an overloaded pressure cooker in the ’60s and onwards, the concept of a family unit has persisted.

Despite the fact that most marriages end in divorce and each succeeding generation has less interest in “traditional” homes, all targeted marketing, especially on TV around Christmas time, not to mention most dramas and sitcoms, define the family in almost archaic terms. The only difference being that married couples can be shown sleeping in the same bed now.

I’m someone who has personally witnessed the “traditional” family dynamic crumble at its foundations, creating aftershocks that destroy an already fragile public face of unity. On top of that, I’m not married, but have children, something I’d probably be crucified for on E Main Street (if it were 1955) for displaying such acts of social barbarity. I must say that seeing a subtly fractious and nearly twisted view of familial prosperity in The Twilight Zone’s “Long Distance Call”, which premiered in March of 1961, was as rewarding as it was shocking and, most importantly, true to life.

In a mere 25 minutes, “Long Distance Call” manages to display the oft-rocky relationship between mother-in-law and wife, the pseudo-Oedipal “possession” of a mother over a son, a husband and wife’s sex life (granted, it being highly suggested and, of course, the two still sleep in separate beds), and the acts of selfishness that, as I’ve witnessed, shake a family to its foundation. As if the episode wasn’t rocking the boat of 1960s television norms already, “Long Distance Call” surprises the viewer even more by…having a happy ending?!

“Long Distance Call’s” premise might not exactly inform the viewer that what they would be seeing was well-written subversion of family life. In fact, the basic premise makes the episode seem like a fairly simple fantasy story. Young Billy (Bill Mumy) has just turned five. His quiet but affectionate father Chris (Philip Abbott) and the slightly on-edge Sylvia (Patricia Smith) have showered him with presents but, for Billy, the most important present comes from his grandmother (Lili Darvas), who lives in the home and is particularly fragile. While Chris dotes on her, hoping for the best, even Grandma knows her time is limited.

Her gift to Billy is a toy telephone, which she says will allow Billy to talk to her even when she isn’t there. To Billy, that just means when Grandma is not in the room, but Chris and Sylvia pick up on the fact that Grandma is hinting at her eventual death. Shortly after the birthday party and the gift-giving, Grandma falls ill and is bedridden. She does get to say goodbye to Billy, indicating that Billy gave her life, especially when her son Chris was “stolen” from her.

After Grandma’s passing, Chris and Sylvia become concerned about Billy. He seems perfectly fine after Grandma’s death, despite their closeness. But as they slowly discover, it is because Billy thinks he is talking to Grandma over the toy phone he received for his birthday. Chris thinks it’s a harmless way for Billy’s young brain to deal with death but Sylvia thinks Grandma’s disdain for her has power beyond the grave. Once Billy starts engaging in dangerous activities, such as playing in the street, Chris and Sylvia realize the humble little toy phone may have a sinister purpose. 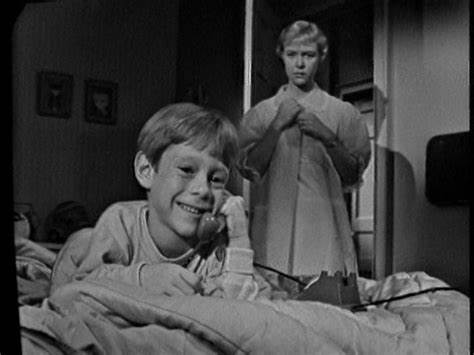 Adding to “Long Distance Call’s” already eerie nature of communication beyond the grave, especially in regards to its effect on children, is how it is physically presented. As Ken Reid, television historian and podcaster revealed to me as I looked at the peculiar production values, this particular episode was shot on video, hence why it has the look of a soap opera. Per Reid, this technique was used to save money, though only a handful of The Twilight Zone episodes ever went with this technique.

According to Wikipedia (without a listed source, so take this with a grain of salt though it does confirm Reid’s statement):

As The Twilight Zone‘s second season began, the production was informed by CBS that at about $65,000 per episode, the show was exceeding its budget. By November 1960, 16 episodes, more than half of the projected 29, were already filmed, and five of those had been broadcast. It was decided that six consecutive episodes would be videotaped at CBS Television City in the manner of a live drama and then transferred to 16-millimeter film for future syndicated TV transmissions. Eventual savings amounted to only about $30,000 for all six entries, which was judged to be insufficient to offset the loss of depth of visual perspective that only film could offer. The shows wound up looking little better than set-bound soap operas and as a result the experiment was deemed a failure and never tried again.

As Reid pointed out to me, the studios tended to erase videotapes so they could be used over and over again. So as not to erase the content itself, CBS would use a Kinescope to preserve the episode. In essence, they would use a celluloid film camera and “record” the video episode, which was projected on a screen.

As a result of this technique, “Long Distance Call” feels both archival and voyeuristic since the video quality makes it look like we are watching “real” people on a stage. In the smaller moments, like when we are in Billy’s room watching him talk to his dead Grandma on his phone while his mother watches with horror in the background, or when we see Chris and Sylvia engage in more than just a simple kiss after declaring “let’s go to bed”, we as the viewer feel, perhaps, like Grandma, watching events unfold from on high…and not feeling action must be taken.

Let’s look at it from Grandma’s perspective. It is revealed in the episode that Grandma lost two children before Chris and she remained insanely protective of him. When Sylvia came and “took him away”, her next best connection was the innocent Billy who shared Grandma’s devotion. If she is watching from beyond the grave, she is seeing a lonely and sad Billy and Sylvia continually “stealing” her son from her. Why not call Billy up on the toy phone and try to get his attention?

The episode has two twists. The first is that Grandma loves Billy so much that she has him unwillingly commit suicide to join her in whatever form the afterlife is in The Twilight Zone. First, Billy is almost hit by a car when told to play in the street, and then, in a truly disturbing scenario, Billy jumps into a pond and drowns, per Grandma’s explicit orders. A typical Twilight Zone may end on this note, finding some message to convey regarding devotion and safety. But the second twist comes in shortly after: a happy ending?

Sylvia and Chris discover that Billy’s toy is the real deal: a communication superhighway to the afterlife. While Sylvia reacts in horror, Chris decides to appeal to his mother and beg her to let Billy live. He suspects that because Grandma said Billy gave her life, she needs that presence in heaven (hell? purgatory?) to continue, feeling she already lost her third child with Chris’ marriage to Sylvia. Chris, using the toy phone, reasons that if Grandma really loves Billy, she would give him life, not death, so he could grow up and experience school, girls, and…long pants? (I must admit, I’m still trying to understand that one.)

It works, and Billy is brought back to life and the story ends. Rod Serling’s ambiguous closing narration follows:

“A toy telephone, an act of faith, a set of improbable circumstances, all combine to probe a mystery, to fathom a depth, to send a facet of light into a dark after-region, to be believed or disbelieved, depending on your frame of reference. A fact or a fantasy, a substance or a shadow—but all of it very much a part of The Twilight Zone.”

Thus ends an excellent episode of The Twilight Zone that not only surprises the viewer with a multitude of twists but, as mentioned, challenged the social conventions of family life not often shown in television during those early days of broadcasting. Families are unique and sometimes driven by more than just social dictated loyalty: there are axes to grind, goals to accomplish that not everyone agrees with, and ideas of “possession” that rankle some and comfort others.

In essence, no family is the same despite the proclamations of the time. And The Twilight Zone gives you that, as all good metaphorical shows do, by depicting realistic family dynamics continuing beyond this realm.