After the lows of Episode 4, Carnival Row picks up again with two episodes directed by Andy Goddard. Whilst things feel more relaxed and focused rather than throwing a lot of information at you, there are still issues to do with story telling mechanics that feel somewhat predictable.

We are re-introduced to the creepy witch character played by Alice Krige with the product of her mining Philo’s seed into a baby version of a “Dark Asher”—the very thing that is killing everyone. This scene is pretty well done, and the creature effects of the baby monstrosity are effective. Here we learn that this creature is not easily killable considering they cut it into sushi chunks and it continues wriggling, setting the scene for the challenge that is to come. Philo is understandably not sharing the fruits of his investigation with the higher ups, and this is going to cause him some problems later on. Philo has also started to dwell on the death of Aisling seen in the first episode. Thanks to what we know about Philo’s origins now, it doesn’t take anyone with a degree in story telling to figure out where this is going.

Thankfully the story involving Ezra and Imogen Spurnrose actually gets interesting at this point in the show. A scene where Imogen stands up to her brother actually made me like the character a lot more than I had been. Imogen is adamant that some kind of financial alliance with Fae neighbour Mr. Agreus is beneficial to their situation due to her brothers losing of their fortune, and actually seeing this character given some agency rather than her being just rich caricature is a relief.

Imogen gets looks of disapproval when seen out on the town with Agreus, but is starting to become charmed by him, and their relationship is starting to feel real if still somewhat fraught with tension. This strand is sinking into place with a real critique of the rich seemingly willing to do anything to stay that way. It’s something we see every day in real life, and this feels like it needs to lead to some kind of reckoning, but I’m still unsure as to how this will play out. 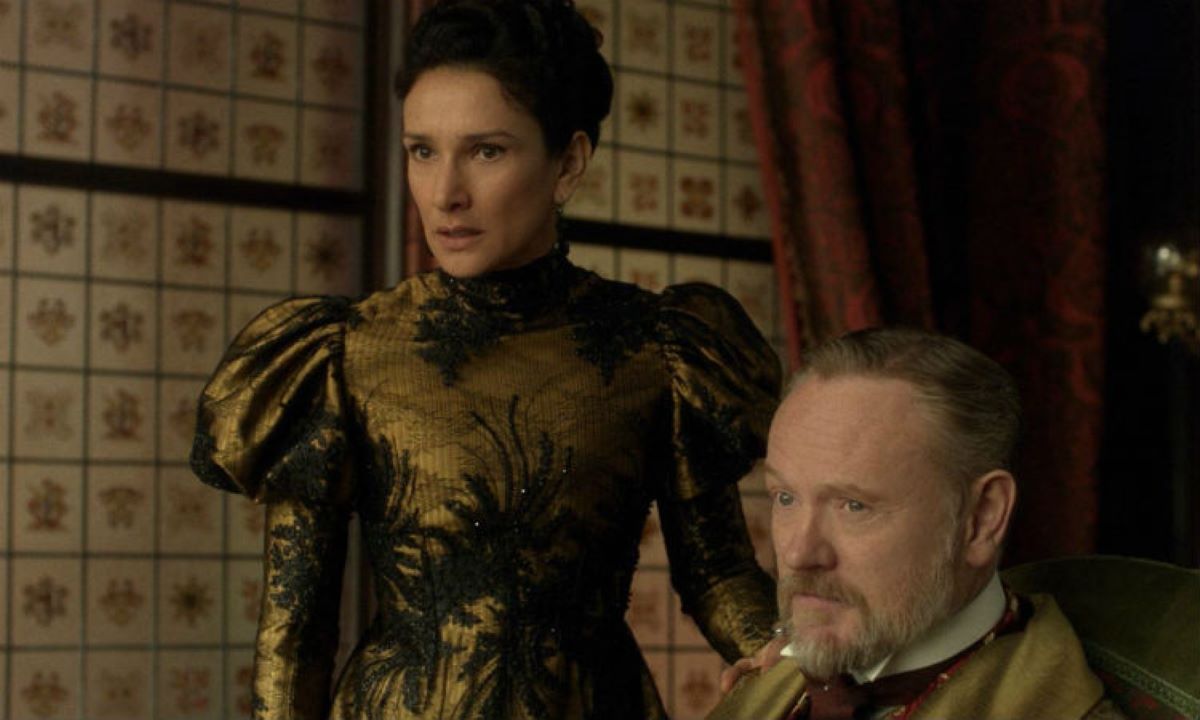 The career decline of Jared Harris as Chancellor Breakspeare sadly continues apace. There are scenes where he just doesn’t feel engaged at all by his character or the writing and it feels like he collected an easy payday here. The idea seems to be that Breakspeare is the last bastion between racial harmony and all out anarchy, but the performance just doesn’t sell this charismatic politician.

His son Jonah is grounded thanks to his predilection for the fae brothels and this brings him to focus on a new political rival, the daughter of Longerbane. whose father was murdered by Mrs. Breakspeare. Scenes in parliament really labour the whole Brexit metaphor, and I wonder where this is going this late in the day and if there will be any pay off here—and, frankly, if I will even care. As we are currently subject to masses of indecision in British parliament thanks to the mess of Brexit, I’m actually at a point where I don’t want this metaphor in my entertainment. Kudos though to the production team for actually trying, even if it doesn’t work.

Philo’s investigation of the previous victim of the dark asher, who worked in the orphanage where he grew up, leads him to uncover a secret relationship between the dead man and an older more prominent rich doctor. It turns out that the two of them frequented the brothel at the centre of much of this show in order to carry on their affair. When Philo questions the man, it leads him to identify with secrets being kept, and everything Philo feels when being told the tale of forbidden love, Orlando Bloom plays perfectly. The pain, the guilt and all of it are etched on his face without him saying a word. In this weird world we see in Carnival Row, this affair feels like the least weird thing here, but this scene may well be a highlight for me in the show overall.

Which is why it is such a shame to report that the closeted doctor becomes the dark asher’s latest victim come episodes end. This honestly feels like a misstep, and something left over from a decade old screenplay that I’m surprised there isn’t more online outrage about. It would have been nice to let the forbidden relationship hang in the air as a genuine tragedy, overlaying the world we are placed in. Killing off the show’s first gay character we know of (outside of Vignette and Tourmaline) feels like quite a backwards step, and to be honest, leaves a nasty taste that has coloured my opinions of the show overall.

Speaking of secret relationships, Vignette and Tourmaline rekindle their relationship in Episode 6 with a quick kiss. Vignette was hardly in Episode 5. We see she is still collecting money for the mob and see her give Philo the cold shoulder briefly, but that’s about it. Later on, Vignette visits a library and has a whole flashback to the war and begins to feel the trauma of her experience. Cara Delevigne is great here, and continues to be one of the MVP’s of the show. Vignette is carted off by the police in a meat wagon, presumably to be put in a hospital, but more likely incarcerated for deportation—more on that later. 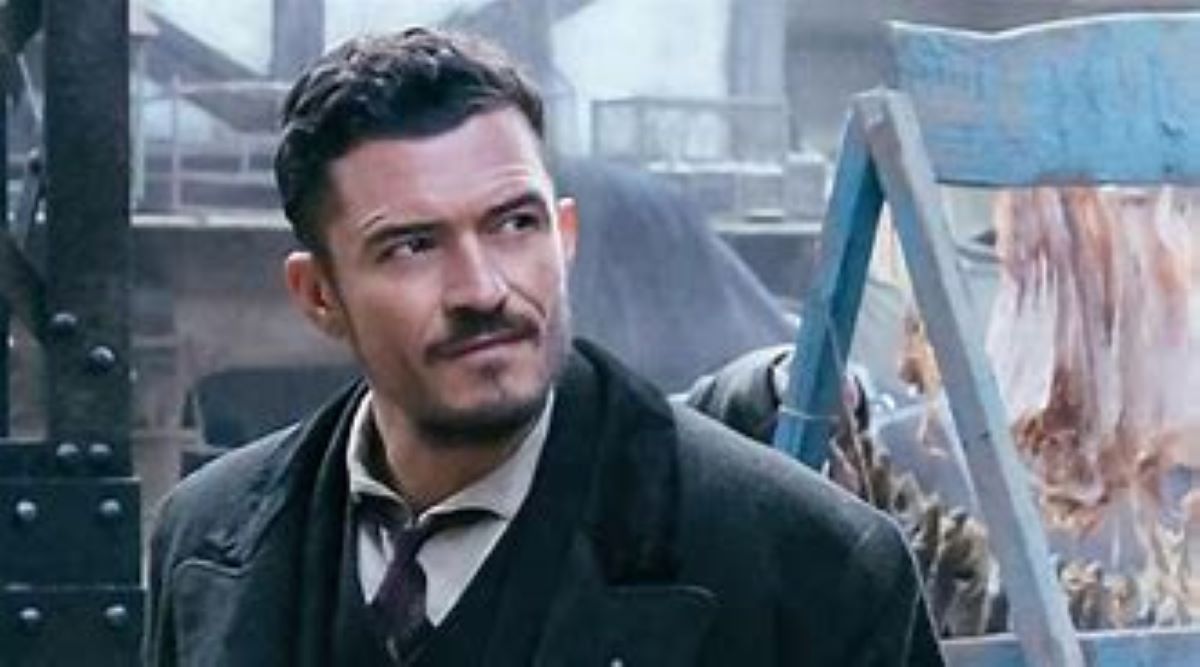 It is of course revealed that Aisling was Philo’s mother all along. This was heavily signposted and doesn’t feel all that shocking when it happens. It’s only really Bloom’s performance that has sold the whole thing so it just about works. The police continue to get suspicious and then Philo confesses to his landlady lover his fae origins and it understandably doesn’t work out. The police get wind of it, and the mutton chopped copper that Philo punched in Episode 1 then gets his druthers when he gets to arrest Philo for suspicion of murder and beat him up.

Jonah momentarily becomes interesting again when he skips out on his studies to attend Longerbane’s funeral. He then stumbles upon the dead politician’s daughter seemingly mocking the man at his funeral. They have a little talk about the younger folk clearing the old folk out for a new world order, but truthfully it’s still the least interesting aspect of the story. There is also a new subplot about some kind of Puck uprising based on some kind of religion as they march through the streets self-flaggelating. This is actually pretty interesting, but it’s fairly late in the day and feels like its sewing seeds for something in Season 2 rather than anything that might pay off now. If they go with this as a metaphor for what I think they are going to go for, it could be great or it could end up as clumsy as the Brexit stuff. The war on terror isn’t really something in the news much these days so if they are going to echo fears from ten years ago then I hope they do a better job.

Ordinarily watching something as bad as Episode 4 of Carnival Row would see me giving up, but Episodes 5 and 6 see the show back on steadier ground. Things feel overall a lot better in terms of direction, and it’s only certain narrative choices that let the side down. The reveal of Philo’s mother feels shockingly obvious when the hints are dropped and it takes a whole episode to reveal this when it was so heavily signposted. This kind of reveal would have been great come the finale, but although drawn out, it feels necessary as it leads to Philo’s incarceration. Speaking of which, the fact that Vignette is also led away for imprisonment at the same exact time is just head slappingly contrived. We are heading into the last two episodes now. Do you think they might encounter each other in prison and reconcile or team up? Well maybe…

As it stands I am still invested in Carnival Row. I love the world and I love the details and politics inherent in the ultimate immigrant story. It’s so rich with infinite possibilities for endless stories. It’s just the mechanics of the narrative that feel really clumsy at present. I can’t help but feel that we just should have gotten the film based on that blacklisted script ten years ago without the filler, and yet I am hoping for a suitably shocking and thrilling climax that will keep me coming back for further seasons.