There is a certain irony in telling a story about the futility of war by making the main character a gun-toting alien who walks into a military facility on Earth and tries to steal water while beating the crap out of human soldiers. That being said, does writer-director Mark Owen’s latest film Rueful Warrior swim above the well of mindless action flicks prevalent in the medium, or does it drown in its own ambition?

Rueful Warrior—a Belloq Productions sci-fi action short film—tells the story of an alien warrior, Yalalia (Michelle Fahrenheim), as she attempts to complete her mission of getting water back to her home planet to prevent the collapse of her civilization. Her goal takes her into a facility where the precious water is being stored, but a squad of human soldiers stand in her way. The film is essentially a 15 minute-long fight sequence, and once the action takes off, it doesn’t let up until the credits roll.

The idea seems to be to explore the concept of war as a futile, unnecessary part of conflict resolution. All the characters in the story are bound by orders—their roles merely products of the overall context of war and violence. They are, first and foremost, soldiers. Their job is to follow orders with minimal, if any, room for questioning or hesitation. This type of character presents an ideal, and commonly used, canvas to explore the often conflicting themes of morality and duty.

Alien warrior Yalalia seems to be a little less of a puppet to these circumstances. Actress Michelle Fahrenheim does a captivating job when it comes to portraying this. Watching her go through the story, I couldn’t help but to appreciate a duality of badassness (that is a word now) and sweetness in her role as a reluctant, but very effective, warrior. Violence, as demonstrated throughout her actions in the film, is her last resort. For example, during the initial gunfight, it was clear to see that while the human soldiers were shooting to kill, Yalalia was instead responding with gunfire that specifically targeted her enemies’ weapons, essentially attempting to only disarm them. 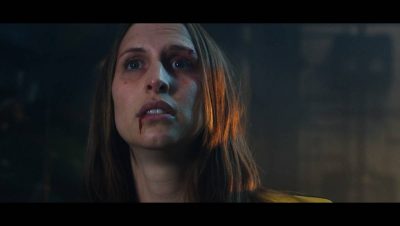 The human soldiers, however, represent a different side. They lean towards the duty aspect of their role as military members. The film explores this in a spectrum, however, which I thought was a nice touch. Some of the soldiers seem to enjoy the violence—taunting and smiling during the fights. One of them spits on Yalalia’s face for no discernible reason—a sign of blind contempt for “the other.” One specific soldier, Wise (Claire Cartwright), doesn’t hesitate in carrying out her duties, but at least has the presence of mind to scold the soldier who spat on Yalalia. Nuances in character such as these make the soldiers more than just a handful of bodies in uniform, showing that regardless of which side of the conflict they stand on, there’s a certain amount of individuality to each of them.

The stand-out soldier is the leader of the group, Shade (Oliver Park). But I won’t go too much into his character, because he’s a huge part of what’s, in my opinion, the most powerful scene of the film. Giving too much insight into his character might take away from the experience. However, it would be awfully unfair to entirely skip him, so I will say that his character resonated with me the most, and Park’s portrayal has a lot to do with it.

Rueful Warrior’s setting powerfully represents the themes of war, morality, duty, and the internal conflict they create. The story takes place in a bleak, industrial, enclosed space. The lighting, color palette, and sound design also work together to enhance a feeling of claustrophobia from where there seems to be no way out.

This location also plays an important part in injecting the film with symbolism. The characters in the story are trapped within a metal, lifeless maze of humanity’s own creation—much like the war they’ve let take over their lives. They’re surrounded by life-giving water, but it’s trapped within steel tanks and contained by valves. It’s worth noting that what Yalalia came looking for in the first place was water as a resource for life. The open water tank in the middle of the facility ends up playing an important part later on in the film which also strengthens the use of water as symbolism.

The film is not without flaws, as no film ever is. Among the weaker aspects of the film is the dialogue. Characters lines are scarce—which is generally a good thing for action films—and exposition through dialogue also comes in small quantities (another plus). However, about half of the few lines that do make it into the movie sometimes feel a little too on-the-nose. This is ironically made more obvious by how effective the dramatic action and character portrayals are at conveying all the things the dialogue unsuccessfully attempts to straight-up tell the audience. The other half of the lines, however, pack an emotional punch that makes the superfluous ones easier to ignore.

Another element to consider is the action itself. The movie obviously relies on the delivery of fast-paced violence to fulfill the promises it makes to the audience, and it succeeds in relative terms. I didn’t come in expecting top-notch, feature film action sequences, so the few things that didn’t work for me were pretty much insignificant. The story and emotional significance of what takes place on-screen easily offset the few shortcomings I noticed in the action.

One of writer-director Owen’s goals was to show how female characters can stand toe-to-toe with male counterparts when it comes to the fighting arena. Normally, I would expect to see an emphasis on this aspect (looking at you, all-female shot in Avengers: Endgame). But the way Rueful Warrior goes about it is the opposite. The film doesn’t attempt to shove the idea down the audience’s throats, and in doing so, makes it way more effective. Yalalia is not a solid character because she’s a strong female. She’s a solid character because she’s a strong person (or alien in this case). The casual inclusion of other female characters—all engaging in the same behaviors and with the same skill as the males—also works to evidence that this is not a ham-fisted element. It’s just natural storytelling.

I’m usually not into action films unless they’re something John Wick-ish in quality. Rueful Warrior had all the potential to be exactly the kind of movie that wouldn’t work for me. But somehow I found in it all the elements of films that I appreciate: an emotionally strong story, a powerful controlling idea, and characters with agency.

So to pick up the question I posed at the beginning, did Mark Owen get it right with this one? My opinion is that the film probably won’t change many people’s lives when it comes to breaking new cinema ground, but it might make audiences see preconceived notions of duty, morality and war in a different light. And at the end of the day, that was probably the creative team’s mission all along. There’s obviously a good amount of heart poured into this film, and—much like the potentially planet-saving water that triggers the plot of Rueful Warrior—that is always refreshing to see.

Rueful Warrior is still on its festival tour. Upcoming screenings include the Portobello Film festival in London, UK (September 13, 2019); and Show Low Film Festival in Arizona, US (October 17-20, 2019).

E.T. Otero is a U.S. Navy sailor living in Spain. His hobbies include consuming media in all its forms, working on creative writing projects without ever finishing them, and coping with the crippling side effects of existentialism and the dizziness of freedom.