“Only the good die young” as the song goes. Over the years there have been a number of TV shows that have made an impact on us here at 25YL, which we have been sad to see struck down in their prime. A season or two that grabbed us, and…that’s it. Whether there is some sense of completion, or we are left dangling by a finger from the side of a cliff, these are shows that we think are worth remembering, re-visiting, or even watching now for the first time. This week Bryan O’Donnell takes a look at Terriers.

I’m upset all over again. In September 2010, FX debuted its quirky drama Terriers, about a pair of underdog private investigators in the San Diego area. Starring Donal Logue as Hank Dolworth and Michael Raymond-James as Britt Pollack, Terriers built a strong cult following and garnered tons of critical praise. However, after suffering from significantly low ratings, Terriers was canceled on December 6, 2010—a few days after the Season 1 finale aired.

Even though the cancellation was rumored as the season came to an end, it still hurt when the announcement was made. Rewatching nine years later, I was struck once again with a sense of sadness that Terriers was never given a chance to grow past a single season.

Not Your Average Crime Drama

While Terriers‘ roots were as a drama, the show’s comedy is peppered in with clever writing. For example, early in Episode 2, when Hank is asked if he has ever been deposed before, he responds: “No. I’ve been imposed upon, but never deposed. I posed once for a photo, but not, you know, for money.” Moments like this pop up continually throughout the series, giving the show its unique charm.

Terriers featured a satisfying overarching story that focused on money, greed, and murder in Ocean City. But instead of solely focusing on one continuing storyline (as we see in many TV shows today that sometimes feel like a 12-episode movie), Terriers also used “case of the week” episodes. These brief cases helped build character development. For example, in Episode 9, Britt shows perhaps some unexpected compassion and maturity when he helps a transgender sex worker solve a case of a missing friend. These episodes can be intricately well done, as in Episode 6, in which Hank and Britt track down a missing ring for a woman dying of cancer who has an adulterous husband.

But deep down, Terriers is a show about a man who has basically lost everything and will do whatever it takes to get it back. As the show opens, we learn that Hank has lost his job and his wife (for reasons initially unexplained). He is in AA and trying to make things right, all while solving undesirable cases as a private detective. But Hank isn’t ready to let go of his past yet. He still interacts with his former partner at the police department, Gustafson, who offers a piece of advice: “You’re not a cop anymore. And for good reason. So stop pretending to be one.” He still loves Gretchen, his ex-wife. He even decides to purchase the house they shared together when Gretchen puts it up for sale and announces she’s getting remarried. He feels a need to keep protecting her through cringe-worthy antics, which include running a background check on Gretchen’s new fiancé. 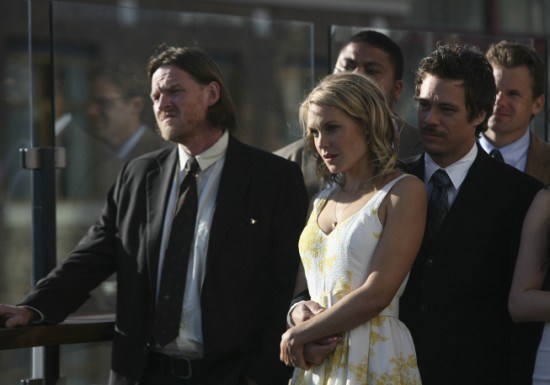 When Hank confronts Gretchen with news that her fiancé was part of a family accused of sexual abuse many years prior—news that she already knew and accepted as false accusations—he has gone too far. Gretchen tells him, “You’re the live grenade in my life” as she disinvites him from her wedding (which was probably for the best, regardless).

It’s hard to watch Hank struggle. You want to root for him, but sometimes he simply takes things too far. This imperfection, combined with his big heart, makes him a compelling lead character. In one moment, he’s doing something slightly illegal or making a terrible decision; in another, he’s laughing with and taking care of his sister Steph, who struggles with mental illness. (The Steph sub-storyline truly is both heartwarming and heartbreaking, and it’s just another piece of the puzzle that made Terriers exceptional.) By the end of the season, Hank has taken a step toward moving on when he tells Gretchen he will be selling the house. It’s unfortunate we never got a chance to see how far he is able to move on.

Filling in the Details

One of my favorite parts of the 13-episode season of Terriers is how the show reveals the details of Hank’s past—which doesn’t occur until Episode 11. This masterful episode manages to weave in moments from three years prior, showing the events that led to Hank being fired from the Ocean Beach Police Department as well as the final straw in his marriage. Three-year-prior Hank is convinced of the guilt of a man named Billy Whitman, who also turns out to be an ex-boyfriend of Hank’s then-wife Gretchen. Hank, who is drinking heavily on the job, is determined to pin a string of rapes on Whitman in a familiar attempt to protect Gretchen. Hank is accused of running Whitman off the road and planting evidence in his car, and Whitman then goes free.

This all mirrors present-day events, in which new evidence about the rapist has come to light and Whitman is brought back in for questioning. In a surprising and well-executed twist, the rapes were revealed to be committed by a cop—Gustafson’s current partner. Hank’s past behavior with the case and with Gretchen was inexcusable but he didn’t plant the evidence in Whitman’s car. If that had been discovered originally, would Hank have been fired? Would Gretchen still have left him? I think it’s safe to think yes regarding the latter, mainly because of Hank’s drinking, but it’s interesting to think about.

This episode easily could have been placed near the beginning of the season. (It also provides an “origin story” of sorts for Hank and Britt, as the two meet when Britt is questioned as part of the rapist case.) But placing it near the end of the season made it so much more effective, as we had already gotten to know and learned to love our characters—all without knowing exactly what led them to their current circumstances. This was just a brilliant episode of television.

If there is a silver lining to Terriers being canceled, I suppose it would be that the show didn’t leave us with a ton of unresolved loose ends. The overall corruption case that finally centered on a developer wanting to buy up tons of property in Ocean Beach and build an airport was basically wrapped up. Hank was selling the house he shared with Gretchen. Britt was going to prison for assaulting someone. The final episode does end with Hank driving Britt to begin his sentence, and he says he can go straight at the traffic light (go to prison) or hang a left and they escape together to Mexico. The episode ends before we get our answer, although I think it’s safe to say they go straight.

Terriers could end there. But it definitely didn’t have to. 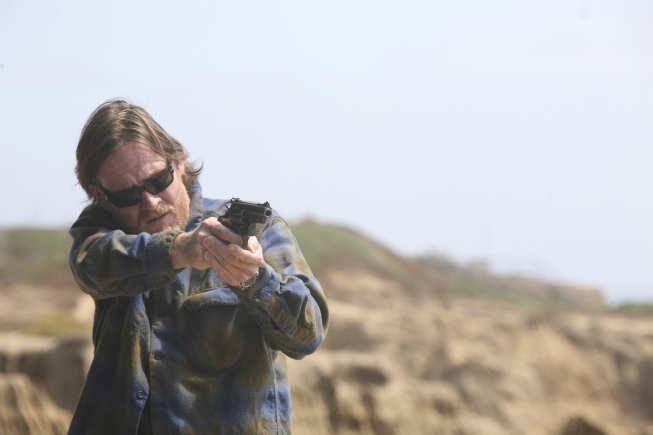 So Why Was It Canceled?

Despite strong critical acclaim, not very many people watched Terriers as it aired. The show averaged 509,000 viewers in the 18–49 demographic, which was the network’s lowest-rated show ever at the time according to the LA Times. It significantly underperformed against other FX shows at the time, including Damages, Dirt, and The Riches.

FX President John Landgraf conducted a poll of 600 people who had never seen the show. The study group enjoyed the episodes, but Landgraf told the LA Times, “If you want to know what it revealed, it revealed that those subtle charms [of Terriers] took a little while to get a hold of people and that’s a hard thing to sell.”

From what I remember about when Terriers was airing, I didn’t catch on to it right away. A cop show called Terriers just didn’t sound that appealing to me. People also have argued the show’s promotional marketing was misleading and I’d tend to agree. But week after week of critics praising the hell out of the show led me to check it out, and I was quickly hooked. I think if Terriers was made in today’s TV market, it would have survived longer than one season. It may have even thrived. Sometimes timing is everything.

Last year, there was mention of a revival, in which executive producer Shawn Ryan and creator Ted Griffin told TVGuide.com they would be on board with bringing Terriers back. I tend to roll my eyes with all of the shows being dredged up from years past (aside from Twin Peaks of course). But if Terriers were to come back, I’d watch it—even be excited for it. There hasn’t been much noise of a return of Terriers in the past year, so I’m not holding my breath. Then again, I never thought a Deadwood movie would ever happen, so maybe I won’t lose hope completely.

Regardless of whether we ever get to see Hank and Britt solve new cases at some point, Terriers was unfairly robbed of its potential. And that’s a real shame.