At the turn of the late 1980s, lauded filmmaker Brian De Palma needed a commercial win, the kind of score that filled his bank account and raised his cache to make more of his own artistic interests. He got that in 1987 with The Untouchables, a pet project of producer Art Linson who loved the gangland folklore possible with Paramount’s full rights to the characters. Buoyed by a 50% female audience dared into a violent picture, the film returned triple its budget after what would be the 6th highest debut of the year. Featuring all the director’s bells and whistles singing a new tune, The Untouchables returned bankability and creative acclaim to the career New Yorker.

For The Untouchables, De Palma came to the writer’s turf of The Windy City to update and redefine the tropes of gangster film “The Chicago Way.”  Bounding with all of the swagger and toughness of David Mamet’s script, The Untouchables amplifies and dramatizes the Prohibition takedown efforts of famed U.S. Treasury agent Eliot Ness against Chicago Outfit leader Al Capone previously serialized by the 1957 television program starring Robert Stack. Kevin Costner was the reluctant final pick for the lead from the pool of Miami Vice’s Don Johnson, a busy Mel Gibson, and a declining Mickey Rourke to play the lawmen pitted against De Palma’s insisted choice and transformed muse Robert De Niro, and all his peccadillos, as the worshiped crime lord.

With steep dramatic license for silver screen flair, the movie Hollywoodizes the story of the diligent crusader Ness coming to City of Broad Shoulders and getting the tutelage of a brash pair of those in the form of an aging Irish beat cop named Jimmy Malone, played by screen legend Sean Connery in his lone Academy Award-winning role despite what an Empire magazine poll voted as the worst movie accent of all-time. Mamet and De Palma condense the historical Primary Ten into a composite squad of four when Ness and Malone recruit rookie sharpshooter George Stone (Andy Garcia, getting to play a hero after being the heavy in Hal Ashby’s 8 Million Ways to Die) and elevate D.C. bookworm agent Oscar Wallace (the welcome amount of comic relief from Charles Martin Smith). Looming next to De Niro is an army of ne’er-do-well underlings covered with overcoats, fedoras, and Tommy guns led by his Outfit #2 Frank Nitti (Pale Rider’s Billy Drago, after Garcia was approached and moved to Stone).

Playwright hitmaker David Mamet showers these actors with outstanding lines, from long rants to rapid-fire conversation. While he may revise a heap of history, Mamet and his “Mamet Speak” give these actors steak to chew on and De Palma tension to shoot. Even with Connery’s rough accent brimming all over and Costner’s genteel baseline, there’s still not a clunker moment of line delivery all movie. All of it sizzles with cigar smoke mixing with spent gunpowder and lament and heroism teeter-totter strides with the moody and brassy pomp of Ennio Morricone’s top-shelf score.

The high style and period detail are on display in all areas of the movie’s big and clean production values. Many people go straight to the sleek and Oscar-nominated Giorgio Armani threads from costume designer Marilyn Vance (quite a step up from Ferris Bueller’s Day Off) and they would be keenly right to be impressed. Surfaces like costuming and the equally Oscar-nominated production designs of Amadeus’s Patrizia von Brandenstein, comedy specialist William A. Elliot comedy specialist, and Disney live-action veteran Hal Gausman drape, bath, and decorate pulpy antiquity out of the genuine Chicago locations.

From this Chicagaoan’s eyes, Eric Schwab, De Palma’s longtime location scout and manager (and a future second unit director on six of the man’s films), outdid himself with the rich finds and recreations that sought lurid decadence. From Roosevelt University standing in as the notorious Lexington Hotel, Frank Lloyd Wright’s The Rookery used as police headquarters on historic La Salle Street, the Tiffany Dome of the Chicago Cultural Center (and original city library) to those climactic Union Station steps and every church steeple in between, Chicago has rarely look better or more ominous.

Furthermore, the cinematographer and editors are part of what makes Brian De Palma and The Untouchables look so damn good and pop with visual storytelling. That success comes from successful and extensive collaboration. Cinematographer Stephen H. Burum would go on to work with the director for eight films. Editors Bill Pankow and Gerald G. Greenburg add nine and five trips, respectively, with De Palma to that teamwork tally. For more detail, Burum was highlighted by a nice interview piece in American Cinematographer for his work on The Untouchables last year. One fun fact is that the studio quickly talked him out of shooting in black-and-white. Be glad he was because the color always pops. The outstanding widescreen framing from Burum and the suspenseful sense of pacing from Pankow and Greenburg sharpen and highlight De Palma’s entertaining and engaging moves.

And those chops!  As for what we’re celebrating here on 25YL, the real talent is Brian De Palma and his endlessly studied and glorified filmmaking prowess and visual trademarks. His tricks of the trade are applied to a ballsy, dramatic adventure that bleeds buckets of crimson underneath all those aforementioned surfaces.  Let’s talk angles first.

In many establishing shots, including catching street signs and the high angle zooming straight down from an opening card of history notes to a character introduction of De Niro’s Capone getting pampered and nicked in a barber’s chair, De Palma uses canted angles. De Palma and Burum also enjoyed low angles that highlight height or the towering setting, like the Tiffany Dome presiding over the wide spectre looking up to Capone later. One stellar example of viewing location is the creeper sequence of Malone’s home invasion, where the low angle and the POV steps set up tension and surprise.

The most celebrated clinical example of angles comes from the “di-opt” split focus used during the blood oath church scene between Malone and Ness with that great “Chicago way” proverb. A half convex glass, one part near-sighted and one part far-sighted, kept both the two heroes in focus as well as the lofty and gorgeous church ceiling behind them. The stillness and depth of that scene, boosted by Mamet’s words and the mettle of the performances, are a very good foil to the pace of the rest of the picture.

The next visual feast of De Palma’s craft from the film are the movements. The amount of slow-sweeping pans and tracking shots of precise choreography are impressively mind-boggling. Long takes rule as the average shot length of The Untouchables is 5.7 seconds, a stout eternity by today’s thriller standards. Capone’s stalking baseball bat table circle monologue has a few cutaways for potential swing victim identification, but the circular pan from the low angle is gorgeous for both the hulking fear and finery on display. Even a shorter sequence like the Steadicam use following Wallace escorting a witness through the police hallways to his grave ending in the elevator are a long single-take marvel.

The piece-de-resistance of editing and motion married together is the movie’s storied gunfight climax set on lobby steps of Chicago’s Union Station. It’s a scene De Palma reduced from a moving train sequence for budget and shot on the fly in substitution. Out of necessity, De Palma mixed a source of homage, the Odessa Steps sequence from Sergei Eisenstein’s The Battleship Potemkin, to create his own holdout sequence where hurdles block the protagonists’ path for a necessary task. This classic scene also presents the best use of De Palma’s penchant for occasional slow-motion while amping up the sound work of the intersecting chess pieces. Pankow and Greenburg’s editing assistance really shines. Replica or note to Eisenstein, the result is brilliant and better than what some big-budget train chase would have been. De Palma would get that checkbook-busting chance again in Mission: Impossible nearly a decade later.

History and popularity have been Brian De Palma’s crime movie achievement. The American Film Institute nominated the movie in five categories (Movies, Thrills, Hero, Villain, Film Score, and Gangster Film) during its “100 Years” series last decade. Then and now, The Untouchables earned a city’s pride and spurred new popularity to the Capone legend. Its success also fueled a star’s rise (Costner), secured another’s lasting legacy (Connery), and reminded audiences just how sharply talented its steward was. Once the end credits hit and Morricone plays us all out, you can also feel Brian De Palma channeling tough-guy Jimmy Malone with a “here endeth the lesson.”  The hitmaker never lost his edge. 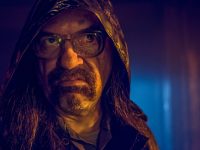