When I was going to see Pedro Almodóvar’s new film, Pain and Glory this summer, I was expecting the story with the extraordinary turns, a story told in a stylish and quirky way, I was expecting magic on the screen. But I couldn’t imagine it would turn out to be so personally important to me. It deeply resonated with what I was going through, even though the story itself had so little in common with my life.

Pain and Glory, which was released this year and premiered in Cannes, is a semi-autobiographical film by Spanish director Pedro Almodóvar. Importing real-life experiences (his own or other people’s) into his work has always been a part of Almodóvar’s style, but this film exposes his most intimate feelings, fears, love, regrets, sacrifices. I would call it a journey towards accepting the death of loved ones, endings of relationships, and mistakes, which at certain moments can be the only way to get back to life.

The protagonist, Salvador Mallo (exquisitely played by Antonio Banderas who received Cannes’ Best Actor award for this role), is a film director. Even from his appearance, it’s obvious that this character represents Almodóvar himself.

Salvador suffers from pain and a number of illnesses. It’s sometimes difficult for him to swallow even water. (Being interested in psychosomatic causes of illnesses, I couldn’t resist connecting this to the inability of ‘swallowing’ the past experiences, processing them.) Salvador lives alone in a beautifully decorated apartment, resembling a museum—as one of the characters describes it. He has been depressed for years, lately became unable to work. He’s run out of desires. Practically, what keeps him attached to life is his memories.

Pain and Glory lets the viewer follow Salvador’s inner journey into his past life. As I see it, the film has three distinct parts, telling three different stories. Each of them focuses on a different aspect of Salvador’s personality: an acclaimed film director, a lover, and a son. And the last story—epilogue—where the first desire from his childhood emerges, giving an incentive to look forward. Everything is connected by means of childhood memories: moving to another town with parents; living in a cave-like subterranean house with the opening in the ceiling from where, beyond a metal grid, a small part of the sky is visible; childish fascination with films and film stars; the school where priests were doing their best to make Salvador forget “pagan” things like The Beatles and film music.

The film begins with Salvador standing still on the bottom of the pool, submerged into the water, remembering his early childhood moments with his mother (played by the wonderful Penélope Cruz). His memories also contain water—the river in the village where his mother and their neighbors are doing the washing. The river is fluent and full of life; while the pool is still, frozen in time—and so is Salvador.

Water appears in almost all memories, somehow connecting them. It is mentioned again when we hear about Salvador’s first memories of cinema, especially the films where there was water (because of which boys had an urge to urinate and so, the smell of pee, along with jasmine and summer breeze, became forever associated for him with his childhood films.) Then water appears once again when Salvador remembers his first desire. 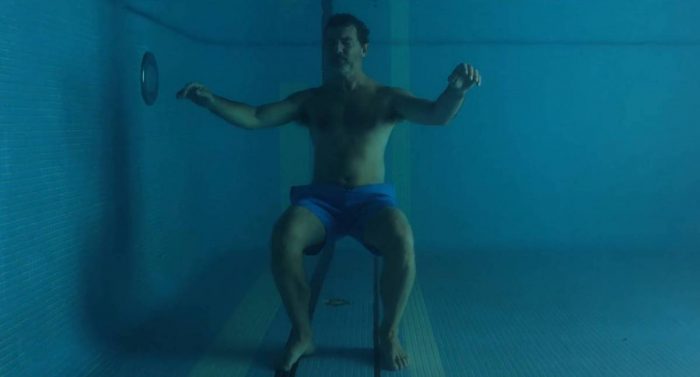 Memories of the artist

The first person on Salvador’s path to accepting the past is Alberto—the actor who 32 years ago played the leading part in his film, Taste. He’s actually forced to meet with Alberto again, in order to present the restored version of the film. It’s clear that they had lots of disagreements. They haven’t even spoken to each other since the film was finished. Though, Alberto has its poster (has Taste, as says Salvador) on the wall.

Naturally, I started wondering, who exactly is Alberto’s character based on. My guess is, it’s a combination of actors with whom Almodóvar has worked, but I couldn’t shake off the thoughts about Law of Desire and Carmen Maura.

Anyway, back to the film. Alberto is addicted to heroin and Salvador decides to try it. Now, with heroin, he can disconnect from reality, which is full of pain, and delve into the memories of the past. We later see the deep impact that addiction (though not his own) once had on Salvador’s life. It’s a sad experience which eventually comes back to life through Alberto when he offers to put Salvador’s story/memoirs named Addiction on stage.

The stage revival of the story leads to the meeting with its central figure—Salvador’s then heroin-addicted ex-lover, Federico. Salvador lost the battle against that addiction, concluding sadly that “love may move mountains, but it is not enough to save the person you love.” For Salvador, it was cinema that relieved the pain caused by the loss. In his own words, cinema has saved him.

Was the “pagan” world of cinema his own addiction? I think it was. Since his childhood, when watching the films screened on a white wall on summer nights. Anyway, that was the first time when addiction saved him.

It’s risky to say, and sounds somehow wrong, but this time heroin addiction eventually leads Salvador to the cure—through the revival of the long-ended story of his life, relieving pain and allowing him to get in touch with his memories. It feels like going through heroin addiction brought back the forgotten stories, requiring resolution. 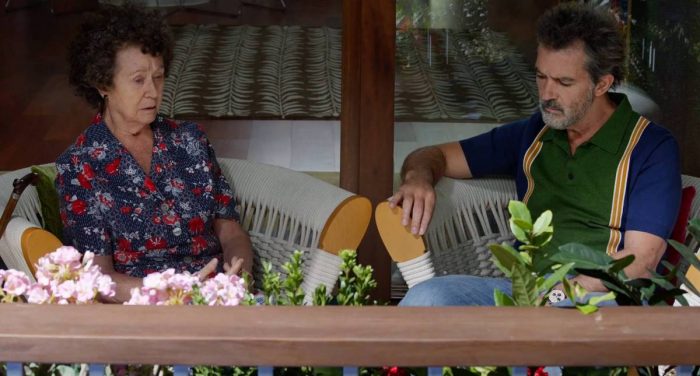 Memories of the son

The part of the film where Salvador remembers his mother is perhaps the most important. Julieta Serrano plays his mother in this part. As we know, Almodóvar has used stories involving his own mother or her neighbors from the village before, but this is the first time that he actually tells his mother’s story—or more correctly—her death story: the death that he has been unable to accept.

This part contains so many things all of us can relate to: regrets for being not exactly what she wanted him to be, for not being able to fulfill her last wish, feeling that he has failed her somehow, vulnerability and emptiness that is always left after the death of the loved ones, and perhaps most importantly, the sense of our own mortality. Two years after his mother’s death Salvador underwent spine surgery, and as he admits, has never been able to come to terms with one thing or the other. With the loss of the mother, he lost that basis, the grounding point on which he could rely. Now, with the pain in his back, he can neither rely on his own spine—the axis around which his life revolves. 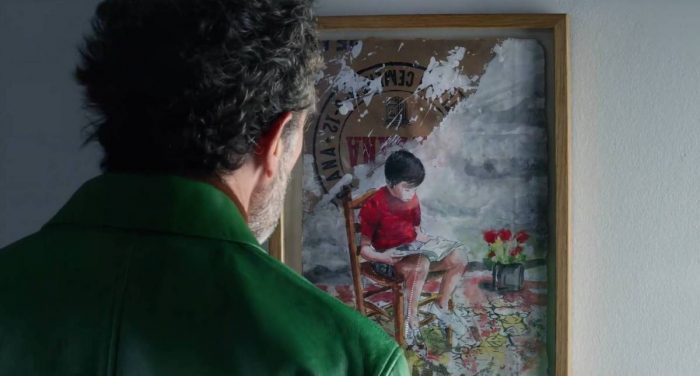 I’ve already written in my previous article about All About My Mother that Almodóvar’s works always end on an optimistic note. So does Pain and Glory. This time, it’s about finding the new lease of life. It comes, as always, unexpectedly, but requires acceptance of grief, regrets, or mistakes of the past life. In Pain and Glory it takes a form of the old painting—another memory of childhood. It reminds Salvador of his First Desire and gives a foundation on which he can build a new axis, or perhaps it would be more accurate to say it offers a window through which he can start looking at the world, after leaving the darkness in which pain had trapped him for so long. Just like his young self is watching the fireworks of the fiesta from the window of the train station in a strange town where he’s stuck with his mother.

In one scene, there is a poster of Federico Fellini’s 8 ½ on the wall. Surely, it is not coincidental—Pain and Glory has much in common with Fellini’s masterpiece. The fireworks in the final scene reminded me once again of that film, namely its carnivalesque ending. The endings of both films bear the joy of life spiced with notes of sadness. To me, it’s exactly what makes life beautiful.