The premise of Prodigal Son, Fox’s new psychological crime drama, isn’t going to blow you away with originality. However—aside from the fact that I’m a sucker for a show that examines what causes people to do the things they do—I found the opening episode of the series to be engaging, witty, and complex enough to make me want to come back for more.

Prodigal Son focuses on Malcolm Bright (Tom Payne), a criminal profiler who can solve crimes by knowing how killers think. As a man clearly with issues of his own—night terrors, hand tremors, and pills upon pills needed just to function—Malcolm is the son of a notorious New York serial killer, The Surgeon.

Arrested when Malcolm was merely a child, Dr. Martin Whitly (Michael Sheen) committed 23 murders and is locked up in solitary confinement when the Prodigal Son pilot picks up.

The father and son relationship will surely be front and center of the show. Malcolm, who uses a surname alias to disassociate himself from his blood, still displays a distinct curiosity toward his father. When Prodigal Son begins, the two haven’t seen each other for 10 years, after Malcolm revealed he applied at Quantico. But after being fired from the FBI for exhibiting some questionable behaviors (even though he was a top profiler), Malcolm quickly latches on with the NYPD and he finds himself investigating a copycat killer who is re-creating the first four of his father’s murders (known as “The Quartet”). This leads him back to his father’s new, swankier prison cell, 10 years later. 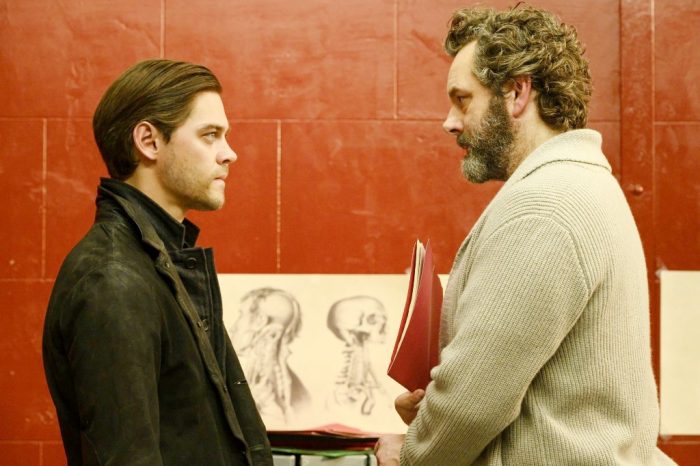 The copycat killer ends up being one of Whitly’s former patients, leading Malcolm to wonder if his father orchestrated the entire thing in order to get his son back. I think it’s safe to assume that that is indeed the case.

A show like Prodigal Son would not work if either of our two main characters weren’t interesting. Fortunately, Malcolm and Dr. Whitly are intriguing and obviously both flawed (in the makes-for-good-TV sense) characters. They both have Crazy Eyes that make you question what will be done or said next. And the relationship is complex: Malcolm would appear to have the upper hand, being a free man and all, but something about him telling his father, “Goodbye, Dr. Whitly” when he leaves the cell and his father replying “My boy” hints to me of the power Whitly will hold over his son.

In support of these strong spotlight performances, Prodigal Son appears to have a decent set of secondary characters. And in a show with such macabre subject matter, I was surprised by how well these characters were able to lighten the mood a bit—and even provide a few laughs. Fellow cops JT Tarmel (Frank Harts) and Dani Powell (Aurora Perrineau) had some quality one-liners (e.g., JT sarcastically hypothesizing that Malcolm is the copycat killer they’re hunting due to his bizarre behavior).

Gil Arroyo (Lou Diamond Phillips) also should bring an interesting dynamic to Prodigal Son. Revealed as the police officer who arrested Dr. Whitly, Gil has meaningful history with Malcolm. But will Malcolm ever betray him? It’s clear Whitly is able to influence his son. Will he be able to use Malcolm in some sort of revenge plot against Gil? This should be interesting to monitor going forward.

I was struck early and often with similarities between Prodigal Son and the fantastic NBC series Hannibal. The main premise of both shows is almost entirely identical, in which the central character is able to assess a crime scene and climb into the killer’s mindset in order to solve the case.

Hannibal’s Will Graham (Hugh Dancy) and Dr. Hannibal Lecter (Mads Mikkelsen) weren’t father and son, but the two definitely form a strong bond despite technically being enemies. I’m not going to view this commonality as a complaint for now. I loved Hannibal. If Prodigal Son is going to borrow aspects of that show, I’m OK with it—as long as it can distinguish itself in other ways. So far, Prodigal Son seems to be less psychedelic and include a little more humor to offset the show’s dark subject matter. I’m interested to see how much the paths of these two show diverge.

I also got a bit of a Dexter vibe at one point, after Malcolm saved Nico Stavros’ life by cutting off the man’s hand because he was chained to a bomb. The hand was stored in a cooler with some ice, and as Malcolm walks off clutching the cooler, we see a look of almost exhilaration on his face. Was it necessary to chop off Nico’s hand? Or was this simply a dark side of Malcolm overflowing out into the open?

I think Prodigal Son has some decent potential. If the pilot was any indication, the show will be able to produce some solid “case of the week” material. But I think it will truly be able to shine with its use of flashback. What happened in the 10 years in which Malcolm was cut off from his father? What happened between the two before Dr. Whitly’s arrest? What made Malcolm report his father to the police? Does the doctor hold that against his son?

The pilot episode of Prodigal Son featured a great mix of psychological horror, suspense, and surprising humor. If going forward the show can find a way to honor the Hannibals and Dexters while creating its own slice of the psychological mystery-thriller pie, this could be a very enjoyable show to watch week after week.