This article is now available on Audio, read by the author, Myles Hughes, exclusively for our Patreon supporters. For just $3 a month you will have access to our full library of Audio content, plus three new uploads every week. To sign up visit our Patreon page: https://www.patreon.com/25YL

Last month saw the release of André Øvredal’s Scary Stories to Tell in the Dark, which adapts a popular anthology series often cited in the same breath as Goosebumps when fans of a certain age talk about the books that initially got them into reading horror fiction. By that same token, critics have rightfully praised the film version as an excellent gateway horror film, in that it serves as a stepping stone for those who haven’t seen very many scary movies and would like to get their feet wet before progressing to more iconic or intense genre entries (see also: Jaws, Gremlins, The Monster Squad, Krampus, and much of Tim Burton’s early filmography).

As a late-blooming horror fan, the concept of gateway horror films has always held significance for me. I was exposed to The Ring and Child’s Play much too early, and subsequently steered clear of all things horror for a number of years. Ironically, I would now consider both of those films to be perfect entry points for the genre if seen at the appropriate age. Yet despite my trepidation to actually watch any of them, the concept of horror films still held a certain allure for me.

How I Found My Way To Horror 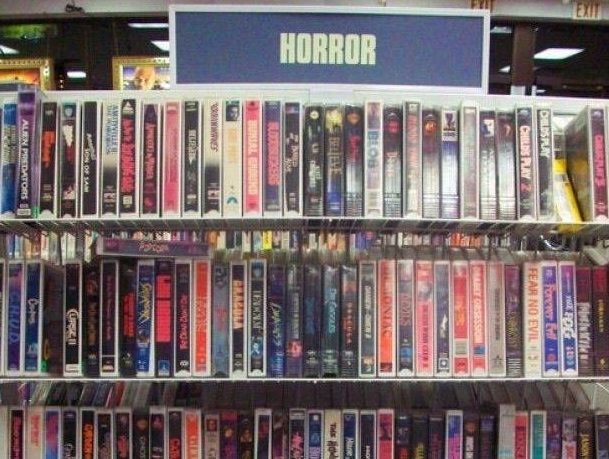 One of the things I miss the most about the Blockbuster era was the ability to just wander the aisles of your local video store and soak in all the box art. You could get a crash course in an entire franchise just by browsing through the relevant entries and skimming through the plot synopsis on the back (technically you can do the same thing on IMDb or Wikipedia now, but it’s just not the same). This was how I gained an initial understanding of every series from Halloween to Hellraiser, and it was those iconic slasher villains that locked in my fascination. Clearly these characters must be interesting enough to warrant so many sequels, and the titles alone indicated that they appeared to evolve and go on exciting new adventures with each installment. (You’re telling me Leprechaun went to space and then to Tha Hood? What an interesting fellow!)

Even through this admittedly scattershot introduction to many of horror’s most recognizable faces, it was clear that the top dogs of this arena were the respective “protagonists” of A Nightmare on Elm Street and Friday the 13th. Which is why, in 2003, right when I was hitting the age where I felt like I could give these scary stories another shot, I found my ideal gateway horror film: Freddy vs. Jason. Despite my limited knowledge, I could tell that this match-up was an event. From the posters to the trailers hyping up their brawl like a wrestling promo from hell, this felt like the kind of action-horror medley that could finally serve as my entry point into these already dense franchises. So, I mustered up all the conviction that my 13-year-old self was capable of and asked my parents if they would take me to see it.

They said no, and since at the time I hadn’t a rebellious bone in my body, that was that. But I kept it on my radar, undeterred by middling reviews and general bad buzz from fans who had been with these franchises from the beginning. And when it finally hit DVD, I had generated enough goodwill to convince my parents to allow me to rent it. They reluctantly acquiesced, conceding that at least this way they wouldn’t have to watch it themselves. I braced myself accordingly and sat down to finally indoctrinate myself into this world of nightmares and psycho killers.

Let’s Talk About The Film 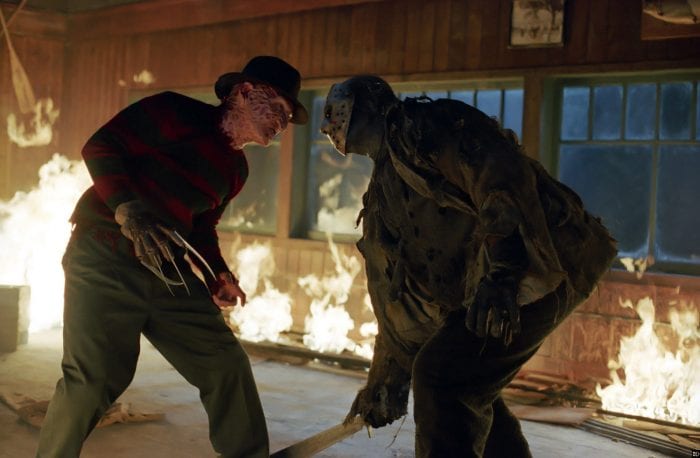 And you know what? I absolutely loved it. Here were two distinctly iconic titans of terror arriving fully formed, their backstories and modus operandi clearly laid out in the opening sequence, going through the motions of an otherwise standard slasher movie plot en route to a brutal showdown containing more blood and dismemberment than I had realized was even possible to depict on film. My initial misgivings that I wouldn’t be able to follow along without having consumed their 17 combined previous films were unfounded: this was a standalone story that leaned into what made each character distinctive and frightening (admittedly in a heavily summarized kind of way), perfectly accessible for newcomers while celebrating what made them infamous in the first place.

Considering that the film inspired me to go through all of Freddy and Jason’s previous works, the notion of it serving as a gateway horror film is apt (despite it being a touch gorier than films usually carrying that descriptor). Of course, as I’ve since binged through the aforementioned previous films, I’m now able to understand the backlash that the film received. The obligatory teen drama and predictable plot beats leading up to the title fight leave much to be desired, and the continuity established in the preceding entries isn’t always recognized (Elm Street appears to have undergone some major renovations following the ghost town that we see in Freddy’s Dead, and Jason has developed a newfound aversion to water that doesn’t really jive with anything we see in his earlier films).

If you grew up with those earlier films, and had been anticipating this crossover event for longer than the Marvel Cinematic Universe has existed, I can definitely see how you would be disappointed with the end result. Dustin McNeill’s comprehensive nonfiction book Slash of the Titans: The Road to Freddy vs Jason details the numerous attempts by screenwriters to figure out how to bring these properties together, many of which involved cults worshipping one or both characters and generally seemed like they were overthinking the task at hand. 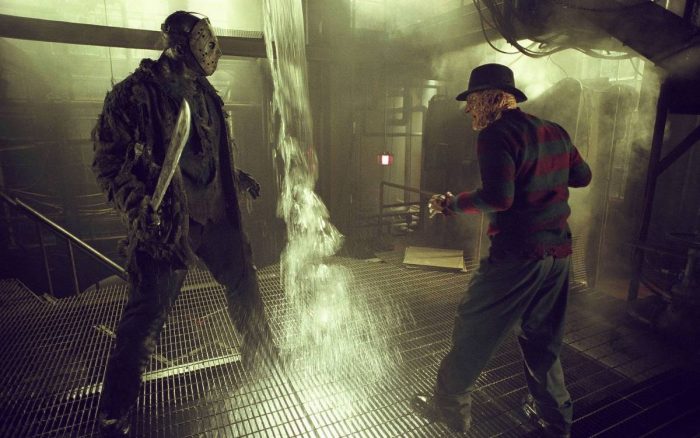 What works about the film we got is that the setup isn’t overly convoluted. Freddy and Jason are both in some level of Hell following their previous defeats, and Freddy engineers Jason’s resurrection in order to get him to start killing the teens of Elm Street, so that the locals will believe Freddy has returned, and their fear will give him the power to come back and actually kill again. But when Jason gets a bit carried away, as is his wont (historically he has a significantly higher kill count than Freddy, who prefers to butter up his victims before dispatching them), then Freddy decides he needs to cut out the competition, thus setting the stage for their grudge match.

A leads to B leads to C. It’s cheap, dirty, and gets the job done. There are some subplots involving the mysterious death of the main girl’s mother (don’t pretend you remember her name either) and the return of Hypnocil from Nightmare on Elm Street 3, but otherwise everything is nice and straightforward. The characters’ iconography speaks for itself. And in a world where many of these slasher franchises have entered the double digits, iconography is everything.

There have been similar attempts to match up big screen legends over the years: everything from King Kong vs. Godzilla (which is getting a remake of sorts next year) to Alien vs. Predator (a sanitized cash grab with an even worse sequel) to Batman v Superman (the less said about that dumpster fire, the better). These films all lack Freddy vs. Jason’s sense of fun and excitement at how awesome it is to finally see these two classic monsters face off. Director Ronny Yu (Fearless) directs the action with an over-the-top flair that thankfully doesn’t take itself too seriously, and while the ending does leave room for a potential sequel (as per slasher tradition), the film as a whole doesn’t get bogged down in copious world-building because the world has already been built.

The Importance of Iconography

I didn’t invoke the Marvel Cinematic Universe earlier for no reason. Those are films, like Freddy vs. Jason, that understand the value of iconography. The characters’ distinctive looks and personalities are what people remember when the story specifics and bland supporting characters have faded away. That’s what gets imprinted on the merchandise and gets referenced in memes. And for horror fans, slasher villains are absolutely as iconic as superheroes. We’re not going to the latest installment of our favorite franchise for the standard grab bag of annoying teens. We’re going to see Freddy and Jason, Michael and Leatherface, Chucky and Pinhead, Jigsaw and Pennywise.

And the sad thing is, many of these franchises have either ended or sputtered out. Freddy and Jason themselves haven’t been seen in theaters since their respective remakes, neither of which garnered enough interest to justify a direct sequel. The only one of the classic slasher series who’s enjoying any kind of tangible success right now is Halloween, and that’s a very recent state of affairs. For most of these icons of the genre, their best work is most likely behind them. And for the young aspiring horror fan who’s seen these characters on T-shirts and referenced in pop culture ad nauseum yet doesn’t know how to get started in going through their extensive filmographies, there are far worse places to get started than Freddy vs. Jason.

Recent enough to not feel quite as dated as the original entries, yet old enough that it still features the original incarnations of the characters (indeed, this would be Robert Englund’s final indelible turn as the Springwood slasher), it’s an ideal gateway horror film. It’s also a perfect nexus point between horror’s heyday of dominating the box office and the modern fascination with franchise crossovers that’s been primarily dominated by comic book properties. The horror genre is multifaceted and extends in countless directions, but if you’re looking to get acquainted with some of the famous faces that once defined it, then this is where I recommend you start. Or at least that’s how I did it.

See you on the other side.

Myles Hughes is a writer, actor, and independent filmmaker. A lifelong cinephile and a self-proclaimed dork, his fiery passion for movies and things that go bump in the night knows no bounds. He currently resides in Florida, but don't hold that against him.