If you were a sci-fi fan in the early ’90s then you were fairly ill-served by the cinema. The kind of sci-fi that Star Wars (1977) had given rise to was pretty much out of vogue thanks to a string of high profile flops aimed at the family audience. The Back to the Future (1985) sequels had been well received and done okay, but thanks to the ongoing popularity of Arnold Schwarzenegger and a certain xenomorph, science fiction heavily tinged with horror and action geared towards the adult audience was very much the order of the day. Anything with a traditional adventure slant and a sense of wonder was not what Hollywood was making.

It was with a certain amount of trepidation that the production of Stargate (1994) was announced with Universal Soldier (1992) director Roland Emmerich at the helm. The film was financed by many separate companies, some based in Europe, and at the time the news that star Kurt Russell was paid seven million for his services raised a certain amount of quizzical eyebrows. The financing background to the film gives you some idea how far away studios were from this kind of optimistic adventure tale, and the budget was only a modest 55 million overall. This was the first film that Emmerich made with his writing partner Dean Devlin (Independence Day 1996) and they would go on to have a bigger hit two years later, and then crash and burn with Godzilla (1998). Aside from Russell, the film also had James Spader (The Blacklist) in the co-lead and the then-hot (thanks to The Crying Game), reportedly volatile, and soon-to-disappear Jaye Davidson as the villain.

When the trailer was released for the film in 1994, it revealed something that audiences had been lacking. There was a plot which harkened back to the likes of Raiders of the Lost Ark (1981) but had flying starships from Star Wars, and some kind of alien encounter not seen since Close Encounters of the Third Kind (1977). People became somewhat excited and remembered something they thought lost as those too young to see Demolition Man (1993) in cinemas caught up with its R-rated charms on video. It was kind of a surprise—but at the same time not—when Stargate became a genuine hit when released in October of 1994, grossing a total of 71 million at the US box office and then almost 200 million worldwide. That might not seem like big pennies now, but consider this was twenty-five years ago, and the biggest hit of the year was The Lion King with over 400 million worldwide. Stargate actually made a considerable profit and was a gamble that paid off.

Looking back, I think a great deal of Stargate’s success was because audiences were starved of this kind of thing by 1994. Here was a film that finally parents could take their children to with its family friendly rating. The actual film itself is in fact deeply flawed, but has enough charm in it and just the right level of action and violence that meant that people lined up in droves.

The plot of Stargate concerns an Egyptologist with wacky theories named Daniel Jackson (Spader) who is recruited by the US military to assist in translations to open up the titular stargate device found in the prologue in 1928. United with the haunted Colonel Jack O’Neill (Russell) they open up the device and travel through a portal to another world. This alternate world very much resembles Egypt in a time of pyramids and apparently absent gods. Of course then thanks to the gate being re-opened, the alien god Ra (Davidson) returns and makes his displeasure known. 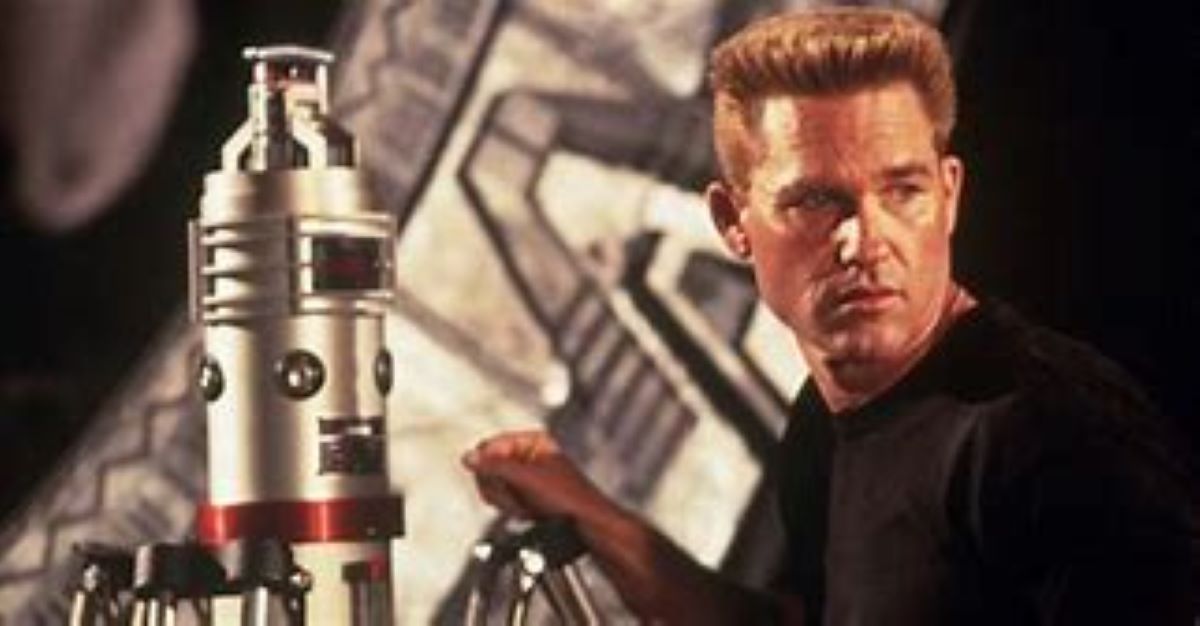 There are moments of genuine excellence in Stargate that keep me returning to the film every now and then. Russell and Spader make a great pairing, Russell is doing his swaggering action hero thing, and Spader—not playing a creep for once—is a very likeable nerd. Seeing the film in the cinema for the first time back then kept me wide-eyed with wonder at what visual trick they were going to pull off next. When a gigantic pyramid mothership lands and its inhabitants attack from the shadows, I was in absolute heaven. It was a film that was bringing back memories of all my childhood favourites in exactly the right ways. It had a truly despicable villain, it had downtrodden masses rebelling against their oppressive creator, and thanks to its Egyptian history iconography mixed with sci-fi tropes, it was something we definitely hadn’t seen before.

Now the film is not perfect. Even on that first viewing way back when it was clear that there was a pacing issue. When the crew first journey through the gate, things slow right down as the team investigates their immediate area, and it feels like an age before the aliens arrive. When you actually step back and think about it, the film all just takes place kind of between a pyramid and a village over a sand dune. They achieve an epic sweep to the whole thing, but the world isn’t really explored all that much. Probably due to the relatively medium-level budget more than anything. There is also a lack of development in the female lead played by Mili Avital, a character seemingly there just to be there with not much in the way of substance. It’s still really hard not to get caught up in the adventure though, thanks to David Arnold’s great score, and the pulse-pounding last half hour.

Walking out of Stargate I never felt less than satisfied, and I dreamed of what new worlds and possibilities there were to be explored in what was going to be the sci-fi franchise for the ’90s. This was going to be a whole new generations Star Wars. Roland Emmerich and Dean Devlin even envisioned Stargate to be the first part of a trilogy of films, but then something happened…

Due to complications to do with where all the money came from, and the collapse of studio Carolco thanks to the flops Cutthroat Island and Showgirls in 1995, the rights ended up in the hands of MGM, a studio that wasn’t doing all that well itself at the time either. MGM was not keen on any ideas that Emmerich and Devlin had, and so Stargate was developed into a TV franchise which debuted in 1997 in Stargate SG-1 and ran for ten seasons with multiple spin-offs and even an animated show.

Now I have never seen an episode of Stargate SG-1. My disappointment in not getting the further cinema installments I expected has always kept me away from it. I understand it has many fans and the fact they went to Atlantis in the show eventually just makes it all that more bitter for me. Devlin has stated that the second film in the trilogy would have taken us twelve years after the original and the discovery of a new gate that then led to a new mythology other than the Egyptian one from the first. The third film would have then tied both films together with a new strand we hadn’t seen previously. Even beyond this Emmerich and Devlin envisioned further films completely unrelated from the direction they went with it on TV. It just goes to show you how much times change. You talk “trilogy” now and Hollywood has dollar signs in its eyes. Back in the ’90s and with financing all over the place, despite a genuine hit film, studios still wanted the relative safety of TV. Thanks to Stargate SG-1‘s popularity you could say that this strategy paid off, but I can’t help wondering what might have been.

There is an outside chance that Stargate could one day come back to cinemas. Hollywood is big on proven properties with good track records now rather than originality. In 2013 it was announced that Emmerich and MGM were planning a reboot of the franchise into cinemas and then writers were announced for this in 2014 and Warner Bros were partnering with MGM on the film. Sadly by 2016 it was revealed that the plans for this had stalled, and the film is languishing in development hell. Thanks to the poor commercial and critical reception of Independence Day: Resurgence (2016) it now feels that the dream of the cinematic Stargate franchise trilogy is pretty much dead. You never know I guess, in this endless cycle of recycled nostalgia and property, Stargate seems too rich with potential to never see the big screen again.