Over the past few months, the weekly dive into sci-fi television episodes has seen shows such as The X-Files, Twilight Zone, and Doctor Who. Each of these is a fantastic science-fiction piece that are ripe with analysis. This week, I am going to switch it up a little bit. Out of all the sci-fi shows on television, one of the most overlooked and underappreciated (in my opinion) is Futurama. The animated series ran from 1999 all the way to 2013, with various cancellations and relocations, for a total of ten seasons. In those ten seasons, there are absurdly funny episodes, as well as surprisingly smart ones too. And as far as science-fiction, no show blends those two terms together better.

We will be dissecting the episode, “Roswell That Ends Well,” (Season 3, Episode 19) an episode about time travel and the grandfather paradox. While many of Futurama’s episodes are silly and just plain funny, this is one episode that received widespread acclaim for both the humor and the science behind the adventure. In the episode, main characters Fry, Leela, Bender and the rest of the gang are transported back to 1947, and things go incredibly awry. In this Futurama episode, Fry explores the trouble that is the “grandfather paradox,” all while revisiting an era of nuclear testing and aliens from outer space; ironic, isn’t it? 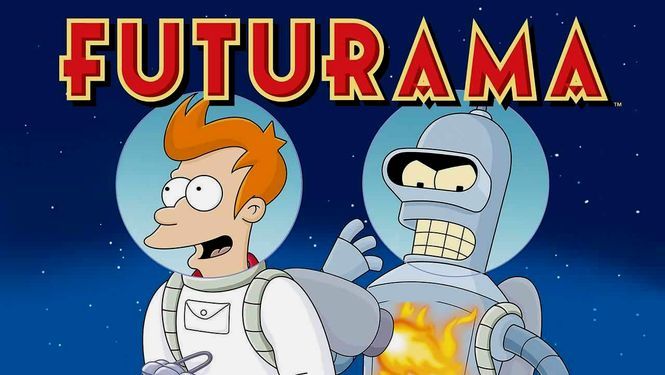 In “Roswell That Ends Well,” the Planet Express crew is sent back in time to 1947. While out on a mission in their own time, Fry happens to pop some popcorn in the ship’s microwave while the are passing a supernova. For whatever reason, this caused a reaction between “the gravitons and graviolis,” sending the ship back over a thousand years to the year 1947. Because there was no GPS at that time, the Planet Express Ship careens out of control and crash lands near the military base in Roswell, New Mexico. In all of the commotion, Bender is jettisoned from the ship and ends up in a bunch of pieces, Zoidberg is left behind and taken by the U.S. government for dissection, and the rest of the crew (including Bender’s disembodied head) set off to look for the rest of his pieces.

In order to get back to their time, the crew needs to use the microwave that Fry previously used. Unfortunately, it’s broken. The crew sets off to find a substitute, which ends up being a military microwave antenna. Meanwhile, it is discovered that Fry’s grandfather, Enos, is actually stationed at the base. Professor Farnsworth warns Fry not to go anywhere near him, lest he cause his grandfather’s death, resulting in Fry ceasing to exist. Naturally, instead of heeding the Professors warning, Fry does everything he can to make sure Enos meets his grandmother Mildred, get married and have children. This is what sets in motion the grandfather paradox that occurs later in the episode. 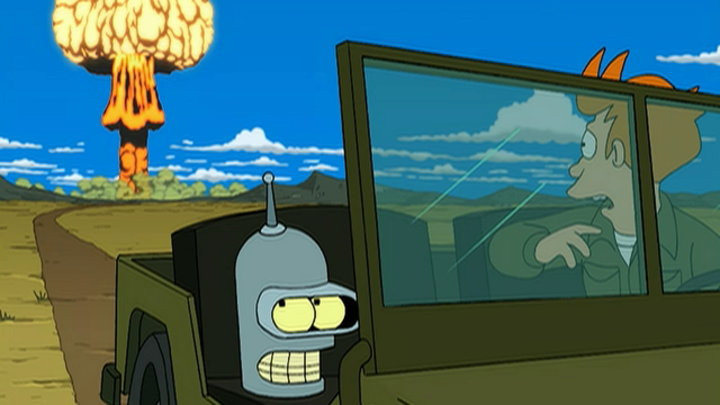 While trying to protect his grandfather Enos from any harm, Fry ends up leaving him an empty house in the middle of the desert. Of course, this is the house that ends up obliterated by a nuclear weapons test, and Enos is killed while Fry watches on in horror. Seeing nothing else better to do, he consoles Enos’s would-be wife, Mildred. Seeing as how Fry is still existing even though his grandfather has died, Fry believes that Enos must not have been his grandfather after all. After sleeping with Mildred, Fry meets back up with the rest of his crew. They then explain to him that Mildred is indeed his grandmother, and his sleeping with her (and resulting pregnancy) makes Fry his own grandfather.

With time running out, Fry, Leela, and the Professor hurry to gather the parts they need before they miss their chance to return home. They throw caution to the wind and risk being seen by everyone at the base, grab the microwave antenna, grab Zoidberg before he is tested on and grab all of Bender’s pieces. As the crew zaps back to their own time, Bender’s head falls off the ship and gets stuck in 1947. While lamenting his loss, Fry realizes that Bender’s head is likely where they left it a thousand years ago. After returning to the site, the crew finds Bender’s head and places it back on his body, ending the episode.

Like I said at the beginning, this episode of Futurama received tons of praise for its tackling of the grandfather paradox, as well as being one of the funniest episodes the show has ever been. While Futurama goes on to have many more episodes that are grounded in science fact, this early episode is one that proves a difficult topic can be explained in an easy manner and be very funny at the same time. While the half-hour episodes aren’t as filling as X-Files or Twilight Zone episodes, they still pack an emotional punch. “Roswell That Ends Well” is no exception, and it makes its presence known right away. 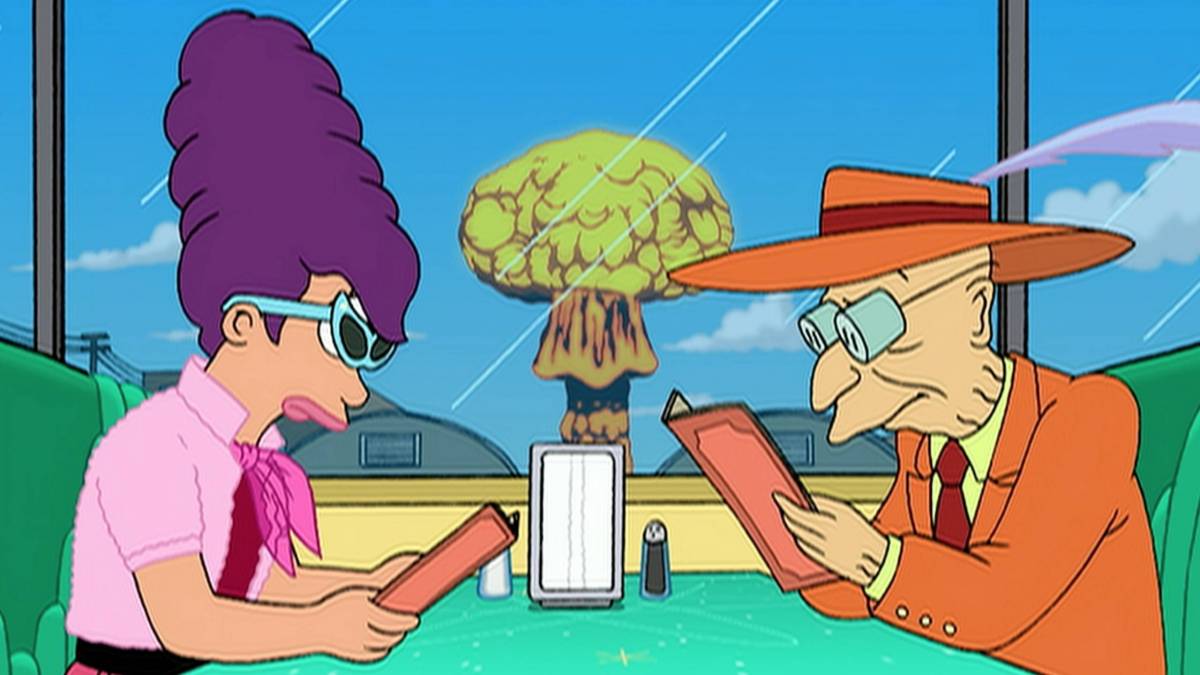 The grandfather paradox is not something new to movies and television. Everything from Back To The Future to The Terminator has used some form of a time travel paradox. In fact, the grandfather paradox does not explicitly mean it involves one’s relatives; it just has to do with the altering of the past and any changes that it may cause in the future. As a matter of fact, this Futurama episode is likely the only show or movie to make the grandfather paradox as literal as they do.

What Futurama does with the grandfather paradox is actually truly interesting as well. Leading up to the climax of the episode, you get all the traditional elements of a time-travel plotline, albeit a little backward. While most of the crew is trying to avoid intermingling with the people of the past, Fry is doing everything he can to get in his grandfather’s way and make sure he does what history entails. Moreover, Fry’s acts are hilarious in how preposterous they are. Like the paradox says, any involvement with the past could be life-altering. Seeing the hilarity of Fry’s immediate worries with his grandfather and his ultimate failure make it the perfect lead up to the climax, where we learn that Fry is his own grandfather. Talk about weird!

As a matter of fact, Fry’s decision to sleep with his grandmother and become his own grandfather is bound in actual philosophical implication. One common explanation of the grandfather paradox is as follows:

Philosopher Norman Swartz contends that anyone presented with the situation to change the past will always act in such a manner that will ultimately keep the past the way it originally was. By coming full circle (so to speak), we can avoid logical conflict and bring an understanding to a paradoxical situation. 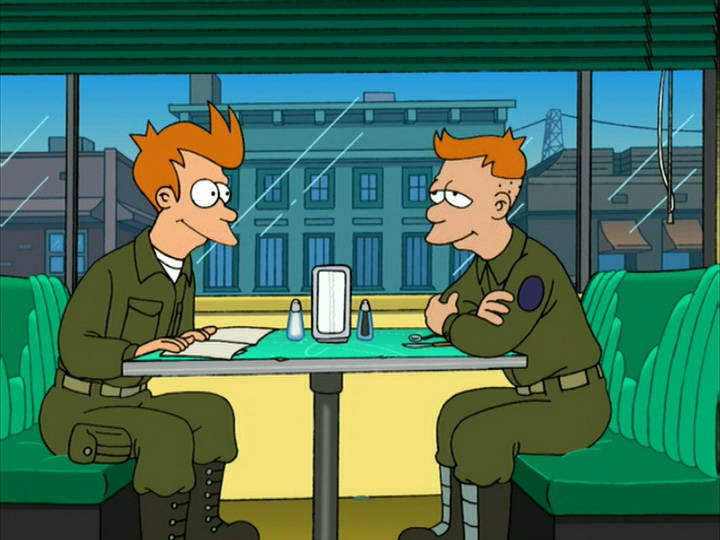 So, in relation to the show, Fry actually acts in a way that is not just logical, but logically probable! Fry was doing everything he could to ensure his continuing existence and fulfilled that mission without even trying. Just like Schwartz said, Fry contributed to the situation exactly what history entailed, even though no one could see it at the time. Thus, we have come full circle in terms of the grandfather paradox, bringing the actual paradox into the show. Moreover, the implication that Fry does exactly what he was supposed to do brings even more scientific theories into play (which we will not go into, to avoid making this even more confusing)!

So while “Roswell That Ends Well” is a fantastic episode without the basis in science fact, the theories that back up the episode make the whole ordeal surprisingly plausible. Futurama is a marvel, and every time I watch episodes like these I am astounded at how much thought and effort is put into the plots and issues. In future discussions, we will look at the math the show put into a money problem, or how one episode actually helped publish a scientific paper! But in “Roswell That Ends Well,” the grandfather paradox was at the forefront, and it made for one of Futurama’s best episodes. And even though the audience had no idea what was going on, they were witnessing perhaps the most logical solution to a time travel paradox on television. And it was all from an animated adult comedy, from the creator of The Simpsons.