Kevin: What about you? You don’t have any needs?

As a recovering pop culture snob, I’m so happy about 27 Dresses being my contribution to the Guilt-free Pleasure series. I grew out of my snobbery with time, like all my other ridiculous phases—trying to learn elvish, wanting to be a songwriter, wanting to be a herpetologist despite my crippling phobia of snakes. When I came out the other side, through accepting my love of pop culture in all of its most ridiculous forms, I became a much healthier and happier person.

We all have our pretentious phases after all.

I’m taking this as an opportunity to celebrate those films that you watch on a cold, Sunday afternoon when you feel lonely and sad, and homesick. Romantic comedies, I mean. Let’s talk about romantic comedies.

It’s no coincidence that 27 Dresses is not the only rom-com on this list of “Guiltless Pleasures”. Like all things marketed towards women, romantic comedies are seen as far less interesting, far less worthy films than, say, an action movie. But that’s ridiculous. Friends With Benefits is just as realistic as Fast Five, if not more so.

This isn’t anything against Fast Five—I think we can all agree it’s the apex of action movie filmmaking, but rather why don’t we talk about the apex of romantic comedies?

Somehow, even when talking about genres denigrated by audiences, seen as lowest-common-denominator entertainment, romantic comedies fall even behind horror, car movies, and science fiction.

It doesn’t take a genius to discern that a large part of that is because women are seen as a “special audience” rather than over half of the cinema-going population, and movies centering their concerns aren’t prioritised by studios. I wonder why.

In a way, 27 Dresses directly deals with these concerns. Katherine Heigl’s Jane (I still can’t fathom that we live in a world where Katherine Heigl can play the Not Hot Sister, but whatever) is constantly put down for lacking in self-esteem, for prioritising her friendships and commitments to others above her own self-care, and even her own dignity.

And yet she also feels terrible for focussing on her career, and is made to lie and cheat and grift for her sister, because that’s just her duty. That’s what sisters do.

It’s a complete trap, of course. Damned as weak if she admits she wants romance, damned as a cold, unfeeling spinster if she focusses on herself instead. Being a woman is fun. 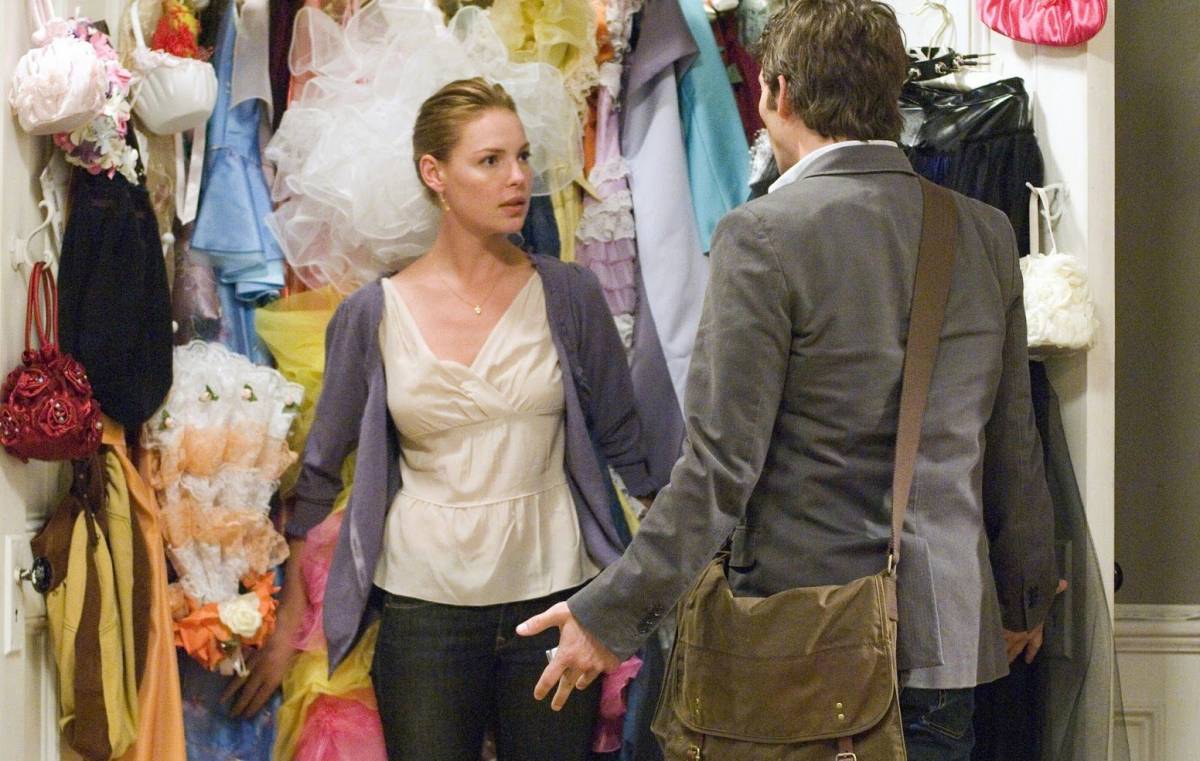 However, let’s go back a bit. I watch this movie whenever I feel remotely sad—it’s funny, and sweet, and utterly escapist, but I shouldn’t assume that everyone else is as absurdly familiar with this movie as I am.

Jane is a personal assistant in New York (of course), to George, a hot philanthropist who…is good looking, rich, and seems pleasant enough. Jane herself is charming, capable, and perhaps the most Virgo person on the entire planet—her main hobby is organising, planning, and attending other people’s weddings as a bridesmaid. Not only that, but she’s good at it. So of course she’s in love with her boss, and of course her boss falls head of hells in love with her hot little sister Tess, and of course, she’s “asked” to plan their wedding.

But don’t worry Jane, because Kevin (James Marsden) is on the way! Now, as someone played by James Marsden, this guy is absurdly hot. He’s also a journalist who specialises in writing up weddings for the New York Times (or similar), and he volunteers to cover Tess and George’s wedding, mainly so he can meet Jane and ask her about her ridiculous levels of investment in what seems like every wedding in New York.

Despite the fact that Kevin is kind of a cynical asshole, he also seems fun. He never laughs at Jane, or puts down the effort that she puts into making sure each wedding goes off without a hitch. Instead, he’s genuinely curious about her motivations, about what she gets out of the experience.

There are echoes of When Harry Met Sally when they go to compile a registry at the department store; all the absurd materialism of a wedding on display, but 27 Dresses is at its most charming when it basks in its core concept—why do we care about weddings?

Of course, the scene where Jane shows Kevin all 27 of her previous bridesmaid dresses is the film’s central thesis statement—that weddings are ridiculous, and over-expensive, and wasteful, and sexist, and extremely fun celebrations of love and romance, but the scene I think about most often is ‘the bar scene’.

Every romantic comedy has to have that scene at the climax of the second act where the central couple finally admit that their bickering is more about them wanting to have sex than anything else, and the bar scene is that moment for 27 Dresses.

It has all you can possibly want from this particular variety of scene—a car crash in the rain, entering a shitty dive bar soaking wet, heartfelt revelations and, most importantly, our leads dancing on a bar, drunk off their asses, belting out incorrect Elton John lyrics. It’s framed a lot like an overly-casual, super fun wedding reception. And if this movie can be said to be “about” anything, it’s about finding that Something Real at the heart of all the artifice and materialism associated with weddings.

That’s what both Jane and Kevin like the most about the weddings they attend, that’s what they’re both looking for—the movie is reminding us why we like attending weddings at all. They’re celebrations of love, and family, and romance. They’re chances to see old friends and support them as they take a big step in their lives, they’re huge parties, and sometimes they have an open bar. That sense of fun is what comes through in that scene, and if you don’t laugh when Katherine Heigl sings about Benny’s “electric boobs” in James Marsden’s face, then that’s more of a problem with you than the movie.

27 Dresses wants to charm you for a couple of hours with a nice story about ridiculously hot people falling in love. But it is also about a woman who only finds happiness after she learns how to balance her desire to help her friends, with her need to also look after herself. The scene where Tess reveals that she’d had their dead mother’s wedding dress cut up into something more “modern” is honestly heartbreaking. It’s not about the dress, but rather the gap between the sisters and their priorities—Tess being fundamentally selfish and short-sighted, Jane being self-sacrificing to the point of frustrating martyrdom.

And that’s the point, because the movie then follows up with Jane revealing all of Tess’ mistakes and failings at her wedding rehearsal dinner. Some of those failings definitely deserved an airing; her repeated lies, and the way she took advantage of George’s naivety to make herself into someone he’d want are definitely things to know about a person before you are legally bound to them. Other “failings” of Tess’? Not so much. It’s a cruel scene of petty slut-shaming and jealousy, and it’s treated as such by everyone in the movie.

It’s not Jane’s moment of triumph, it’s her wake-up call that finding a balance between her self-inflicted martyrdom and cruel selfishness is the only way to get her out of the mess she’s in.

I’ve written before on this site about romcoms, multiple times now in fact, and a statement that I stand by is that, by their nature, romantic comedies are fundamentally concerned with women’s agency. That’s what 27 Dresses brings to the forefront. George and, to a lesser extent, Kevin, are very much there as catalysts for Jane’s own development. It’s not just that the power was in Jane all along to improve her life, it’s that she has to learn how to use that power responsibly, and determine for herself what that “better life” will look like.

27 Dresses is a delightfully charming movie, and one that is as comforting as anyone could ever need, but I do think that it matters more than that. It’s a case-study in the paradox of (white, middle class, heterosexual) womanhood; that you’re supposed to both desire romance and marriage, but not actively seek it. That caring for others and helping them is worthy, womanly work, but do it too much and you’re weak.

To be honest, the movie doesn’t present a solution to this paradox, but it does prove that the “way out” isn’t to blindly reject all aspects of that brand of femininity, that this type of warmth and kindness is worth it for its own sake, but also that it ripples out, and results in people being there for you, too. It’s not a big or important movie, but it is a lovely one, and maybe, like Jane, deserves a lot more respect than is commonly sent its way.