One of the best things about the world of new media we find ourselves in is the fact it seems to keep the great B movie directors of our time gainfully employed. Thanks to Netflix, Jeremy Saulnier (Hold the Dark 2018) Mike Flanagan (Geralds Game 2018) and Joe Lynch (Point Blank 2019) have all had relatively high profile releases on the streaming giant, when they would have struggled to get financing and a cinema release without the Netflix model. We also have new films on the way from Vincenzo Natali (Cube 1997), and Joe Carnahan (Smokin’ Aces 2006) to get excited about in the future. So next up at bat for streaming cinema is director Jim Mickle.

After making a no-budget debut with Mulberry Street (2006), Mickle brought us the cult vampire apocalypse with Stakeland (2010). Following this, we got his superior remake of We Are What We Are (2013) and then the underrated Joe Lansdale adaptation Cold in July (2014). Mickle then took a brief sojourn into TV with another underrated Lansdale adaptation and three seasons of southern noir Hap and Leonard. In the Shadow of the Moon is his latest film, and is his most polished effort to date even if the actual end results are not all that rewarding.

The story begins with a brief view of some apocalyptic destruction in 2024 and then moves back to 1988. Here we meet Lockwood (Boyd Holbrook, Narcos) and Maddox (Bokeem Woodbine) two beat cops who discover a bizarre series of murders where the victims seem to have some kind of brain-melting incident with three puncture wounds in the back of the neck the only clue as to what is causing this. Lockwood eventually chases the suspect down, a woman in a blue hoodie (Cleopatra Coleman) who seems to have some kind of mysterious mission and hints at events that haven’t happened yet. During a confrontation on a train platform, the woman falls under a train, and it seems that the case is closed. 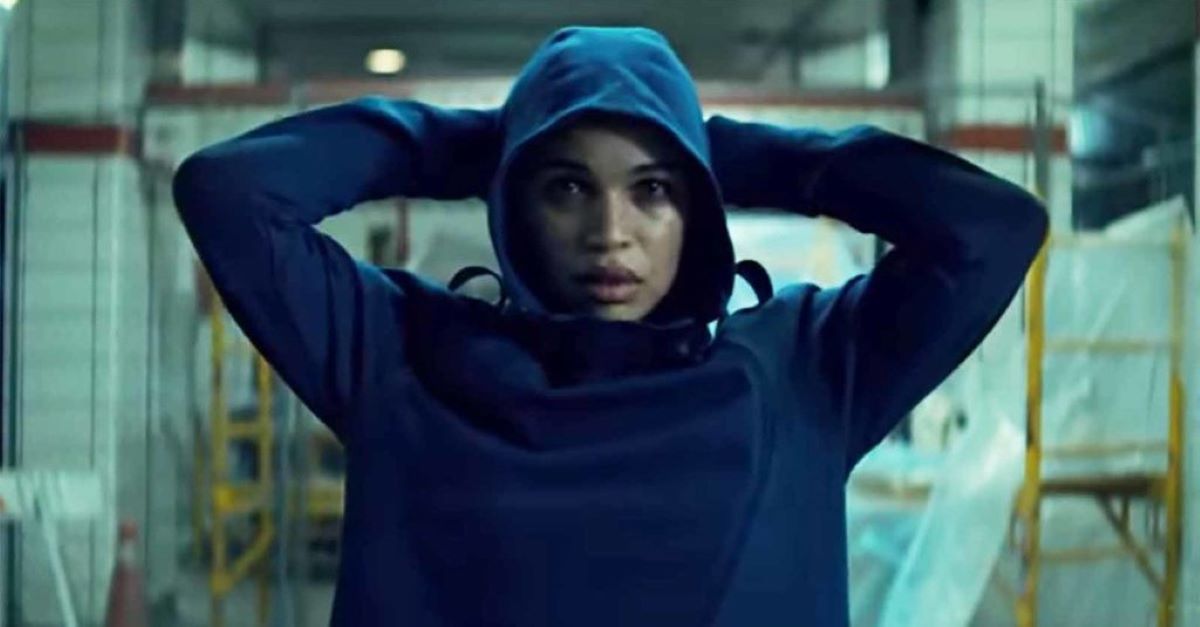 Nine years later in 1997, Lockwood has lost his wife and has a fraught relationship with his daughter and brother in law and boss Lieutenant Holt (Michael C.Hall, Dexter).The mysterious deaths start again, and the same suspect from 1988 seems alive and well and carrying on her strange mission. Lockwood comes close to the answers but loses the suspect again as well as his partner during the pursuit. We then move forward another nine years and Lockwood is obsessed with the case and increasingly deranged as he loses and alienates all those he cares about.

I think the most important thing you need to understand about In the Shadow of the Moon is that ultimately, if the true test of a film is whether it entertains, then the answer is a big fat yes. The structure of the film, with it moving forward in time in nine-year increments is something that hooks the viewer in. At each nine-year interval, we are provided further breadcrumbs as to what is actually happening. Encounters with the killer and the actual mental state of our main character fill in a lot of the blanks that the screenplay doesn’t provide in terms of clarity. It is actually a very effective way of building mystery and maintaining the viewer’s attention.

Boyd Holbrook has been something of a peripheral player for the last five years. Cutting an impressive figure like a ’70s matinee idol in Netflix’s Narcos, he then played a great bad guy in Logan (2017) and was later the lead in the ill-fated The Predator (2018). In this film, he actually gets to do the leading man thing but has an actual performance and a journey that backs it up. We see him start as an idealistic cop with ambition and love in his life, a character who has it all to play for. As time and tragedy begin to pile up through the years, Holbrook starts to physically change and carry himself differently. Come the finale and everything the character has been through, you feel the weight of the world and the release that this poor man comes to, and that is thanks to the strong performance of the leading man.

When the film is over, it becomes apparent what the problems were with the movie as a whole. It is eventually revealed that the killer was travelling backwards through time as we the viewer and the main character were moving forwards. So the final interval in 2015 is the first time she has travelled back, and the first encounter in 1988 is the last time. As is the norm for stories involving time travel, the killer has been travelling back to prevent a future disaster. In this case, it seems to be some kind of MAGA movement that has lead to thousands of terrorist-related deaths in the future. The killer also has a significant connection with our leading man, giving him a sense of redemption and purpose at the finale. 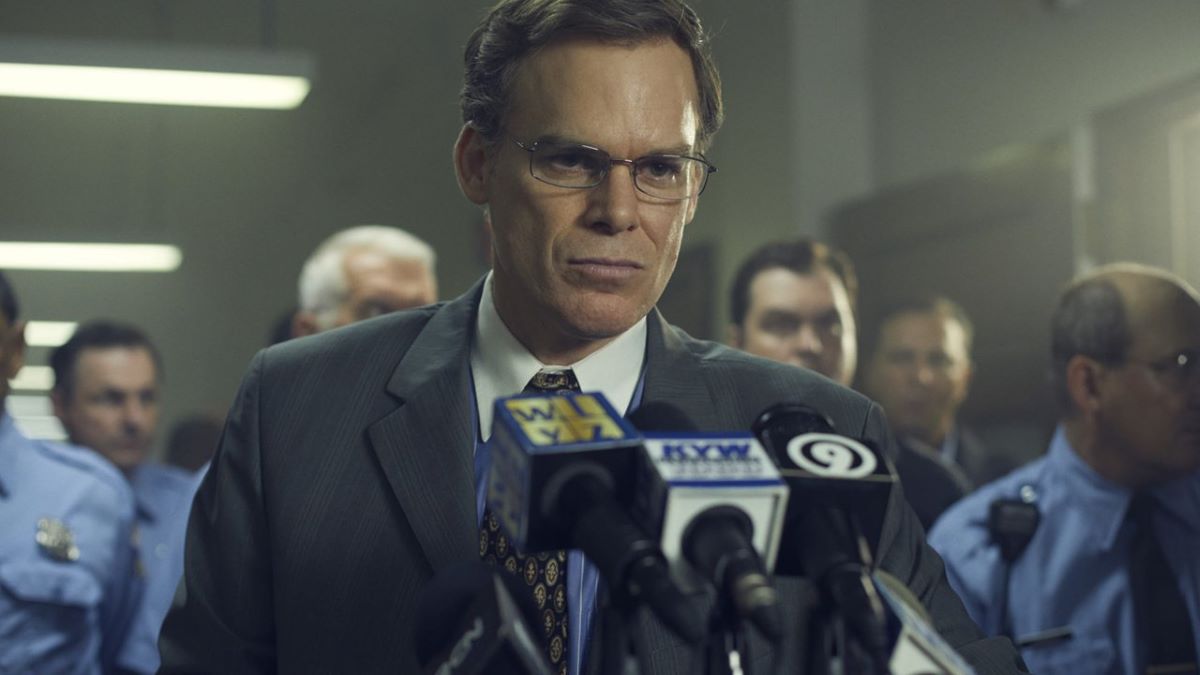 The problem is that all the good performances and structuring in the world can’t hide the fact that the actual reveals are not all that ground shaking. There is not enough time spent touching on what exactly happened in the future to cause all the mayhem, there are just glimpses of extremist like figures and then these victims in our stories present-day lying dead. We never really get to know any of the victims, and what could lead them to cause such future destruction, so a whole swathe of potential drama feels like it is missing there.

The film also has a chance to score further points in the political allegory stakes with a very quickly tossed aside ‘Black Lives Matter’ type of reaction due to the death of the killer in 1988. Aside from a few waved placards and angry TV screens, we do not get an idea of how this affected the life of our main character and his career. It feels like a further missed opportunity to tie this all into our current world and make it all feel more vital. It obviously has some effect on the world as they make a point of showing this in the background, what it was remains frustratingly vague.

The final problem is the actual mechanism of time travel and the title of the film itself. We get an idea that the killer’s movements through time are tied into lunar cycles. This isn’t really ever fully explained outside of appearances by an increasingly unhinged scientist and the obsessed Lockwood’s scrawled research notes. We eventually see some kind of water-based machine in a seaside cave used for this, and the operation of technology somewhere in the future, but how it all works is a mystery. Some further clarity here would have gone a long way because looking back it feels underwritten, hokey and shallow. Sometimes you can accept sci-fi logic with a few lines, but with time travel it becomes more difficult if an explanation isn’t clear.

Despite its rather glaring flaws, In the Shadow of the Moon is never less than entertaining for its entire running time. It is further proof that Jim Mickle is a talent to watch, and Netflix would do well to retain his services for future projects.