There’s something hilarious about movies about books. Not movies based on books, which dot the cinematic landscape like seashells on the shore, but movies about books. Particularly children’s movies about books that summon the full force of movie magic to help kids fall in love with reading. We see this sorcery in The Princess Bride, The Neverending Story, and, most importantly, the 1994 classic cartoon The Pagemaster. 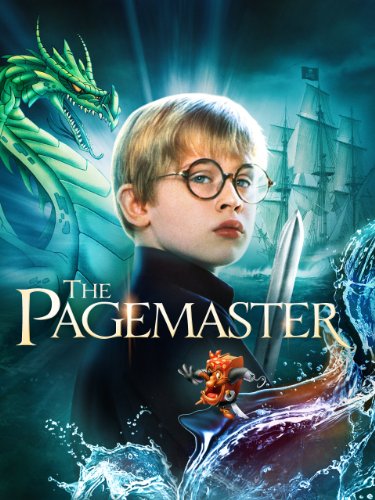 When I was little and VHS was the lingua franca of the realm, there was a lot of overlap between your favorite movies and the movies you just happened to have on VHS. Because my parents assumed one cartoon, one savage barrage of color and high-pitched voices, was as good as another, that meant I had some weird favorites. Directly because of this…

2. I’m one of the few cursed children who’s seen The Pebble and the Penguin.

3. I really, really love The Pagemaster.

Macaulay Culkin, at the height of his gee-whiz Home Alone powers, plays the most boringly named protagonist, Richard Tyler. Richard’s an agoraphobic boy obsessed with the various accidents and tragedies that can happen when you leave the house. Of course, this means that the frightened boy must venture out the door and get a bag of nails from the hardware store for his dad. The nails are for a treehouse that dad is building Richard—never mind the fact that Richard is, of course, afraid of heights, too.

Caught in a storm on the way back, Richard seeks shelter in a library, bumps his head, and is transported Wizard Of Oz style into a world of classical literature and hijinks. The transition from the live-action world of Macauley Culkin and his dad (the inimitable Ed Begley Jr.) to the world of animated fantasy comes in the form of a painted mural that first melts, then comes to early-3D-rendered life, finally morphing into a dragon that eats Richard.

As a lifelong word nerd, the idea of falling into a world full of my favorite books come to life was more than I could hope for. I wanted desperately to be Richard, talking to anthropomorphic books and wandering between classic stories like Moby Dick, Treasure Island, and The Curious Case of Dr. Jekyll and Mr. Hyde. Those books, Richard’s three Virgils through the Inferno of the Pagemaster, are impish representations of classic literary genres and voiced by Hollywood’s heaviest hitters. Whoopi Goldberg plays the winged firecracker of Fantasy, Patrick Stewart plays the swashbuckling tome of Adventure, and voiceover legend Frank Welker plays the lovably grotesque Horror.

Interestingly enough, not only does the film balance the aesthetics of these three genres when Richard encounters their classic stories, but the entire genre of the film itself seems to change to accommodate them. The horror segments are truly terrifying, the fantasy is breathtaking and coursing with wonder, and the adventure scenes are massive in scope and heroic in tone. In making a movie about stories, directors Pixote Hunt and Joe Johnston, and writers David Casci, David Kirschner, and Ernie Contreras, demonstrate a competent grasp of how best to tell a variety of stories. They understand not only how to make each different flavor look and feel and resonate with their characters, but also how to make them resonate with us, their audience.

It is through books that we learn things, not only the obvious recipe books and how-to manuals that teach us about coding and bike repair and the perfect pie crust, but also fiction; we learn how to feel for others, how to understand ourselves and our own feelings, and how to face our fears. Richard learns this lesson through the course of the film, just as we learn it every time we pull another book from the shelves. Rather than a cartoonish romp with literature as a framing device, The Pagemaster is a movie clearly in love with reading and a compelling, tonally thrilling way to share that love with us.

Throw on top of all that a brilliant, powerful turn from Christopher Lloyd as a dangerous and enchanting librarian (playfully named Mr. Dewey for all you library nerds out there) as well as the voice of the titular Pagemaster (a white-bearded Merlin figure), and you’ve got a film that’s less a third-rate ’90s animated feature and more like a home-video classic well worth cracking the spine on again.