Sometimes a film becomes more than just a film. As I walked into the press screening of Joker yesterday evening, I was already coming off a besiegement of hot takes and outrage over what the Joker could do; what it represents in this challenging social climate we find ourselves in in the United States. As I was wanded by security (for real, not a joke), all of that flow of information sped into my head and made me think: I am living a cultural moment, not simply seeing a movie.

But all the hub-bub and wide-ranging publicity is much ado about nothing. Joker will not make you root for a psychopath, nor will it make you take up arms against the elite. It won’t inspire you to commit murder and it will certainly not make you find sympathy for the devil, or, at least, his jester. No, it will probably entertain you. It may even shock you. But also, it could, surprisingly, bore you. It sure bored me.

For Joker, despite the whirlwind of news around it, is a fairly simple, mundane origin story like many comic book movies that came before it. And like many “edgier” comic book movies from yesteryear, Joker makes the same mistake those films did by assuming ramped up intensity equals compelling drama. Or that style overcomes a lack of substance. Yes, Joker is a beautifully crafted imitation of Scorsese’s New York circa the mid-’70s. But it is still just that: an imitation.

And of course, Joaquin Phoenix goes to Christian-Bale-like levels of horrifying body disfigurement and dedication turned up to 11 to make his performance realistic. But he does so to service an underwritten, predictable shell of a person. The most shocking revelation coming out of Joker was how incredibly one-note Phoenix’s performance was, despite the intense dedication.

But I believe a lot of audiences will trick themselves into thinking Phoenix’s devotion automatically means the film is good. But sadly, no one else involved, in front of or behind the camera, provides the film with the same dose of energy Phoenix gives his ironically boring anarchist. The screenplay, co-written by Joker’s director Todd Phillips (The Hangover, Old School) and Scott Silver (8 Mile, The Fighter), is very thin. Both men have separately been nominated for Academy Awards writing far savvier material, especially in the case of Phillips, whose Oscar-nominated screenplay for Borat was a thrilling satire of a Bush-America.

Phillips, both in script and direction, does not provide any reason for setting his film in ’70s Gotham (what is often considered the NYC of the DC universe). There are only superficial eyewinks and head nods to cultural artifacts of that time and any attempt to mimic the malaise of the Carter years, with mentions of funding cuts across the board and an impending recession, are taken at their word and barely shown. The decay and scum of Gotham is simply window-dressing for a stage-play. You never at any point feel the intensity of that environment. 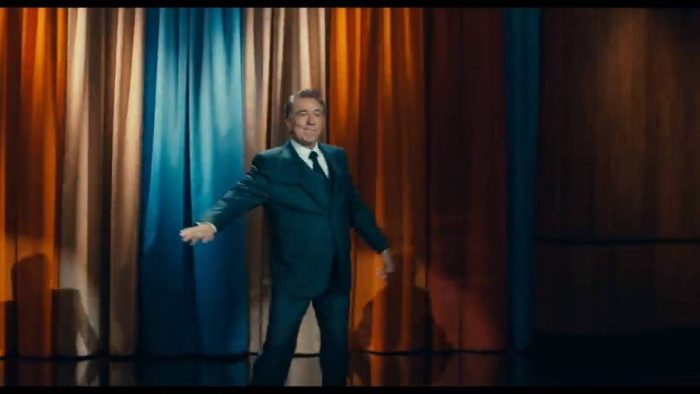 In Taxi Driver and The King of Comedy, the two films Joker most wants to emulate, you could smell the foul corners of the city; you could taste it on the tip of your tongue, for better or worse. Joker simply tells you a certain place is bad as opposed to making you actually feel it. When adding this superficial setting to an already thin screenplay, you get Phoenix doing a lot of prancing around in service of mostly nothing.

Phoenix is asked to carry a lot of this film himself, which is fine. The story is about him after all. But other iterations of the Joker character have worked for various different reasons that Phillips chooses to ignore. Though I tried very hard to view Joker in a vacuum, the character is so legendary and has been interpreted so many different ways, that it is nearly impossible not to place Phoenix amongst the other candidates and compare.

Many will die on the hill of Jack Nicholson vs Heath Ledger as the perfect Joker. I like to throw Caesar Romero in myself because I’m kind of crazy. But in all three of those iterations, the filmmakers never chose to define the Joker in very specific terms. Caesar’s was pure ham and had no motivation other than to be (deliciously) evil. Nicholson’s Jack Napier was pretty cut and dry: he was a calculating, mob captain looking to move up in his organization. Becoming the Joker just made him more creative and bonkers. His unpredictability made him unforgettable. And of course, Ledger’s take was defined largely on how much we didn’t know about him: his countless origin stories he tells are obvious lies. His purpose was simply to be an agent of chaos.

In all three of the cases above, the Joker had a foil to work off of, primarily Batman/Bruce Wayne. By having the two character’s differences (and sometimes their similarities) crash together, the Joker became a much more intriguing person to follow. He was not only unpredictable but also an actual threat to the hero. He served a purpose.

Phoenix has virtually no one to play off of. Other than Phoenix himself (playing Arthur Fleck, who becomes the Joker), the biggest characters to get screentime are Fleck’s mother, Penny Fleck (Frances Conroy) and late-night TV host Murray Franklin (Robert DeNiro). Penny has maybe ten minutes of screentime and exists purely as fodder for plot motivations and shocking twists. And poor Bobby DeNiro, taking on the Jerry Lewis role from The King of Comedy, is given such little time to do anything that he serves no other purpose than to be background noise.

Though a potential love interest pops up (Zazie Beetz) and a few detectives appear looking into Fleck’s potential involvement in the recent “clown-inspired” murders on the Gotham subway (played thanklessly by Shea Whigham and Bill Camp), Phoenix is virtually alone. Which, if he was not so clearly defined, would be acceptable. But Phillips and Silver go out of their way to explain that Fleck is a victim of multiple mental illnesses and even has a condition called Pseudobulbar, which makes those that have it laugh at random times despite a differing emotional mood.

There are other revelations and traumas uncovered about Fleck’s past but I won’t go into them due to spoilers. But needless to say, you know too much about why Fleck becomes the Joker that you can’t garner sympathy or hate for him: he’s just there. And, frankly, simply being crazy is not a strong enough motivation to carry over two hours of screentime. Though I did not want to see Batman necessarily, given Fleck/Joker someone to play with, would have helped define him.

Marketing certainly didn’t help this movie either. What you see in the trailers is pretty much what you get. If that is a spoiler, sorry, but besides being somewhat predictable and boring, Joker has pretty much been overadvertised to death and there are minimal surprises in store for the viewer. The movie will still make a bazillion dollars and people will love it and defend it. And for those who know me, no, Marvel hasn’t paid me to write this review! I just felt underwhelmed and unmoved, which is the cruelest joke of all.