Okay, stop reading. Stop reading right now and go watch Kings, a series that probably slipped right by you when it was on just like it slipped by me. It’s only one season, and it’s on Amazon Prime and iTunes. It’s not a big time commitment. Go. I’ll wait. 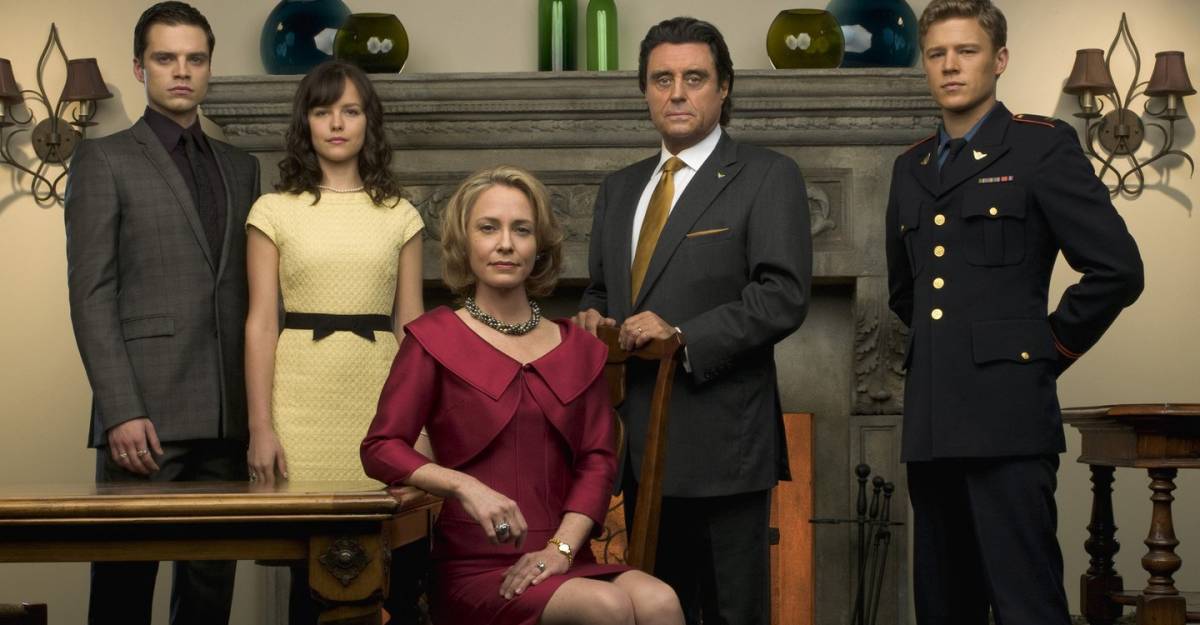 Back now? Okay. I still maintain that if Kings had aired on cable instead of network television, it would have been a huge hit. All the factors for a great prestige show were there: epic story, stunning writing, amazing cast, gorgeous production value. HBO could have promoted the hell out of it. You know the expression “that’s too much car for you”? Maybe this series was a little too much car for NBC. Seriously, it’s a freaking Ferrari.

Kings is a modern retelling of the Biblical story of King David. Is that epic enough for you? Ian McShane (Deadwood) plays King Silas Benjamin, the beloved ruler of the kingdom of Gilboa. He has created a kingdom of prosperity through war and divine favour. Enemies from the neighbouring kingdom of Gath still threaten their borders with tanks known as Goliaths (get it?), but the Gilboan military is strong. Among those Gilboan soldiers is David Shepherd (Chris Egan). David saves the life of the king’s son Jack (Sebastian Stan of Avengers: Endgame) and becomes the new hero of the people. This show managed to squeeze as much glorious intrigue into one season as many others take three or four to do.

Although I found out about the series in the first place from creator Michael Green’s (American Gods) Twitter feed, I confess it was Ian McShane who sparked my interest. That’s not surprising. He’s Ian McShane. I’ll follow him anywhere. And to see him as an actual king? Please. If this man put out his own cologne, it would be called “Gravitas.” He dominates the screen in every scene, looks terrific in a suit, and talks to God a lot. And when you’re Ian McShane, God apparently listens to you. Silas Benjamin knew he was destined to be king the day a roost of monarch butterflies fluttered down and formed a crown atop his head. He never passes up an opportunity to share this story with his people and they love him for it. When Silas happens to see young David with his own crown of presumably prophetic butterflies, he is understandably a little bit shook. 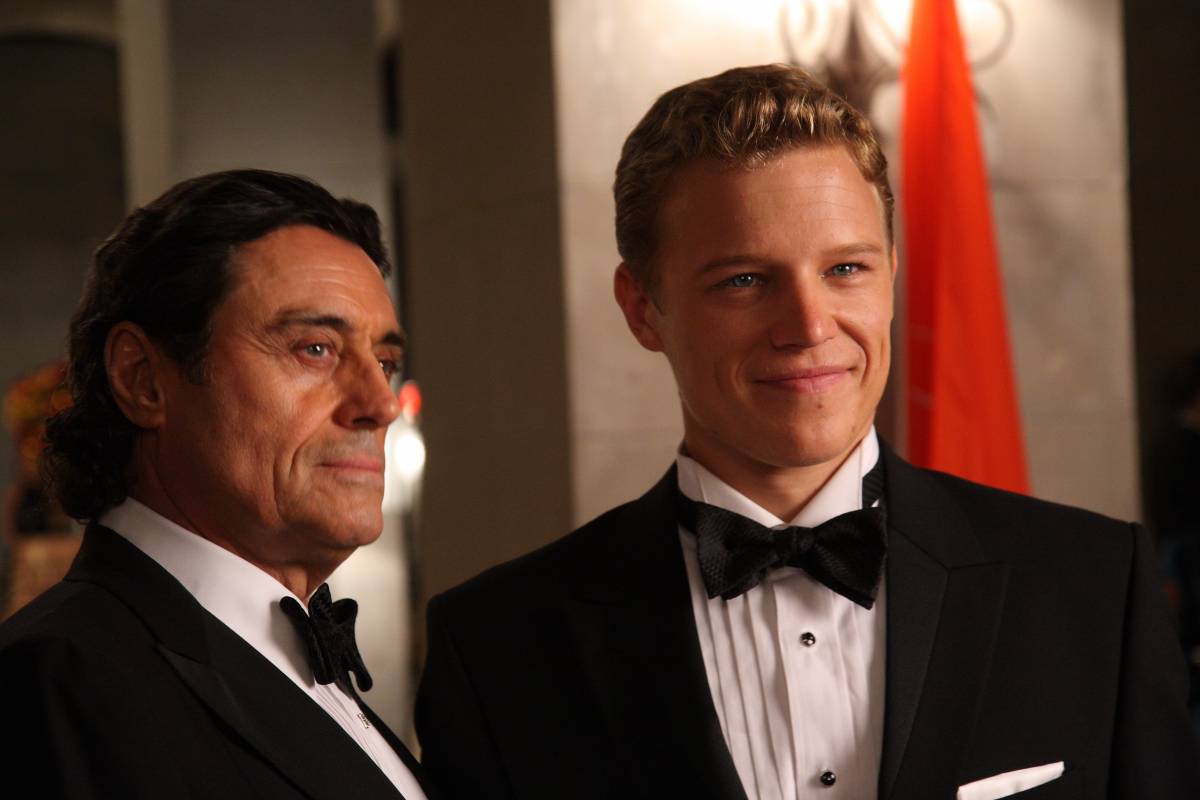 People who want a love story to go with their Biblical epic can have that, too. Early on, David meets and falls for King Silas’s daughter Michelle (Allison Miller). She’s promised herself to God and a life of service in return for her miraculous deliverance from a childhood illness, but that goes out the window when she meets David. Don’t think she’s just a wishy-washy love interest for our hero, though. The characters in Kings are better and more interesting than that. Michelle Benjamin is not just kind and brave; she uses her position of privilege to try and help the common good. We first meet her in her father’s audience hall, making a plea for better healthcare for the populace. When plague strikes the city, she risks her own life to ease the passing of a young boy whose mother has already died of the illness.

When Michelle falls in love with David, not only is she torn between her earthly desires and her divine obligation, she is torn between two kings. When David rescues the prince, King Silas takes David under his wing. He gives him a promotion and gives his blessing for David to court his daughter (though Silas knows about his daughter’s vow to give her life to God), and he even makes him breakfast. One of my favourite character details, by the way, is that Silas insists on making breakfast for his family every morning. Because Ian McShane needed another thing to make him sexy. But I digress.

King Silas’s brother-in-law William Cross (Dylan Baker) is pleased to have his sister as queen, but he’s bummed that the war with Gath is going to end. He’s a rich man and the war is making him richer. He blackmails Silas into reneging on the peace treaty, and when that doesn’t work, he freezes the royal treasury’s bank account. David, who doesn’t know about this, rushes into the political fray to chase down the Gath Premier (Mark Margolis of Breaking Bad) and plead in support of the treaty. Foiled, Cross has to make a new plan to take down Silas. The new plan involves Prince Jack and the notion that he would depose his father with his uncle’s help. Of course, Prince Jack doesn’t know that his uncle plans to rule through him and that he would be merely a puppet king.

Prince Jack is probably my favourite character in the show (who isn’t Ian). My only experience with Sebastian Stan involved his role as Bucky Barnes in the MCU. Since I’m not large with superheroes to begin with, what I remember most about Bucky is him doing a lot of brooding—which is not a bad thing, I’m a fan of Angel, after all, and he is Captain Broodypants—but it was Kings that proved him to be more than just another pretty face. Jack Benjamin is a typical privileged rich playboy—except he’s quietly gay, underneath it all.

This wasn’t fabricated for the series. Many Biblical scholars have theorized that King David and his friend Jonathan had more than a close, platonic relationship. Read the Book of Samuel sometime. You can find arguments for both sides. In any case, it makes for a fascinating character in Jack Benjamin. Jack wants to be king someday and wants to impress his father, but he also wants to be with the young man he loves. Stan does a beautiful job with this. His performance is subtle, graceful, and glorious. We stan you, Mister Stan.

We’ve also got Eamonn Walker as the Reverend Samuels. He’s the voice of King Silas’s conscience, often interpreting the will of God in ways the king doesn’t like. Walker doing a great job at being intense and religious comes as no surprise to anyone who’s seen him in the HBO prison drama Oz. He’s doing the same thing there, only as a Muslim. He’s terrific, in either context or faith.

I tell myself (and Twitter, every time I rewatch) that Kings was simply too beautiful for this mean old world of network television. I don’t know if that’s true. Some shows, you watch them and it’s clear why they didn’t work. This one? Honestly, the only thing I can come up with is the “it would have worked on cable” theory. Can you come up with a better reason? Watch it and let me know. Go ahead. I’ll wait.