Every week I make notes as I watch Power, and every week I end up with an entire book full of small incredible details that keep Power surprising us week after week. This definitely isn’t a quiet show; it wants to surprise us and it knows just how damn good it is. I am completely in love with this series and I applaud Courtney A. Kemp for keeping it real and never taking Power away from its roots.

Last week, Ghost discovered that his son helped Tommy kill Proctor by letting him into their apartment. This week, we join Ghost waking Tariq up with a gun pressed up against the side of his face. Apparently he thinks Tariq let Tommy into the building so he could make a move against him, and he takes Tariq to the apartment to see the aftermath of what Tommy did “with his help.”

Ghost takes the money Tariq made and finally tells him to never call him Ghost again—he owes him that much. It didn’t work, but I’m glad he said it. I have always hated hearing Tariq call his father Ghost; the guy deserves a little bit of respect. Hearing James say this made me feel quite guilty, and somewhat sorry for him and his efforts as a father. He did look after his kids despite how it might seem. He put time into those relationships, and literally everything is crumbling down around him. He’s losing his son just like he lost his daughter.

After instructing Tariq to never talk to Tommy again, James seems to believe that he will head back down the correct path, but we know better and aren’t surprised to see him head straight to Tommy’s apartment to look for his uncle. 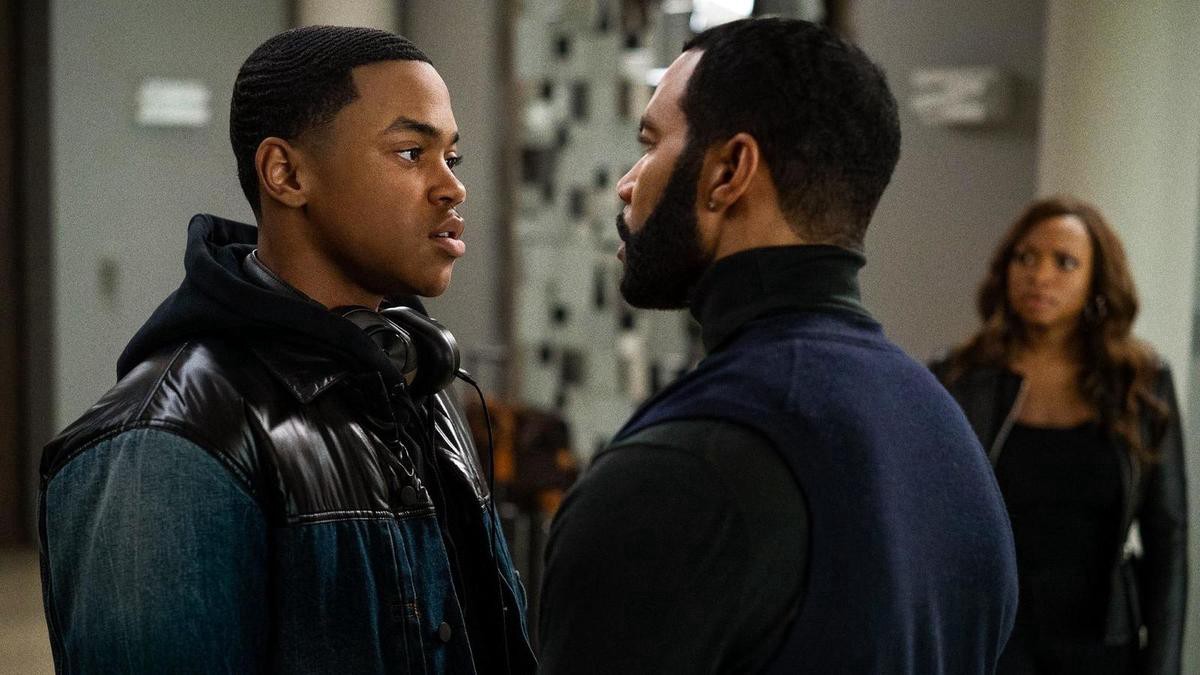 Earlier that day, Tommy gave Keisha a gun for protection and the first thing that came to my mind is that she can’t handle that responsibility—she is too scared to be packing. I was proved right, too. As soon as Tariq knocked on the door, she pulled out that handgun thinking immediately someone was there to kill her.

Keisha suspects 2-Bit when she discovers some of Tommy’s supply is missing, and in the heat of the argument he grabs her and pulls her back. Tommy isn’t going to be happy about this, but Keisha realises that it’s likely Tariq who stole the drugs. As a result of this, both 2-Bit and Spanky get fired but they’re allowed to walk free.

Tommy questions Tariq and, of course, he tries to lie his way out of it before feeling guilty and confessing. Tommy tells Tariq they aren’t family anymore after hanging him over the edge of the rooftop. It’s hard to hear and hard to see but the family bond behind Power‘s main characters has always kept the show feeling comfortable and I think right now we are losing that. The show is losing more beloved characters each episode, and while it’s real, it’s hard to come to terms with when you love the relationships between characters in your television.

Dre is reunited with his daughter at a Councilman Tate rally, but is ensured the pictures won’t be released until after Tate becomes governor. He is still in hiding from Tommy and can’t be seen, because James is bringing him in as Jason’s new district, leaving him free to kill Tommy when he pleases.

However, when the press release is made and the pictures are out there, 2-Bit and Spanky decide to kidnap him and bring him to Tommy to get back in the business. What they don’t know is that earlier on Saxe blackmailed Dre yet again into wearing an ankle bracelet to track his location. They tie him up and leave him with BG, unaware that Dre had worked his hands out of the wire. Dre guilts Grimace into letting him phone his daughter but as soon as he looks down Dre grabs his gun and shoots him in an instant. I was in total surprise at this point. I was not ready for the sudden death of BG at all. That man has always been loyal to Tommy, and he left within seconds. RIP Black Grimace.

2-Bit and Spanky and Ghost make attempts to get Keisha out of town this week, Ghost offers her money to start a new life, and the guys decide to scare her out of the game. They send in a man to threaten her and he cuts her with a knife. She grabs the gun and kills the guy pretty fast, but because of Ghost offering her money she thinks he sent someone to kill her. Of course, this isn’t true, but Tommy can’t think logically through rage. He assures Keisha they can have a normal life with an unsettling “I got you … Now grab his legs.”

Cooper Saxe gets himself into the deep trouble that he deserves in this episode of Power. When Blanca brings in Proctor’s daughter and returns her backpack, she learns of the missing unicorn from her mother and discovers the bug planted in it after retrieving the unicorn from Saxe’s office. When Warren learns of this, he puts Saxe on administrative leave and is determined that he will get Saxe arrested and sent to jail. I sure hope he does. He has been a major problem since day one. 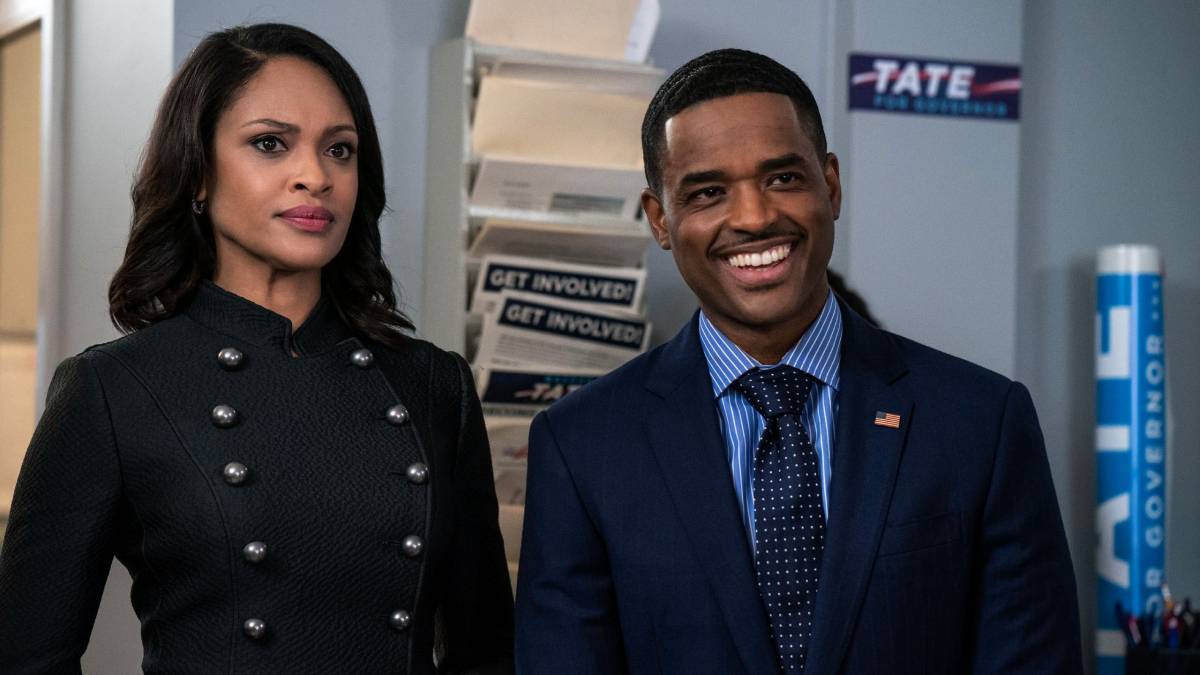 Councilman Tate is exposed by Derek for having an affair with his wife. He worries that word will spread and attempts to come up with cover-up stories such as dating Ramona Garrity to improve both of their reputations. It is revealed at this point that Ramona has feelings for somebody else. We don’t know who, but I’ve always said she has eyes for James.

James takes the opportunity to once again make Tate’s life harder and offers Derek the role of Project Manager for the QCP. In exchange, he will keep any information about Tate and his wife to himself. Ramona meets with his wife, and she reveals that she has no interest in a future with Tate. But she actually wants to run herself next year, and Ramona could potentially end up helping her.

Tommy drives Keisha out into the suburbs and shows her a house he bought for them. I have no idea how he could afford this since earlier on in the episode he was very nearly out of money. If Keisha hadn’t been blinded by the gifts, she might of questioned this too.

This week’s episode ends on quite a shock. Tariq had been trying all episode to get drugs to move and finally acquired a supply from Dre, and in this last scene Tasha announces that she is going to help him move it. She is going to teach him the way to be a distributor correctly so that she doesn’t need to lose another child. I have no idea where this particular story is headed, because in reality a parent should never accept this from their child. Nevertheless, Tasha is about to teach Tariq the game.