Light gun games were an absolute staple of any true arcade. They were attractions, providing an experience that simply couldn’t be replicated at home, and were relatively easy to play. Drop in a few quarters, pick up a tethered plastic firearm, and blast away at anything crawling across the screen. These games were fun, even more so when playing co-op with a friend or stranger, and their prevalence was most certainly related to their coin-gobbling architecture. Bunch of enemies flood the screen and drain your health meter? Better stuff in a few more quarters to keep playing. Make no mistake; light gun games were there to take your money.

While many of these games followed a paint-by-numbers formula and could easily be forgotten once you racked your plastic gun, there were a few notable standouts that gamers still remember fondly. Taito’s Operation Wolf and Namco’s Time Crisis series were but a few standouts, and of course, Sega’s House of the Dead has long been considered the quintessential horror shooter.

However, there were other games that still catered to the need to strip flesh from bone with faux shotguns and semi-automatics. Despite shopping mall arcades going the way of the dodo, retro game rooms and gaming bars are popping up around the country, and may give players a chance to go into the following titles with smokin’ barrels once again. 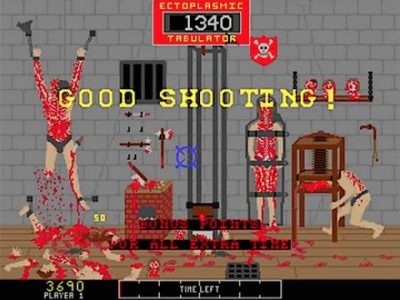 Some type of story drives most video games, an end-goal implemented to hook passersby into plunking quarter after quarter into their slot. During the arcade boom of the 80’s that goal was usually to rack up as many points as possible by chomping pellets and destroying spaceships. Or, as is the case in 1986’s Chiller from Exidy, spraying copious amounts of gore across walls and graveyards.

Chiller was one of the earliest attempts at a light gun based arcade cabinet. The objective was simple; shoot everything. Those who did were rewarded with bloody and blocky bits of dismemberment and destruction far outside of anything you’d ever experience in Paperboy or Frogger.

The game played out over four screens (with a bonus fifth for those adept enough to find it). A medieval torture room and graveyard are part of the rotation, filled with bodies, ghosts, and zombies. Shots rip their bodies apart, revealing bones and other viscera. Extra points were also awarded for incorporating set props like a guillotine or cider press into your mayhem.

Chiller wasn’t easily found in strip-mall arcades of the day. Many arcade owners refused to buy it, not surprising considering the content on display. A home version, albeit unauthorized, was released for NES back in 1990. While it retained the core gameplay elements (i.e., shoot stuff), some of the gore and other effects were omitted, potentially more as a result of the console limitations then by designer choice. 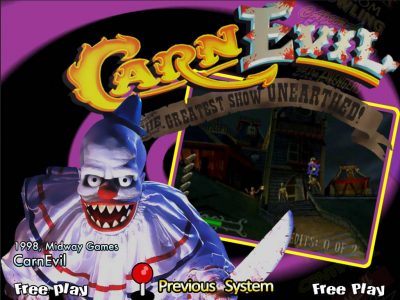 In 1998, Midway, the studio behind the ultra-violent Mortal Kombat, released CarnEvil. Landing in arcades two years after Sega’s inaugural House of the Dead, the game employs the familiar on-rails formula with a dark carnival horror twist. The story is inane; a couple of kids out on Spooky Sam’s Ghost Tour seek out the tomb of Ludwig von TokkenTakker. Discovering his grave site, the protagonist (who we never meet) finds a golden coin and inserts in into the tombstone. On cue, a long-forgotten circus springs forth from the ground and brings with it all manner of maniacs and monsters including giant spiders, zombie babies, maggots, and even a sadistic Santa Claus.

CarnEvil embraced its comically over-the-top stylings. Players would travel across a limited assortment of locations with a carnival theme, providing an hour or so worth of enjoyment from start to finish. There were health and weapon pickups along the way, as well as the requisite civilian ready to dock your health bar should you accidentally shoot her. The stages were fun to play, the gunplay was fast and frantic, and the game was gory beyond belief. And while CarnEvil was famous for its time, it never did receive a home console release.

Horror lends itself very well to on-rails, light gun games, but in 2012, Bandai Namco decided to take a different approach with their Dark Escape 4D cabinet. Dubbed so because it assaults as many of the senses as possible, the machine provided players with 3D helmets (modifiable to a 2D display sans helmet should arcade operators prefer), front and rear fans designed to simulate air and breath effects, a rumble seat, and even heart rate monitors built in to the gun to measure any panic attacks, the game created a sense of immersion never before attempted.

Primarily found within Dave and Buster’s locations around the U.S., Dark Escape 4D used a sit-down cabinet design with curtains that could be drawn to filter out light and noise. In keeping with light-gun traditions, it’s not a very long experience – a playthrough can last about the same time it takes to enjoy your appetizer and entrée. And while the story is relatively generic, full of horror tropes like mad scientists and human experiments, the mechanism of engaging players with real-world gimmicks is something that is not to be passed up.