The Mission Impossible franchise is still going strong and has been for nearly twenty years. It’s overtaken the Bourne franchise in quantity and shows no signs of stopping, it’s full steam ahead to secure the second spot in high-octane spy movies, right after the untoppable Bond dynasty. Last year’s Fallout was arguably the best yet in a lot of ways but it’s very easy to forget the roots of the franchise is a ‘90s spy thriller from Brian De Palma. Even though every film that followed it was more action-oriented, with main man Tom Cruise constantly outdoing himself with more ludicrous stunts with each movie, De Palma’s film set the tone and laid the foundations for the franchise.

His first entry is a darker creature than those that followed and had more of an espionage tone to it that was more true to the original TV show on which the movies are based. This isn’t surprising as it’s from the same Director that gave us Scarface and it’s this tone that’s sadly lacking in later instalments. John Woo took on directing duties for the disappointing sequel, which is by far the worst in the franchise. Woo went in all guns blazing (pun intended) with every cliched ‘90s action trope that you can think of and instantly left all of the dark intrigue behind to the detriment of his film. It was down to the master of pastiche JJ Abrams to get things back on track for the third movie and does a great job of modernising the themes.

The narrative of De Palma’s film was more visceral and macabre. Perhaps due to the plot of betrayal by a mentor and love interest but it could be argued that it’s just down to his directing style. De Palma states that the goal of the script was to “constantly surprise the audience” and I believe this was achieved to great effect as well. The Director also pushed to have the opening sequence set in Prague, a location that was untouched by Hollywood at the time which added a tasteful element to story. A love triangle subplot was cut after test screenings as it was thought that it took viewers out of the genre, this was a wise move and in retrospect, it was very progressive to have such an understated relationship between the two leads, especially at that time in the ‘90s.

Cruise deserves praise as well for his performance and producing duties. He was mainly responsible for orchestrating the logistics of the final action sequence on top a train and did most of his own stunts. The score was composed by Danny Elfman, who was brought on last minute in post-production to replace Alan Silvestri. He only had a matter of weeks to produce it and it added perfectly to the dark, suspenseful atmosphere. It’s common knowledge that Cruise is always a Producer on the more recent instalments but many may not be aware that he’s had this role since day one. The series seems to be very much his baby nowadays and he’s built a franchise around him that perfectly fits his sensibilities. In De Palma’s first film, however, neither Cruise or his character, Ethan Hunt, is in control and I believe this is what makes it more appealing. 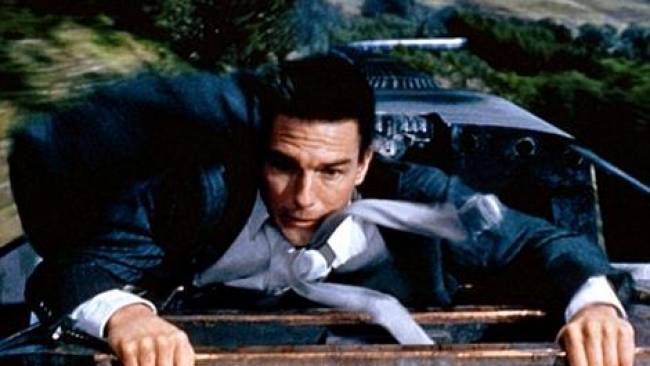 The opening of the film sees Hunt thrown to the wolves, a mission goes horribly wrong and the majority of his team are killed, leaving him set up to take the blame as a traitor. The rest of the narrative sees him having to pull himself back up out of the quicksand, despite several people around him with hidden agendas. It’s quite a bleak start and it’s interesting to see our protagonist on the back foot from the outset. Hunt seems to go rogue to some degree in most of the movies but the first time felt fresh and a departure from your Bond type of spy who usually has the full support of his government behind him.

It could be because we join Hunt early on in his career but from the very next movie, he’s imbued with an unwavering confidence in his own strategies and abilities. This may make for grander action and set pieces but I also can’t help but feel that the level of danger is significantly reduced because it never feels like he could actually be killed after this first film. With each new film and more outrageous missions, it continuously loses more realism. They have even hung a lantern on this in one or two of the more recent movies. In the fourth instalment, the Secretary of State shuts down the IMF by declaring that most of the success of the division is just down to pure luck.

Another major element that lets the sequels down is their casting choices. With the increase in budget comes less diversity and cookie-cutter actors that fit the Hollywood mould. De Palma’s film had not only cool, European actors like Jean Reno and Emmanuelle Béart but also classy Brits Vanessa Redgrave and Kristin Scott Thomas. The collective cast for this film is better than the rest of the series combined and gave the first outing some real substance. Redgrave, in particular, adds a touch of class to the story, I could watch her as the card-carrying, flirtatious Max all day long. 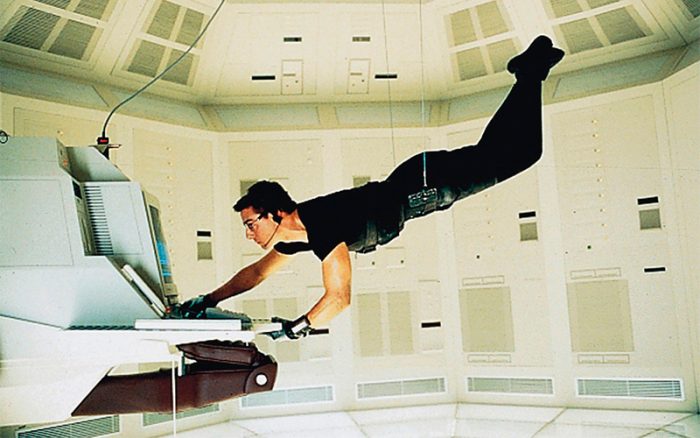 The iconic heist at the heart of the narrative is what makes the film so memorable. Hunt suspended by wires from the ceiling has been copied and parodied quite possibly more than anything else in the entire history of cinema. The difference being that it’s the main set piece of this film, whereas the stealth mission is just the entrée in the later movies. There is an action climax of sorts but it’s fairly minimal and just skirts the edge of what’s considered plausible. Also, Hunt is really put through the wringer and you feel every blow he receives whilst desperately preventing the villains escape. These days, Action movies are ten-a-penny but it’s stealth that the IMF own the racket on and they still do.

Bourne is more proficient at it but he’s constantly on the run and his skills have to be more improvisational. Whereas Bond often starts out stealthy but things very quickly escalate and chaos ensues. Mission Impossible isn’t a masterpiece and it certainly ranks lower in De Palma’s filmography but for a blockbuster movie, it has depth and charisma. It receives criticism for a supposed convoluted plot but personally, I just think that makes the mind games more effective. I remember when I first saw it as a child vividly even though I would only have been about nine years old at the time. Even though I may have been more easily impressed back then, it still had a big impact.