Welcome to What’s the Buzz, 25YL’s feature where members of our staff provide you with recommendations on a weekly basis. In our internet age, there is so much out there to think about watching, reading, listening to, etc., that it can be hard to separate the wheat from the chaff, filter out the noise, or find those diamonds in the rough. But have no fear! We’re here to help you do that thing I just described with three different metaphors. Each week a rotating cast of writers will offer their recommendations based on things they have discovered. They won’t always be new to the world, but they’ll be new to us, or we hope new to you. This week’s entries come from: Hawk Ripjaw, John Bernardy, and E.T. Otero.

Hawk: It took me until this year to finally watch Rob Zombie’s House of 1,000 Corpses and The Devil’s Rejects, and while I didn’t love them, I was strangely invested in the vibe they give off. So as soon as the latest movie in the trilogy, 3 From Hell, was available for rental, I jumped on it. At the end of The Devil’s Rejects, Captain Spaulding (Sid Haig), Otis (Bill Moseley) and Baby (Sheri Moon Zombie) seemingly perished after racing their car towards a police barricade and getting obliterated by bullets. 3 From Hell picks up right where that left off, revealing that the trio survived the encounter and have been incarcerated.

Due to Sig Haig’s failing health at the time, Captain Spaulding only enjoys a few minutes of screentime (and a banger of a monologue) before he’s written out of the story. Instead, the third from Hell is introduced as Otis’ younger brother Foxy (Richard Brake). The movie follows a similar formula to The Devil’s Rejects as a sort of road movie with extended rest stops. Also like its two prequels, this is not a pleasant watch and is filled with graphic violence, menace and sadism that refuses to look away from the glee the trio derives from hurting others. Yet it’s oddly compelling to follow these characters.

What these movies do that is interesting is takes these monsters and give them a degree of humanity. Their camaraderie is emphasized, and they’re often forced against other people who are evil in their own ways. It’s an odd psychological trick that Zombie plays; he shows our main characters do horrible and sadistic things to other human beings, then turns around and has them suffer at the hands of someone else, and suddenly we’re almost rooting for the three.

Rob Zombie is one of the most distinctive directors working today, as his films are stylistically unlike anything else. 3 From Hell both benefits and suffers from this. It has the flat and stilted dialogue with the occasional gem (namely Spaulding’s speech). It has strange montages and stranger bit characters, and Zombie anarchically lets his imagination run wild, particularly when he allows his music video directing sensibilities sneak into his work here.

3 From Hell is probably the least of the trilogy involving these characters, but as a continuation of his story and for general fans of Zombie’s movies, this is worth a rental.

John: Brad Dukes was a guest on this week’s Red Room Podcast, and the topic at large was his critical response to the modern additions to Twin Peaks.

Before the 2014 announcement of more Twin Peaks, Dukes wrote Reflections: An Oral History of Twin Peaks. So suffice to say, Twin Peaks is important to him. But these days, Dukes is more famous in the fandom for how the new Peaks rubbed him the wrong way.

Most of the podcast focuses on the big issue at hand, but over the course of the hour, he and host Scott Ryan discuss a number of topics, including how special Dukes’ recent book on China Beach is, the death of Robert Forster, Dukes’ wife’s cookbook, and other features within Blue Rose Magazine #12 along with Dukes’ essay—the Duwayne Dunham interview teasing an explanation of the Part 7 diner scene?? Sold!

As for Twin Peaks Season 3, Dukes found his critical essay therapeutic to write. He thinks Twin Peaks fans who kept the show alive all these years needed to be given something by Lynch, as the show is half art and half commerce. If you have other stories to tell, that’s fine, but connect them to Twin Peaks or call it something else.

Ryan did a good job approaching the question of expectations by seeing how Dukes thinks of Fire Walk With Me now. They also talk about Laura’s body disappearing and what that retroactively does to the experience, Michael Ontkean’s absence, Part 8, and what Dukes knew before the show aired.

Considering the topic, this could’ve gone south in a hurry, but Ryan and Dukes stayed respectful and mostly positive throughout. It’s worth a listen from a storytelling point of view as well as being an explanation of the rift in the fandom. Give this podcast a go, and then order Blue Rose Magazine #12.

Brad Dukes returns to the Red Room to talk about his article in Issue #12 of The Blue Rose Magazine. Brad writes a critical essay about David Lynch & Mark Frost’s Season 3 of Twin Peaks. Brad, who wrote Reflections: An Oral History of Twin Peaks, was a huge fan for 25 years …

E.T.: Imagine for a second if in Rogue One: A Star Wars Story—from conception, to planning, to execution—the entire heist had to be pulled off without the rebels being able to exchange so much as a single word. How’s that for a 97.6 percent chance of failure, K-2SO? This concept is what I think about when it comes to the premise of M.L.S. Weech’s story, Stealing Freedom (not to be confused with Elisa Carbone’s novel of the same title).

On a planet where speech, self expression, and even displays of emotion have been outlawed to the point of everyone having to wear a deadly shock collar—and pay (with actual money) for every word they might ever want to say—a group of so-called traitors will try to pull a heist to free the planet from its oppressive silence. Surviving their mission, however, is not guaranteed.

This story deals most notably with the idea of free speech—a concept that, if the socio-political climate of this day and age is anything to go by, might be something we take for granted when maybe we shouldn’t. Are the potential dangers of hateful or otherwise harmful speech enough for society to relinquish their freedom of expression altogether? Should government have the (literal) last say in it, or should the people be able to decide for themselves? And what are we willing to sacrifice in choosing what side of the argument to stand on?

The points for and against it may not be necessarily new, but M.L.S. Weech has been able to craft a gripping tale that kept me on the edge of my seat the entire time—and by “my seat” I mean the chair in my office where I read the 70-something-page story while pretending to work as masterfully as the characters do while planning their potential suicide mission against the system.

The individually unique cast in this story all have distinct personal motivations and reasoning that organically inform their decisions and reactions throughout—even the main antagonist can be relatable—which gives the whole thing an emotionally compelling backdrop. This, driven by a solid pace, skillfully built, raises the tension and stakes from the very beginning and never lets go until all is not said (get it?) and done.

I’m of the idea that some stories are born for the medium in which they’re told. This is, in my opinion, one of those. The way Stealing Freedom is written, and the techniques used to tell the story, illustrate this point beautifully. The would-be group of freedom fighters trying to pull off the heist in the story are prohibited from speaking entirely. Even sign language, for example, or anything else the planet’s “Big Brother” can identify as a means of communication, is essentially punishable by imprisonment or even death. This forces the characters to use an insanely discreet code while we as the readers are only privy to what they secretly attempt to communicate to one another through internal monologue, third person omniscient narration, and the author’s creative use of storytelling techniques. For those of you who may be at all interested in creative and effective storytelling tools for prose narrative, this is a solid example.

If you’re into shows like Leverage, or movies like Catch Me If You Can (both to which the author himself compares his story), enjoy futuristic “what ifs” like V for Vendetta or Equilibrium, or just want a short read to take a break from the daily grind exploring interesting themes and ideas, I definitely recommend M.L.S. Weech’s Stealing Freedom.

From my part, I’m just glad I can still read something like it today and freely write this recommendation without taking a couple hundred milliamps to the neck. And after checking this story out, you’ll probably be glad you can too. 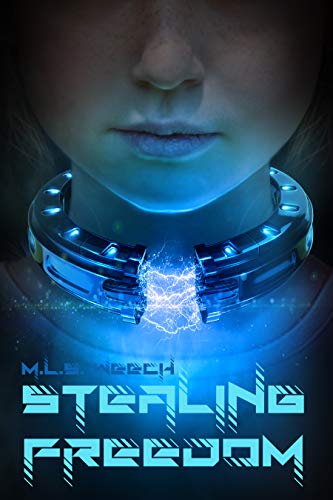 Those are our recommendations this week. What are yours? Let us know in the comments!