Freaky Friday is a familiar story, especially to any dedicated Disney fans. Mother and daughter magically switch places to see how the other really lives, and their relationship becomes better because of it. It may be a difficult plot to swallow considering its somewhat outrageous supernatural effect, but most audiences find the storyline heartwarming in true Disney fashion.

In the 2003 version, what gets mother and daughter to trade places is the fortune inside a cookie. Tess Coleman (Jamie Lee Curtis) and her daughter, Anna (Lindsay Lohan) are never the same from then on. The two live completely different lives and have equally diverse personalities which just may be the undoing in both of their lives. From Tess’s job as a therapist and her impending marriage to Anna’s teachers and her bandmates, it’s a struggle to get through the day in one piece and without destroying how the other half lives, so to speak. Still, the two come to appreciate the hardships that the other faces and gain a greater understanding as they get to know one another again.

It’s nice to think that our issues with our parents could all be solved with one fortune cookie and a magical swap. That’s what we have this movie for. Yet, this movie tends to gloss over serious issues that many families face each day. Dysfunction to some degree exists in every family; no individual is perfect, which is where the dysfunctional effect stems from.

While it’s obvious Tess and Anna clash because of their abundantly diverse personalities, underneath lie deeper and darker issues as to why their family is experiencing such chaos. Dysfunction runs deep, but this movie merely hints at what that is and solves it within just a day when really it could take years.

For one thing, Tess and Anna lack an understanding of one another. Their polar opposite personalities guarantee that they won’t be able to find common ground. Although both make efforts to some degree to understand the other, they have different motives for doing so. Anna usually tries to get into her mother’s head to manipulate Tess into giving her what she wants, and Tess frequently relays that she “really wants to understand”, yet constant distractions keep her from following through.

Cue Ratt’s “Lack of Communication” and we have their relationship in a nutshell. Obstacles are already stacked against them considering their separate lifestyles. Tess lives a more pragmatic kind of life that includes excessively logical approaches and occasionally over-analyzing the people around her; considering she’s a therapist this is an occupational hazard that she brings into her personal life. She has a different taste in men, fashion, problem-solving, communication, and just about everything else. Meanwhile, Anna is far more flamboyant and creative, sparing no one of her in-your-face vibe and her punk-inspired music.

As if that weren’t enough of a strain, Anna’s brother Harry (Ryan Malgarini) is a problem factor, too. Naturally each family has its own form of sibling rivalry and its fair share of fights thereof. In this particular instance, Harry goes to extremes to annoy his elder sister—and Anna is usually the one to pay. Tess appears to baby Harry and favors him, even though Tess is probably unaware of her actions, it doesn’t make Anna’s life any easier, and it does nothing to smooth her relationship with her daughter.

Harry later admits to Anna that he actually admires his sister while she’s still trapped in Tess’s body, which seems to solve their own problem, but leaves the problem of Tess favoring Harry unsolved and unacknowledged. Something like that surely wouldn’t go away overnight. While Anna may now know how Harry really feels and may cut him some slack, they would surely still have their fights and their moments too. In which case, it’s expected to have that kind of dysfunction in the household. The thing that amplifies that dysfunction is when Tess takes sides, mostly Harry’s, and doesn’t give Anna a chance to explain or defend herself. 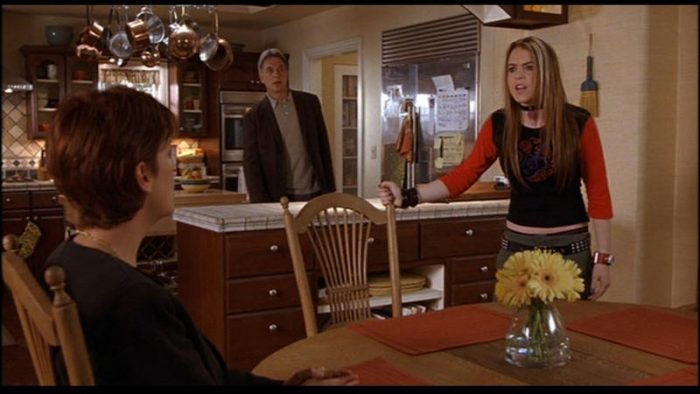 Perhaps what strains their relationship the most, however, is Tess’s fiancé, Ryan (Mark Harmon), whom she is set to marry on Saturday, the day following their “Freaky Friday.” It’s clear that despite the impending marriage, Anna hasn’t accepted Ryan into their lives and resents the idea of their blended family. Her father passed away years before and it’s clear Anna still struggles with this. In a flurry of Tess’s own happiness, as stated in the film, she overlooked what was best for her children and may have planned to marry Ryan sooner than she should have.

Tess desperately tries to get Anna to tell her why she won’t accept Ryan—and Anna doesn’t, until Tess, in Anna’s body, breaks down and tells Anna to put off the wedding as it looks like they won’t be switching back as soon as they had hoped. Anna’s moment of selflessness in which she proposes a toast and explains her true feelings regarding Ryan as she fulfills her mother’s wishes is what gets them to switch back.

Now, Anna had undoubtedly held some kind of resentment over Ryan for some time. Understandably, that particular Friday was an emotionally charged day. Still, in a realistic approach, Anna may be more accepting of the idea of Ryan but not enough to instantly cure any bad blood between them, as well as her and her mother, that had gone on for however long. Wouldn’t she still feel some level of bitterness towards Tess? Anna’s friends mention tidbits of what Anna told them; in those tidbits, Anna felt ignored and like her mother no longer had time for her and had chosen Ryan over all else. Problems like that don’t just disappear, however much we may want them to.

How It Would All Play Out

Dysfunction exists to some degree everywhere, in every family, in every relationship. It’s unavoidable, but there are some relationships out there where dysfunction is truly limited, almost illusory.

Tess and Anna may have a better relationship, but unlike the portrayal insinuates, it wouldn’t exactly begin anew. One day can’t solve a lifetime of discourse. Tess’s tendency to favor Harry, her relationship with Ryan and her personality clashes with her daughter would all still be factors and would all still contribute to the dysfunction of the family unit. Meanwhile, Anna’s frustration with her mother, her resentfulness of Ryan, and own struggles, magnified by her sensitivities and dramatic flair, would also pose issues.

Plus, take into account the fact that with Tess now married, their dynamics would more permanently shift to accommodate Ryan and to cater to their now-blended family. Adjustments would have to be made, and compromises with them. With the permanency of it all, it could very well get to Anna to the point where her relationship with her mother remains strained—just in a new way—and potentially be the cause for Anna’s frequent ventures outside the household that she may try to avoid. Additionally, this strain could by consequence place tension on Tess’s relationship with Ryan, and perhaps even with her son. A blended family may or may not work; it depends on the people involved. You just can’t force a family to come together, chosen or not.

On the bright side, despite some bumps in the road, the Colemans could very well have a happily-ever-after as all Disney movies do. Ryan had a cool manner that allowed Anna to accept him on her own time and in her own terms, something Anna appreciated. This approach could be key to molding a real relationship, permitting Anna to trust Ryan and for Ryan to act as her father figure—not as a replacement, but as an addition to what she previously had. Having gone so long without a father figure would also be a change to Anna and Harry, so again it could go either way depending on the people involved.

Despite the downplaying of family dysfunction in this film, we still love it. It’s nostalgic to anyone growing up in the late nineties and early 2000s, having introduced this timeless classic to a new generation. For anyone truly and deeply looking into the plot of Freaky Friday, perhaps it will help them navigate their own family dysfunction—or perhaps be grateful for the lack thereof.