Academy Award nominee Taika Waititi has proven he can do just about anything, be it an indie mockumentary or a big-budget “theme park ride”. Regardless of the dollars assigned by his financiers, Waititi makes his project uniquely his own, injecting his personal whimsy and one-of-a-kind voice to his work. But even his biggest fans might have initially raised an eyebrow at his most recent satirical endeavor.

Jojo Rabbit, currently in a limited release in the US, revolves around 10-year-old German boy Jojo (Roman Griffin Davis) during the waning days of World War II (all though the highly propagandized streets of Berlin fail to relay this fact to its citizens). Already active in the Hitler Youth, and dreaming of one day serving in Hitler’s prestigious personal guard, Jojo is all Nazi, all the time, adorning his walls with posters of the Fuhrer. In fact, so involved is Jojo in his blind fanaticism that his invisible friend and confidant is Hitler himself (played by director/writer Waititi). 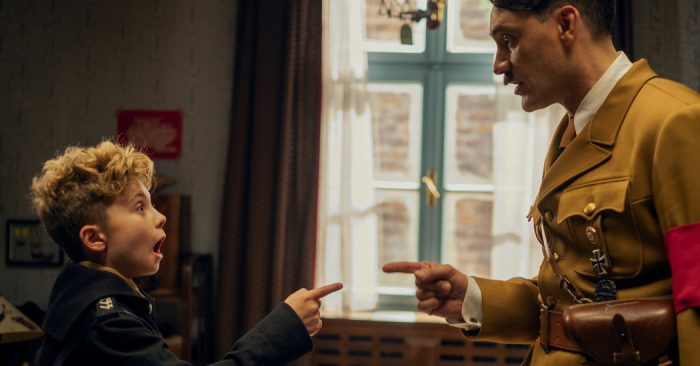 But everything Jojo stands for is challenged when he discovers his free-spirited mother (an excellent Scarlett Johansson) is hiding a Jewish girl named Elsa (Thomasin McKenzie) in his recently deceased sister’s room. Expecting Jews to be mind-controlling creatures with horns, no thanks to both the real and imaginary Hitler, Jojo’s perceived fight for survival against Elsa, the invading “monster”, becomes a lesson in tolerance and understanding that challenges everything he stands for.

Satire can be a difficult product to sell and audiences may have a tough time trying to figure out how to approach Jojo Rabbit or even how to watch it, hence the aforementioned eyebrow-raising of even Waititi’s biggest supporters. And indeed, in order to sell its themes of anti-hate and tolerance for all, the film must dedicate its first twenty minutes or so to extremely uncomfortable moments.

Jojo Rabbit opens unlike other tales of youth: with charming kids running through the streets to the sound of (German translated) Beatles music, excited to see their friends, waving goodbye to their mothers and…going to Hitler Youth camps learning to throw hand grenades and knives? The concept of the Jews as inhuman and Hitler as a messianic figure reign supreme and even Nazi soldiers played for camp, such as Sam Rockwell’s drunken washout Captain Klenzendorf, his beyond-loyal assistant Finkel (Alfie Allen), and the bubbly psychotic Fraulein Rahm (Rebel Wilson), produce uncomfortable laughs as the audience tries to find its feet.

Since Waititi must sell to us that our protagonist’s living environment is normal to him, he must plunge us into deeply uncomfortable portrayals of thoughtless racism, discrimination, and fear-mongering. For most of the audience, a goofy (pretend) Hitler cracking jokes or a Klenzendorf pratfall can provide a chuckle that makes said laugher turn around and check “is anyone else laughing too?”

Satire is not meant to be a comfortable exercise. It is supposed to expose something about our culture that is hidden or thinly veiled in real life by presenting it through an exaggerated and surreal lens. Something that is not quite thinly veiled in the United States at this moment time is a resurgence in white nationalism, Nazi values, and an “us vs. them” mentality that has our perception of the Other becoming increasingly more black and white. 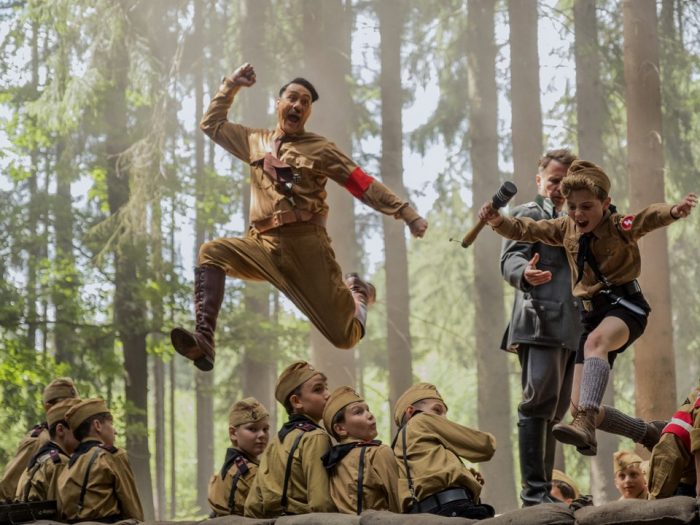 Despite taking place in World War II behind enemy lines, Jojo Rabbit’s themes of aggressive tribalization and, for lack of a better term, “fake news”, is incredibly timely. And Waititi’s ability to blend absurdist comedy with social messaging may be boundary-pushing, even to the most liberal, but is undoubtedly progressive. It never aims to humanize the Nazi culture or to demonize the Jewish religion. Instead, it succeeds in humanizing, well, human beings.

By drawing such fierce lines in the sand of good and evil in the film, it exposes how deep and nuanced all human beings are and how our surrounding environment can shape an entire nation into believing something truly dehumanizing. For those currently living in the United States, it sometimes takes something so epically insane to bring to light that which is in front of your face.

Waititi, known for his unique brand of comedy, adds additional tones to his narrative. While getting used to a funny Hitler is bold enough, Waititi throws in genuine moments of horror and drama that the advertising campaign and the director’s prior filmography did not prepare you for. There are two moments in the film that are so chilling that at one point I audibly gasped so loud, a few audience members turned to see my reaction. Jojo Rabbit is not only funny and important but also deeply affecting.

On the production side of things, Waititi’s direction is energetic and proudly anachronistic. His choice of music is charming and unexpected while the snappy dialogue dips between being period-accurate and hilariously 2019. On the acting front, Scarlett Johansson continues where she left off in Avengers: Endgame by providing a nuanced and deeply effective performance. While Johansson has always been good, she has noticeably stepped up her game of late, ditching the slightly monotone “coolness” and showing a vulnerable and charming side to her acting.

The supporting cast is, as expected, phenomenal. Waititi needs no introduction to the comedy scene as he’s stolen just about any project he’s acted in. But Sam Rockwell, Alfie Allen, Rebel Wilson, the young Archie Yates (as a Norm-From-Cheers like friend of Jojo’s), and Thomasin McKenzie bring warmth and depth to their roles. Playing against type, Stephen Merchant also appears, playing a spine-tinglingly menacing Gestapo.

But the true revelation is Jojo himself, Roman Griffin Davis. To steal the show from such an impressive cast is a tall ask but Davis delivers not only charm, cuteness, and laughs in spades, but delivers some heart wrenching dramatic moments that bring a tear to the eye. Hopefully, we will see more of him in the future.

Jojo Rabbit is a triumph of satire, comedy, and drama and should be seen, with both the young and the old, on the biggest screen possible. In this day and age, we need to laugh at ourselves and learn something about the world we live in. Jojo Rabbit provides that and more.