Sometimes it isn’t the project that needs to excel to wow an audience, but the pieces that go into it. Netflix’s newest biopic Dolemite Is My Name doesn’t break any new ground with its A-B-C storytelling but it does allow it’s cast and impressive production staff to make up the difference.

Eddie Murphy, the star of the film, has long been maligned for poor film choices that go with insane paychecks. Even when he would get that rare win, such as his Oscar-nominated turn in Dreamgirls, he’d throw his award chances in the toilet by releasing cinematic dreck like Norbit to sour the idea of Eddie Murphy: Serious Actor.

But finally, Netflix’s newest streaming production, available to stream now and in select theaters, has found a way to harness Murphy’s tremendous energy, charisma, and vulgarity and channel it into a viable piece of entertainment. And instead of making Murphy do all the heavy lifting, the producers have surrounded him with an all-star supporting cast as well as a dedication on the production front to provide a historically accurate and engaging atmosphere that is impossible to look away from. 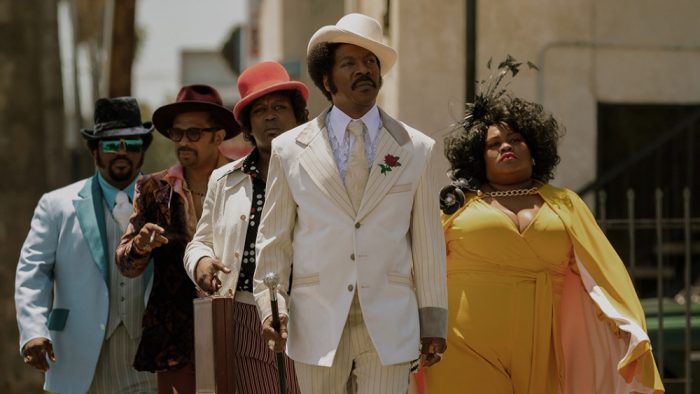 Rudy Ray Moore (Murphy) will do anything to become famous. He’s cut records singing out-of-date doo-wop, attempted stand-up comedy, and it is even hinted at that he’s tried dancing. But he can’t seem to catch a break (not even the local radio DJ at the record store Moore works at, played hilariously by Snoop Dogg, will play his old 45s).

One day, while kicking out a local bum from the record store, Moore hears the homeless man’s rhythmic pattern of storytelling and shit-talking, a precursor to what would become rap, and thinks he might have finally found his in. After trying out his new schtick of flamboyant (and vulgar) poetry as the pimp superstar Dolemite to an unsuspecting crowd leads to rapturous applause, Moore cuts a new kind of record: a comedy album.

With a grassroots success on his hand and a decent amount of money flowing in, Moore sets his sights higher: the movies. He wants to bring Dolemite to the big screen, complete with kung-fu, naked women, and random explosions. But making a movie is a lot harder than Moore expected, from the money to the equipment to the barriers erected because of the color of his skin. But like everything else, Moore will do anything to make his dreams come true. 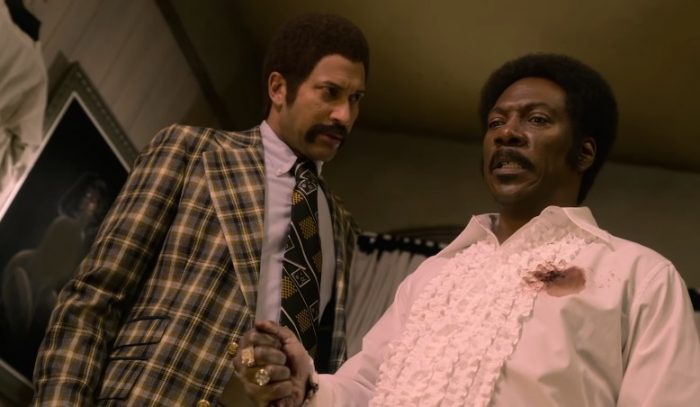 Dolemite Is My Name’s story works, despite taking little narrative risks, because it plays much like Ed Wood: it provides a feel-good story of positivity and creativity winning the day against all odds; where the journey of passion means more than the final product.

The film Dolemite may indeed be an amateurish mess, but it is one fueled with passion and drive and, like Plan 9 From Outer Space, that’s all that’s needed to consider the final product a success. I can’t speak to how accurate the history portrayed is, and there is a strong sense that the whole thing is heavily sugar-coated to provide those good feelings, but it is nice to see a film about artistic breakthroughs that is devoid of cynicism.

Besides Murphy’s wonderful performance, Wesley Snipes may steal the whole movie as “legitimate” actor/director D’Urville Martin, who is constantly teased for embellishing how he was “directed by Roman Polanski” in Rosemary’s Baby. The clearly coked-out-of-his-mind D’Urville may be cartoonish but since the film is dedicated more to laughs and positive vibes than narrative accuracy, this is a welcome addition to the proceedings.

The other nice find is TV/Film veteran Da’Vine Joy Randolph, who plays one of Moore’s partners in crime, Lady Reed. Thankfully for the character, they allow her to be strong and funny without forcing her into a romance or by adding saccharine subplots about being a single mom just trying to make it. She becomes “one of the boys” quite easily and the movie is all the better for it.

Director Craig Brewer (Hustle and Flow, Black Snake Moan) sets everything up nicely by creating a colorful atmosphere. The real credit, however, must go to Ruth E. Carter, Black Panther’s Oscar-winning costume designer, who provides some of the best costume work of 2019, if not in the last five years. All the outfits, as flamboyant as they are, feel lived in and tactile. For a movie so focused on a specific time period, that sense of realism is a necessity.

A return to form of one of Hollywood’s most energetic celebrities, a scene-stealing supporting cast, solid direction, and production design to die for? If you haven’t figured out yet if I recommend this movie, I will let Rudy Ray Moore end the discussion here.

Dolemite is My Name is available to stream now on Netflix.