With few exceptions, Terminator films seemed destined to tell the same story over and over again. The only thing that changes is the variables thrown in. Terminator 2: Judgment Day is a fantastic sequel to the first film, The Terminator, despite telling the exact same story virtually. It is the new variables thrown into the plot soup that made it fresh and exciting. Arnold Schwarzenegger is the good guy now! Sarah Connor got buff and might be crazy! John Connor is kind of a little shit! The bad guy, the T-1000, is far and away stronger than Arnie, making our new hulking hero, previously thought invincible, the underdog!

On the reverse side, Terminator 3: Rise of the Machines is a bad sequel to the first two films in that it told the same story but barely changed any of the variables. The most drastic change was the T-1000 fill-in was a female, and John Connor was grown up (though I will say, it does have a pretty good ending). Terminator: Genisys continued this troubling trend. The plot is virtually identical to T2 and T3 but adds some super confusing time-travel/alternate reality mumbo jumbo to create…pretty much the same exact stakes. You know what happens when you make a copy of a copy of a copy, right?

Terminator: Dark Fate’s primary goal is to fix the inherent problem of the franchise copying its predecessor’s near-perfection and, instead, evolve from it. James Cameron, who co-wrote and directed both T1 and T2, returned for Dark Fate as a producer with a story credit and confirms that Terminator 3 onwards never really happened. So, in actuality, Dark Fate is Cameron’s T3, offering the audience a direct continuation of T2, which is arguably (barely) the last great Terminator film. But does Cameron’s presence manage to make Dark Fate rise above the failures the franchise previously offered?

Judgement Day never happened, thanks to Sarah Connor (Linda Hamilton) and her son John (played, with CGI trickery by Edward Furlong). But despite winning the future war, one remaining terminator from that extinguished future has caught up to Sarah and John and successfully terminated its target. Sarah is left cradling John in her arms, able to save billions but not the one person she loves.

Decades later, Sarah is a Terminator hunter, getting tips by an anonymous source that there are still cyborgs from the future out there hunting targets that might put the future back on course. She has eliminated all her targets over time but may have met her match when she finds a new type of shape-shifting terminator called Rev-9 (Gabriel Luna) who is out to kill a young girl named Dani (Natalia Reyes) who may, someday, give birth to the leader of a new resistance.

Luckily for Sarah and Dani, an augmented super-soldier from the future, Grace (Mackenzie Davis), has come to help. Together, all three women must flee the near-unstoppable Rev-9 from killing Dani and letting a different version of Judgement Day come to pass.

Replacing Cameron in the director’s chair for Dark Fate is Tim Miller, who is fantastic with action, previously providing high-octane thrills in his directorial debut Deadpool. And since the Terminator franchise is an action-first franchise, Miller doesn’t disappoint with his approach to Dark Fate. Whereas previous non-Cameron Terminator films have felt too computer-generated, Miller’s mixture of practical stunts and appropriate levels of CGI make for some legitimately exciting action scenes.

A lot of the tension of the film revolves around our heroes being continuously pursued without much time to breathe and Miller’s excellent sense of scale and ever-growing stakes make up for some of the narrative short-comings when there happens to be a quiet moment. Comparing him to a legend like James Cameron isn’t exactly fair but Miller does what he can with what he is given.

And it isn’t like Dark Fate doesn’t try to do something new with its narrative (remember those variables?). There are four or five avenues that the screenplay opens up, all involving subverting expected outcomes or adding new dimensions to previously understood concepts from the franchise. But each time the film begins to go down one of these intriguing paths, it swerves back to a more rudimentary plot structure and leaves great ideas behind.

For instance, Sarah Connor begins to tell Dani about how Dani herself isn’t of any value; only her womb is. This opens up the male-female dynamic Cameron brought up in T2 when Sarah discusses man’s need to destroy and women’s ability to create. But it is quickly lost with another scene of action. The same happens when it is revealed Schwarzenegger’s T-800 can actually grow a conscience and evolve beyond its programming. Hitting me in all the right places (I adore an AI story more than almost anything else), it only lasts an unforgivable few minutes before moving on to the next action set-piece. 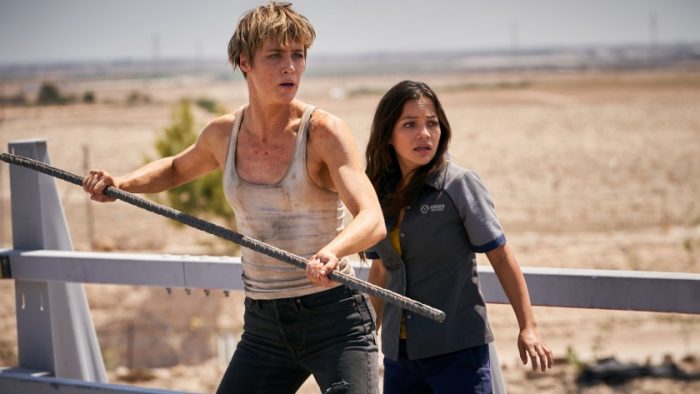 Other missed opportunities is the discussion that man destroying itself is inevitable; something echoed in T2 quite often (as seen here). While Dark Fate, as expected, mentions fate a lot in its story, it is often on the positive side (“there’s no fate but what we make for ourselves”, etc.). But hidden behind the ever-moving plot is the possibility that no matter how many times the future changes or a select group of people get together to stop a bad guy, it is all for naught. But this insightful look at humankind’s greatest weakness is brought up and then abandoned, leaving many a viewer, I’d assume, frustrated.

One thing Dark Fate does really well that prior sequels especially did not, is limit Arnold Schwarzenegger’s screentime. This is not a discredit to Arnie, who is actually fantastic in Dark Fate. But prior films thought that Schwarzenegger simply showing up filled an audience desire. And Schwarzenegger is fine in all those sequels but in the Cameron editions, he feels like an actual character. And the plot of Dark Fate doesn’t demand his constant appearance. This restraint on the filmmaker’s part provides us with one of the most affecting Schwarzenegger performances in years, if not decades.

Thus Dark Fate continues Cameron’s feminist trend by essentially being about three women: augmented super-soldier Grace, played with spirit and attitude by Mackenzie Davis, the woman of the future Dani, a strong Natalia Reyes, and, of course, Sarah Connor herself, played by Linda Hamilton, who continues her truly badass transformation from T2 but now with extra layers of grief and pain that two-plus decades of stress and loss add.

Gabriel Luna rounds out the core cast as the villain, Rev-9. Terminator movies have never seemed to solve the T-1000 problem from T2. Robert Patrick’s T-1000 is one of the greatest cinematic villains of all time, and his presence is so pervasive that even when he is not on screen, you can feel him somewhere in the background. Luna might be the closest thing to Patrick we’ll get as yet another Terminator film has a liquid metal, near-indestructible bad guy at its core. Luna has some personality and menace and that is much needed for what is the franchise’s albatross of being unable to create a new type of enemy.

Despite some narrative potential that goes wasted, Dark Fate is, without a doubt, the best Terminator film since T2. And as a direct sequel to T2, it seems a fitting conclusion (maybe?) to the saga Cameron created. There is tension, there are thrills, there is emotion, and there are, most importantly, ideas at play. The execution might not be perfect but the film is still recommended viewing.

Terminator: Dark Fate opens nationwide in the US on November 1st. 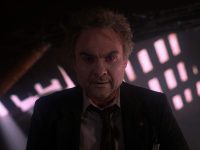