“Oh, why aren’t they doing
Tomorrow’s new dance steps
The way they used to yesterday?”

Saying a film is “ahead of its time” is a cliche at best, but for Shock Treatment the phrase fits like a little black dress. The much-maligned sequel to “The Rocky Horror Picture Show” has aged like a fine wine, to the point that it reflects the garish world of reality TV presidents and social media influencers that we now find ourselves in.

For years, I’d only heard about Shock Treatment in passing from other Rocky Horror fans. Comments ranged from not-so-great to the standard “the songs are better” and also “it’s not a sequel, it’s an equal.” When the film was released on DVD in 2006, I bought it sight unseen. I had some vague notion of the plot: Brad and Janet Majors (now played by Cliff De Young and Jessica Harper, respectively) returned to their hometown of Denton only to find it had been transformed into a television studio by fast-food tycoon Farley Flavors (also played by Cliff De Young) and they are propelled into back-to-back episodes of game shows and soap operas showcasing the Majors’ rocky marriage and small-town politics in one.

Originally pitched as “The Brad and Janet Show,”  (and “Rocky Kicks Up His Heel” before that) the concept was morphed out of necessity. Due to a guild dispute, they could not shoot on location, so the production was filmed on a soundstage and the concept of reality TV was born a decade too early. The whole town seems pretty excited, though, and they give it all with their own anthem simply entitled “Denton, U.S.A.” which opens the Denton Dossier, a show lead by newly divorced Betty Hapschatt (Ruby Wax) and Judge Oliver Wright (Charles Gray).

If you roll with the concept that the events of Rocky Horror turned Brad and Janet into completely different people (a la Moira Kelly retroactively morphing into Lara Flynn Boyle in “Twin Peaks”), it helps set the tone for this neon and floodlit nightmare. The couple argues about their issues with each other on the first-ever episode of Marriage Maze, hosted by Bert Schnick (Barry Humphries). The song is set during a commercial break and Brad and Janet call out the advertisements as they go:

“Shower curtain
Oh won’t you help me to be certain
Oh, toothpaste
Don’t you put the squeeze on me
Depilitator, why are we always sooner or later
Bitchin’ in the kitchen or crying in the bedroom all night?”

I jokingly say that “Bitchin’ in the Kitchen” is the best country song ever written. Every lyric is a hook. Richard O’Brien is a genius songwriter. His observations of all things American are not only catchy, but they are also hilarious and right on the nose. It’s true he restructured many of the songs to better fit the plot of Shock Treatment, but they work fabulously in their own way. (Sorry, not sorry.)

Marriage Maze ends on a downer and Brad gets sent to Dentonvale, a General Hospital knock off starring a medical cast of Dr. Cosmo McKinley (Richard O’Brien), Dr. Nation McKinley (Patricia Quinn), Nurse Ansalong (Little Nell) and “Rest Home” Ricky (Rik Mayall). Janet’s left to fend for herself, although she takes comfort at her parent’s guest-starring stint on Happy Homes only for her father to pop off with a right-wing rant entitled “Thank God I’m a Man” on what a “real” man is WHILST MOWING FAKE GRASS and a garage with a very presidential looking seal to boot. (The only thing missing is a red ball cap.)

Sound familiar? What year is this? (Also, the DTV audience is hanging on every word – and even agrees at some points during the song.)

Meanwhile, the cast of Dentonvale is told the real reason for Brad’s time on the show: Farley Flavors has an idealized dream of the girl next door and wants Janet as the face of the yet-to-air Faith Factory show where he plans to convert viewers to his ideology:

“Oooh, I’ve got the sight
And I’ve seen the light
And I’m gonna see the coming day
When the sun in the sky
Is a spotlight just for me” 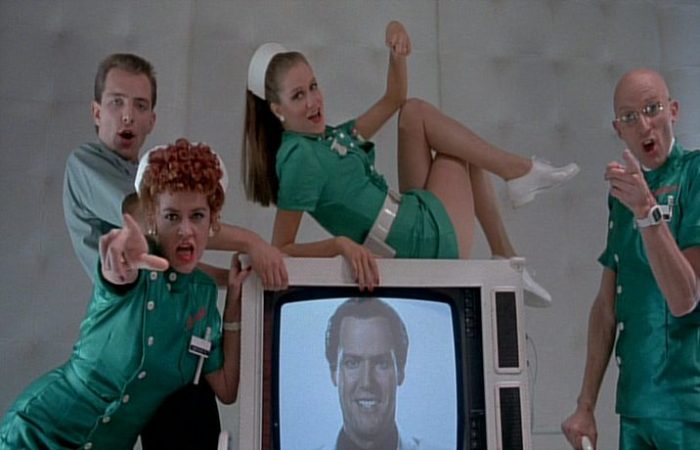 Farley does this by video message, or what would be equivalent to the Snapchat or Tik Tok videos of today. Janet is flattered and she agrees and she gets a full makeover complete with a little black dress and a self-obsessed personality reflected in “Me of Me.”

Feeling like the phenomenon she is, Janet runs over to Dentonvale, iconically claiming in the most Franknfurter moment of the film: “I’ve just come to tell you how fabulous I am.”

But the perils of fame rear their ugly head and Drs. McKinley knock Janet out with a pink cocktail when she gets too extra for them. Brad, who’s also been given every drug known to man, meets his wife in their neon-soaked dream state, looking for answers to their current situation.

“Oh, we’re all living
Like there’s no tomorrow
The way things are going
That’s probably true
But without you and me, sis
The world would fall to pieces”

Their new reality of living in DTV has ruined their lives. While Rocky Horror was about sexual awakenings and identity, Shock Treatment reflects multiple concepts at once: fame, politics, mental health, mob mentality, and the so-called American Dream. Farley Flavors’ advertising is both steeped in red, white, and blue star-spangled everything, but the symbol of his F-filled brand immediately conjures connections to fascist regimes. Hell, Farley might think he’s an ace, but he even looks like a Trump.

The costumes reflect the then-new era of the 1980s with strong lines and pops of pastel, neon, and jewel tones. Janet may be in an LBD, but it is sequins from sleeve to slit and her red pumps recall Dorothy’s ruby slippers as she’s courted by the man behind the Home of Happiness sign. (We’re not in the real world anymore, Toto.) 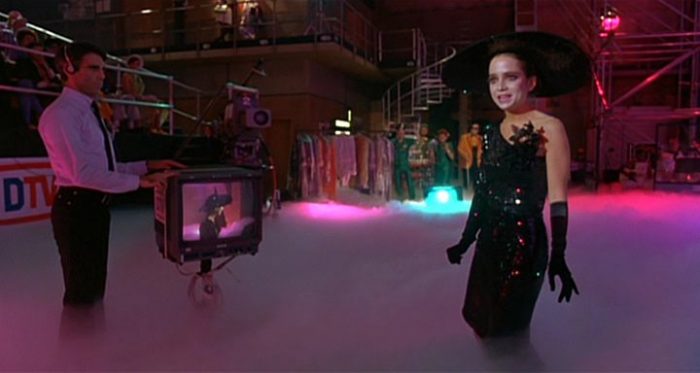 Shock Treatment has the supporting cast of Rocky Horror backfilling new roles, but it’s the recast leads that really shine in this film. Susan Sarandon’s Janet was wide-eyed and willowy, but you can tell Jessica Harper’s Janet has seen some things and is tired of Brad being back on his bullshit again. (Did Dr. Frankenfurter teach them nothing?) She also sings like an angel and I find myself more often than not listening to (and singing along with) her songs as Janet. Cliff De Young is a real revelation playing not one but two roles with the bumbling but well-meaning Brad and the sleazy Farley Flavors. The two collide later at the first episode of Faith Factory which is nothing more than a rally for Farley wanting to “take over the entire human race.”

Thanks to Betty and Judge Wright’s detective work, it’s revealed that Farley and Brad are actually twin brothers who were separated when their parents died and the doctors of Dentonvale are con artist actors. Farley has been out to steal Janet out from under him because “she represents everything he was denied.” Brad confronts Farley in a literal “Duel Duet,” full of clean white corridors, fog and lyrics like “You’re a dead end, dead beat, nowhere Mister / With a kiss like a Mississippi alligator’s sister.” (Yes. REALLY.)

Farley tosses Janet aside for what his real goal has always been: converting Denton to his beliefs. The DTV audience is happy to head to Dentonvale not understanding they are committed to his cause for life. Brad, Janet, Betty, and Oscar Drill and the Bits hotwire a car and get the hell out of DTV studios, with an unseen announcer entoning “The sun never sets on those who ride into it,” and the Denton logo emblazoned in red and blue neon.

The truth is Denton could be anywhere in America today at this very minute. Self-obsessed pseudo-stars hawking products with virtual audiences raving or raging, “old-fashioned” values rearing their ugly head in the face of progress and a literal reality TV star as the so-called thought leader of our nation. This movie came out in 1981, so either they were way ahead of the curve, or things never really change at all. If Rocky Horror’s life lesson was “Don’t Dream It, Be It,” then Shock Treatment’s is to truly “Keep Going, Anyhow, Anyhow.”