Menu
Search
Menu
Search
I haven’t played a strategy game in many years. I’d spend hours upon hours playing games like Populous and Theme Park on the Amiga back in the 90s, so I was both excited and sceptical when I first found out that Frostpunk was coming to consoles.
Frostpunk is a city-building game with a survival story and it’s been around on PC since April 2018. I worried about how I’d get on with it on my Xbox because these kinds of games can feel awkward with a controller instead of mouse & keyboard, but there are absolutely no issues with Frostpunk. If anything, I found the control scheme extremely streamlined and accessible straight away. The decision to make the game focus on a small, specific area of your city means that moving around it feels smooth. The camera controls are responsive and make it easy to navigate around your city. 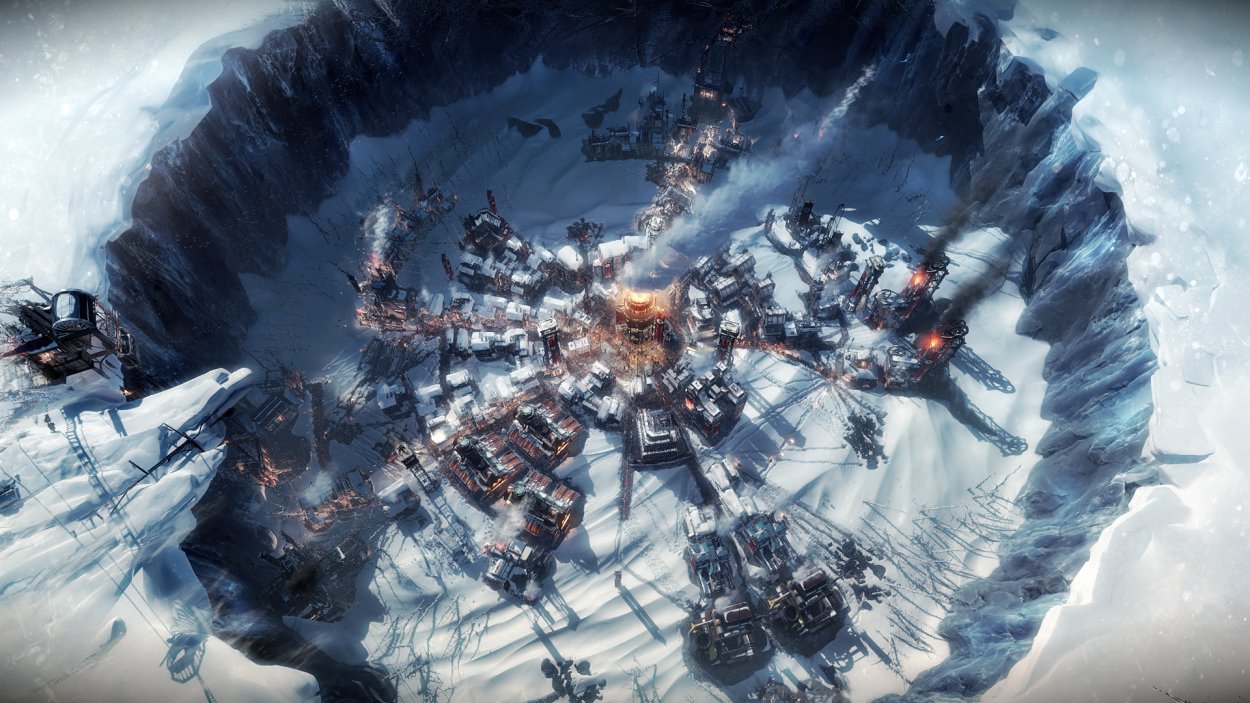 Well, the game is set in an alternate 1886 where the eruptions of Krakatoa and Mount Tambora, the dimming of the Sun, and other unknown factors caused a worldwide volcanic winter. This, in turn, led to widespread crop failure and the death of millions. It has forced humanity to rebuild in a new region. The only hope is to settle around a central generator that provides heat, and therefore life, to your dwindling population. The traditional mechanics of resource gathering and building homes for your people are all here. But if anything they form an almost secondary role to the ultimate goal here, which is simply to survive. Not allowing your people to perish in the bitter cold is where your focus will remain.
The temperature at its highest is -20 degrees celsius and can get much lower. Homes and buildings need to be kept at a certain temperature for them to function correctly, so the number one priority is to keep them, and the people inside them, warm and well. 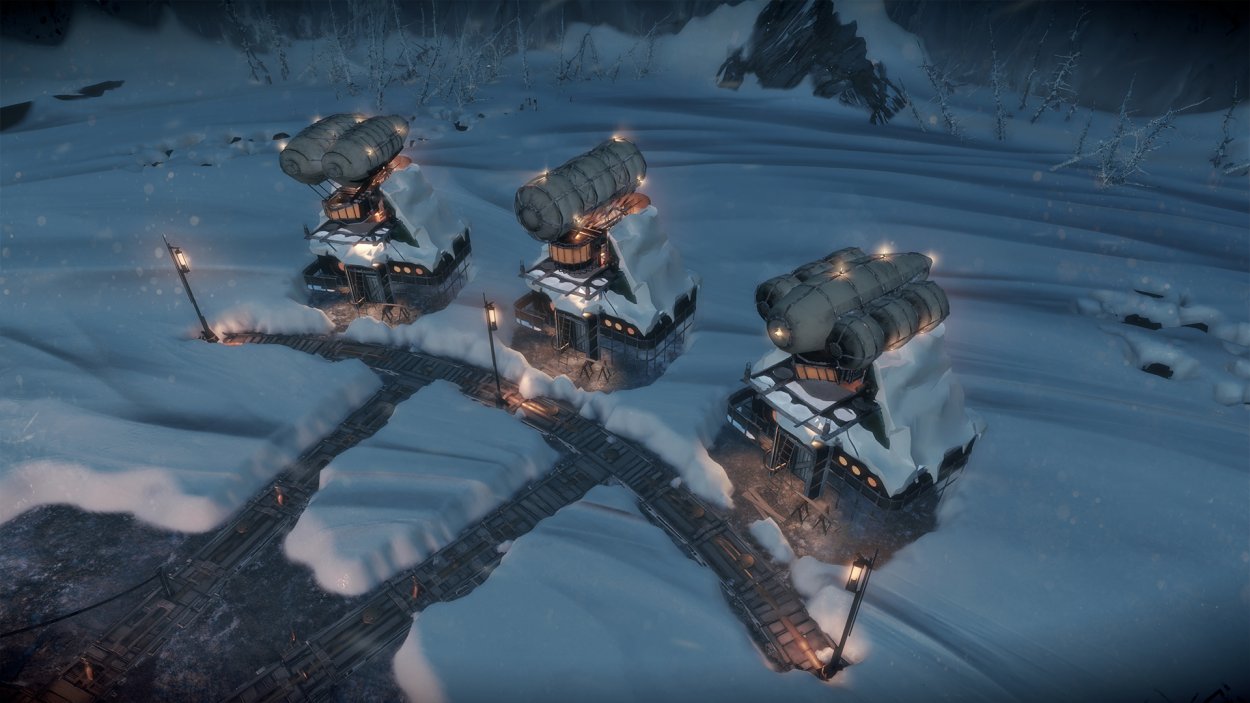 I’ll get my one and only gripe about Frostpunk out of the way: there could have been a longer tutorial. I kind of feel like I was thrown into the deep end and some things weren’t explained very well. But this game is punishing—not least due to its harsh environment, but the many variables you have to juggle to survive—so coming to terms with the enormity of the situation you’ve found yourself in, kind of makes it all the more immersive.
With that being said, I found Frostpunk to be a dark and atmospheric experience. The setting, music score and ambience really pull you in. Most games of this genre are about prosperity and are positively happy. This couldn’t be further from the truth in Frostpunk. This is bleak. Yet somehow, this only makes your need to survive even more desperate—it gives you a real drive to make things better for your people. But it won’t be easy. It’s highly likely your first couple of attempts will result in failure, and it will seem a little overwhelming. But if you persevere, things begin to click, and the game sprawls out in front of you. There’s also plenty of content here too for those who stick with it. Not only is there a meaty main story peppered with challenging events to overcome, but the more time you survive in the frigid wastes, the more additional scenarios you can unlock. These pose different starting situations and restrictions on you, giving you different objectives, and are a great way to mix up the gameplay from the main story. 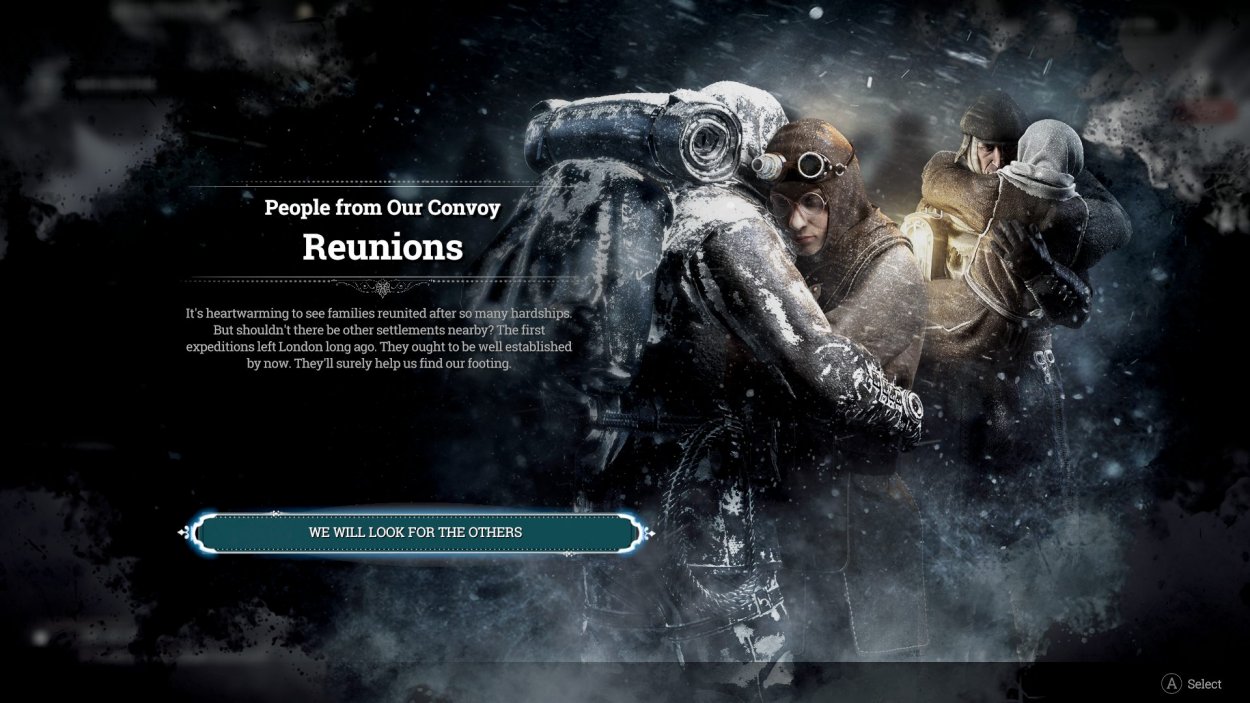 There are many very tough decisions to be made and laws to be mandated. I decided to go against everything in my real personality and play as a dictator type, like the North Korean version of Santa Claus. For example, I’m trying to bring gifts to the settlement, but my people will have to work 24 hours a day to achieve our goals. Of course, you can play in various ways, and you don’t have to be so demanding but the options are few and far between. There are no easy decisions to make; do you leave the sick and wounded to die or make them amputees? You need more people to work to keep the coal burning, but do you put children to work in these terrible conditions? It’s grim out there in the freezing temperatures and the people have to work hard to keep supplies coming and to build the necessary accommodation to keep people warm, fed and content. Whatever choices you make will affect your people. Despite the difficult circumstances, they could remain hopeful. Or the conditions could get so bad that discontent reaches a high and productivity slows down. Either way, you have to be cruel to be kind. 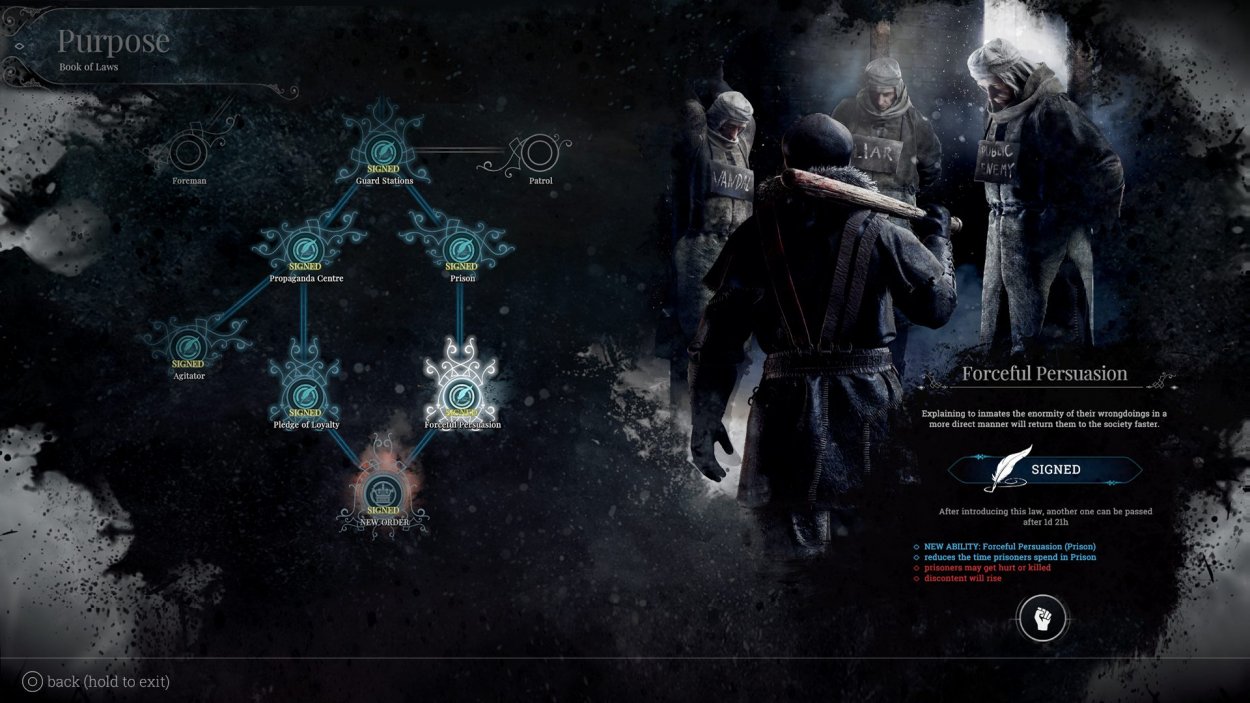 Managing your people’s hopefulness and discontent is also critical to your leadership. If they lose all hope in your ability to rule them or become too angry with your decisions, then your life is finished, instead of theirs. Often you’ll be presented with options or choices that affect hope or discontent in certain ways. Sometimes you’ll choose outcomes that feel right, but your task will be to manage how people feel towards you, to ensure you’re still in a job. It’s an overlay that perfectly compliments the feeling of dealing with individuals that you care about, and struggling through this cold, harsh adversity together. 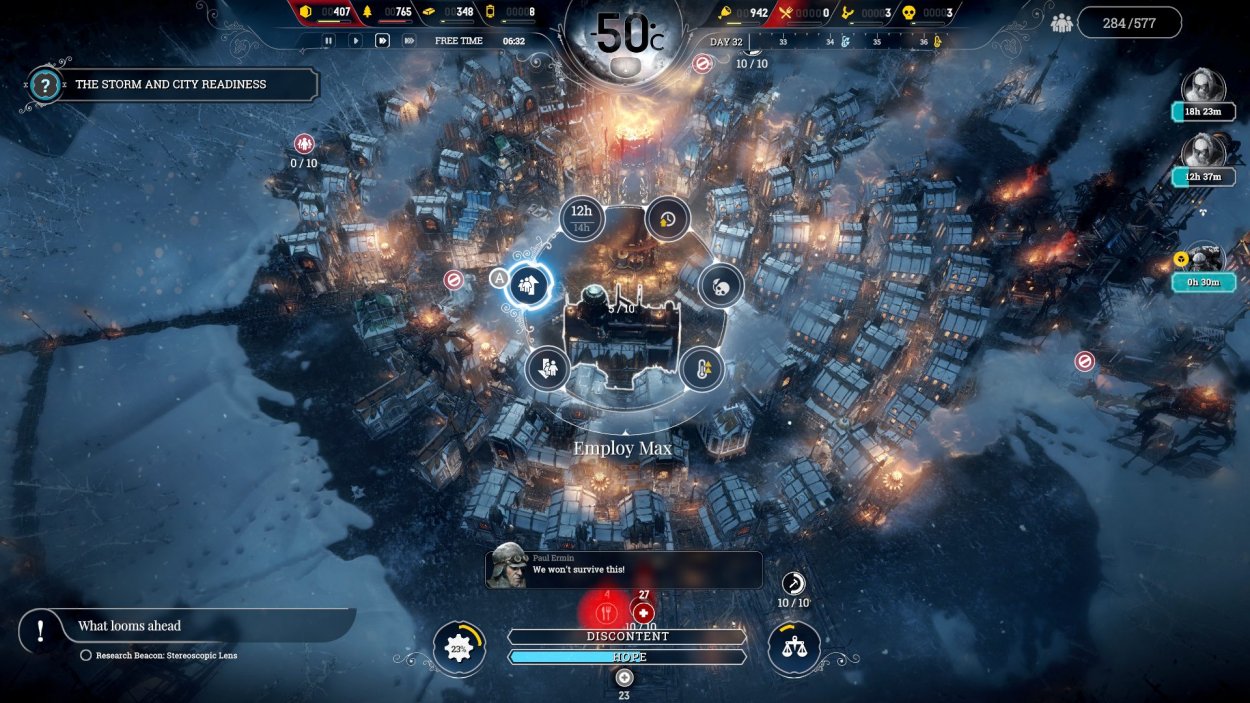 It’s not often that a game like this tugs at your heartstrings, but Frostpunk does just that. The setting; the desperation; the mood meters; the tough decisions: all of it makes you care about the people under your protection. Your choices are, more often than not, a matter of life and death—and death is permanent. You feel like a parent of the people, one who holds their very existence in the balance—I guess in that sense it is a god game too. The depth of the mechanics means you always have a fighting chance though, even if you’ll fail a few times along the way. You’ll try different strategies to see what works and what doesn’t and slowly build up your experience. And when you do succeed, it’ll feel twice as good, as you’ve come through it with your people together. Frostpunk—despite its almost heartless setting—creates an emotional connection.
There are many lovely little touches I loved about my time so far with Frostpunk. You can hover the cursor over people and hear their conversations which makes you feel closer to them. When you introduce a new law, the town cryer rings a bell and informs the residents and you’re able to zoom in closer to the crowds and see your survivors carrying heavy bags of coal and supplies.
I can see myself spending many hours with Frostpunk. I haven’t played anything like it on the home consoles in many years, and the developer, 11 Bit Studios, has done a fine job creating a believable, depressing and desperate world that I want to keep alive.