Even back as far as the first season of Mr. Robot, viewers have learned to question what they’re seeing. Elliot is the ultimate unreliable narrator. After the Season 2 reveal that during all of the scenes with Elliot sitting court-side at pick-up basketball games, in reality he was actually in prison, I have never really been able to 100 percent trust my eyes while watching Mr. Robot.

Season 3 seemed to scale things back a tad in this regard, but the current season has me massively suspicious all over again, especially after watching this past week’s fantastic episode, “405 Method Not Allowed.”

As 25YL colleague Caemeron Crain pointed out in his weekly analysis of the episode, there were a number of moments during Elliot and Darlene’s break-in of the Virtual Realty building that really pushed the boundaries of belief. For example, Elliot is able to barge through the closed bus doors after being stopped by the police, and Darlene is able to escape the building, while posing as someone leaving the gym, without being questioned.

Yes, it’s possible we’re just supposed to accept what happens at face value, and just shut up and enjoy the episode for its brilliance and unique silence.

But for me, the break-in and chase scenes raise so many flags that I have to question if these events truly happened. And after watching the episode a couple times, I think I’m now leaning toward thinking that these scenes did not really happen.

For starters, and what really struck me when I first watched “405 Method Not Allowed,” Elliot acts very different throughout. He’s not his usual timid self. He’s basically acting like a character out of an action movie: strong, fast, quick-headed. Elliot just seemed like a new person to me. 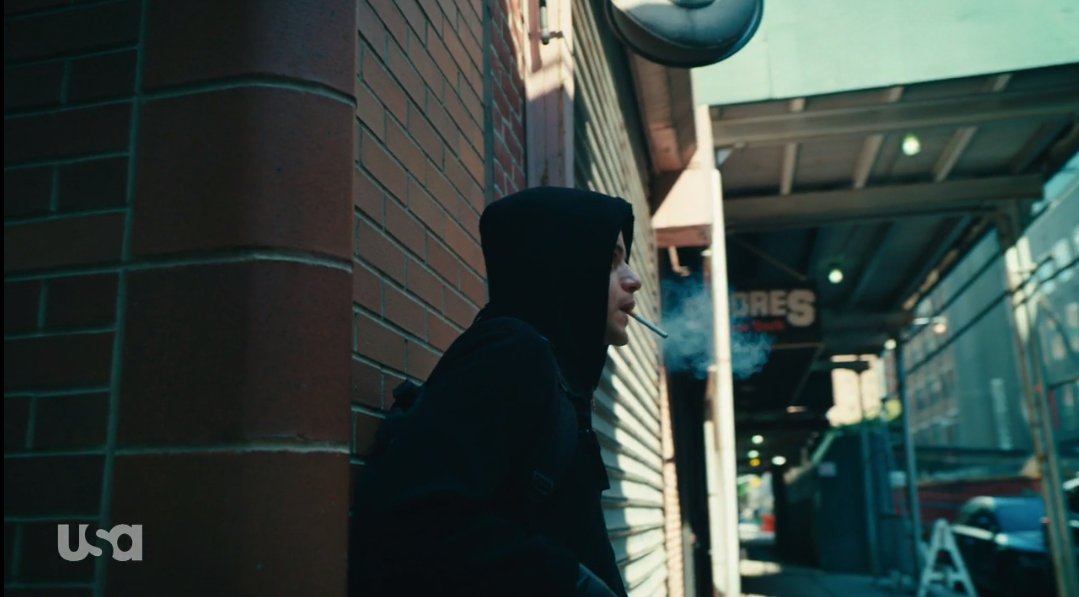 Right before entering the Virtual Realty building, Elliot smokes a cigarette (and looks like it might even be the last one from the pack). I may be wrong, but I can’t recall Elliot smoking before, and it seems very out of character. It could have been used as a “cover” for why he was standing outside the building, but that seems unnecessary. I think it was done to show a difference in what we normally see in Elliot.

An initial thought I had: Are we seeing the “third” persona here? Mr. Robot does not accompany Elliot at all during these scenes, so maybe this is that mystery persona. An Elliot who can run really fast and who smokes cigarettes.

A few other details from the break-in raise questions for me as well. Price receives a text from Elliot at 10:50 am, so 10 minutes before the heist begins. Would this really be on his to-do list to casually text Price at that moment? I mean, it’s not out of the question, but it seems odd. And what I find really interesting: near the end of the episode, Price texts Elliot that he has received the time and location of the Deus Group meeting. In this shot, Price’s phone lists Elliot as “Elliot Alderson.” In the shot earlier when Price receives the text in the restaurant, his phone only has “Elliot” as his contact. Does this mean anything? Or is it just an unintended inconsistency?

When Elliot and Darlene are hacking the servers, how does Dolph the security guard not find them?? They’re just sitting still in one place and typing loudly! Why wouldn’t he check every row?

So many more moments in the escape and chase scene came across as unbelievable (so unbelievable that it felt out of place on Mr. Robot), including Darlene conveniently finding workout clothes in a random office room, and when I first watched the episode, I kept thinking this wasn’t real. But then the viewer is led to believe that these events do in fact occur.

After Elliot ends up in Darlene’s car and the two are holding hands, we get a look inside Dom’s family’s house. A TV news report says “Yuletide Mayhem at Central Park,” which could point toward the chase scene actually happening. However, it’s not for certain. Elliot’s picture isn’t shown on the news, so it’s possible it could have been something else entirely.

Shortly after seeing this news report, Dom receives a text from Janice:

new assignment. need you to find a couple of troublemakers for me. This is a 911 scenario, so chop chop.

In another text that follows, she sees a red-light camera shot of Darlene and Elliot driving. I initially thought that this basically proves that the chase scene, including Elliot miraculously jumping off a cliff to the exact location of Darlene’s car, actually happened. We’re probably led to believe this camera shot was taken as Darlene and Elliot were escaping the police, post-hack. However, Darlene is not wearing the track jacket she used to escape the Virtual Realty building; she’s wearing her winter jacket and a hat. This is what she was wearing when Elliot climbed into her car after burning the van in Pike’s Hollow. So the picture likely was taken after the duo leaves the burning van—maybe from the Pike’s Hollow camera that Dom gained access to—leading me to finally believe the Virtual Realty break-in didn’t really happen.

So if the break-in and subsequent chase through New York didn’t happen, what was it? Was it all a dream? Elliot and Darlene do seem to really rush into things after they return from Pike’s Hollow, apparently without sleeping or at least resting. A dream seems possible.

Was the trip to Virtual Realty instead a trip within a world of virtual reality? I actually get a bit of a Ready Player One (a book/film that borrowed a lot from and honored the 1980s, just like Mr. Robot does) vibe from the hack scene. There’s intense music. There are many moments that don’t quite seem realistic. It’s almost like a video game. Is Elliot in (possibly with Darlene accompanying him) some variation on the OASIS, an epic virtual-reality software device, acting out a hacking simulation and then needing to successfully escape the police? Is it related to Whiterose’s project somehow?

Regarding Whiterose’s project, we have been given hints that it may allow people to visit with loved ones who have passed away. Angela believes she may be able to see her mother again at the hand of the project. Perhaps the project can’t literally bring back the dead, but maybe it can take the living into a virtual world in which anything is possible—including visiting the deceased. If this is the case, perhaps we are seeing Elliot interacting in this virtual world throughout Season 4.

It has also been hinted that Whiterose’s project involves parallel universes. Maybe that’s where the Virtual Realty break-in and chase takes place: an alternate reality that runs alongside our main timeline. Like in Back to the Future Part II, when Marty finds himself in a world in which Biff has basically become Donald Trump. I do expect parallel universes to crop up at some point in Season 4, but I’m not sure that’s the answer in this case.

However, there have been a number of other moments throughout Season 4 that have made me question if what I was seeing was truly “happening” as we see it. Maybe we have seen alternate realities at some of these times.

The excellent Episode 4 drew many parallels to the Sopranos episode “Pine Barrens.” But what if it’s deeper than just an homage? The area in which Elliot and Tyrell end up trudging through the woods at night—Pike’s Hollow—is not an actual location. But interestingly, the name Pike’s Hollow is actually mentioned in the Sopranos episode. While Paulie and Christopher are lost, Paulie calls Tony Soprano and tells him they are in “Pike’s Hollow or some shit” in hopes that he will come pick them up.

What if this Mr. Robot episode wasn’t just a tip of the cap to “Pine Barrens,” but Elliot is within some sort of simulation, acting out events to those in the Sopranos episode? Re-enacting movies is something also seen in Ready Player One. I acknowledge this is probably a huge stretch and likely not what Episode 4 (“404 Not Found”) was all about, but it’s fun to think about. Hell, in Season 2, the Mr. Robot actors found themselves in something that resembled an episode of Alf—and it actually featured Alf! So maybe it’s not that far-fetched after all.

Tyrell dies at the end of Episode 4, or at least I think he does. It ends with Tyrell being engulfed in a bright white light. If not a simulation, could that light signify an alternate reality? Or is it simply Tyrell entering the afterlife? This scene immediately made me question if we were really witnessing Tyrell’s true fate. 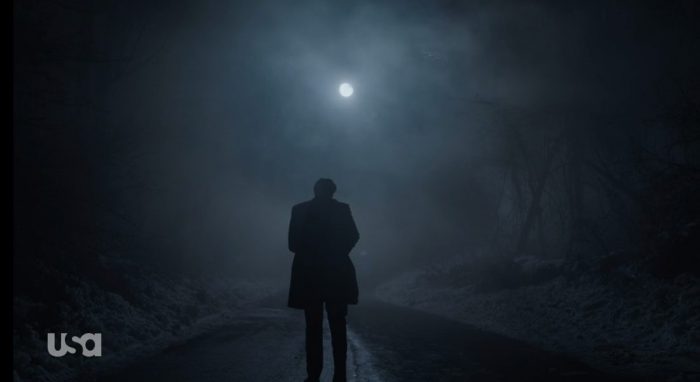 Also in Episode 4, Dom apparently falls asleep while messaging on her computer. We are shown a scene in which she invites over the messenger to have sex, but she then ends up being a Dark Army operative who attacks Dom in the bathroom.

Is this really a dream? Or is it another instance of alternate reality? In this case, I do believe we are shown a dream because we actually see Dom wake up. Also, when she opens her beer, she gets the bottle opener out of the freezer. This detail just seems like something that would happen in a weird dream. But it’s another moment from this season that gave me pause about what’s real.

In Episode 2 immediately after we gain wind of Elliot’s third persona, the episode ends with a scene involving a young Elliot and his mother. She tells him they need to wait for “the other one” before the two of them walk into a pitch-black room.

I’m not sure what was going on in this scene. At first I thought it was a flashback, but the One World Trade Center looms in the distance out the window, so a flashback is not possible. I can only guess it somehow fits in with some of these other strange moments of Season 4. I’m looking forward to seeing if we ever get answers to these seemingly disjointed details. But it’s very possible some of these scenes are never addressed again. This is Mr. Robot. I’m prepared for that.

What do you think? Are there any other moments thus far in Season 4 that had you questioning reality? Let me know in the comments.