When Yooka-Laylee and the Impossible Lair released last month, I was more than a little surprised how little notice it got. Where the original Yooka-Laylee was a loving, if sometimes too accurate, re-creation of the N64 classic Banjo-Kazooie and near-classic Banjo-Tooie, Impossible Lair is Playtonic’s attempt to revisit their Rare days designing Donkey Kong Country games for the SNES.

High-profile crowdfunded games have a bit of a bad rap these days since Mighty No. 9, the bland Mega Man homage, disappointed most (including myself) immensely. Even the original Yooka-Laylee failed to live up to many fans’ expectations. I merely found the level designs to be a bit aimless and more than a little frustrating finding those last few collectibles when they were so indiscriminately placed inside sprawling levels.

Still, I heard nothing but good things about Impossible Lair, so I decided to purchase it and treat myself to what I hoped would be a fun platformer in the vein of the DKC series. The game certainly feels like those games, but simply saying this game pays respect to them would be paying it a severe disservice.

In this adventure, you begin by encountering series villain Capital B who has captured all the bees in Queen Phoebee’s Beetalion. (I know, I know—that was a lot of “bees,” but that was the worst of it, I promise.) Your attempt to take down B fails (unless you’re some sort of platforming wizard), tossing you out of the Impossible Lair, which remains accessible throughout the entire game despite being the final stage.

That’s the part of this game that blazes its own trail. You can go to the last level at any time, but you have a very slim chance of survival since The Impossible Lair is an incredibly long, painfully difficult challenge that you will be hard-pressed to conquer with only two measly hits at your disposal. Think of it the same way you can rush straight to Ganon in Breath of the Wild. You can try it, but unless you’re a glitch-exploiting speed-runner, chances are it’s not gonna go well for you.

Oh, and there are no checkpoints. Nada.

Queen Phoebee informs you that you will need to rescue her army of bees to form a Beetalion, who will help you in the Impossible Lair. Basically, for each Bee you rescue, you are granted the ability to sustain one more hit of damage in the titular lair. With 48 bees to collect in the game, you can load up to the max, or you can see just how few Bees you need to make it to the endgame. It’s a clever twist on setting your own challenge level, and it works well.

You can retry the Impossible Lair whenever you like, and the game keeps track of your attempts. You can chart your own progress as well in regards to how many Beetalion members you think you’ll need.

When Yooka-Laylee (the current-gen homage to Rare’s Banjo-Kazooie series) came out in 2017, it was met with mixed reviews. Yes, the copyright-infringement-adjacent game gave us all the OCD collectible stuff we loved, but it also retained some not-so-beloved aspects. It hewed a little too close to the formula of Banjo at times. Camera angles still got wonky in tight spots, and jumps were sometimes unfair guessing games despite the fact we’re all trained now to watch our character’s shadow to know where we’ll land.

Impossible Lair‘s basic level structure is similar to DKC in that you play 2D platformer sections, collect quills (the game’s currency for purchasing tonics), and find hidden coins (similar to the puzzle pieces you find in the newer DKC games), while searching for paths and secrets hidden away in the corners of each level.

The difference is that the levels (or Chapters, as they are called here) are placed throughout a top-down overworld, meaning you can play levels (providing you can access them) in any order you wish.

Once I completed Chapter 1, I found myself wandering the overworld, looking for secrets or suspicious landmarks. I didn’t delve into another Chapter until half an hour later. When I did, I had a much better appreciation for what this game was trying to do. It wasn’t just trying to be a Donkey Kong Country or Rayman clone. It was trying to take that blueprint and do something more with it.

As I said before, each Bee that you rescue at the end of a chapter gets added to your Beetalion and counts as one more hit you can take in the Impossible Lair. When you rescue one, they are added to your inventory. Each one is individually named and has a short bio that I always looked forward to reading. It amused me that they put this much effort into characters who were essentially damage sponges. In a weird way, it made me not want to squander their efforts. It’s like when you find a stray animal: once you name it, you’re attached. 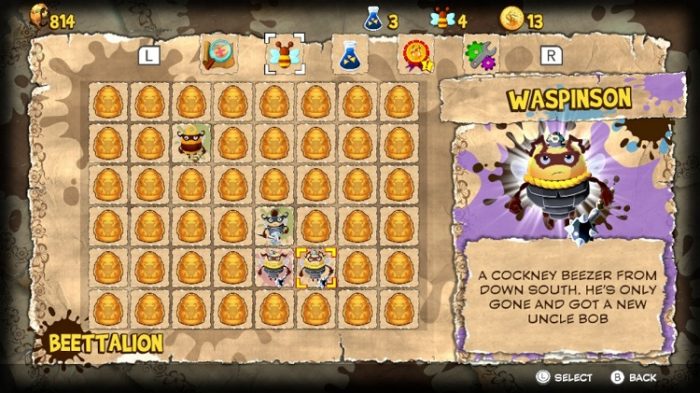 When I heard that the game would have an overworld, I questioned just how interactive it would be. Would I be subjected to relatively simple puzzles, surrounded by NPCs micromanaging my every move and making sure I never had to think for myself?

Initially, that was indeed the case, but as with most games they tend to ease you into things gently. I actually spent my first night playing the game wandering the top-down overworld extensively, only playing a few 2D levels here and there.

The overworld is massive and populated with characters from the previous adventure, meaning you encounter Vendi, Dr. Puzz, and Trowzer, the shifty snake who this time acts as a literal in-game paywall (he slithers atop giant walls that restrict your progress until you pay him with T.W.I.T. coins to take them down). The game does not have an actual paywall. I feel Playtonic would want me to stress this.

Tonics are scattered throughout the overworld and do everything from decrease the amount of checkpoints in a level to changing aesthetic things, such as rendering the game in black and white for the noir look.

Tonics occasionally come with penalties, such as reducing the number of total quills you collect at the end of a chapter, so using them requires you to consider the risk/reward of each choice.

Early on, Queen Phoebee waters plants that allow you to freeze and unfreeze levels by grabbing the frost and scorch berries with your chameleon tongue and tossing them into the Chapters. The levels you previously played can now be transformed into frozen versions of themselves. This doesn’t mean they coat a previous level with ice and call it a day. These changes affect where you can go and how enemies react, and they make each chapter a whole new experience. There are even five new coins to find in each of these new versions of a chapter.

In this way, the overworld affects the levels, whether it’s to freeze over the chapter or to subject it to heavy winds. It’s in no way a cheap tactic to make you replay levels to extend gameplay time; it’s a whole new experience, and one that must have required careful planning and attention to detail.

As a long time fan of Rare, I am fully aware that some people on the outside looking in regard these types of games as easy. Anyone that plays these types of games knows that’s simply not true. Can you run through the levels at lightning speed and mostly survive? Of course you can, but you’ll miss out on a ton of content. It’s just like your standard Super Mario side scroller. Going from left to right is a piece of cake, but you’ll miss the collectible coins, the hidden exits, and everything else that isn’t quite so easy to access.

When I play a Mario game, I want all the special coins, all the exits unlocked, and to fully complete it. I do all this knowing full well Nintendo games don’t have trophies or achievements. Heck, most of the time, 100%-ing a Mario games gets you nothing more than a pop-up telling you that you’ve done it all. It’s about the journey, and I’m looking forward to continuing mine in Queen Phoebee’s Stingdom.

Make no mistake, Donkey Kong Country 2: Diddy’s Kong Quest is still the gold standard as far as old-school, 2D, side-scrolling platformers are concerned. The Donkey Kong Country Returns and Rayman games of the current generations are also highly inventive, surprisingly difficult masterclasses in how to do these types of games. But The Impossible Lair is worthy of joining the ranks of those games, while at the same time innovating and giving players a fresh and fun experience.

I’m having so much fun playing this game that I may go back and replay the original Yooka-Laylee, which I never got around to finishing. The team at Playtonic seems to have found their groove and hopefully will continue to create games that mix old-school nostalgia with fresh new ideas, as they have proved more than up to the task of creating a challenging, visually striking game that is a joy to play.