In a film of perplexing puppetry like this, the most engrossing quality of Knives Out is character creation. Half of that strength happens on the scripted page where writer-director Rian Johnson has created a deplorable and decadent cobweb of villainy. The other half of that draw comes from the ingenuity of the assembled ensemble. This cluster of spidery characters could have been stock archetypes played by obvious actors. Instead, there’s nuance dripping like venom from thirsty fangs all over the performance stage of Johnson’s cinematic charade.

That nuance spins subversion that decidedly warps any perceived predictability one has about this silver screen species of film. Knives Out electrifies the whodunit genre with dastardly glee and self-aware perception. From piercing stares and cutting words to the ever-present stabbing threat of the forged metal weapons themselves, the blades of entertainment slash and thrust every single second of this standout romp.

Filthy rich crime author Harlan Thrombey (Christopher Plummer) lays dead in his study from a knife wound thought to be from his own hand on the night of his 85th birthday party. With the arrival of the police investigators Detective Lieutenant Elliot and Trooper Wagner (Sorry to Bother You’s Lakeith Stanfield and Rian Johnson good luck charm Noah Segan), the suspicion of murder must be disproved to rule this case a suicide. The flails of shock, grief, outrage, and, ultimately, selfishness to seek their golden parachute among the many gathered family members at the family mansion in New England ignites the game and keeps the puzzle open.

Commanding the top of the Thrombey family tree is the eldest daughter Linda Drysdale (Jamie Lee Curtis) flanked by her husband Richard (Don Johnson). They constantly chase and chastise their rebel socialite son Ransom (Chris Evans), who conveniently left the party early. Next is Linda’s younger brother Walter (Michael Shannon), Harlan’s only surviving son who has stewarded the publishing empire alongside his father while toting his snobbish wife Donna (Riki Lindhome). The final tag-along from that generational layer is Joni (Toni Collette), the widow of Harlan’s deceased son. 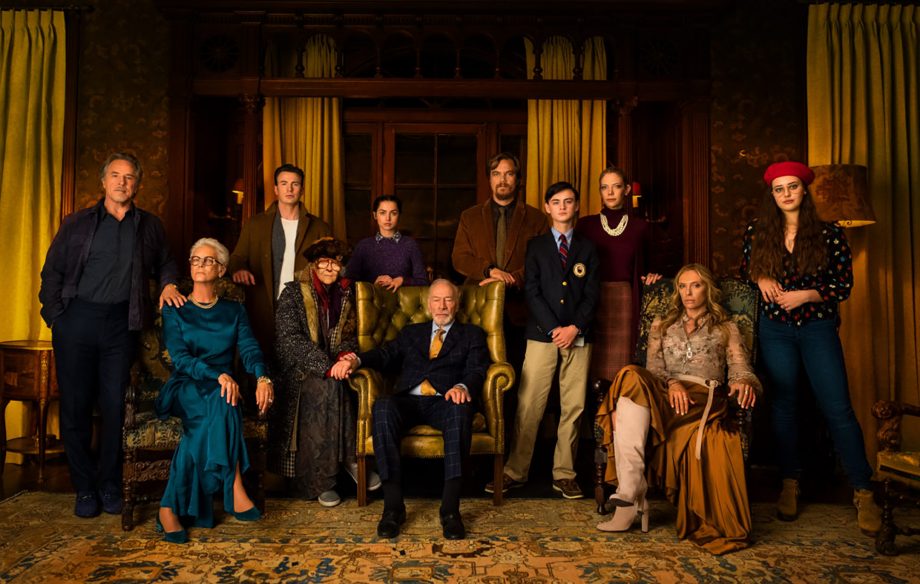 Start your shifting guesses and begin picking out the liars. These are horrible, entitled people who would eat their own young to survive, which, take it as you will, can be interpreted as biting social commentary of our times. Be it murder or suicide, the intensity of Christopher Plummer’s patriarch to have his mind made up about his future bequeathed fortunes is clear. It’s like Harlan sensed the vultures, tasted the poison, and saw this coming.

Other than Elliot and Wagner, there are two non-family outsiders observing this prideful pecking order. One is the smartest guy in the room and the other is the linchpin who could be the chief witness or the chief suspect. The top-billed Daniel Craig is the Kentucky-fried Benoit Blanc, a storied private investigator of the rich and famous who was invited to observe this case by an anonymous thick envelope of cash and the promise of a lurid story. Lastly, there is Harlan’s personal nurse Marta Cabrera, played by Blade Runner 2049’s Ana de Armas, the person arguably closest to the victim in time and proximity.

As they always say, “the devil is in the details.” With a dash of Rashomon-esque rewind storytelling, the cauldron of little cues and clues create the brilliance of the previously espoused nuance. The name card introductions of the investigation interviews grant opportunities for overt lines to be drawn out loud while the characters (and actors) blur those boundaries in flashback. Costuming and makeup add further depiction trickery. Above all, there is steep dramatic irony at work when the audience learns early on the true events of Harlan’s death ahead of Benoit Blanc. At that point, it is less about solving and more about surviving.

All it takes to stand out in this loaded ensemble is a glimmer of camera space and a trait or two that evokes a quizzical or humorous response which shakes any certainty about their true colors. Nothing about this role calls for Ana de Arma’s beauty, which is a change of pace for the rising-star when Marta’s silly personal quirk is automatic vomiting when telling a lie. Jamie Lee Curtis’s perfect white hair and designer glasses holding back coiled rage with trained composure instead of the actress’s signature flabbergast played side-by-side with Don Johnson’s cool charm failing to shield red-faced inadequacy. You’ve got Michael Shannon’s uncomfortable fidgets and improvised lines of vitriol, Toni Collette’s imitation tan and doubly fake crocodile tears, and even Riki Lindhome’s monstrous martini glass. All churn with a contempt that elevates even more when Chris Evans waltzes in much later eating cookies like an asshole with a dismissive laugh against every verbal confrontation.

All the while, there’s Daniel Craig’s “last gentleman sleuth” and “ornamental presence” carrying on like a grand host. Craig is a hoot from the moment Blanc is introduced hitting piano keys like a bullshit-detecting alarm during Elliot’s questioning sessions. Rolling with a sense of surly surprise bellowed by his over-the-top southern accent, he’s liberated from his James Bond steeliness.

Every cast member flaunts these question marks and more. The editing of action specialist Bob Ducsay (Star Wars: The Last Jedi) gives every facet a timed choreography of sorts within all the misdirection and juggling of sequences and perspectives. Even scenes of a slowdown can induce audience panting, and that is such an enjoyable wringer to feel.

Equal to the actors, Rian Johnson attacked this black comedy with artistic fury. Ambiance is everything and it all starts with the scene of the crime. Hand the Production Design Oscar out right now to the team of production designer David Crank (The Master), art director Jeremy Woodward (Live By Night), and set decorator David Schlesinger (John Wick: Chapter 3 — Parabellum). The striking balance of gaudy nooks and dark corners of this practical set is phenomenal. In his fifth collaboration with Johnson, cinematographer Steve Yedlin lurks his camera all over that house with amusing zooms that inch you closer to the danger and provocation. Composer Nathan Johnson (the director’s cousin) adds spark and intrigue with an interesting and flighty musical score.

The trope-filled mechanics of most murder mysteries create an antagonist while Knives Out has you pining for the killer instead. In flipping the rooting interests from the pursuing authorities to the identified perpetrator, the dexterous filmmaker shifted goals and bolstered energy to a different gear. Where the typical pulse rate of this kind of story opens and ends with a bang between a tedious, saggy middle, Knives Out is all about that rich center. What an equally delectable and sinful treat it is!