Mr. Robot S4E6 “406 Not Acceptable” centers around three hostage situations (and ends with a fourth). Each varies in terms of both method and goal, but it is not hard to connect each to the episode title.

In fact, the narration from Mr. Robot here itself seems to me to cross a certain line, as it veers into the realm of what we might expect from Ferris Bueller. Elliot used to talk to us and wonder, for example, if we knew things he didn’t. We figured out that twist before he did, didn’t we? That made him upset with us. But since it has shifted to Mr. Robot talking to us in Season 4, what we have gotten has been more along the lines of commentary, and has often even elaborated the theme of the episode in a way that strikes me as overly explicit. Mr. Robot has always had an unreliable narrator; are we perhaps being lulled into the sense that we are getting an objective point of view?

Last week’s heist and getaway were so impressive that some of us started to wonder if what we were seeing was real. And while S4E6 seems to confirm that it was, I can’t help but feel a sort of gnawing worry that the rug is going to be pulled out from under us. After all, this is the show that hid the fact that Elliot was in prison from us for more than half of Season 2. Perhaps I even want the rug to be yanked.

We All Have a Purpose

What Vera does to Krista is pretty much right in line with what we should have expected. He’s as menacing as ever, but fundamentally he is there for insight into Elliot’s psychology. If it weren’t for the pesky doctor/patient confidentiality, perhaps he could have been less violent about it. 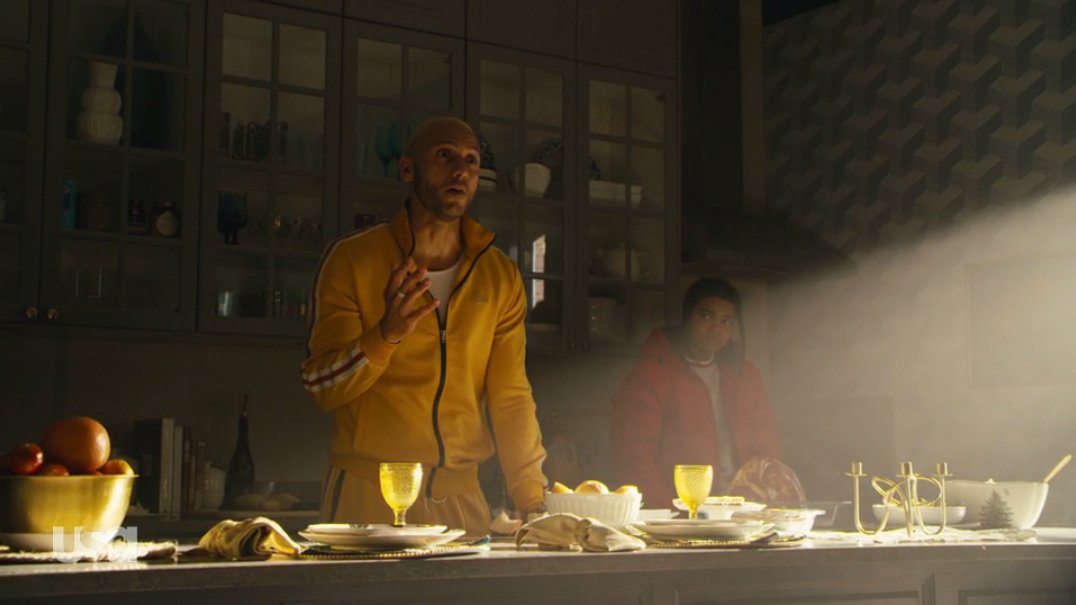 What’s fascinating about Vera is the degree to which he has insight into the human condition. Look at his story about the bully and the little bitch. It’s about power relations, and how they aren’t so much about who has greater physical strength as they are about who asserts power. And the greatest power, he learned from this story, which is almost certainly about himself, lies not in breaking someone down, but in building them up in a way that makes them depend on you.

His “metaphysics” is interesting as well, insofar as he puts forward the idea that everyone is waiting to figure out their purpose, but then turns around to assert that Krista’s purpose is to be his metaphorical baseball bat. What’s disturbing about Vera is that he seems to believe such things when he says them. He’s utterly nihilistic, and yet oddly spiritual. And remember his line: true power stems from hating yourself.

The sequence involving Dom and Darlene might be the most powerful of the episode. After all, Darlene meaningfully did put Dom in this situation, but she’s also right that Dom is not some cold-blooded killer. That said, I honestly did think she might kill Darlene there for a minute, and it’s a credit to Mr. Robot that I wasn’t feeling like Darlene was protected by plot armor.

It’s a powerful scene, as Darlene begs Dom not to kill her, and then later insists on wanting Dom to believe that there was a connection between them—Darlene was using her, but she wasn’t just using her. And it makes sense that ultimately Dom would decide that the right thing would be for Darlene to kill her. Death is the only way out, as her family remains under constant threat if she doesn’t comply with the Dark Army. Janice makes this clear in her darkly hilarious way on the phone when she says that she needs to know if Dom isn’t 100 percent so she can potentially set aside the time to kill her whole family.

Of course I wanted Darlene to shoot Janice and the Dark Army operatives when they arrived at the apartment. She had that gun in her hand, after all. But, that’s not Darlene. It’s true that she’s killed before, but she’s not some kind of action hero who can quickly make three quick shots to take them out. Plus, it’s not her personality to do so. She’s not a killer, either, fundamentally. I do wonder, though, where this is going now that she’s wiped her phone. 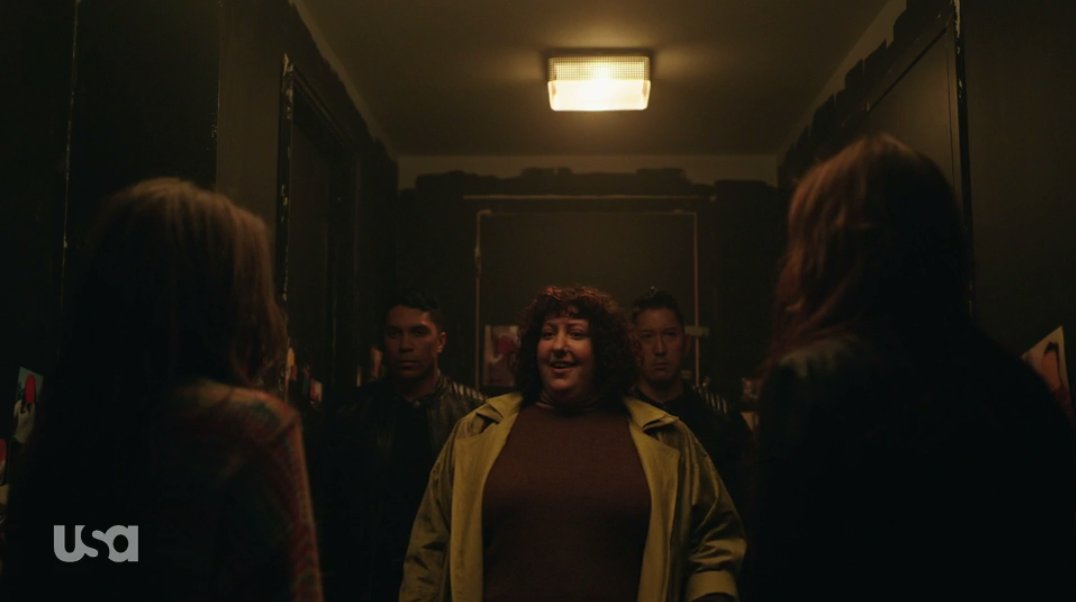 Christmas in a Cup

Our friend is not a good person. He is, as Olivia says, a monster. Even Mr. Robot seems to agree, although he implicates us, too. “None of us did a thing about it”—that’s interesting. It’s not clear what we could have done, of course, but is he suggesting he has also become impotent in the face of Elliot’s will? That is a pretty radical turnabout if you think about it. I wondered last week if the Elliot we were seeing might be “the other one” and I guess I continue to wonder if it might be throughout these events. Perhaps Vera will break him and things will become a lot clearer. Perhaps I want Vera to break him at this point?

What Elliot does to Olivia in this episode is truly reprehensible. The betrayal of trust it involves only scratches the surface. He drugged an addict. And while we might want to think that she should be able to overcome that, this would be to fail to recognize the force of addiction. It’s not that to do so would be impossible, but to feel that again opens the whole thing back up.

The logic of addiction isn’t rational. I quit smoking once, for over a year, but I never stopped thinking about it on some level. I would dream about it. And when the time came that I decided to have a cigarette again, maybe I thought I could just have one here or there socially, but I was already back in it. It doesn’t matter how much I know it’s bad for me.

And, of course, it’s worse for Olivia. She keeps a razor blade in a pill bottle to kill herself with if she ever relapses, and she told Elliot this. Thus, when she excused herself to the bathroom I saw the attempt coming, but the striking thing is that it seems that Elliot did not.

He’s so caught up in his own headspace, and so blinded by his plan to take down the Deus Group, that he fails to see what’s right in front of him. I mean, Christ, she even tells him her life is over right before she goes in there.

That he steps up and saves her does little to mitigate all of this. For all we know, she’ll kill herself later. Does Elliot care? When he met Olivia it struck me that there was something genuine about their connection, more so than I thought there was when Darlene and Dom hooked up last season. And when he tells her he is sorry, I want to believe him, even though she does not. 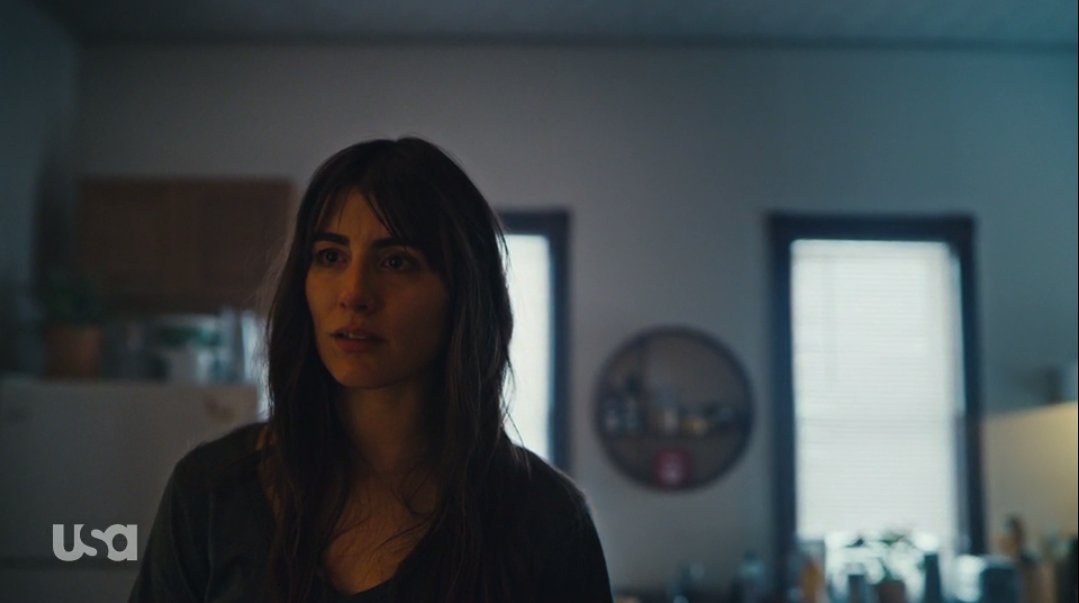 I see two possibilities here: either “the other one” (whom I hypothesized to be the man in the mask) has taken over in a way that will leave Elliot bewildered when he discovers what he has done, or Elliot has gone down the path of ideology in a way that is just as severe as it has been for Whiterose.

I’m going to presume it’s the latter for the moment at least, as the former would hang on that kind of rug-pulling moment I mentioned earlier.

If so, we’ve now seen Elliot subvert nearly everything to his goal of taking down the Deus Group. Except then for what happens with Krista at the end of the episode, when she calls him freaked out, presumably at the behest of Vera, who proceeds to kidnap him and throw him in a trunk.

Honestly, it’s easier for me to forgive a protagonist for being an asshole than it is for me to forgive them for being a dummy, and this was really dumb on Elliot’s part. He even recognizes that it is likely a trap before he gets on the subway. But, I guess he just has to help Krista? Right after he has destroyed another woman’s life in pursuit of his goal?

Elliot and Darlene’s plan seems to be in serious peril at the end of S4E6. He’s been taken by Vera, and she’s been nabbed up by the Dark Army. It’s hard to see how they will be able to do whatever exactly it is they planned to do during the Deus Group meeting.

What disappoints me the most about that is that I have consistently been sure that their plan will not work. I can’t see how it possibly could. Take all of the money away from the most powerful people in the world and…they’ll find a way to get it back.

But I suppose now I’m worried whether we’ll have a chance to see the plan fail, or if Vera has just derailed it from even being attempted.

Still no Irving this week. I hope the book is going well. But, hey, we got Leon! 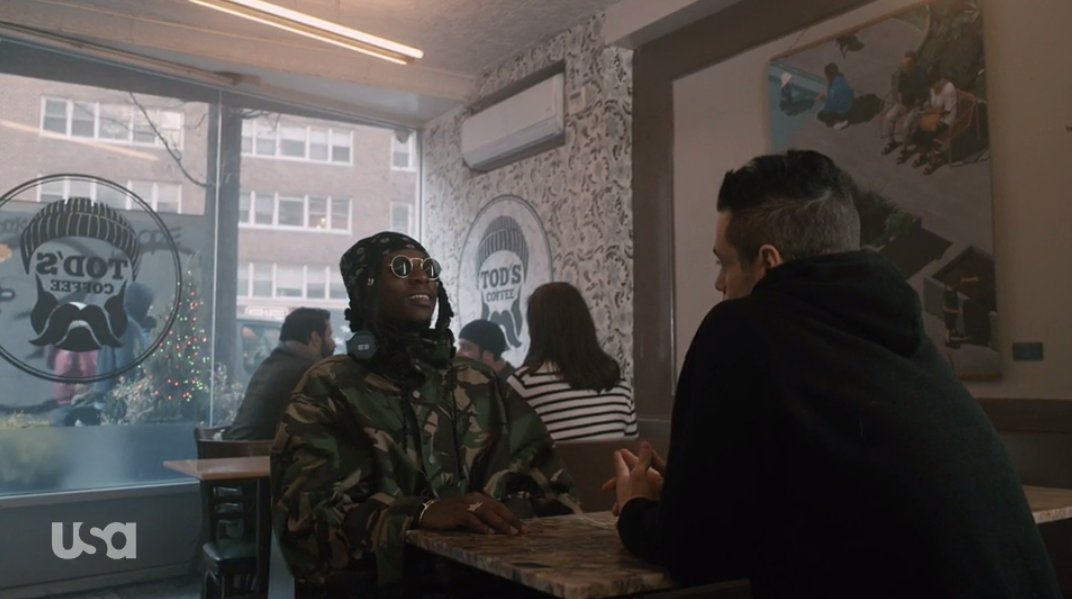 I’m curious how he has gone totally freelance, though, if he has. The Dark Army doesn’t exactly seem like the kind of organization one can just quit.

Why does the place seem familiar? Maybe because it is the same as the Ron’s Coffee in S1E1?