When you’ve got a film featuring Ian McKellen and Helen Mirren together, what could go wrong? Not much really, even if the end product is slightly predictable. Directed by Academy Award winner Bill Condon, The Good Liar is a slow-burning thriller that banks on the magnetic combination of its two leads to make up for any storytelling and tonal deficiencies.

Condon, whose career ranges from horror (Candyman: Farewell to the Flesh) to musicals (Chicago, Beauty and the Beast) to biopics (Kinsey, the excellent Gods and Monsters, also with McKellen), has a difficult time surrounding his two greatest assets with substantial drama, often shifting from dark comedy to queasy violent horror with little warning, keeping the viewer on edge. This is hardly by design however, as Condon struggles to settle on what type of film he wants to make. While Knives Out, another thriller coming in November, looks to bring the confident style points to its thrills, The Good Liar’s schizophrenic mood almost topples the whole endeavor.

But, then again, that’s why you hire McKellen and Mirren to be your leads. Their star power will power through any narrative roadblock and keep the audience engaged. Though McKellen has played villains before (most memorably as Magneto in the X-Men franchise), his performance in The Good Liar is deliciously nasty and Mirren, as his foil/victim, provides the perfect contrast. In the end, you’ll be talking more about them than anything else the film has to offer, which is both a good thing and a bad thing.

Roy Courtnay (McKellen) has not let age stop him from grift and deceit. While setting up an aging widow (Mirren) on one side of town and swindling gullible investors at strip clubs, with the help of his trusted accomplice Vincent (Downton Abbey’s Jim Carter), on the other, Roy is at the top of his game and has hundreds of thousands of dollars to show for it.

But his latest target, the widow Betty, might be his greatest mark. Living by herself after the loss of her husband three years previous, Betty is looking for steady companionship and Roy, using a bum knee and a kindly personality quickly finds his way into her million-pound-plus life. But as he begins the slow build-up to take her for all she’s got, Betty’s pesky grandson Steven (Russell Tovey) suspects Roy isn’t what he seems and begins to research his past. And when a past con job brings those he’s damaged back into his life for revenge, Roy finds himself stuck living two different lives at once, with the clock ticking on trying to grab Betty’s millions before he is either arrested or killed.

I recently saw McKellen on stage in a one-man show focusing on his acting career. The 80-year-old actor was full of life and energy, pleased to be in front of a crowd making them laugh and cry. That energy is ever-present in The Good Liar, where no one looks to be having more fun than McKellen himself. Roy is almost cartoonishly villainous and in the hands of a lesser actor would come across as near pantomime.

Mirren is given less to do as Betty only because she has to be the innocent victim to Roy. Frankly, the perfect mark is mostly a sympathetic figure and not particularly interesting. Mirren channels enough heart and wariness to make Betty three dimensional but it is mostly in service of Roy’s character development. But there really is no one better to play, well, anyone, other than Dame Helen who, at 74, is still intoxicating to look at and oozing with sex appeal, even when playing a buttoned-up woman used to being alone. This appeal is palpable in creating enough doubt in Roy that the schemes he comes up with are threatened from the start. 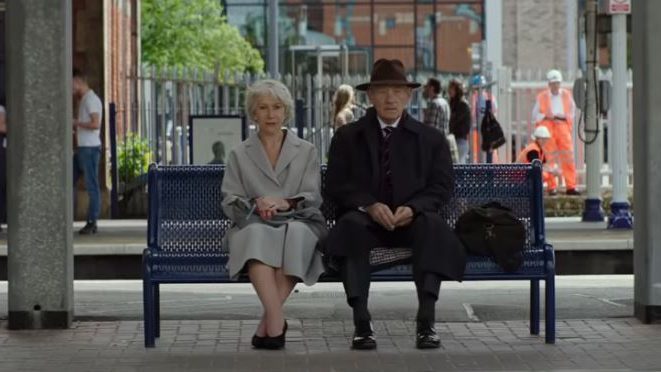 Now, as mentioned before, the acting can only prop up a film so much. Being a thriller, The Good Liar relies on multiple plot twists and reveals to make it worth the audience’s time. Without spoiling anything, there are three major twists and turns in the goings-on, and they range from baffling to confusing and, in one case, depicting years before in a popular tv show about ad executives (that’s all I’ll say in regards to that).

Not helping is Condon’s flat directing which lacks any visual punch. It has the chance to show how the comfort of domesticity can clash with the brutal lives of cutthroats and swindlers but Condon and DP Tobia A Schliessler, who had done fantastic work with gritty urban landscapes in Friday Night Lights, don’t take any risks, instead relying on the actors to be the visual treats.

The tonal shifts are constantly an issue as well. A scene of shocking ultra-violence follows a scene of playful mischievousness. If you’ve seen any of the commercials for the film, you know someone doesn’t mind the gap in the London Underground and pays dearly for it. I think some of the audience for this film, likely an elder crowd, might be a bit surprised by eye gore and appendage mutilation.

And though I haven’t mentioned any spoilers, I didn’t really have to. If you’ve seen any of the marketing for the film, it might have already done it for you. I can say that the viewing experience does suffer if you’ve watched the trailer and kills a lot of narrative momentum. However, if you are lucky enough to get a good crowd, as I was at a sneak peek screening with the public, a fun time can still be had.

So while The Good Liar isn’t the most engaging thriller, it certainly is a well-acted one featuring two of the world’s best living actors. It is for that fact—and maybe that fact alone—that The Good Liar should be your next stop at the cinema.

The Good Liar opens in the US nationwide on November 15th.

All images courtesy of New Line Cinema and Bron Studios.