“Okay, so we’re four episodes in, and despite having promoted the heck out of Lin-Manuel Miranda as one of our leads, we have yet to see him, so let’s make sure we give him one of the best hero entrances ever, plus an outfit that everyone is going to want to cosplay, and what the hell, since everyone associates him with musicals anyway, let’s let him sing too.”

That’s how I imagine the conversation went. And you know what? It worked. Not going to lie, Miranda as Lee Scoresby had been one of the things that had made me keen to watch the series in the first place, and I was getting a bit impatient for his arrival. I’m happy to say that I wasn’t disappointed, though he’s certainly not what one would have expected.

One of the things that gives Miranda that universal appeal that he has—that feeling that he’s totally that best friend you just haven’t met yet—is the obvious joy he takes in everything he does. Dana Schwartz tweeted a while back: “Find someone who looks at you the way Lin-Manuel Miranda looks at literally everyone”. It’s true, and it’s that exuberance that shines through and makes everything he does work, no matter how unlikely it might have seemed at first.

Would he have been an obvious choice to play the Texan aeronaut, previously played by one of the manliest man’s men that ever manned (Sam Elliott)? Doubtful. But to this day, I still imagine how someone’s first suggestion to cast Mandy Patinkin as Inigo Montoya in The Princess Bride must have gone over, and despite the incredulous initial response that must have gotten, it’s hard to imagine anyone else in the role. I expect that Miranda’s Scoresby is going to be the same way.

Miranda himself told Entertainment Weekly that he wouldn’t be the first person to cast himself in the role, and that to have used Sam Elliott’s performance as any sort of a reference would have been the road to ruin. In Miranda’s hands, Lee Scoresby is a bit Harold Hill, a bit Captain Jack Sparrow, and a bit Donald Shimoda, with a healthy helping of Han Solo thrown in. In between harmonizing with his hare daemon and rattling off expository dialogue, he bops around the deck of his airship like he’s got his own TARDIS. It’s wonderful. He’s got the same goal that Lyra has—to track down and enlist the aid of an armoured bear.

This episode, titled simply “Armour”, is your basic “assembling the D&D party before the quest” formula. Scoresby makes his oh-so-grand entrance (scruffy-hot Lin is still weirding me out a little, since I’m so used to him being varying shades of cuddly, but I love it) even before we meet back up with Lyra and company. Everyone’s gone North, and everyone’s looking for Iorek Byrnison, the armoured bear who’s lost his armour. It was nicked from him and was hidden away by the Magisterium, and the town of Trollesund wants to keep it that way, because they like having him under their thumb. Armoured bears, or Panserbjorn, are as sentient as humans, but instead of having daemons, they have their armour. Without it, Iorek doesn’t want to do much beyond brood resentfully around the town that is keeping his armour from him.

Lyra, having spent the past three episodes talking about the North, now gets the depressingly-adult realization that life isn’t always about getting what you want. “My whole life I’ve wanted to be here, and now that I’m here, I’m not so sure I want to be.” We’re beginning to see her character blossom a bit more, and Lyra Silvertongue (the nickname she is about to get) is starting to poke her head out. She may have spent the past three episodes complaining about people not being straight with her, but it seems like now she’s a fan of the half-truth. Lee Scoresby is a con man, but Lyra is the one who cons him into hiring himself out to the Gyptians to aid them on their quest.

She’s also getting better at using the alethiometer, and we get further explanation from her on how the thing works. This show is still noticeably telling with its information as opposed to showing, and I do wish they would stop that. Not only does that fail to take advantage of the medium of film, but overall, this series has been better filmed than it has been written. I’m still finding the dialogue a bit clunky and awkward, but everything is so beautifully filmed that the minute after a poorly-written line annoys me, I find myself forgiving it a minute later.

By the way, even if this series fails to receive any critical acclaim for anything else, I hope that it wins many awards for music, and that it skyrockets Lorne Balfe’s career as a composer. Even if I hated everything else (which I don’t), I would probably keep watching for the score alone. It’s that good, and I want it to be released for download so that I can play it all the time and turn my most mundane activities into adventures. With this music on, folding my laundry will become epic and glorious.

The lion’s share (bear’s share?) of the plot of this episode is bear-related. Lee walks into his very own Western when he hits up a local bar to get some information and pick some pockets. He even gets into a bar brawl, doing quite well for a while against four guys. His daemon offers suggestions and commentary from the sidelines, and that was almost fun enough to distract me from how badly the fight was shot. I know a lot of people don’t care about these things, but I do—it makes me crazy when a fight scene is shot too close and fast, and you can’t see anything. C’mon, guys, I want to see the punching!

I admit that so far, I’m not crazy about Joe Tandberg as Iorek Byrnison’s voice. Not that he isn’t a good actor, but the voice feels like it doesn’t fit. He sounds like a young, handsome guy who is affecting a voice—because he is. Maybe it will grow on me. Lyra uses the alethiometer to locate Iorek’s armour, and then she and Lee talk the bear out of a rampage that would have started with Magisterium officer Sysselman. If he looks familiar to you, that’s because he’s Dudley Dursley, all grown up. Harry Melling can now tell his grandkids stories about the time a CGI bear stood on his face for an uncomfortably long time.

There’s also witches now, apparently. Farder Coram tells a whole story (again, a story that is told, when it could have been shown) about his ex-girlfriend Serafina Pekkala. We don’t get to meet her yet, but we meet her daemon, and thus learn that witches’ daemons can do the long-range thing too. This poses further questions about Mrs. Coulter, who can send her daemon away from her. Does that make her a witch? We’ve seen her do magic, after all. She also makes her own trip to see a bear.

Iofur Raknison is the current king of the armoured bears, and for all his power, his problem is that he wishes he were human. He dresses in clothes, drinks liquor, and yearns for his own daemon. This makes him gullible, unlike the rest of his kind. When Mrs. Coulter goes to see him and asks for his aid, the payment she offers is human and religious—she offers to have him baptized into the Magisterium. Just in case we hadn’t yet caught on that we were dealing with a church metaphor here.

I’m liking this series, truly, but it’s the kind of liking that is a choice, you know what I mean? I want to like it, so I’m choosing to. And there’s certainly enough there to like. I’m just not being blown away the way I thought I would be. But hey, the party is assembled, we’ve got Lin and we’ve got bears, and we’ve still got some time. Show me something.

More From: His Dark Materials 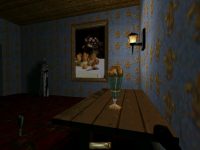