Look, when I saw this movie in 1994 about Arnold Schwarzenegger being pregnant, I went in expecting one big parade of ridiculousness. And I did get it, but I also got a lot more than I bargained for, and I’m pretty sure that was the whole point.

It’s a simple premise. Man takes miracle fertility drug, man gets pregnant. And, when the man in question is the poster child for alpha-man-male-testosterone-butchness, Arnold Schwarzenegger, there’s your recipe for comedy right there. Add Danny DeVito for the buddy factor, Emma Thompson for the love interest, a dash of Frank Langella to be the bad guy, set to Ivan Reitman, and stir. Sure, it’s silly. But it’s also sweet, and, dare I say it? It’s kind of smart too. 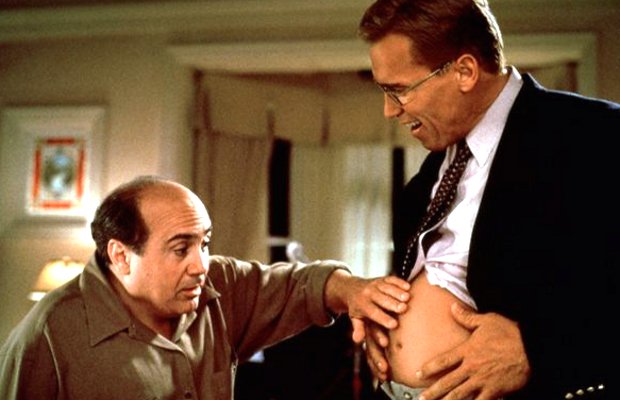 Arnold (yes, I’m assuming he and I are on a first-name basis for the purpose of this article because his surname takes half an hour to type) plays Dr. Alex Hesse, a research specialist in fertility. He and his partner Larry Arbogast (DeVito) have invented a new wonder drug called Expectane, and they’re pretty sure that it can get anyone or anything pregnant. Alex is the quiet one of the pair, more of a lab rat than the pitchman that Larry is. At the top of the film, they make their presentation to the FDA to try and get Expectane approved for clinical trials in humans (it has already worked successfully on chimps), and the FDA says no. As a result, the university that funds and houses their research gives them the boot, replacing them with a more successful scientist. Alex is all ready to bail, to head back to Europe to start his career over again, but Larry has other ideas.

It bears mentioning that despite his profession, Dr Hesse has a bit of baby anxiety. The film opens with him having what turns out to be a dream in which he is surrounded by babies, and absolutely at a loss for what to do when one pees on him. Not going to lie, it’s kind of refreshing to see Mister Capable completely stymied by tiny humans. When he wakes up, he shakes off the dream and sets to doing stomach crunches before he even gets out of bed—also refreshing to see Arnold’s buff-ness not simply taken as a given. It’s nice to see him as a normal human who actually works at it to look the way he does. Plus, he’s built down for this one, so even though his biceps are still the size of my head, you could still buy him as someone who isn’t a professional ass-kicker. He’s got cute little glasses and everything.

So anyway, there’s some Canadian company who loves the idea of Expectane, and knows how to work around the FDA if only our boys can figure out how to do a human test of it. Since no pregnant woman is likely to be a guinea pig for an untested drug, and since apparently this has already been successfully tried on Moe the male chimp, Alex reluctantly agrees to test the Expectane on himself. The plan is to get an egg from somewhere, do the in vitro thing, and implant it in Alex’s abdomen. They figure it will last for a trimester, they’ll get their data, and then he can simply stop taking the drug and the embryo will gradually go piff. 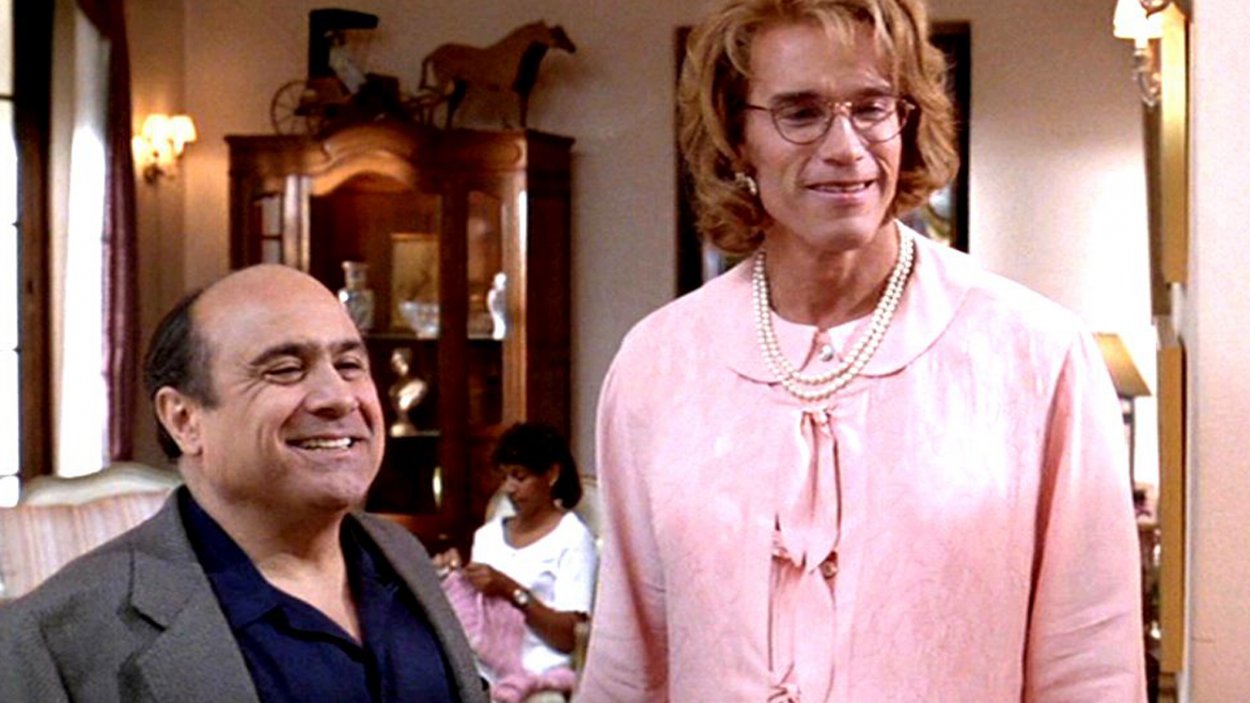 It turns out they don’t have to look very far for a donor egg. When they got booted from the lab by the head of the university (Frank Langella, who still manages to be sinister in a bow tie), they were replaced by Dr. Diana Reddin (Thompson), whose whole thing is cryogenic freezing of human eggs. Convenient, right? Larry nicks an egg from Diana, not knowing that the egg labeled “Junior” is her own egg, that she’s saving for a rainy day. It was a glorious choice that they decided to make Diana Reddin an absolute klutz, constantly tripping over things and bumping into people. Lest we forget, Emma Thompson got her start in comedy, and she’s bloody good at it. I remember seeing her in an episode of The Young Ones back in 80-something.

And of course, in addition to funny, she’s brilliant (at one point, she makes a comment about past lives, and considering how soon this came out after Dead Again, I couldn’t help but giggle). When Alex is kvetching about what she doesn’t know is morning sickness, she says “Men…they’re pathetic when it comes to pain. You should try being a woman some time. It’s a nightmare. Your body goes peculiar with your first period and doesn’t stop until menopause. It’s a lifetime of leaking and swelling and spotting and smears, crippling cramps, raging hormones, yeasts, and that’s if everything’s normal.” You kind of want to stand up and cheer. They also make the neat choice of dressing her in pants and vests all the way through, looking quite traditionally masculine.

They do the thing, Arnold gets pregnant, and once again, we get to be amused at Mister Kickass being bowled over by morning sickness, to say nothing of his ever-expanding belly. There’s another baby anxiety dream sequence, and let me tell you, a baby with Arnold’s face CGI’d onto it is total nightmare fuel. It’s kind of interesting, revisiting this movie after having been pregnant myself. Now, I find myself thinking, “Um, being pregnant may make you emotional, but you don’t automatically find yourself doing stereotypical girl things”. Back in the day, I would watch it when I was feeling hormonal, and I would think “Arnold understands me!” Admittedly, when I was pregnant, I was more like klutzy Emma than Arnold.

One of the absolute best moments in the film comes when, after figuring out what is going on, Frank Langella comes in to try and take custody of Alex and his unborn baby. Alex, in a fabulous moment of reminding us that he is still Arnold goddamn Schwarzenegger, throws Langella across the room and says, “My body, my choice.” Of course, this is immediately followed by Alex running away at a brisk waddle, holding his distended belly as he goes. 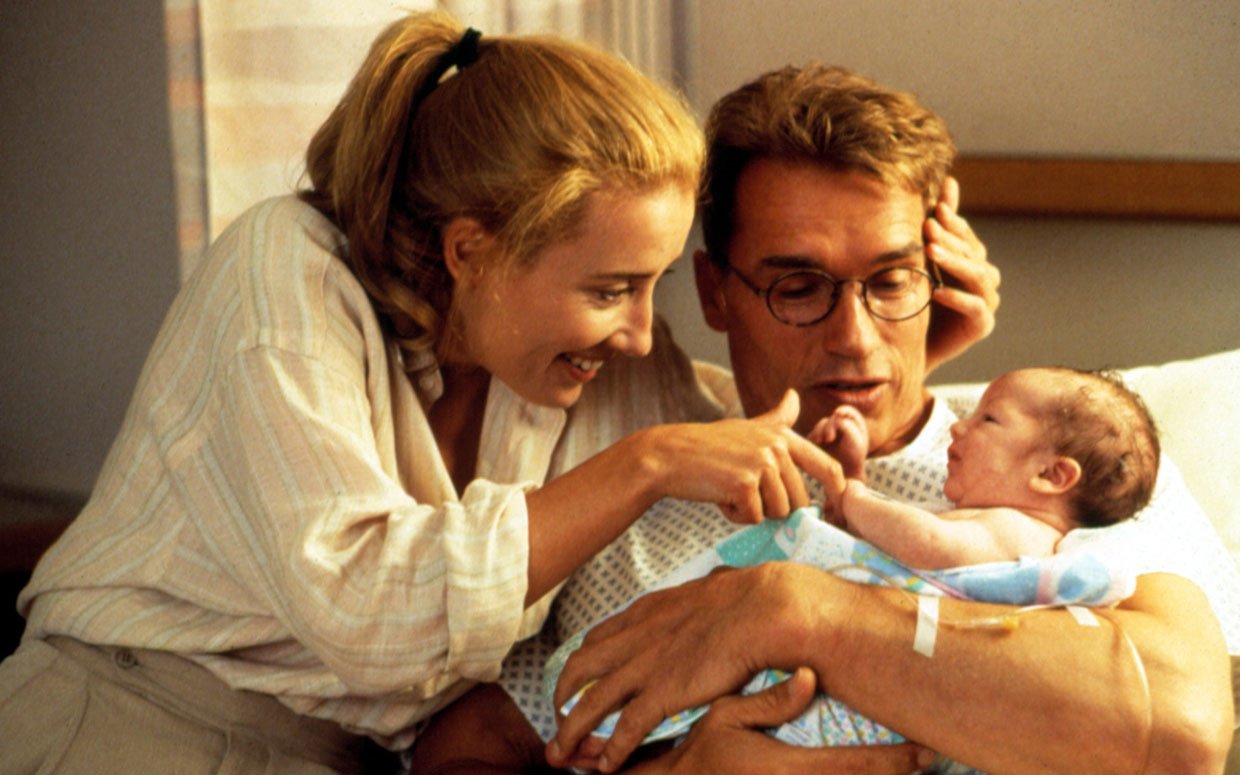 There’s this whole subplot with Larry’s ex-wife Angela (Pamela Reed), who tried to get pregnant the whole time they were together and never managed, but after a one-night stand with Aerosmith’s personal trainer (I always wonder if they had to ask the band before they showed scenes of DeVito throwing darts into their faces on a poster), she’s knocked up too. And strangely, she wants Larry to be her doctor. Why anyone would want their ex to be their obstetrician is beyond me, but naturally it leads to a reconciliation and it’s very sweet. Besides, in classic Pamela Reed fashion, she’s the one who screams for drugs while in the throes of labour, and boy do I relate.

It would have been easy to make a film like this hardcore feminist, or to go in the other direction and make light of the whole concept of pregnancy. But I find that it really kind of hits both sides of the male/female angle on the thing. On the one hand, when she finds out what they’ve done, Diana reads Alex the riot act, including “You think men don’t hold enough cards, you have to take this away from us as well?” But then later, when Alex relays this conversation to Larry, Larry has this to say—“I can’t tell you how many times I’ve heard pregnant women complain, I just wish a man could go through this. You finally do it, and what do you get? Attitude and insults.”

And they leave it to singer Judy Collins (perfectly cast as the patroness of the posh retreat for pregnant women where they hide Alex for the last few weeks of his pregnancy) to deliver what I think is the real message of the movie beyond the comedy—“I think we have to dispense with the myth that some are born with the maternal instinct and others are not. The little girl tending her doll collection is no more a natural-born mother than the tomboy down the street.”

There’s a happy ending, of course, and lots of baby cuteness, to say nothing of a baby chimp they toss in for extra cuteness value. Junior is welcomed into the world by her glowing parents (all three of them—mom, dad, and Larry, the guy who technically knocked dad up), with no idea of the excruciating name she’s going to have to grow up with. Emma Thompson is so good that she can make the moment with the baby absolutely real. I don’t care that this is a doofy comedy, I am Emma Thompson and you will cry if I want you to cry! Oh, and in a surprise before-they-got-famous cameo, Anna Gunn (Breaking Bad, Deadwood) gets a few seconds of screen time as an under-five.

So Junior has lots to recommend it, in my opinion. Given the current trend of turning doofy comedies into Broadway musicals, I think this film would be a terrific candidate. Give it a watch sometime. You’ll find it funny, you’ll find it sweet, and it might even surprise you. Like me, you might find it smart, and dare I say, relevant.