If you’re anything like me, and I know I am, you’ve occasionally stopped to look at your body in the mirror and wondered what on Earth it is you’re looking at. For all the science and research that has gone into investigating the human body, it remains a strange, mysterious, and sometimes terrifying machine. When you break it down, we are essentially little lumps of flesh and muscle, encased in bone, operating an entire skeletal structure through a highly sophisticated web of circuitry connecting the brain to all of our various parts and pieces. And that’s the simplified version, not even touching on the elaborate mess of organs inside that keep the whole operation running. If any element of this process were to become compromised, it could elicit a chain reaction to all other aspects of the operation, which if left untreated could result in either partial or total failure of the overall construct.

It’s from this central anxiety over what’s happening inside us that we get body horror, one of the most disturbing and visceral subgenres out there. Not for the faint of heart, these films dig into what happens when the human body is either corrupted or altered in what would appear to be highly unnatural ways. The fear comes from the notion that while the specifics of a given plot may be allegorical, the core truths about the ways our bodies can be taken over and manipulated by internal or external forces feels all too real.

How We Define Body Horror

But in the later examples, the manipulation of the body is generally brought on by more obviously external agents (such as a killer hacking at you with a machete in Friday the 13th, or your body being forced into a machine that will tear it apart, à la Saw). Body horror tends to focus on agents that interrupt the body’s internal processes, whether that comes from bonding with a virus, an alien invader, or some form of technology. Sometimes it’ll even be a metaphor for a more psychological interpretation of what’s happening with the body.

That’s why I wouldn’t consider Hostel to fit into this subgenre as much as say, Dead Ringers, which features considerably less on-screen violence but digs into the mental ramifications of identical twins growing increasingly unhinged as their previously synchronized lifestyles begin to diverge, thus calling into question where one body ends and the other begins.

Where Do We Begin

Speaking of David Cronenberg, perhaps his films are the best place to start when exploring the origins of body horror, since he is widely considered to have explored it as thoroughly as any filmmaker might dare. Though his later work has veered more towards the psychological, the first stretch of his filmography is defined by all manner of bodily contortions and infestations. The Canadian auteur shows a fascination with disease and the ways it can affect a person both physically and mentally, as well as how such things can upset the established social order for good or ill.

One of his earliest films, Shivers, dealt specifically with genetically engineered parasites, and what happens when they get loose in an apartment complex, turning all who come into contact with them into sex-crazed zombies who naturally pass them along through further fornication. Starting as we mean to go on, he then directed Rabid, which focuses on a woman developing a taste for human blood following experimental surgery that seems to save her from a nasty motorcycle accident, even as it imbues her with an equally nasty mutation that pokes out of her armpit to feed on her less-than-fortunate victims, who are usually hooked in by what appears to be a mere sexual encounter. The imagery and the method of viral transition in both films draw clear parallels to the spread of STDs, blending the act of sexual pleasure with the destruction of the body and the decay of society.

And he wouldn’t stop there. The Brood would take this a step further by passing the rage of a mother onto her terrifying mutant children, again via some experimental therapy. Crash (no, not that one) features a cast of misfits who are only able to feel sexually awakened in proximity to car crashes. eXistenZ depicts the communal act of disappearing into a video game world as something deeply intimate via literally taking the console (which itself looks eerily organic and requires stimulation to operate) and plugging it into a newly created bodily orifice. But his masterpieces of body horror would end up spawning from two very different directions.

First, we have The Fly, which at the time was seen as an allegory for the AIDS epidemic but could just as easily stand in for any disease which ravages the body into something unrecognizable. As poor Jeff Goldblum (again through the use of experimental technology) finds his cellular structure fusing with that of a housefly, he slowly takes on the more alien characteristics of his insectoid counterpart and losing those that would make him more definably human.

This one is especially heartbreaking because it’s viewed through the prism of his relationship with Geena Davis’s character, and the helplessness she feels watching the man she loves devolve into something she no longer recognizes. Anyone who has ever been forced to watch a loved one be slowly eaten away by any given illness will recognize the inherent tragedy of their situation, lending the story an emotional heft that elevates it from being a mere thought exercise.

Second, we have Videodrome, which explores the ways that we are influenced by the media we consume, albeit in a far more physical manner. As James Woods’s television producer becomes obsessed with an underground program depicting what appears to be actual torture, mutilation, and even murder, he finds his mind being gradually reprogrammed by the content, a concept made more literal when a pulsating VHS is inserted into a new hole in his body that can only be described as a “stomach vagina”.

Although Videodrome primarily depicts the dangers of such media influence as it shows Woods being manipulated into acts of horrific violence to fulfill the agendas of those behind the programming, it does also hint at the idea of what it calls “the new flesh”, a new stage in humanity’s evolution where the communal consumption of shared media will eventually overtake our mere physical forms as a new form of reality and thus, a higher plane of being. 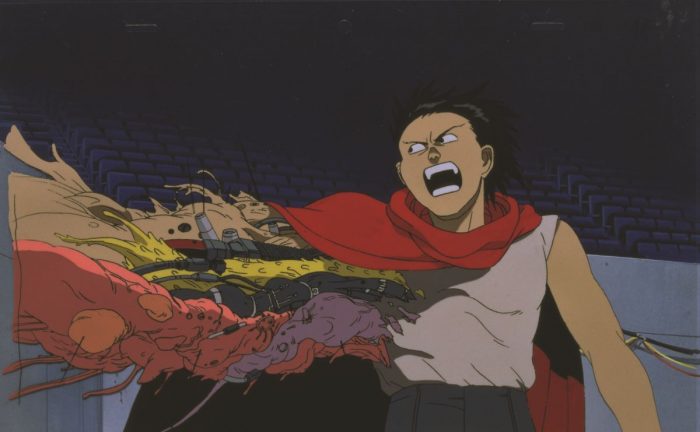 Cronenberg is of course not the only director to explore these themes in depth. Body horror is especially prevalent in Japanese cinema. In the same way that Godzilla is a direct response to the bombing of Hiroshima and Nagasaki, the definitive imprint of those attacks and the way they’ve impacted Japanese society and technology can be felt in a number of films.

One of the most prominent examples is in Katsuhiro Ôtomo’s landmark anime Akira, in which the character Tetsuo develops psychic powers that seems to represent the next stage in human evolution. Lacking the finesse to use his newfound abilities in moderation, and filled with unbridled rage at a world that seemingly seeks to oppress him, he goes on a rampage, destroying large swaths of the city (one that was already recovering from an atomic-style blast left by his psychic predecessor, the titular Akira).

When his arm is destroyed in battle, he replaces it with a metallic version constructed from debris, though the excessive use of his powers ultimately triggers a horrific transformation that blends his expanding flesh with the machinery, until he has become an enormous hulking mass that eventually implodes in on itself. The film ultimately paints this in a cautiously optimistic light, suggesting that his painful evolution resulted in him passing on to a higher plane of consciousness and (literally) outgrowing his physical form, which puts it in a similar vein as Videodrome.

Exploring these same lines is the less well-known but equally fascinating Tetsuo: The Iron Man (the name is a coincidence as far as I can tell). In this microbudget indie from Shin’ya Tsukamoto, a man’s chance encounter with a metal fetishist results in him being infected with machinery that gradually takes over his entire body, and eventually fuses him with the fetishist in question.

It also results in him developing what can only be described as a “drill dick”, because we’re in for a penny, in for a pound when it comes to the sexual imagery in these films. But as with both Akira and Videodrome, the visually terrifying creation at the end of the day is presented as something that might go on to infect the rest of humanity, possibly fusing us with the ever-present technology that has increasingly come to define our everyday lives, and indeed blurring the lines between our bodies and such machines. 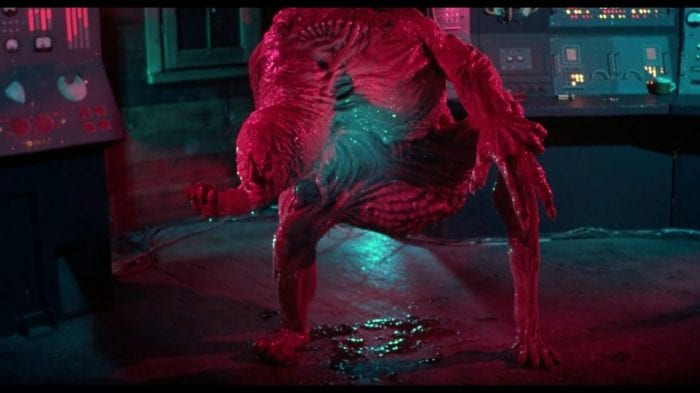 Depending on what kind of person you are, you’re either intrigued by some of the films and ideas I’ve shared here, or you’ve been repulsed and possibly stopped reading a while ago. Maybe you fall somewhere in between. Any reaction is totally valid. Body horror is most certainly not for everyone. For me at least, the reason I get so much out of them is a combination of the visceral terror at watching the human body contort itself into unthinkable shapes, as well as the psychological ramifications of what such manipulations might represent.

It’s worth mentioning that for special effects aficionados, the subgenre represents some of the most inventive uses of practical makeup, puppetry, and animatronics in the history of cinema (I would be remiss if I didn’t at least mention John Carpenter’s seminal classic The Thing, which may very well be the gold standard in this department). If you’ve got the stomach for it, and want to see something truly out-there, you’ll find a treasure trove of visual strangeness just waiting to be discovered. From Society and Invasion of the Body Snatchers, to Tokyo Gore Police and the works of Stuart Gordon, there’s something for everyone. Want to see a woman give birth to a middle-aged man? There are at least two films off the top of my head that feature such an occurrence (Xtro and Gozu, respectively). All that imagery, and numerous thought-provoking ideas about the nature of humanity to go along with it? Is there any other subgenre that can make such a claim?

Just don’t eat while watching them.

Myles Hughes is a writer, actor, and independent filmmaker. A lifelong cinephile and a self-proclaimed dork, his fiery passion for movies and things that go bump in the night knows no bounds. He currently resides in Florida, but don't hold that against him.