Welcome to What’s the Buzz, 25YL’s feature where members of our staff provide you with recommendations on a weekly basis. In our internet age, there is so much out there to think about watching, reading, listening to, etc., that it can be hard to separate the wheat from the chaff, filter out the noise, or find those diamonds in the rough. But have no fear! We’re here to help you do that thing I just described with three different metaphors. Each week a rotating cast of writers will offer their recommendations based on things they have discovered. They won’t always be new to the world, but they’ll be new to us, or we hope new to you. This week, Hawk Ripjaw revisits Mighty Ducks: The Animated Series, Caemeron Crain is listening to Trent Reznor and Atticus Ross’s cover of “Life on Mars?” and John Bernardy recommends We Do: A Watchmen Podcast.

Hawk: I stayed up late on the eve of Disney+ and immediately signed up for it because I am a filthy consumer. When I actually started exploring what was on the app, I dipped my toes in a little bit of Winnie the Pooh here and a little bit of The Great Mouse Detective there. And then I saw it. Mighty Ducks: The Animated Series is on Disney+. I was all about this show when I was a kid, and I’m still not sure if that was ironic or not. One thing I am sure of is that this show is still dope as hell.

This animated series is based on the original sports drama from a couple of years prior. It started with the very grounded ’90s sports drama, and then someone at Disney said, “Yeah, BUT. What if they were aliens who are also ducks from another planet called Puckworld, and they have guns that shoot pucks and they constantly save the world from an evil dragon voiced by Tim Curry who every episode has some kind of interdimensional weapon that threatens the world, AND OH YEAH these alien ducks are also a pro hockey team and they have an x-ray hockey mask.”

The dialogue for the episodes is frequently inventively dumb, cramming in awful groaners of jokes as often as possible and using probably every bird-themed pun in existence. It’s a lot of fun, both for how over-the-top it is and the blast of nostalgia from ’90s Disney cartoon shows. There is such a thing as too much of it, and I wasn’t able to binge more than a few episodes of a time, but it’s definitely worth going back to in any capacity. 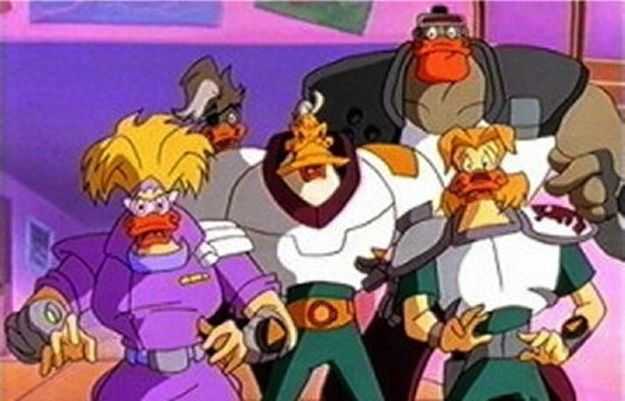 Caemeron: Though I’ve been a Nine Inch Nails fan for at least 25 years, I’m still surprised by how much I enjoy Trent Reznor and Atticus Ross’s soundtrack work. The music has a way of being both reminiscent of NIN and different. Perhaps Ghosts (which I love immensely) is the closest thing that Nine Inch Nails has on offer. Regardless, Ross and Reznor’s score is the biggest reason I am sad that the American version of The Girl With The Dragon Tattoo stalled out after just one film. And to be clear, I’m saying that their music was more important to my enjoyment of that film than David Fincher’s direction, though they are of a piece.

This continues to be the case with the music they have provided for HBO’s Watchmen—not that the music is my primary source of enjoyment, but that it fits perfectly with the tone of the show as a whole. And then, this past week, we were treated to a rendition of David Bowie’s “Life on Mars?” as the credits rolled.

It was a perfect ending to an episode that culminated in a twist that had to be relatively shocking even to those who predicted it. But my recommendation isn’t about the show (though you really should watch it!), but about the song that inspires an almost religious awe.

Trent Reznor and Atticus Ross provide a cover of Bowie’s song that is both minimalist and beautiful. Unlike the original, which comes to an orgiastic climax before repeating itself and ending with a denouement, the song is here presented primarily through quiet piano that is ultimately overtaken by swelling chords such that it only climaxes once, leaving no room to breathe afterwards.

I’m not suggesting it is better than Bowie—that would be blasphemous—but it’s hard for a cover of a song this iconic to justify its existence, and this version does so and more. Though there are no vocals (with the melody instead being tracked on that quiet piano), one can’t help but hear Bowie’s lyrics in some subtle way in one’s head. This may be the most brilliant move that Reznor and Ross made. Whereas with other instrumental covers one might not think much about what was said in the original song, here Bowie’s voice feels present through its absence. If nothing else—even if you don’t know any other lyrics—“is there life on Mars?” can’t help but ring through your head as you listen to the song.

On the one hand, again, this is absolutely perfect as the closing music for this particular episode of Watchmen. But it also hits me in the Bowie-shaped hole in my heart as a reminder of his absence. This was maybe the only death of a celebrity that has ever made me cry, because Bowie was so much more than that—not just a great musician, but an icon that opened up possibilities of how one could be in the world.

So do yourself a favor and, whether you’re watching Watchmen or not, take three minutes to listen. There are no spoilers here, just beautiful music.

We Do: A Watchmen Podcast

John: There are a boatload of Watchmen podcasts, all bearing similar looks and names, and to cut through some of the confusion, I’ll be reviewing one of them every week of Watchmen’s run on HBO. Who knows, maybe you’ll meet your new favorite podcast along the way.

This week I’m looking into We Do: A Watchmen Podcast, from Bald Move. The two hosts put out an instant takes episode right after the episode airs, and then come back on Wednesdays with a two-hour-long deep dive into the latest Watchmen episode. Usually one of the hosts is a little soured in the initial take but then comes around once the episode’s contents are absorbed more, but this week they were less inclined to tolerate all the weirdness in the show. They suppose it’s because there are only two episodes left to tie up everything and they’re not sure how well that can be done. The hosts were also not fans of five minutes of exposition at a time, nor how their enjoyment was hampered from all the spoilers found on Reddit (or even Peteypedia). But, they treat this episode as fairly as they can and do plenty of worthy deep diving as they go.

The hosts have a discussion around how culture shapes media and media shapes culture, and how Vietnam and Tulsa thematically connect through genetic trauma. They found it interesting that Angela would lie about what she saw, and they discuss the relevancy of elephants. The show seems to be interested in manufacturing connections between unrelated things and wanting us to think Looking Glass has gone undercover in the 7K. The hosts wonder if we’re coming up on a real-time episode, and later they discuss the inherent worth of duplications.

They think Veidt’s trial is a complete farce, and then debate if his tears are genuine while exploring the reasons for his crying. Then they explore more questions: is Doctor Manhattan Veidt’s jailer or not? Is Lady Trieu playing both sides, and does she believe her words or is she already on the path to being a villain? Does Lady Trieu want to intercept Manhattan after the 7K captures him? How does the 7K know who Manhattan is?

After these questions are explored, they look into what the Millennium Clock will do, as well as debate whether Trieu is trying to save or trap Manhattan. Then they look into the Vietnamese medical report and origin of Sister Night from this week’s new Peteypedia entries. And the last 18 minutes go into an audience feedback section.

I like that this show remains critical rather than overly fanboying about brilliance, yet they still find a ton of value in the show despite their trepidation. Their theories are interesting, and they try to focus on the positive rather than negative elements. It’s fun to hear a skeptical perspective on the material while still giving the material the benefit of the doubt. And I’ll definitely be curious where their opinions end up in two weeks when Watchmen wraps up.

Jim and A.Ron are watching the Watchmen. The Millennium Clock continues to count down as we experience a lot of big reveals in this episode. Jim isn’t feeling it as much as A.Ron – but that’s, like, his opinion man. They discuss the Peteypedia, and also entertain some feedback.