Dracula—the name alone conjures visions of caped actors lurking in the shadows, waiting to bite. For some, it’s Bela Lugosi. For others, it’s Christopher Lee. There’s only one Dracula for me, and it’s Gary Oldman in Francis Ford Coppola’s adaptation entitled Bram Stoker’s Dracula. A lush costume piece anchored by a dark and decadent romance, the film feels like curling up with a mug of bourbon-spiked hot chocolate on a cold winter’s night.

This movie gets a lot of flack for its weak points—sorry, Keanu Reeves—but there’s a lot it absolutely gets right. First point: the story. I initially wasn’t allowed to see the film when it came out (due to its R rating) but I was allowed to read the book. I was a teenager, and in the middle of a huge diary reading and writing phase, so a text composed completely of letters, telegrams, and journal entries was right up my alley. I devoured it quickly, revisiting many times since. And the plot is all there, laid out from the source material.

The only tweak was a smart one on James V. Hart’s part—he took the Dracula myth back to its historical source (Vlad the Impaler) and amplified the romance between Dracula and Mina by adding in the themes of reincarnation and redemption. While woven throughout the film, these concepts also bookend the beginning and end of the film beautifully, making the love story that much more powerful.

The film opens in 1462, with Vlad (Gary Oldman) returning from war to find his wife, Elisabeta (Winona Ryder), threw herself off the castle balcony after false news of his death. The priest (Anthony Hopkins) says she is now damned for committing suicide and it causes Vlad to renounce the god he went to war for. In his anger, he punctures a cross in the church. Everything begins to bleed and Vlad announces that “the blood is the life.” 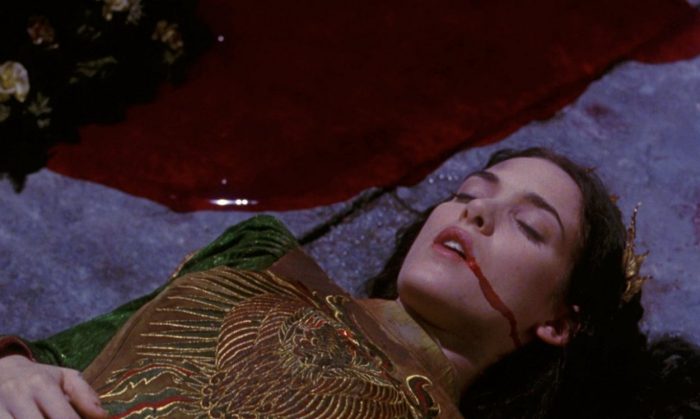 Next, the film fast forwards to 1897 and the classic tale unfolds with Jonathan Harker (Keanu Reeves) traveling to Transylvania to discuss real estate and other business matters with Count Dracula, taking over for the now-committed Renfield (Tom Waits). He leaves his fiance Mina Murray (also Winona Ryder) with her childhood friend Lucy Westenra (Sadie Frost) who is busy trying to choose between three suitors vying for her hand: Dr. Jack Steward (Richard E. Grant), Quincey P. Morris (Bill Campbell) and Lord Arthur Holmwood (Cary Elwes). When Dracula sees a picture of Jonathan’s fiance, he believes he’s found the love he lost long ago, so he hatches a plan to get to England, but not before letting his vampire brides have their way with Jonathan. And when the Count arrives in London, he seduces and turns Lucy into a vampire, which will bring Dr. Van Helsing (also Anthony Hopkins) into the mix and unite all her suitors into a vampire-fighting fellowship of sorts.

The Many Faces and Forms of Dracula

The film boasts a stellar cast who fare well most of the time—or at least do their best to keep up with their more seasoned counterparts. But honestly, this is Oldman’s film. He is a love-sick grieving warrior. He is an ancient Count. He’s also a hungry wolf, a dashing prince, and a bat. He’s a man wanting redemption and peace. Suiting up in both stunning costumes and amazing makeup and prosthetics, he is a figure to both fear and be seduced by.

Much of the behind-the-scenes footage shows Oldman struggling at times or asking Coppola to give him a mark to work with as he gathers himself for multiple takes. Acting is one thing, but to act at the level Oldman is able to despite physical constraints is another. It’s not surprising that the film won an Oscar for Best Makeup. It’s a tragedy that Oldman wasn’t even nominated for Best Actor. (He was also overlooked again for his work in Immortal Beloved.) He is at once terrifying as a bloodthirsty Count, licking Jonathan’s shaving razor with a mixture of glee and repulsiveness. Later on, he’s tender and dashing, winning Mina’s trust only to wish not to turn him into the monster he knows he is.

“I love you too much to condemn you.”

He gasps these words out like a drowning man reaching for a nonexistent shore. The same man—or monster—who has condemned so many to death, or worse—living forever without love. It is a plea we’ll hear again at the end when he wishes to die, and when he finds peace, his lips quiver and his eyes turn upwards, like religious paintings of Jesus at the crucifixion.

But condemn her, he does and so the vampire hunters and Mina chase the Count back to his castle in Transylvania to put an end to his terror and save Mina from becoming damned as Lucy was. Ironically, his biting her has only made Mina stronger. Van Helsing famously calls her “the light of all lights” and now due to her strong psychic connection to Dracula, she is able to light the path to him.

Giving Mina the spotlight here is also an improvement from the source material, as Mina’s narrative goes away, with the men’s journal entries telling much of her story through to the end. Stoker either felt unable to continue telling her narrative or felt it inappropriate and thus shifted to the men’s perspectives of Mina’s plight. (Other writers have noticed this and have done their best to fill in the blanks, most notably Alan Moore’s graphic novel The League of Extraordinary Gentlemen and Marie Kiraly’s novel Mina if you’re in the mood for supplementary reading.)

Again, Hart’s changes are right on the money and allow Mina to stand on her own and up to the men that seek to kill what she loves. As she protects a mortally injured Dracula, she turns a shotgun on them and asks Jonathan point-blank: “When my time comes, will you do the same to me?” Jonathan says no and lets them go into the church where our tale began.

Costumes as Extension of Character

Outside of the story itself, the strongest element of the whole production remains Eiko Ishioka’s now iconic costumes. Coppola was quoted as saying he wanted the costumes to showcase the cast. Ishioka’s costumes are a master class study in weaving literal character, emotion, and meaning into garments.

For example, red evokes blood and vampirism, and so Dracula’s armor in the opening scene is a rusty red with a horned helmet, hinting at the turn from man to an immortal demon. He wears red again when he greets Jonathan after his long journey. Both Lucy and Mina succumb to vampirism and as they are tempted, their wardrobe changes from green to red, with Lucy’s blood orange sunset nightgown and Mina’s breathtaking red ball gown as prime examples.

Also, it may seem odd dressing both leading ladies in pale green, but it’s a color that recalls newness and innocence. Mina’s gowns often feature vine or greenery motif whereas Lucy’s has snakes—a clue that due to her sensuality that Dracula will reach her first.

The men are often dressed in cool or icy shades of gray and brown, relaying that they are diminished in Dracula’s presence, while Dracula’s brides are dripping with jewels and pale and flowing gowns, making them equal parts ghostly and seductive. Lucy’s wedding-turned-funeral gown has a lizard-like quality to it that makes her eerie and oddly beautiful and plays on her earlier-established snake motif.

After her encounter with Dracula, Mina’s color palette deepens to a darker green, which recalls the gown that Elisabeta wore upon Dracula’s departure and her in death. In the closing scene of the film, Dracula’s travel gown references Gustav Klimt’s The Kiss, setting us up for a lush, blood-gushing romantic ending.

In the novel, the gallant vampire hunters corner Dracula and kill him. Here, it is Mina who must give him peace, as he asks where is the God that has forsaken him. (Earlier, during a fight with Van Helsing, Dracula recalls that he fought for the very God they are trying to protect themselves with, again echoing the opening fight with the priest over Elisabeta’s soul.)

Mina realizes their love is stronger than death itself, and so she grants her love’s dying wish—to die and be reunited with Elisabeta. So it’s Mina that drives a sword through his heart and cuts off his head (as the vampire hunters did to Lucy). As she lifts her head to the heavens, the camera pans to a fresco of Dracula and Elisabeta reunited at last. 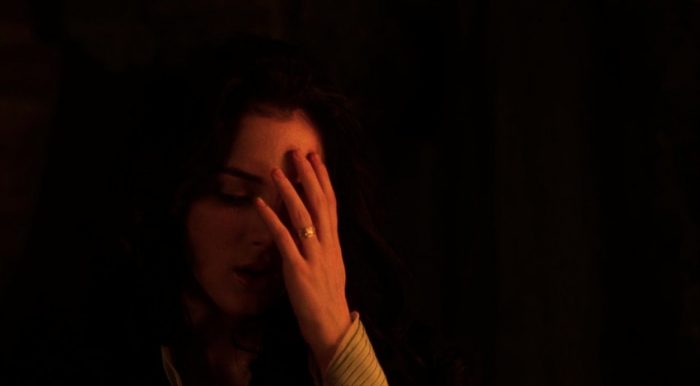 While the film was made in the early 1990s, Coppola employed a variety of old-school filmmaking techniques rather than relying on new-fangled special effects. Techniques included forced perspectives, multiple exposures, and so on. Pairing this with the opulent costumes and incredible makeup means the film does not feel dated in the way other early 90s films might. Whether it was a nod to the source material itself or the Hammer Horror films inspired by the novel, it works well here.

Last but definitely not least is the music—Wojciech Kilar’s score is equal parts epic and restrained, with the vampire hunters’ theme being used on many a trailer as well as Dungeons and Dragons session since its release. Annie Lennox’s end credits theme, “Love Song for a Vampire” is a gothic love song for the ages, filled with burning synths and haunting layered vocals, a bittersweet epilogue for the film that came before it and the vampire who crossed oceans of time to find his long lost love:

“Let me be the only one

To keep you from the cold

Now the floor of heaven’s lain

With stars of brightest gold

They burn for all to see

Come into these arms again

And set this spirit free”

No matter how many Draculas may come and go, this is my adaptation of choice—dark, lush, and decadent like the best dark chocolate or finest red vintage. This one is worth a rewatch and reconsideration.