Rick and Morty S4E4 is a lot like S3E3—the one with Pickle Rick. Both episodes had two storylines: one that was visually interesting, and one that was thematically interesting. Furthermore, in both episodes, the visually interesting one was fun the entire way through, but the thematically interesting one really only picked up speed at the very end. The visual storyline involves Rick getting Morty a dragon that doesn’t really like Morty, but does take a liking to Rick. This eventually drags them into an alternate dragon world where much action happens, along with quite a few sexual metaphors. The thematic storyline is far more subdued and follows Jerry and a talking cat on a muted, emotional journey to Florida and back. Rick and Morty’s wild adventure of sexual release is distantly mirrored by Jerry and the cat’s arc of melancholy and tepidity. S3E3’s storylines more tightly corresponded, since both of them were directly coiled around Rick’s unhinged and dysfunctional family dynamic.

This makes sense since S3E3 was a better version of this kind of episode than S4E4. Firstly, the visual storyline was better because it was more emotionally involved and the stakes were more viscerally present. It also capitalized on its visual nature better: Pickle Rick’s melee with Jaguar was a nearly perfect parody and homage to the Marvel Cinematic Universe, whereas the gang’s adventure in dragon world had a few brief shots at Lord of the Rings and really none of the grandeur. This might have been because they tried to shoehorn in a second dimension of humor regarding the constant sexual references.

Secondly, the thematic storyline in S3E3 had much more compelling connection to the characters involved. Beth and the kids slowly and tediously unpacking their family dysfunction with a school psychologist was a sublime idea and was perfectly executed. Compare that to Jerry’s sojourn with this meek talking cat. The first scene was funny, with Rick having absolutely no idea why a cat might talk and just leaving Jerry and the cat to their own devices. But after that, the entire storyline was simply the cat being meek and Jerry being pensive, then happy, then sad. The storyline wasn’t clear about what this development revealed about Jerry or how it changed him. And the talking cat never really broke out as a compelling character. Wasn’t Beth absent for most of the episode? She could have been an interesting additional ingredient for the Jerry/Cat storyline. 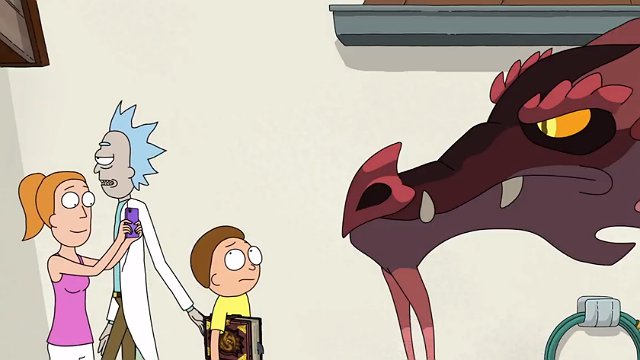 Now, to be sure, everything became riveting in that final minute when Rick and Jerry realized where the cat came from (without being revealed to the audience). They force the cat into exile, and Rick apparently thinks it severe enough to wipe Jerry’s memory of the revelation. Maybe not as thrilling as the final exchange between Pickle Rick and the psychologist, though still deeply intriguing. But unfortunately, it feels a tad wasted. Becoming invested in that storyline was difficult in the first place. And this payoff only came in the final minute of the show. If that plotline picks back up in S4E5 or beyond, then it would have all been worth it. And to be fair, Rick’s comment about the cat making a good season finale does hint at a future return. But if it’s just left here as a tantalizing loose end that’s never resumed, then it does feel like a wasted opportunity. And if it’s never resumed, then it also doesn’t justify the meandering narrative of Jerry and the cat wandering to Florida and back.

Rick, Morty, and Summer also had a very entertaining storyline that worked more on a visual level. It did have one interesting thematic element in that the dragon was clearly intended to eventually soul-bond with Morty, its rightful owner and rider, though the dragon ended up soul-bonding with Rick, who has more emotional assertion and less timidity than Morty, which the dragon finds attractive. Unfortunately, this dynamic is somewhat cast aside midway through the episode, and only really serves to tee up the jokes about sexual promiscuity.

But before you fault this visual storyline for having thin plotting, remember why you sat down at a TV to watch Cartoon Network in the first place. Animation is awesome! People forget how much visual weight good animation can actually pull. If dramatic plotting and funny gags were the only things we wanted, we could more easily have them in short story format. We flock to those elements being portrayed in cartoon form because the simple fact of it being a cartoon is itself a lot of fun. That’s partially why the Pickle Rick sequence was so thrilling, and much of the same principle applies to these hyper-sexual dragons. However, it is also true that the Pickle Rick sequence was also very well motivated and had a more coherent concept. But the illustrations of these dragons and their dazzling, pseudo-sexual energy fields are very visually impressive, and that’s worth appreciating. 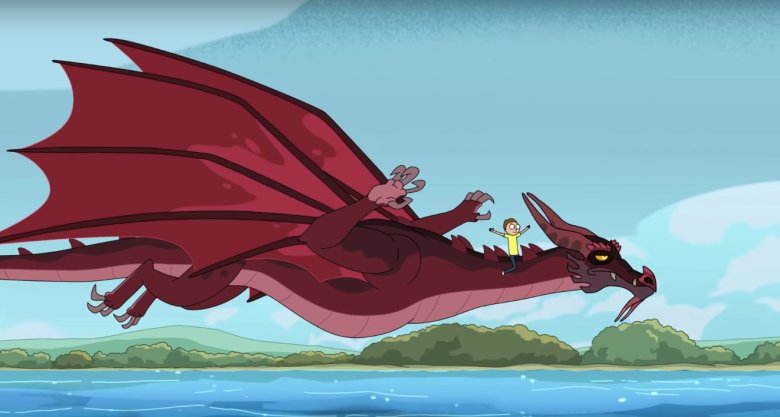 It might be unfair to dress down this episode by comparing it to one of the best Rick and Morty episodes ever. But S4E4 invites this comparison because of how similarly the episodes are structured. The difference is that S3E3 was not only an exceptional episode, but it was exceptional purely as a standalone episode. S4E4 of course is not exceptional, but it might end up being a very fine prequel to some future episode, depending on what the writers do with that cat. Also, a quick reminder that we’ve nearly gone a fully “season” without a single mention of Evil Morty, President of the Citadel. What if he has a future storyline involving the talking cat and its origin! Now THAT would be cool.