Mr. Robot S4E10 “410 Gone” centers on Dom and Darlene. We start with the former in the hospital. She is told her family is in protective custody, but she can’t see them. (I wonder how they got there, since last we saw they were being held by Deegan McGuire.) The FBI guy recommends that she get a good night sleep, but once he leaves she insists on being discharged against medical advice. I guess she really wanted a grilled cheese sandwich.

She’s making that sandwich when Darlene knocks on her door and insists that she come with her to avoid the Dark Army. That makes sense, as presumably they’d be after Dom to finish the job given the way she killed Janice and all.

They go to a motel, Darlene has a moment with Elliot, and Dom finds Leon. He doesn’t remember her at first, but once she reminds him he assures her that he is now working with Darlene and Elliot, not the Dark Army. It’s all about the Benjamins. 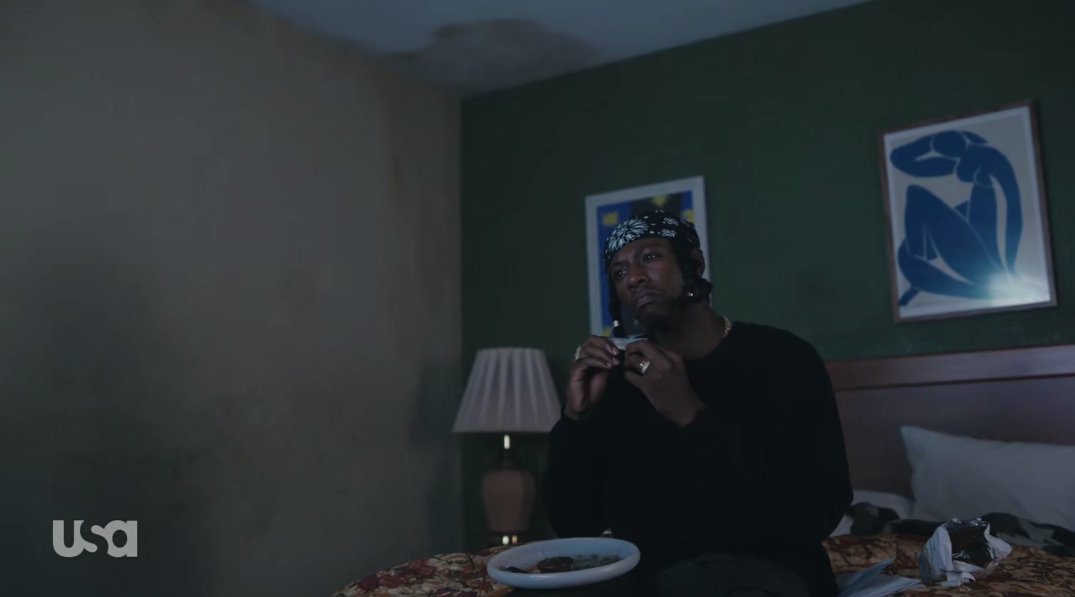 I’m not sure this makes sense, as the Dark Army does not seem to be the kind of organization one could simply walk away from. Is there a chance Leon is lying, or should we take this at face value?

Leon drives Darlene and Dom to Boston, taking the scenic route because Connecticut is full of “RWAs” and they are the Dark Army’s primary clientele. As he mentions needing to find a rest stop, he says something to Dom about stealing a mirror, Vonnegut, and laments that no one reads anymore. Here’s an interesting bit: shortly thereafter, at the rest stop, Darlene tells Dom he said basically the same thing to her and she decided to walk away. It would seem that Darlene was asleep the first time in the car, but are we to think that he said the same lines over again? Or is it maybe that Mr. Robot is subtly presenting us with alternate realities? Could the fact that Kilgore Trout in Breakfast of Champions (the Kurt Vonnegut novel Leon is referencing) likes to think of mirrors as leaks, or holes between universes, be a further clue?

In the brief scene Mr. Robot S4E10 gives us with Elliot, he is checking out the drive that Price gave him with info about Whiterose’s project. We don’t see a lot, but there is an indication that it relates to CERN in some way, and a particle accelerator that is even stronger than theirs. 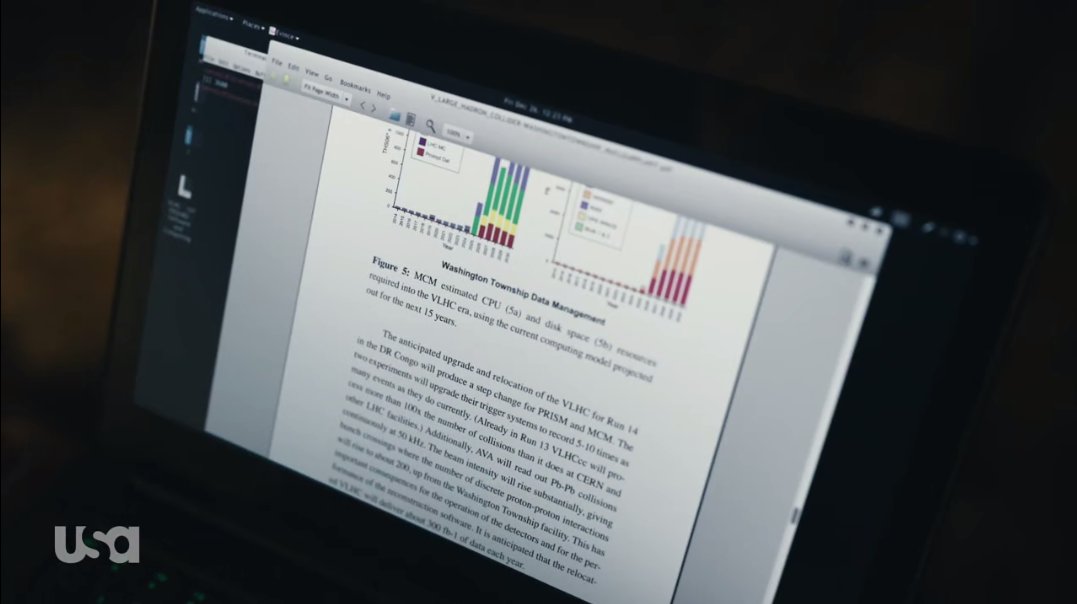 Now, one of the concerns about the Large Hadron Collider was that it might create black holes, and while the scientific community has assured us that the risk here is minimal to nonexistent, what about with a machine that went further?

It is also worth noting that none less than Stephen Hawking has speculated about the possibility that black holes might provide a path to alternate universes.

As such, I now feel confident in endorsing an idea that I have had for a long time: Whiterose’s plan is about opening up access to other realities—ones where people have not died. If Many Worlds theory is right, then out there somewhere is the Best of All Possible Worlds. I think Whiterose wants to make that the only one.

Of course, we might debate about what makes a World the Best. Several hundred years ago, Gottfried Wilhelm Leibniz posited that a virtually infinite number of worlds were possible, and imagined God considering all of those possible worlds in order to decide which to create. And, of course, God being God, he argued that the (only) existing world must be the best of all of those that were possible.

But without faith in a Leibnizian God, we might really worry about where this is going if Whiterose manages to succeed. Leibniz contended that this is the Best of All Possible Worlds because God is good and eminently rational, so of course would choose the best one. Can we have any kind of similar faith in Whiterose?

How The Hell Are You?

Dom and Darlene end up at the airport, because they are going to go to Budapest. They are going to go there because Cisco talked about it to Darlene, which is one of many examples of how Mr. Robot S4E10 pulls on past information in order to inform its story.

Another would be how the redistribution of wealth Darlene pulls off hangs on ECoin being kept separate from government currency. This addresses my worry that the Deus Group would be able to just get their money back, at least to some degree. I’m still not sure I buy it, but OK, it’s a TV show, and at least they provided an explanation.

Then there are Darlene’s panic attacks. Though they were only briefly mentioned before, we get to see one here. And I get it. Dom had told her she would fly with her, and then backed out. Proceeding to fly around the world on my own? No thanks!

Of course Dom changes her mind and ends up being the one to fly off the Budapest alone. I wasn’t sure what I thought of this at first. She almost gets off the plane when she realizes Darlene isn’t there, or coming, but then doesn’t. And in the final shot, she’s asleep—finally getting that sleep she hasn’t had in years. Perhaps Darlene was right that she needed to get away. It’s just a shame that they don’t ultimately get away together.

This has been a fraught relationship, what with Darlene initiating it in order to steal Dom’s access to the FBI and all. But they both know that, and I think there is genuine affection there. It ends up being a farce of circumstances, as Darlene runs to the bathroom, panicking, just as Dom returns to get on board the plane. I’m not sure what I think about that, but so it goes.

Dom is off to Budapest by her lonesome. I guess she’s OK with that. Either way, I doubt we’ll see her again.

What led to this chain of events, though, was the most amazing thing in Mr. Robot S4E10. Irving!

He’s finished his book, which is called Beach Towel (!), and is for some reason at the airport in Boston. He tells Dom it’s due to a book tour that is bringing him to UMass, and I guess she believes him, as she does when he tells her that the Dark Army doesn’t care about her any more.

I am very suspicious of this, as I was with Leon earlier. I suppose it’s possible that Irving is telling the truth and that the Dark Army doesn’t care about Darlene and Dom anymore. I mean, they’ve had their money taken away from them, so this would be a good time to reassess everything.

But, at the same time, I can’t help but think that this might be bullshit, and I’m really not sure why Dom doesn’t seem to entertain that thought at all. For example, if Irving is going to the University of Massachusetts, what is he doing in the outbound section of Logan airport in Boston? Unless “I got a little book tour stop at UMass” means that he had one, that he is now leaving from, but that strikes me as an odd way of speaking.

I don’t believe for a second that Whiterose has given up her plans. We don’t yet know what happened at the end of S4E9 as she put on lipstick while gunshots fired below, but I think there is every chance that she came out of that unscathed. And she was wearing the dress she planned to wear when her project was shipped.

Leon and Irving could well be part of some plan she has given how things have gone. Or maybe not. Maybe everything is as it seems to be.

But I doubt it. Even if it doesn’t involve Irving or Leon, Whiterose’s scheming isn’t over. We’ll see what she’s up to in the final three episodes.