This article is now available as an audio exclusive for our Patreon supporters. Join the gang and listen to Kacie Lillejord read her thoughts on this great movie, here: https://www.patreon.com/25YL

The 2011 psychological thriller film Dream House is tragically underrated. It does a splendid job of unfolding events and tying them all together to make one major plot twist. It’s enthralling, the way the film demands attention, particularly attention to detail. Every factor is key to the story, and if you miss one detail, the next won’t make much sense. To ensure you don’t miss a moment, you can stream via Amazon Prime, YouTube, iTunes, Google Play, Vudu and through a Starz subscription.

Will Atenton (Daniel Craig) moves his family to their dream home away from New York City, eager to begin a more relaxed life in which he gets to work on his novel and spend more time with his wife Libby (Rachel Weisz) and their daughters. Soon, their “dream home” is clearly anything but, as their daughters begin seeing a strange man lurking outside their windows, among other strange occurrences. With these developments, Will begins piecing together a horrifying reality.

Gradually, the strange occurrences begin to make sense. Why the police won’t help. A hidden room with children’s toys inside. An apprehensive neighbor, Ann Patterson (Naomi Watts) that refuses to let Will in on the deadly history of his new home.

The pacing is in harmonious synchronization as the audience, alongside Will, learns that a woman and her two children were murdered inside the house years before. The surviving husband is the main suspect. In search of the husband, Peter Ward, Will sets off looking for answers only to discover he knew them all along. He, Will Atenton, is Peter Ward.

Naturally, Will struggles with this new revelation. It means his entire world is non-existent. Libby and their daughters are dead, and he is the main suspect (due to lack of evidence, he is free). He refuses to believe it, but reality continually hits him headfirst.

For instance, at the beginning of the film as Will leaves his workplace for good, several people bid him farewell. When Will leaves the mental hospital in which Peter Ward was committed, he recognizes these same people inside the hospital’s walls and realizes that it coincides with what he had just been told: he was Peter Ward, recently released from the hospital, where he’d been committed since the murders of his wife and children. From the first moment, everything he’s known since his release has been a complete fabrication of his own mind’s doing.

Faced with this heartbreaking reality, Will’s home life begins to fall apart. He’s grieving, though Libby and the children, obviously manifestations within Will’s own mind, fear for his health. Later that night, the children become ill. They’re not sick but have been shot—just as they were in the final moments of their lives.

Libby refuses to believe her children are dying and angrily shouts at Will to help them, but it’s inevitable. Reality sets in, and he can do nothing. Will is then removed from the house, as it is condemned. At this time, audiences see the serious disrepair the house has fallen into outside of Will’s fantasy. Luckily, his neighbor Ann helps him, bringing him into her home so he can get cleaned up.

Will, accepting that he is Peter and that his family is dead, realizes that he is innocent. He was accidentally shot in the head by his wife, who was trying to stop the murderer. This injury, in addition to his trauma and grief, is what caused Will to form his alternate reality and to originally fail to remember what really happened the night of his family’s massacre.

His innocence is proven further when it is discovered that Ann’s ex-husband, intent on killing her out of revenge and taking their daughter for himself, sent a hitman to kill Ann the night of the murders. Said hitman makes the world’s worst mistake and enters the wrong home, killing the wrong people for no reason. This is the most terrifying part of the psychological thriller—it makes it seem more real outside of the screen, as though such an event could happen in real life. It may seem impossible, but this film proves the impossible to be possible.

This psychological thriller ends on a happy note, or at least, as happy as it can get considering the circumstances. Ann’s ex-husband and his hitman show up, intent to kill Ann and frame Will for it. Karma serves the two well, as they both die in a fiery inferno (after turning on each other) that was once Will’s happy home while Ann and Will escape.

Will gets one last opportunity to say goodbye to his family, which appears to be the closure he needed all along. Just before the fire overtakes his dilapidated home, he saves a scrapbook filled with precious treasures—pictures, drawings and other such things that were left behind by his family.

The film’s ending reveals that he has written a book about his experience, aptly titled Dream House, which has become a bestseller.

The human mind is simultaneously strong yet fragile. It’s a complicated phenomenon. No two minds are alike. When factoring in emotions like grief, devastation, and loss, especially on Will’s traumatic level, there’s nothing the mind can’t or won’t do in order to shield itself.

It is a physical instinct to block any hits you see coming, holding an arm over your face. The mind is no different. Whether or not the mind knows what’s coming, it does its best to help you move on—or at least to function.

As this academic article from American Psychologist points out, there are three broad classes of coping mechanisms. The first is when an individual seeks social support. It could be from friends, families or professionals. The second is when an individual utilizes conscious cognitive strategies to make the best out of a bad situation. It could be repeating positive mantras or conducting an activity to make yourself feel better, like art therapy.

The third coping mechanism is considered less conducive to mental healing. This tertiary method is known as an involuntary mental mechanism, which tends to distort an individual’s perception of external and internal reality in order to reduce subjective distress. In some circumstances, this method can be beneficial to certain degrees, but in Will’s case, it’s incredibly damaging.

The involuntary mental mechanism is what Will suffers from, given his belief that his family is still alive and that his house is in good condition. Granted, witnessing the murders of your wife and two young children is beyond traumatizing. It’s something you certainly never forget and can never un-see. In Will’s case, the possibility that he was to blame lingered for the longest time before he learned the truth. Having to live with that in addition to the grief is undoubtedly unbearable, and thus, in the worst of circumstances, the mind takes the initiative to cope.

The Cinematic Brilliance of Debunking a Coping Mechanism

Clearly, method number three of involuntary mental mechanisms only works for Will for a relatively short period of time, considering he’s got the rest of his life. He concocted an entirely new identity from his ID band, gained from his time in the hospital, and managed to convince himself of his family’s presence. His vision of his alternate life was so vivid that he saw past the dilapidated state of his own house, to the point of envisioning his wife and daughters painting colorful flowers around their staircase, among other DIY projects. The strength of the mind’s belief in the unreal is a force to be reckoned with.

Still, reality finds ways of creeping back in when Will least expects it. It seeps into his daily life when he finds teenagers gathered in the basement, when a car nearly runs him over, when his daughters discover a hidden room in their bedroom filled with children’s toys, labeled with the names of the murdered children, for instance.

The final break in his alternate reality is when he goes to investigate Peter Ward and he sees himself, albeit a scary version, in an old video recording at the hospital. After that, his alternate reality dismantles entirely, and he is faced with the task of picking up what’s left. He has to face being nearly killed by the same men responsible for the death of his family. Yet, he gets to really move on this time because he said his goodbyes to his family, who let him know they would be okay, and left the house that brought him both the greatest joy and the deepest pain.

Coping mechanisms like Will’s, unless dealt with healthily, will only last so long before they’re broken into. Reality is inevitable, and Dream House proves this with delicacy. The film is paced beautifully, providing clues and solving them at just the right moment. One of the main messages of the film is that coping mechanisms are just that—coping mechanisms. They are temporary solutions for situations that require more of a degree of permanence. Depending on which mechanism you use, it could be vital to your recovery or fatal.

Daniel Craig’s performance as Will Atenton/Peter Ward is phenomenal, moving, and sensational. His performance bleeds off the screen, straight into the hearts of audiences as they feel his great pain but also his great relief as he finally lets go of his demons. I rooted for his character, believing him incapable of the murders his community believed him to be guilty of. He deserved peace and happiness after all he had been through, and with his damaging coping mechanism gone, he was able to get those things, heal, and ultimately move on. This ending is what his wife and daughters wanted for him, apparitions or not. 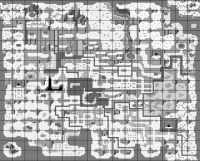