I’ve never been a big fan of musicals. There have been exceptions: I liked Grease, Annie, and The Wizard of Oz back when I was a kid, and I became a huge Rocky Horror fan as a teenager (but that was more a matter of exploring my identity and enjoying the audience participation in the movie theater than anything else). Besides those films, I just couldn’t get into a bunch of people breaking into song during a movie. Plus, most musicals had such lightweight plots concerning romance, and the songs were usually show tunes of some sort (not really my kind of music).

So how did Meet Me In St. Louis become one of my favorite films of all time? Picture it: Christmas Eve sometime in the 1980s. A boy about 10 years old is at home, anxiously waiting for his relatives to arrive for the annual Christmas Eve party. The problem is that it’s noon, and the party doesn’t begin until 5 p.m. The holidays are magical when you’re a kid, especially when you’re expecting awesome presents. The boy doesn’t know what to do with himself to pass the next few hours, so he looks in the TV Guide (oh, the good old days of owning a TV Guide, lest you’d have no idea what was on television) and sees there’s a movie on a local station that has something to do with Christmas. He reads that it’s two-and-a-half hours long and that Judy Garland is in it, and he knows her from The Wizard of Oz. He figures that by the time the movie is over, it will almost be time for the party to begin!

So while his mother prepares chicken cordon bleu and other food in the kitchen, the boy curls up on the couch with an afghan and settles in to check out this holiday movie. OK, let’s give up the ruse: The boy was me, and the movie was Meet Me In St. Louis. It didn’t take me long to realize that it wasn’t really a Christmas movie (only the last third of the movie takes place on Christmas). I ended up watching and waiting for the Christmas part to come, much like how I was already waiting for the party. For reasons I still don’t fully comprehend, I formed a real bond with the film on that day, so many years ago. I had never seen a movie that was so warm and inviting, featuring a family that you almost feel is an extension of your own. I’ve rewatched the movie many times since my childhood—in fact, it’s become a holiday tradition for me to watch this movie on Christmas Eve or sometimes the next morning while my family is opening their presents. Maybe after reading this article, you’ll want to make Meet Me In St. Louis a tradition in your home as well. 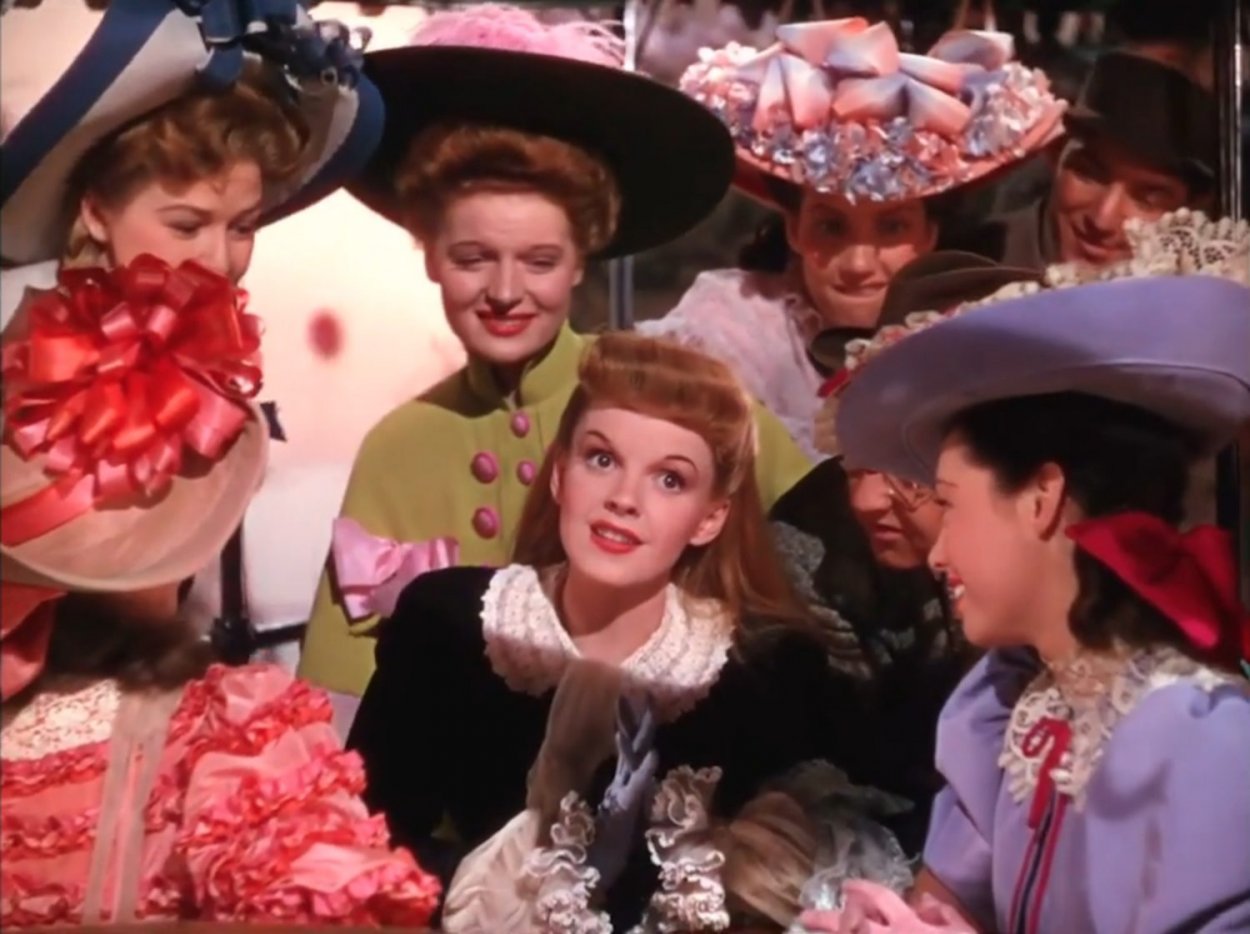 The Plot: This film is wonderful, but it doesn’t have the most engrossing plot in movie history. We get a peek into a year in the life of the Smith family, who reside in St. Louis, Missouri. The story takes place from summer 1903 until the spring of 1904, giving the movie a nostalgic slant even when it was first released back in 1944. Our main character is teenager Esther Smith (Judy Garland), and the story is loosely centered on her courtship with next-door neighbor John Truitt (Tom Drake). Esther’s older sister Rose (Lucille Bremer) has romantic tribulations of her own, and we also spend some time with two other younger sisters and a brother, their grandfather, their parents, and Katie (the live-in maid)—this is a big family. How does father Alonzo financially support himself and six people (and be able to afford a maid) when he’s the only one in the house with a job? It makes me wonder if this was something that was feasible in 1903 or just another case of movie magic.

The main thrust of the plot occurs when Father announces that he has accepted a job transfer to New York City, forcing the Smith clan to come to terms with leaving their beloved home in St. Louis. The family seems to gradually accept the move to New York until just a few days before they leave, when Judy has an emotional breakdown while singing “Have Yourself a Merry Little Christmas” to younger sister Tootie (Margaret O’Brien). This starts a chain reaction of family members expressing their sorrow about the move, leading Father to change his mind at the last minute and decide to stay in St. Louis after all.

This all reads as being more dramatic than it plays out onscreen. This movie is not designed to keep you on the edge of your seat, wondering where the Smiths are going to live next year. Instead, this movie is all about the little moments that bring a family together. It’s about the bond that this family has with its hometown. It’s about love and relationships—all filtered through a bright, Technicolor haze and peppered with beautiful, memorable songs. Throughout the film, there is no real doubt that everyone will get a happy ending. It’s best to look at Meet Me In St. Louis as a paean to the simple things in life and a love letter to the American family at the turn of the century (although its message transcends the era and can maybe be appreciated even more in modern times).

All four seasons of the year are represented in this picture. Each season adds an emotional layer to the movie. 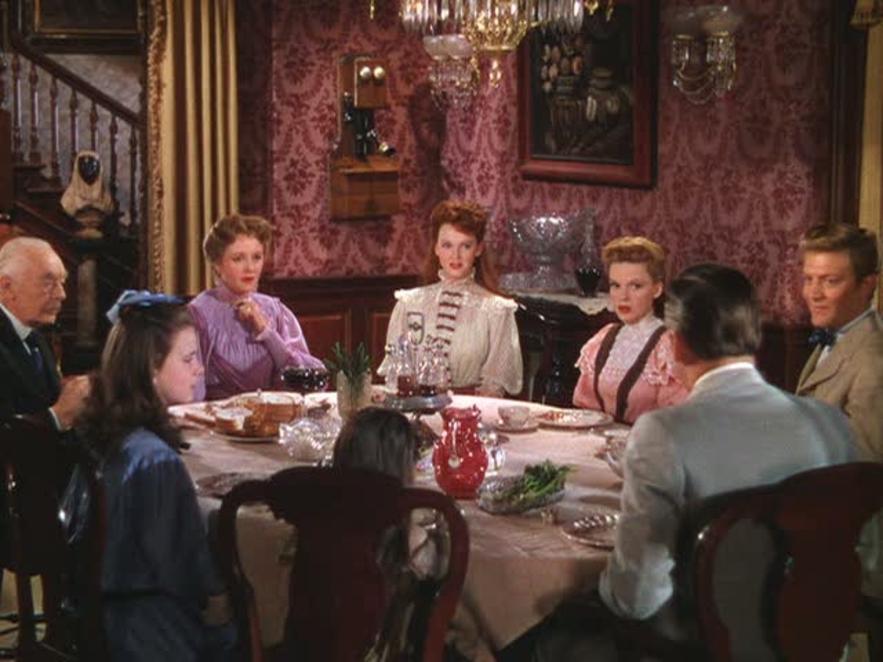 Summer 1903: We are introduced to the Smiths. Esther’s romance with her neighbor John is established. We also get a glimpse into sister Rose’s budding (and somewhat lackluster) relationship with long-distance boyfriend Warren Sheffield. We see how the family relates to each other during an extended dinner scene, then we delve into the children’s social lives amidst a lavish party thrown at their house. The Smith family is likable right from the start, although Father is a bit of a stern grump. Perhaps it’s even a cliche—the “strict-but-fair” father who works hard all day and doesn’t want any nonsense when he returns home at night. By the end of the summer portion of the film, Esther has had her meet-cute with John, and we have been treated to a handful of lovely songs. The most notable tunes are undoubtedly “The Boy Next Door” and “The Trolley Song,” which became standards of Judy Garland’s repertoire for the remainder of her career. In particular, the entire scene encompassing “The Trolley Song” is a classic. The vibrant colors, the blocking of the actors, the sheer jubilation of the music and the vocals—the trolley sequence is a big reason why Meet Me In St. Louis was selected for preservation in the United States National Film Registry. 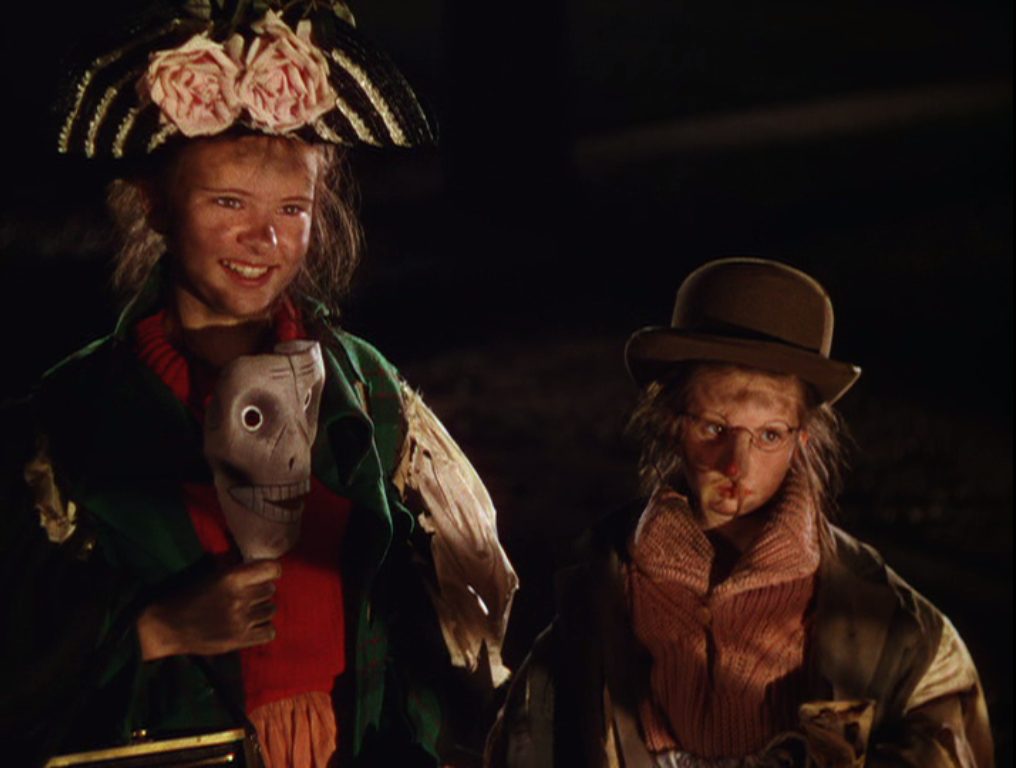 Autumn 1903: This portion of the film takes place entirely on Halloween night. This time the spotlight is on six-year-old Tootie as she and her sister Agnes (Joan Carroll) engage in some trick-or-treating pranks and misadventures. Meanwhile, Esther and John share their first kiss (and their first argument). By the end of the evening, Tootie has become the most popular kid on the block by being brave enough to venture to the doorstep of the scariest house in town, and Father has put the family on a downer by announcing their impending move to New York City. Director Vincente Minnelli had to fight to keep Tootie’s Halloween sequence in the finished product. MGM studio executives thought the extended scene was too slow and had no relation to the movie’s plot. Minnelli argued that the scene was crucial to the storyline because it showed why the town of St. Louis was so important to the Smith family—St. Louis was their home, and New York City never could have been the same. There is only one song during this part of the film, the wistful ballad “You and I,” sung by the mother and father at the piano. Honestly, I’ve never really cared for this tune all that much. It’s very downbeat. It’s not an awful song by any means, but every time I watch the movie, I find myself waiting for the song to end from the moment they first start singing it. 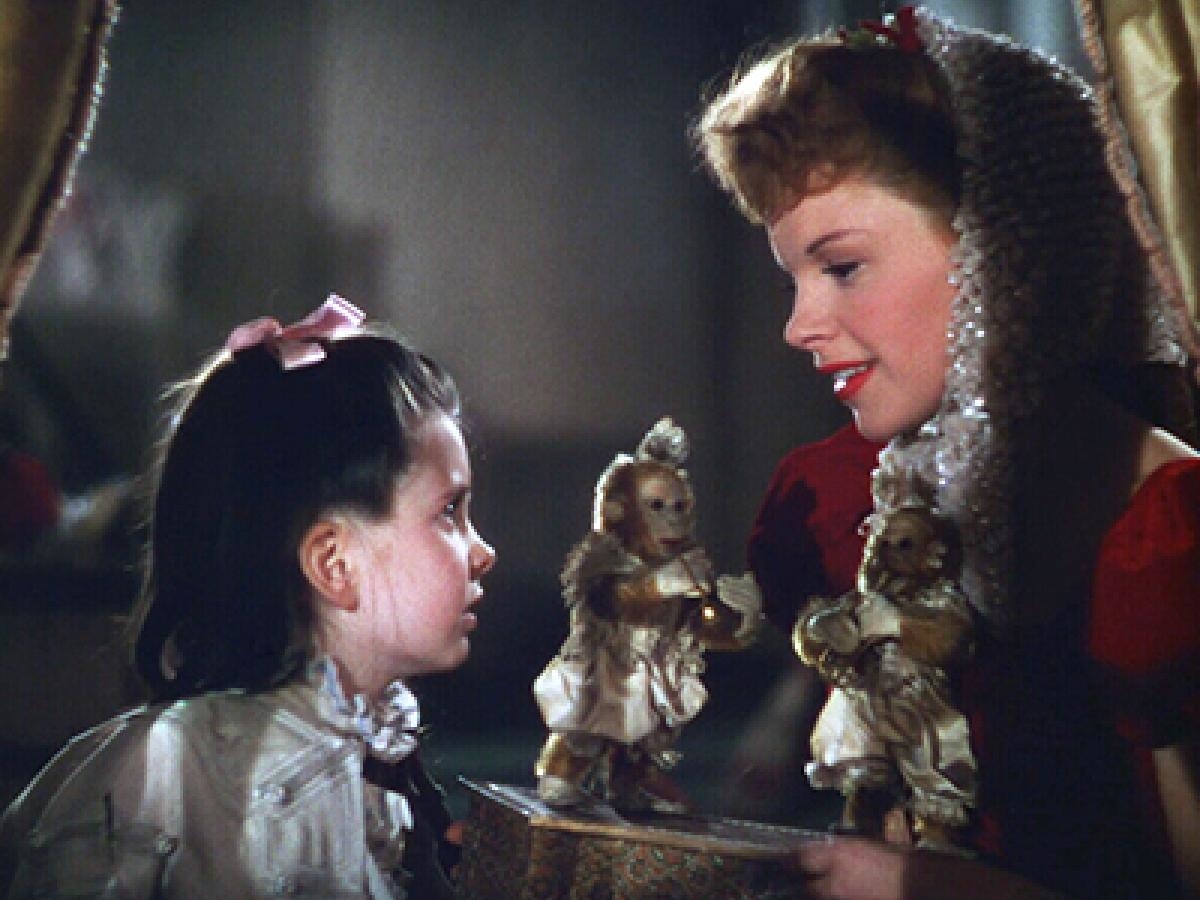 Winter 1903: Even though we still have one more season to go after this, the winter scenes are the climax of the movie. There’s an elegant ball on Christmas Eve, and the family is just a few short days away from their big move to New York City. Esther and Rose accept marriage proposals from their prospective beaus, and young Tootie is in hysterics over the impending move. Father changes his mind at the eleventh hour, deciding to stay in St. Louis after all. Everybody hugs, everybody’s happy…The End. If it sounds like the stereotypical contrived, happy, Hollywood ending, that’s because it is, but it works for this film. You can’t have a lavish musical that ends with a family being ripped apart by being forced to move across the country, where they will be unhappy. I think I’ve gotten too accustomed to watching arty, bleak Criterion movies; it feels so unnatural to be writing about a film with such a blissful, joyous finale. But I think I’ve earned this happy ending. This section of the movie contains the perennial Judy Garland classic, “Have Yourself a Merry Little Christmas,” performed in another masterful scene where Esther sings to young Tootie while they both gaze out the window at snowmen in the backyard that they are poised to abandon forever. I will warn you that if you are invested in this movie, you will find it very hard not to tear up during this scene. 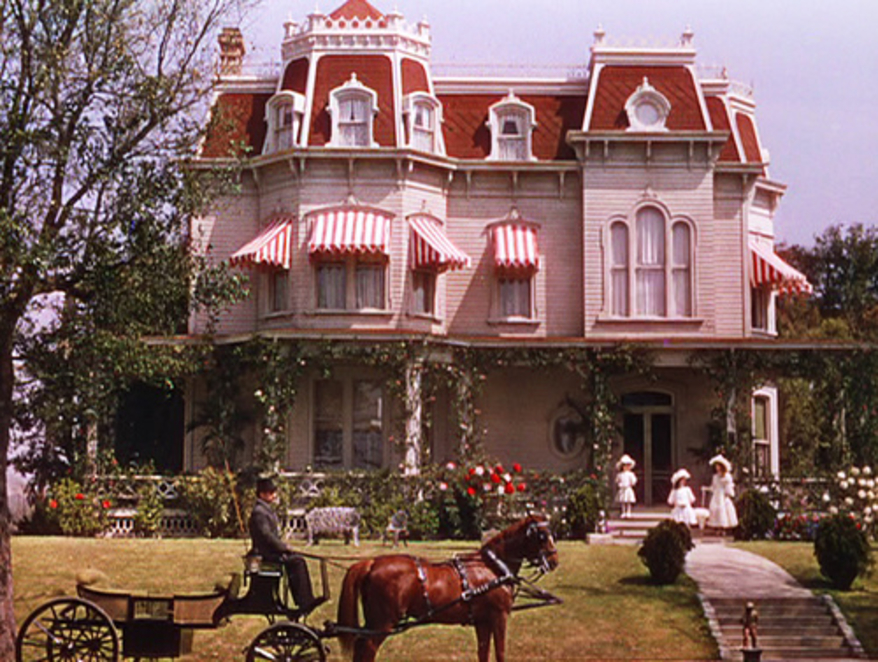 Spring 1904: This is the final scene in the movie. The Smiths hop into a horsedrawn carriage that takes them to the World’s Fair, which is being held in St. Louis that year. The World’s Fair is a Very Big Deal for this family. The movie ends with the Smiths rejoicing at the fair.

Judy Garland ended up marrying director Vincente Minnelli not long after the making of Meet Me In St. Louis. Their marriage lasted six years and produced one child (Liza Minnelli). Judy has said that no one made her look as beautiful onscreen as Vincente Minelli did in this film, a statement with which I concur. This movie may not make any kind of important statement about the world, but it is an emotionally rich, gorgeous MGM musical that may be the very best of its kind. 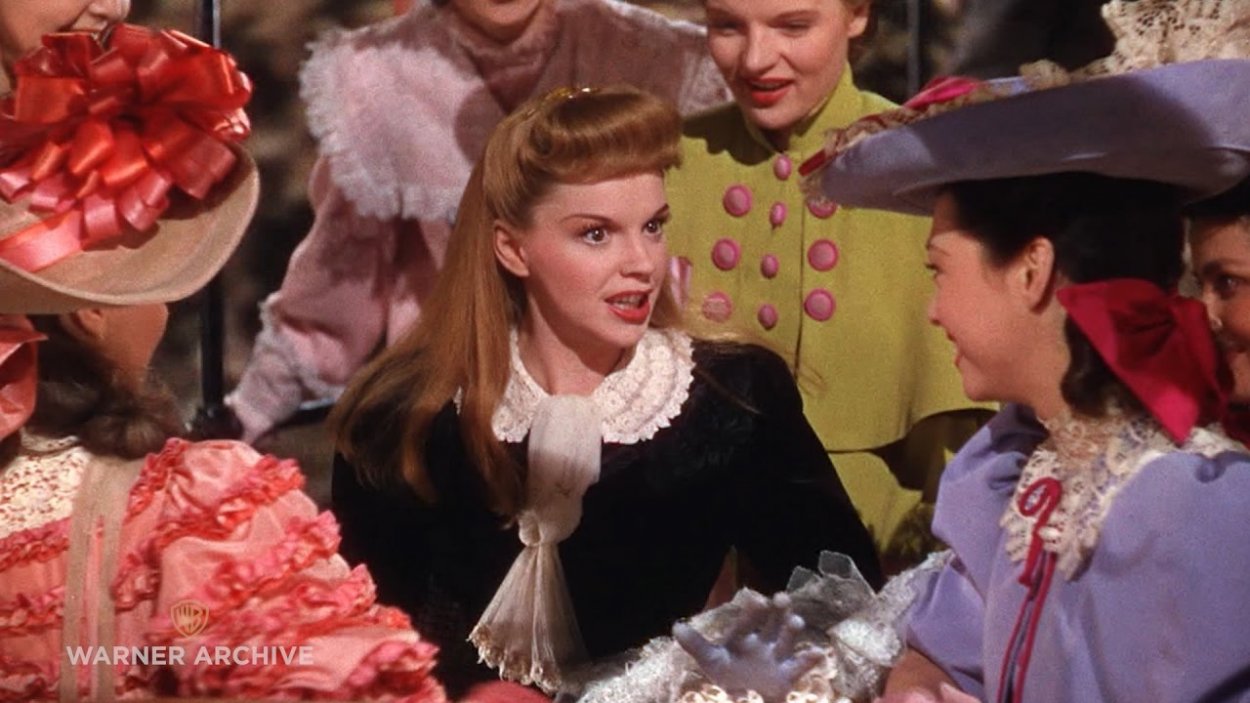 When I decided to start writing this article. Meet Me In St. Louis was streaming on the Criterion Channel. It has since been removed from the streaming site but is available on DVD.