Mr. Robot S4E11 “411 eXit” breaks with all of the previous episodes of Season 4 by having a title that is not the 4xx client error code that corresponds to the number in question (that would be 411 Length Required). It also breaks with the reality of everything that has happened on Mr. Robot prior to S4E11, as we finally get to see Whiterose’s project come to fruition. (Or do we?)

While I felt confident last week positing pretty definitively what that plan entailed, I remained unsure whether it would happen. I figured we would get more information about it, but thought it was possible that Elliot would destroy the machine or something, and Mr. Robot would leave it ambiguous as to whether Whiterose’s project would have worked.

Hey. You’re in the Wrong Place

Mr. Robot S4E11 begins in a way that segues from the “Previously On” footage much like the first episode of the season did. We see Whiterose doing her makeup as the FBI attempts to raid below, and hear shots fired, before some Dark Army associates come to bring her out of the house. The G-men are all dead, and she says that Mr. Zhang is, too. Now, there is only Whiterose.

Elliot’s arc equally starts off from where we left off, with him talking to Darlene in the motel parking lot about Sour Patch Kids. One thing I think is worth noting here is that, as they say their farewells, Darlene turns to Mr. Robot and says something about how she has started to like him more since he’s stopped being such a dick.

I’ve often wondered about the reality behind Elliot and Mr. Robot seemingly occupying different spaces. It’s been all over the place in the series. Rationally, if Mr. Robot is just a part of Elliot’s mind, then we would chalk this up to the show having an unreliable narrator, visually speaking. That is what I have tended to do, particularly given that Season 2 gave us a whole lot of that.

So this quick moment from Darlene strikes me as not nothing, even if I don’t know precisely what to do with it as yet. She was just talking to Elliot in the middle of the parking lot, said goodbye, and then throws this remark to a Mr. Robot who is in a different space leaning against a car. And it’s clear who she is talking to. What do we make of this?

Then, Elliot is off to Washington Township because he’s set on wrecking Whiterose’s plan. I have no idea how he was planning to get into the nuclear power plant, but that problem evaporates as he gets there to find everyone fleeing and the security post abandoned. So he just walks in.

Now, a rational person would be concerned about this state of affairs, but not Elliot. I guess he views it as a bit of good luck—until he starts seeing dead bodies, at least. And all of this culminates in him meeting Whiterose face to face once again. 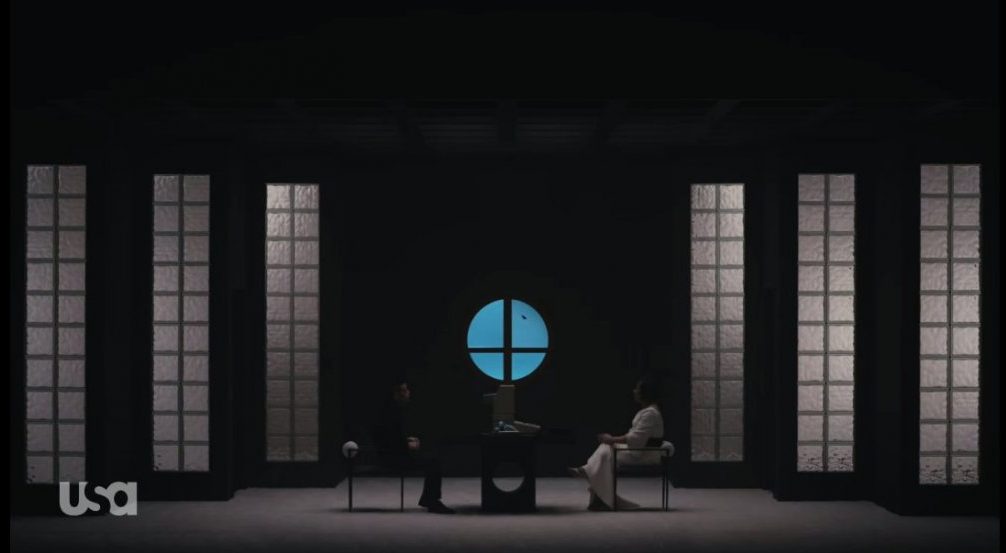 It’s a setup similar to what we saw previously with Angela, although there is no weird preliminary interview by a child this time. There is a copy of Tolstoy’s Resurrection (with Angela it was Lolita—one of many references to that novel on Mr. Robot, though most have been related to Darlene) and QWERTY is in the fish tank. This is not the same room Angela was in.

Whiterose explains her motivation—which I think was already clear—and they both lament the present state of the world. They make some good points, as Whiterose says that she was kept from being who she truly is, her one true love was taken from her, and it has gotten to where self-hatred feels normal for everyone. The world is fucked, and they tell us we’re to blame. And perhaps we are, but it depends how you take that “we.” Is it we who have fucked the planet and handed over power to bigoted forces? Or is it just some assholes amongst us who have played on the worst aspects of human nature for their own personal gain?

Elliot embraces that he does indeed hate people. He’s scared of them. Me too, buddy. I’m afraid of Americans. I’m afraid of the world. I’m afraid I can’t help it. But then he notes those rare people who won’t give up on him and harkens to them as a justification for the world.

But ultimately, I think I am on Whiterose’s side—and so is Elliot. The game she gives him to play after she kills herself (!) offers him a choice as to whether he will leave his friend, and he does. He might get to play again, but after that first time it’s game over.

This is the key choice, as Elliot seems to recognize the second time through: do you abandon your friend, or not? Because that was his whole argument to Whiterose about the value of this world: yeah, it sucks, but there are people who love me.

The game shows that his instincts are to the contrary. He knows that to win the game he has to leave the friend behind. And maybe this isn’t fair as a test on Whiterose’s part—maybe it isn’t fair in terms of the claim that she was giving him a choice—but it does get to something. Elliot’s initial response is to abandon the friend. Welcome to a new world!

(I presume the second time didn’t change things because Whiterose had really only given him enough time to play once. She hacks time, remember.)

It’s abstract, of course, and maybe something more concrete would have pushed him the other way from the get-go. What if it had been Angela? “A friend” seems pretty easy to put to the side. But maybe that is the point, also? Something about how shallowly we take the notion of friendship? Yet in the concrete instance when Elliot was faced with a similar question, he did indeed sit with his friend.

Turn Up the Radio

But then Elliot is thrown into a world where he seems to be happy, and about to marry Angela. His father is still alive, and loves him. Angela’s mother is alive, too, and maybe with Price if Elliot’s comment about her father liking to drink is supposed to indicate anything. This is the best of all possible worlds that Whiterose envisioned, where she is an out trans woman doing philanthropic work. (I’m not sure why her foundation would be called Whiterose, though, given that this name in the reality we’ve been used to seemed to come from the tragic death of her partner.)

Does he know what’s happened? Well, he has a headache. And he’s also apparently really into OK Go’s “Turn Up The Radio.” The lyrics here are interesting:

‘Cause now the world’s turned down—stop.
Fading all the bright on the “maybes” and the “mights”
And I should’ve known the hammer dropped
‘Cause something must be wrong when everything is right

So, too, is the video for Autograph’s song of the same name.

Of course, then the episode ends with Elliot coming home to find Elliot at his computer and asking who he is, so I have no idea where all of this is going. I figure the stuff about Mr. Robot, Magda, and the young Elliot will factor in somehow. Perhaps this world we’ve been thrown into is not real, but a construct in Elliot’s mind. But, then, when did it start? Is he dying as the nuclear reactor melts down, or has maybe everything been in his mind all along? I truly hope it’s not that, so I’m not sure at this point whether I want Mr. Robot to answer these questions in its final episodes, or leave them ambiguously open.