Casting in animated films is just as important as casting in live-action ones, but for different reasons. In a live-action picture, the actor is required to provide more than just a voice. They must have “the look” as well, though having “a name” doesn’t hurt either. There is a reason, fair or not, why Rhea Perlman and George Wendt aren’t headlining $200 million movies (sorry to pick on the Cheers folks).

Because this is a review for a kid’s movie, let’s forgo any discussions of the male gaze and sexism for the moment and just realize that, as a visual medium, live-action casting uses the voice as a supplementary, if not secondary, requirement and focuses more on looks and visual presentation. Unfortunately, animated films have focused more on the live-action format of casting when it comes to their productions as of late as well, eliminating career professionals that could boost the presentation in favor of “the name” and “the look”. The problem: most kids don’t even know “the names” and absolutely no one will see “the look”.

When I look back at the highly successful animated films of my youth, primarily from the ’80s and ’90s, the concept of casting an animated film was primarily based on voice talent alone, not the big draw. The Little Mermaid’s biggest “names” were the late Rene Auberjonois and Buddy Hackett. Jodi Benson, who voiced Ariel, became a Disney legend because of the film, not before it. An American Tail had Christopher Plummer, before his career renaissance, Dom DeLuise, and Madeline Kahn. The Land Before Time had Pat Hingle narrating. Jetsons: The Movie tried to sell tickets with just Tiffany as “the name”.

Animated films weren’t averse to adding a big name to the cast but it wasn’t their priority nor was it a requirement of every role. Up until Aladdin, when Disney betrayed the wishes of one of the world’s biggest stars, who preferred relative anonymity over his “name” to the story itself, the most star-studded animated film I could think of was Transformers: The Movie, which had Brat Pack star Judd Nelson, Leonard Nimoy, Robert Stack, and Orson Welles in his final film role (seriously). But even then, the producers of that film allowed the legendary Frank Welker (Megatron) and the iconic Peter Cullen (Optimus Prime) to voice their TV characters without being replaced by a bigger draw. 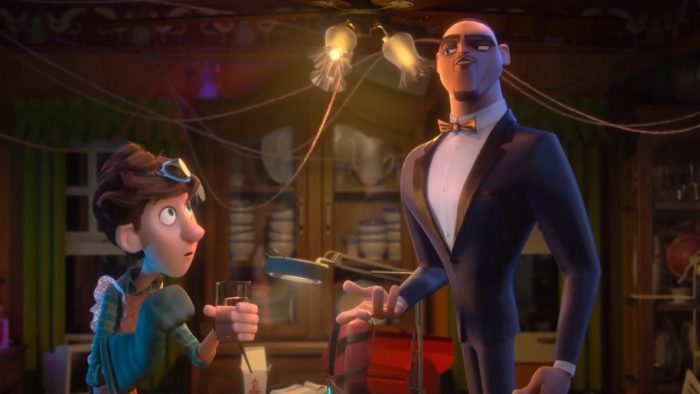 Spies in Disguise doesn’t verge away from the current Hollywood trend of casting big names in every animated role but it does feel like care was put into making sure the voices matched the character. Spies in Disguise, as a result, may indeed be one of the finest casted animated films in recent memory. For the first time in a long time, I wasn’t thinking “oh, that’s just Will Smith”. I was actually thinking it was Lance Sterling, the character Smith plays, up on screen. As someone who was forced to watch something like Trolls, a joyless, cynical cash grab in which maybe one or two of the cast actually fit their roles, an animated film like Spies in Disguise casting on talent first, and name second, is an incredible achievement.

It also doesn’t hurt that the story is fun too. And it certainly is a unique story at that. Based on an animated short called Pigeon Impossible, directed, written, and produced by Lucas Martell, Spies in Disguise follows international super-spy Lance Sterling (Smith), a James Bond-esque one-liner machine from “The Agency” who hardly breaks a sweat under duress, even when fighting an entire prefecture’s worth of Japanese yakuza on their turf. Sterling’s modus operandi is, “I fly solo”.

However, when the sinister Killian (Ben Mendelsohn), a master of disguise who also happens to have a robot arm, frames Sterling for the theft of the M-9 Assassin, a sophisticated drone weapon, Sterling finds himself on the run from The Agency’s lead investigator, the tenacious Marcy (Rashida Jones) and her team of tech specialists: Eyes (Karen Gillan) and Ears (DJ Khaled).

It appears Sterling’s only way to prove his innocence is to stop Killian and return the M-9 Assassin. His only help, however, is Agency “weirdo” Walter Beckett (Tom Holland), a tech specialist whose pacifist creations (such as glitter bombs) don’t fly well with the Agency’s more lethal preferences. But though the sheepish Walter is smart, his experiments have some wrinkles that need to be ironed out.

One of Walter’s boldest experiments, a “bio-dynamic concealment” formula, is meant to disguise a person in public but thanks to a misplaced bird feather in the mix, it turns whoever drinks it into a pigeon. Sterling, of course, accidentally drinks the formula and he must complete his mission not only as a pigeon with googly eyes and limited strength but without the ability to fly and an unwanted flock of pigeon admirers and friends who take to Sterling quickly. Hilarity ensues.

The plot of Spies in Disguise is, naturally, absurd. But it isn’t any less absurd than, say, a man creating a mech suit and fighting aliens from another planet. The key to selling an absurd story, especially an animated one, which will always be taken less seriously on its face by adults and “pure” cinema fans, is to treat it as realistically and honestly as possible.

This is most important for the adults in the audience. Spies in Disguise has all the lower-level humor kids love. Jokes involving bodily functions, pratfalls, embarrassment, and gross-out sight gags will always put a smile on a six-year-old kid’s face. But if these targeted jokes also carry with it sly adult humor and extra helpings of heart and originality then it can go a long way to crossing the aisle, so to speak, and appealing to adults.

Spies in Disguise accomplishes this on two fronts. Co-director Nick Bruno said [1], “We didn’t want to make this a spoof. We wanted to make this a legitimate spy movie that just happens to be animated.” They did this by adding such elements as “exotic international locales, dazzling cinematography, big action set pieces, futuristic gadgetry and a great score with a memorable theme”.

Bruno and co-director Troy Quane “revisited some of the most successful examples of the genre, to immerse themselves in the cool, stylized look and feel of them. They then imagined what would happen if they were to replace the heroes of those movies with a pigeon, and what they discovered was that the more grounded and cool the trappings were, the funnier it was with a pigeon in the center of it all”. 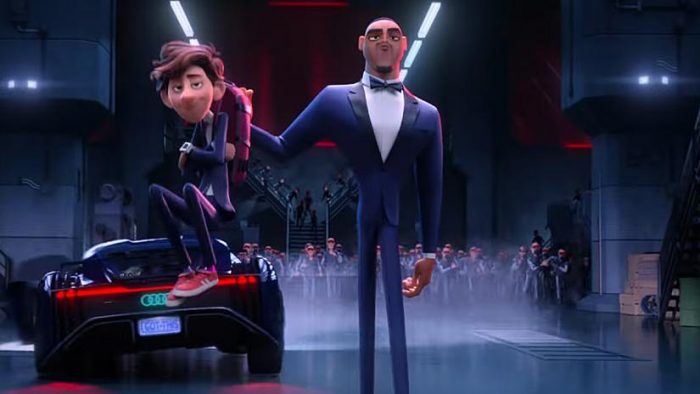 When craftsmen dedicate themselves to this kind of authenticity, it can be felt and appreciated on a deeper level. I saw the film with my ten and five-year-old girls. I am confident that while they laughed at a majority of the film’s more obvious jokes, as they should, I was impressed with how accurate the film was to the spy genre and appreciated the effort. This clearly wasn’t a hastily constructed feature but one of love and dedication.

And the other way the film appeals to adults and, in turn, positively adds to the experience with kids, is by not pulling punches with the drama. Killian is a fantastic villain for Spies in Disguise and not just because of the brilliant casting of Ben Mendelsohn, whose unique vocal register and cadence sends a chill down the spine of the audience, but because he is truly frightening. Killian actually kills people in this movie so, from the get-go, the stakes are high.

That’s not to say the film is necessarily too scary for kids. It does have some harrowing moments but, in the end, it is about a secret agent turning into a pigeon. You can’t get too dark with that! So if you are a parent out there, give this one a shot. It was made with tender, loving care and both kids and adults should like it, if not love it.

Spies in Disguise opens nationwide in the US on Christmas Day.