Gaspar Noe is a popular French creator (born to French and Argentinian parents, he now lives in Paris and directs French-language films) who has directed, to date, five feature-length films. He is widely recognised for his dark, disturbing themes, and his focus on violent imagery–which is often sexual in nature. For this evaluation his works Irreversible (2002), and Enter the Void (2009) will be carefully examined to establish what it is about these themes which allow him to tell his stories in such a powerful way.

The only logical place to begin is with a brief overview of the two particular works being discussed. Before 2002, Noe was relatively unknown and directed mostly commercials and music videos. After the release of Irreversible in 2002 he went on to direct five feature films to date, the most popular of which aside from Irreversible itself are Enter The Void (2009), and Climax (2018). All three of these films feature violence, sex, and distorted imagery in spades.

Irreversible tells the story of a woman (played by Monica Bellucci) who is raped in an underpass in Paris. It is told in reverse chronological order, which makes the storyline a little difficult on the first watch. It also means the scene we are left with at the end has the romantic feel we lack everywhere else. You don’t see Alex recover; you see what is taken from her. Robert Ebert, an American film critic, called Noe’s work here, “so violent and so cruel that most people will find it unwatchable”. It is violent throughout and displays scenes of extreme gore and sexual violence.

Similarly, Enter The Void is an extremely violent film. The opening scenes of the movie introduce us to this very early on, as we see a sexual scene in what appears to be a strip club, followed by a flurry of crazy colours and patterns in Noe’s representation of hallucinogenic imagery. The film tells the story of the drug-related death of Oscar, the protagonist, and what he sees after his death.

Through memorability, relatability, and shock, the stories Noe tells always stay with us long after we have viewed them, whatever we thought of them at the time. Gaspar Noe has always been known for using sexually explicit and violently jarring scenes in his work. The frequent use of the body as a visual stimulus to promote interest and relatability creates the illusion of rawness, despite the well-thought-out nature of all of Noe’s work. As you move towards his later work, notably 2018’s Climax and 2015’s Love, you begin to see a more deliberate use of the body to demonstrate the moods and themes of his films. Less obvious than the specifically sexual imagery throughout, we see continued use of the body in this way. While Love focuses very specifically on sexual imagery, Climax uses dance and hallucinogens to twist the human body into a storyteller.

As Noe uses the body to tell his stories visually, it makes sense that sex and violence play a vital role in that image. Pleasure and pain are two of the most natural things for the body to express, and when done correctly, this can be incredibly artistic. So is it the creative nature of this imagery that gives Noe such an edge over other directors? I would say there are three main factors in why Noe’s work has made such a name for him—memorability, relatability, and shock. Using the body as a storyteller creates an intimacy between the screen and ourselves, allowing us to immerse ourselves fully in what we see as if we were really there. I will now talk you through why I believe those three factors are what really allow Noe’s work to stand out. 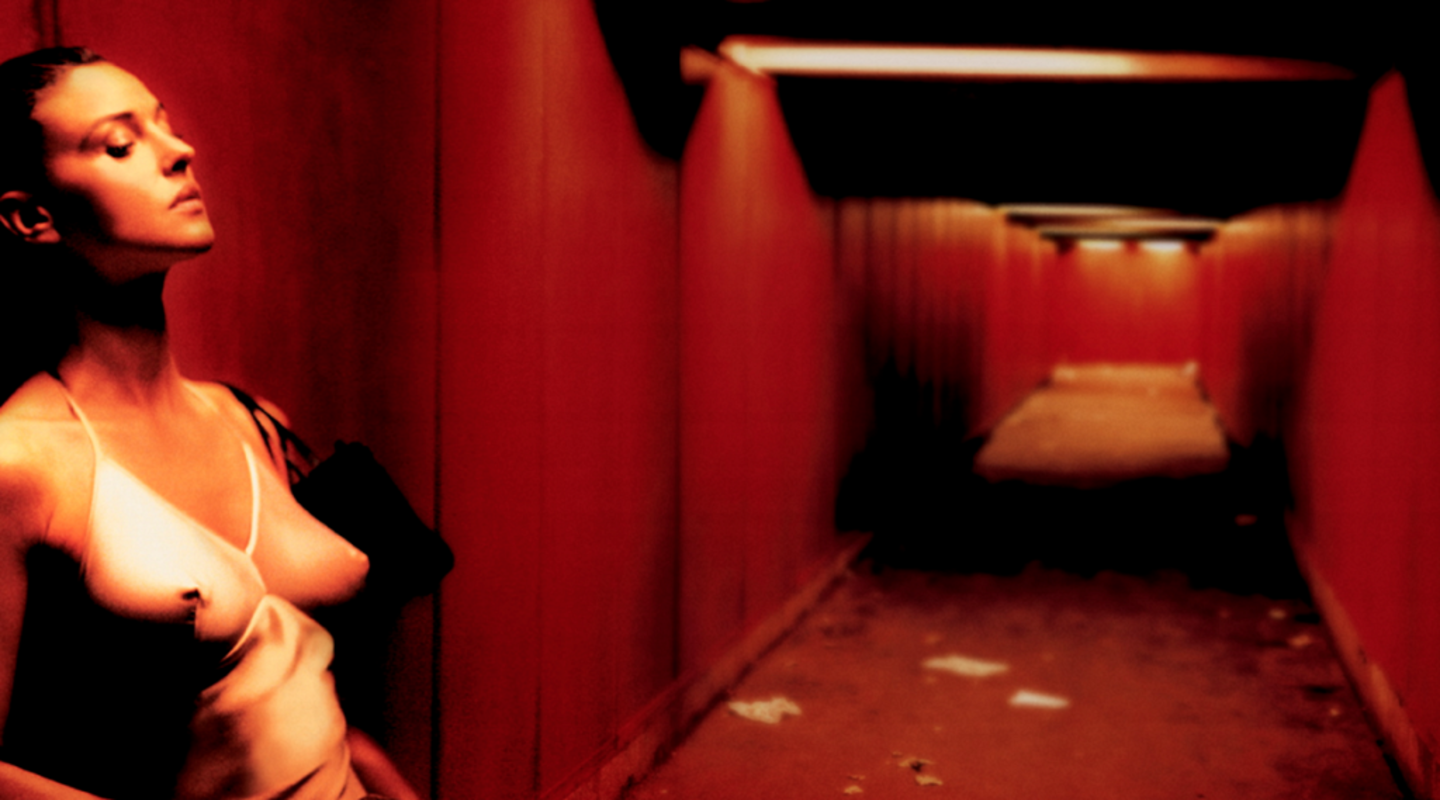 Memorability is a crucial part of the success of any movie. Things that shock us and things that we can empathise or relate with are likely to stay with us for a much longer period of time than things we cannot relate to and those which do not provoke a strong emotional reaction. In Irreversible, the rape scene midway through is not only memorable purely for its content, but also for its length. The ten-minute single shot shows explicit violence as if aiming to provoke a particular reaction from us. However, Noe moves entirely away from depictions of rape as we usually see them—romanticised, unnecessarily energetic, brief—and more into the unflinching reality of endurance and terror. This is much more memorable than the former and raises questions within ourselves that perhaps before we would not have considered.

The relatability of Noe’s work

We all have a body. Seeing a story told by its effects on the character’s bodies allows us to relate directly to what we are viewing. Using nudity and sex to tell a tale makes it all the more engaging. This is for several reasons; we can all imagine a touch on our own skin when we see it on the screen, no matter our individual response to sex we all innately see it as a significant action, and we can all relate to the contortions and movement of a body as if it were our own—be it for pleasure or pain.  Noe’s use of the pain and pleasure his characters experience, knowing we are able to imagine how this feels and squirm at the thought. This humanistic feel of many of Noe’s scenes prevents us from feeling too far removed from the horrific plots of the stories he tells.

In the famous underpass scene where Alex is raped, we see a passer-by taking a different route without getting involved. But the audience is not offered a chance to shy away. She consistently screams brokenly, and the pain in her voice detracts any possible romanticisation of this scene. There is no room for misinterpretation. Our focus is never on his pleasure, but on her pain.

Enter The Void goes a little further on this point. The fact that we are focused on a story that exists because of the death of the protagonist plays into our own curiosity and fear of mortality. Seeing this particular suggestion of a consciousness that extends beyond our last breath in such an abstract and confusing way feels like a puzzle; we can not stop thinking about the film until we feel we have solved it. Telling stories this way plays into the memorability of the flesh, and the poignancy of how well we can imagine the stimuli on our own bodies.

The shock factor is the third most crucial element Noe uses. Gaspar Noe is all about the shock factor, but not in the lazy way that jump scares shock us. Very early on in Irreversible, we are exposed to scenes skipping between different sexual images of men. There are homophobic slurs followed by a man being bludgeoned violently to death with a fire extinguisher. Throughout both of these phases, the camera angles are jilted and jarring—we can’t look away for fear of what we might miss. Noe is set apart from other directors by his ability to use shock not for the sake of shock itself, but simply as a byproduct of the intense stories he wishes to tell.

Even now there are scenes in both Irreversible and Enter The Void that have not been replicated since. The most poignant example from each would without question be Irreversible’s drawn-out rape scene, and Enter The Void’s scene depicting Oscar’s death. This scene is perhaps even more significant now than when the film was released, due to the spotlight that is now shone on institutionalised violence in the police force. Both of these scenes call into question the humanity of the characters, as well as the humanity of the director, audience, and people as a species. To see this in such a way seems dissociated from ourselves, yet when you realise that these events frequently occur in the real world this only serves to add to the sense of shock and dread that you feel. The disturbing nature of both of these scenes radiates far beyond their use as a plot device.

Weaving together these three key components, in both films, contribute to the unflinching view of violence and sexuality that Noe portrays. His willingness to show violent acts in their brutality explains the fascination of his audiences, as they simply cannot look away. The starkness in his direction is still very far away from the mainstream treatment of violence, and this new outlook provides an ongoing tension throughout his films, which ensures his viewers are consistently entertained (if a little terrified). His stories are real, portraying things we often choose to ignore or think little of; we are forced to be introspective about sex, drug use, violence, and relationships. I don’t believe this is why Noe chooses to tell his stories in this way. His will seems to involve telling stories this way for his own pleasure, and his personal challenge of our willingness to pursue and observe violence without flinching. His unique need to tell stories in their rawest form is brave and bold, and we should all embrace the opportunity to engage with important themes in the way he is offering. It’s not just the display of bodies; it’s the lighting, the angles, the colours, and the philosophy. Noe gives us a way of viewing the body we have seldom seen before.