I can’t say that I’ve seen many prison movies in my lifetime. I saw Escape From Alcatraz (with Clint Eastwood) when I was a kid, and that was about it. I was intrigued by the premise of the TV show Prison Break, but I’ve never seen an episode. They break out of prison, right? And then they get sent back…and break out again? I’ve always thought that any movie that takes place in a prison must be pretty depressing. The cast would be filled with muscular, macho dudes with lots of tattoos, and there would be the power-hungry warden and snotty guards and the prerequisite sexual assault in the shower stall. But as of late, I’ve been making a concerted effort to expose myself to new things.

So behold! I watched Brute Force, featuring Burt Lancaster (of From Here To Eternity fame) and Hume Cronyn (who gained popularity later in his life as one of the senior citizens in the Cocoon films). Brute Force is a big, fat, gritty prison drama. It’s claustrophobic and intense. But did it fulfill my innermost desire to experience the Big Jailhouse Movie I’ve been missing all of my life? Read on…

Brute Force belongs to the noir family of crime films. The tone is bleak and foreboding, with grim consequences around every corner. This movie makes prison look like an absolutely awful place to be. I’m sure that prison really is quite bad, but I’d like to think it’s not as horrible as Westgate Prison is depicted in this film. Do guards really plant shivs on inmates to get them in trouble? Do they really serve gruel at chow time? The jailhouse doctor is almost always drunk. In fact, the staff generally seems like they want to be there even less than the convicts do. Everyone is just so unremittingly unhappy.

The only people that seem to want to be at Westgate are Warden Barnes (Roman Bohnen) and Captain Munsey (Cronyn), the chief of security. These two characters and their opposing viewpoints instigate much of the action in the film. Barnes believes in trying to rehabilitate the inmates, while Munsey is a sadist who thinks that severe discipline is the only legitimate course of action to take in the environment. On the other side of things, inmate Joe Collins (the dashing Lancaster) has had to deal with Munsey’s corruption and cruelty for a long time and has reached his breaking point. Once Collins discovers that his wife Ruth won’t have a lifesaving operation to cure her cancer unless he is by her side (I don’t understand the sense behind this, but whatever), he formulates a plan to escape from Westgate. He draws a bunch of his fellow inmates into his escape plan, and the movie barrels to its conclusion as we follow the breakout to its fruition. 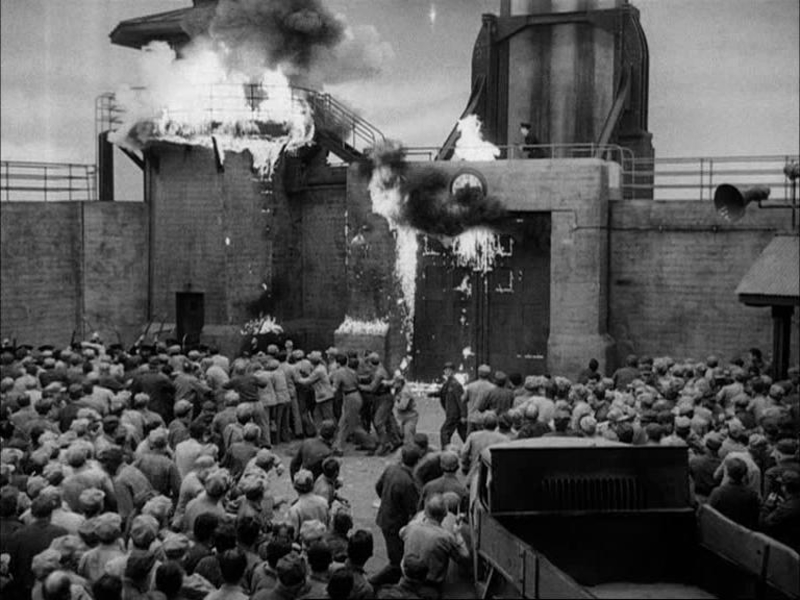 Interspersed between the melodrama and action at the jailhouse are LOST-style flashbacks to the inmates’ lives before landing in prison. These brief vignettes provide a welcome respite from the unrelenting luridness of the penitentiary scenes. We get a glimpse of the crimes that put them inside. Surprisingly, the main characters’ crimes are not very gruesome (they locked poor Tom away for years for stealing $3,000). One of the inmates didn’t even commit the murder he was jailed for—he simply took the blame to protect a woman.

Throughout the film, the prisoners project their fantasies onto a beautiful model posing on a calendar that hangs in their cell. This cover girl becomes the embodiment of every woman they have lost in being sent to jail. It’s sad to think that most of these men don’t even have actual pictures of their loved ones and are forced to resort to this transference.

And I would be remiss if I didn’t mention the staple of every prison movie, even to this day: the jailhouse snitch. Brute Force has a few of them, and they incur the wrath of the angry men they have betrayed. In an early scene, one of these informants gets backed into a giant machine press by his fellow prisoners; another gets tied to the front of a mining cart and used as a human shield during the movie’s finale. 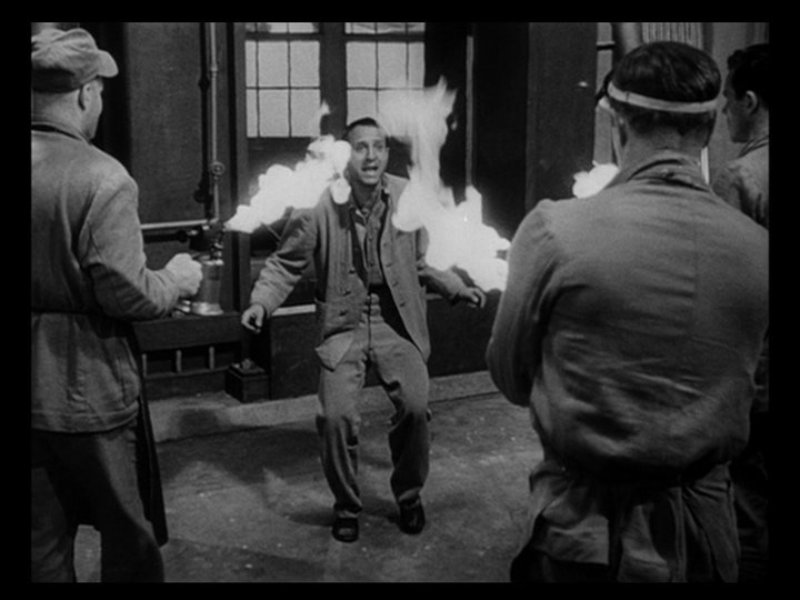 Brute Force features some pretty brutal violence, especially considering the era in which the film was made. While some of the fight scenes are a bit dated and laughable when compared to those in modern cinema, this does not distract from the overall grisly atmosphere. In particular, the big escape scene at the end spotlights a bevy of horrible deaths. I admit that I was not expecting this degree of bloodshed in a film from the 1940s.

This wouldn’t be a noir film without a downer ending. The sadistic tyrant Captain Munsey gets thrown off the prison tower to his death, but it’s a Pyrrhic victory for the inmates due to the inability of anyone to actually escape during the jailbreak. When all is said and done, the convicts are no better off than they were at the start of the movie. They have eliminated the evil Munsey, but who’s to say that another, equally vicious disciplinarian won’t take his place? The film leaves you with a lot to think about. Was it even all worth it in the end?

Brute Force tells a compelling story, but I struggle to see the grand meaning of it all. Is it trying to tell us something about the ethical treatment of prisoners? If so, I’d say it was already pretty obvious to me before I watched the movie that treating inmates in a humane manner always bests treating them like garbage. Or is it trying to tell us that prison is hell, and that any attempt to find equanimity behind bars is futile? My pick is the latter. This would be an excellent movie to show young children to imprint on their brains that crime doesn’t pay. Prison is sometimes glamorized in modern television and cinema (sometimes it looks like it would be good fun to hang out with the gals in Orange Is the New Black). But Brute Force will hammer home the message to children that you’d better straighten up and fly right, or else you get thrown in a cramped cell with 20 other men, and guards will torment you and plant shivs on you until they drive you to a foolhardy escape attempt that ends in death. Well, regardless of what the movie’s message is, the story is extremely compelling, and I’d watch this film again in a heartbeat. I would just never want to be in that scenario.

Brute Force excels in conveying the hopelessness of the jailed men. These men sit alone in their cells for days upon weeks upon months and years, dreaming of the lives they’ve left behind. Their only contact with the outside world is the periodic visits from their loved ones that they must conduct through a chainlink fence. Some of them receive occasional letters from home, and some don’t. And even when they did receive their mail, I couldn’t help but imagine the agony of writing to a loved one and having to wait weeks for a response. My, how things have changed since 1947, when this movie came out. Now, most modern prisoners have the benefit of technology to communicate with the folks back home—founded in 2002, the JPay company enables inmates to email and even have video visitation with their families. 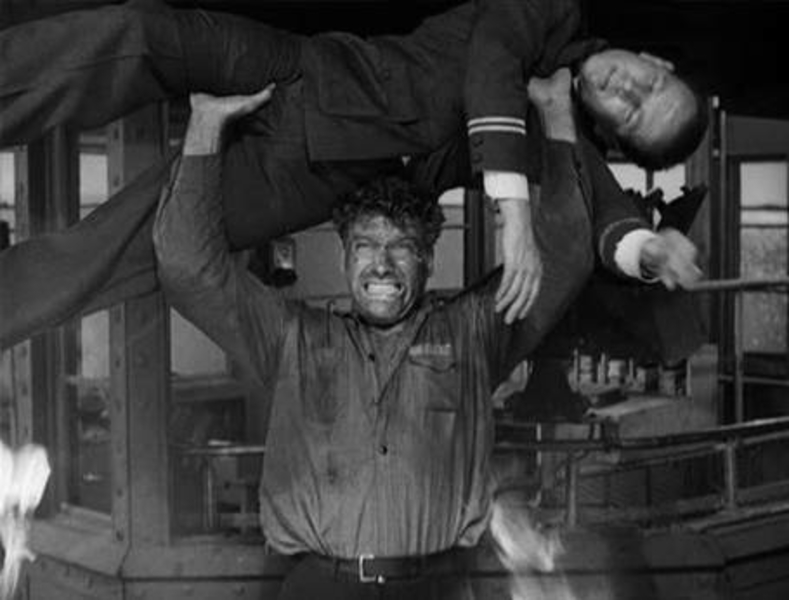 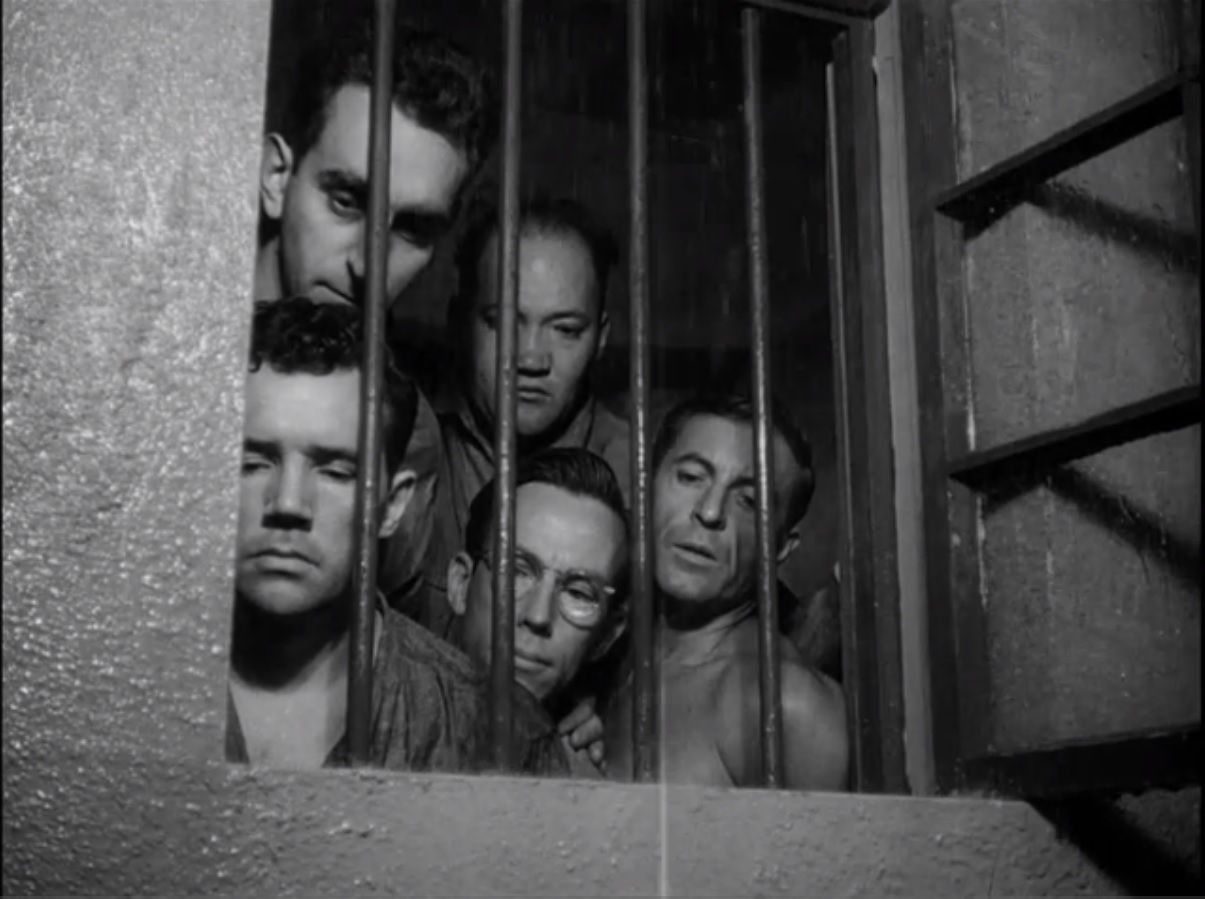 Brute Force is available on DVD from Criterion and is currently streaming on the Criterion Channel.