Ugh, another year has arrived. Some of you may be full of excitement and wonder. Others might be clinging on to the very last thread of hope that humanity and goodness will prevail and the world will become a more beautiful place again. For those of you in that latter category especially, I bring you 12 tunes that I hope will inspire you to stick two fingers up at the haters and remind you to love yourself. You are pretty awesome, after all. Yes you are.

Of course, you may hate my taste in music—one woman’s treasure is another woman’s trash after all—but in the very least take away the sentiment from these tracks.

This great tune from Tirzah and Micachu is already almost seven years old, but it’s highly underrated and underplayed in my opinion. So shimmy your way into 2020 with this banger.

Tirzah’s debut album Devotion was released in August 2018 on Domino Records, and it is a gorgeous blend of experimental R&B and soulful lyrics, her voice is like silk. This album will put you in your comfort zone.

“If someone talked to you, the way you do to you, I’d put their teeth through. Love yourself”

Of course IDLES were always going to be on my list. They’ve been the top of my playlist for two years now, and without sounding too pretentious, I can honestly say their music has helped me survive. With that in mind, I shove it down the throats of everyone I know that might also need to be dragged up to their feet. Sorry about that. As with all IDLES songs, the message is powerful and humbling here in “Television”: be yourself and love yourself as that’s the person other people love too.

“Television” is from the album Joy as an Act of Resistance and has recently been released on their new live album A Beautiful Thing, live at Le Bataclan, both on Partisan Records. Take it away, boys.

“I believe in something better”

Fat White Family released the tremendous album, Serfs Up! in 2019 on Domino Records. It’s jam-packed with excellent tunes, but it’s “I Believe in Something Better” that I’m choosing for this playlist. It’s like Throbbing Gristle on MDMA. A track so uplifting, yet perilously dark. 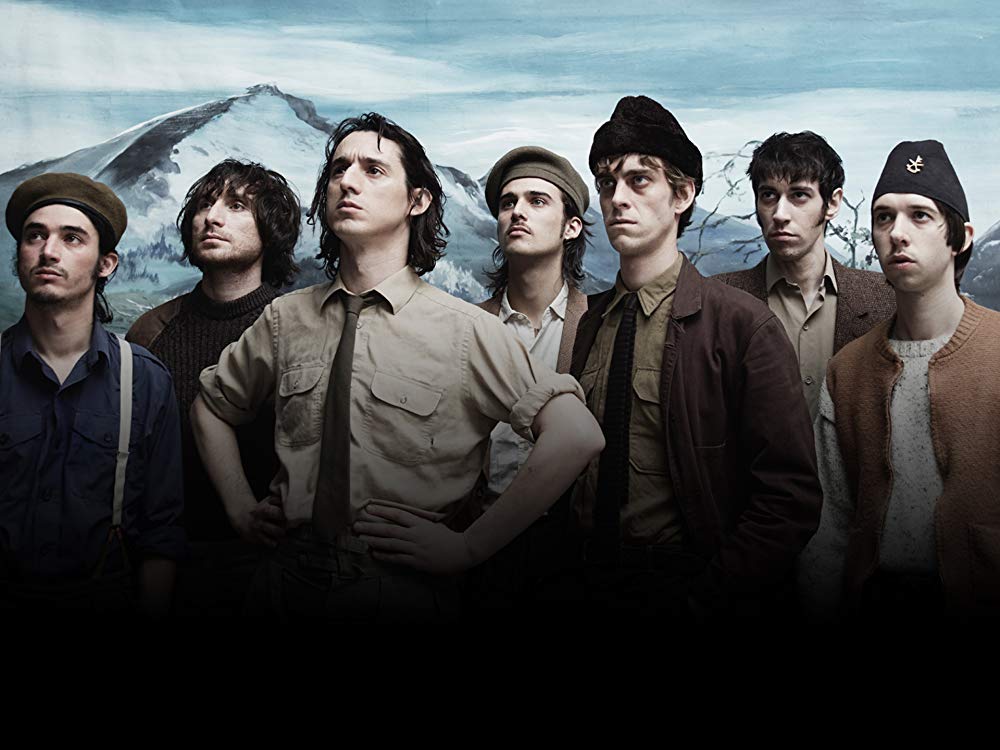 Yeah, yeah. I know all that “New Year, New Me” stuff is a load of bull. You can only go teetotal and live off lettuce for so long before you want to kill everyone and everything. I would recommend listening to the chilled groove of Beak> in this instance. The second Bristol band on my list already (IDLES being the other), Beak> were formed back in 2009 by Geoff Barrow of Portishead fame, plus Billy Fuller and Will Young. “Brean Down” is a snake charmer of a tune, and the video is hypnotising too. The track is taken off the third album >>> from Invada Records.

“I’d give you anything, at anytime, but you let my tyres down”

I have no clue if this track is about getting rid of toxic people from your life, but I’d like to think it is. Tropical F*ck Storm are an Australian band formed by Gareth Liddiard and Fiona Kitschin after taking a hiatus from the art-punk psych band The Drones. They have toured with Band of Horses and King Gizzard & The Lizard Wizard, and released their debut album A Laughing Death in Meatspace, in March of 2018 on Joyful Noise Recordings.

The debut dive-bombs into the realms of mortality and immortality, moralising and amorality, the passing of time, and how little we have left. But don’t let that get you down. Embrace it. And kick those that let your tyres down to the kerb.

“These snowflakes fall in all sizes and shapes, exquisite designs, they cover alpines and lakes”

Like the IDLES lyric, “This snowflake’s an avalanche” on “I’m Scum,” DJ Shadow feat. Inspectah Deck, Ghostface Killah and Raekwon from the Wu-Tang Clan also use the metaphor on “Rain on Snow” to tell the hypocritical right-wingers that “snowflake” is no insult. At the same time, they cry over anyone dissing their orange dictator. This excellent track is my favourite from DJ Shadow’s new album, Our Pathetic Age on Mass Appeal Records.

“He could not break me”

Black Midi came storming out of nowhere in 2019 with their debut album Schlagenheim—an experimental rock triumph. It makes me wonder just how good these kids can get if this is their first offering—there really is nothing else quite like their sound. Like marmite though, you’ll either love them or hate them. When it comes to the tour de force that is “Ducter” I’m just mesmerised, to be honest. Sometimes I try to singalong with Geordie Greep’s lyrics which must be quite ridiculous to witness, especially at those peak “he could not break mearghgghhhwwweeeayayayahhh!” moments.

I love Viagra Boys. That might sound like a too-honest admission, but it’s true. They are a five-piece band from Stockholm, with one album, Street Worms, on YEAR0001 Records, under their belt so far. It features the track “Sports” which I can’t stop listening to. It reminds me of the Revolting Cocks’ cover of “Do You Think I’m Sexy?”, but it’s about sports and getting high with your friends and buying things on the internet—my kind of sports. Playing this track while playing your fantasy leagues will make you win. Fact. Tattooist by day frontman Sebastian Murphy’s ruptured voice sounds like a bastard child of Butthole Surfers and Dead Kennedys, making this one of my favourite post-punk bands of the moment.

“And I don’t care about the things I have, I got you”

Amyl and The Sniffers are the second band from Australia on my list. Frontwoman, Amy Taylor, sports a peroxide blonde mullet and I think that might be why I like them. Honestly, they are nothing new—they are a punk quartet that romanticises the dirtbag 1970s to a cartoonish degree. But there’s no denying that they are fun and energetic and now that they’ve signed to Rough Trade Records they’ll probably go far.

BC Camplight’s second album on Bella Union Records, Deportation Blues, is a dynamic document of calamity and stress, relayed through richly melodic and bold arrangements spanning singer-songwriter classicism, gnarly synth-pop, ‘50s rock’n’roll and various junctures between. “I’m Desperate” embodies all of that in an almost Meatloafesque way, which should mean that I hate it, but I don’t.

New York’s Parquet Courts really hit their stride with their sixth album Wide Awake! released in 2018 on Rough Trade Records. With more than a likeness of Elvis Costello both in style and the sound of Andrew Savage’s vocals, especially on this track, “Freebird II” is a great indie-rock anthem, which in my mind would fit perfectly in an Irish bar in Brooklyn on NYE.

And finally, I am going to slow things down a little now as the end of the night in my imaginary New Year’s Eve party. Julia Holter’s “I Shall Love 2” from her 2018 album Aviary on Domino Records, is so gorgeous, it starts with a tinkly, childlike magical dreamscape. Then it sweeps and transcends into a crescendo of strings and layered vocals. Holter takes a simple concept—the overwhelming and universal nature of love—and treats it in a way that almost feels like an alien’s view of the concept, talking and singing through these questions and declarations of love as if it is the first time she is experiencing them. It’s a song that totally encompasses those first feelings of love—you can’t think of anything else, you are almost beaten to submission with emotion. Isn’t that just the best?

So there we are—12 songs to take you fighting into 2020 on a positive note. Please let me know your recommendations in the comments or on social media; I am always eager to hear new music.

Happy New Year to you all.