The most common phrase I’ve heard uttered around the release of The Gentlemen is “Guy Ritchie is back.” I don’t know that he ever left. As the only critic in human history who liked King Arthur: Legend of the Sword, I’ve always felt Ritchie’s honest cinematic voice imbues any film he touches with a certain type of magic. And when he returns to the British crime underworld, that magic is indefatigable and undefeated.

Just like with Snatch and RockNRolla, Ritchie introduces us to a new section of the dregs of British society in The Gentlemen. This time the focus is the “bush” game (or marijuana for the uninitiated) run by American ex-pat Mickey Pearson (Matthew McConaughey) and his right-hand local man, the dapper Ray (Charlie Hunnam). Mickey is looking to get out of the criminal lifestyle but first, he must find a buyer for his lucrative, but secretive, business. 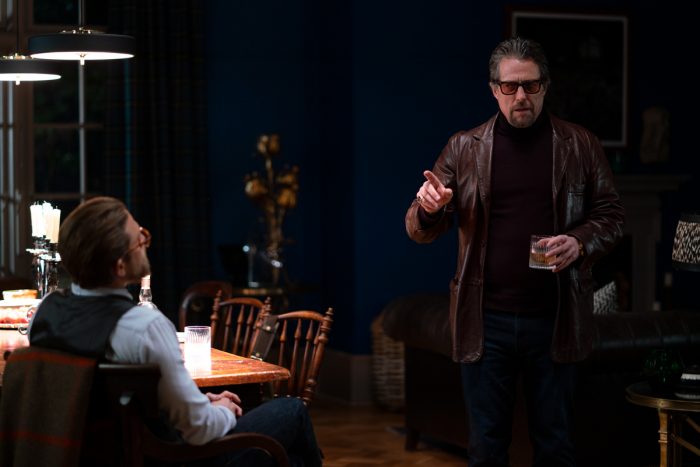 The key to making a “cool” movie is to have confidence; confidence in both style and substance. When a movie rings true, the audience can feel it. The Gentlemen, from its opening sequence of mysterious bloodshed to its Bond-like title sequence, all the way to its near-Comedy of Errors climax, exudes that confidence. This is why Guy Ritchie, even after a couple of box office bombs or bizarre narrative sidetracks, still makes movies. The Gentlemen is confidence made celluloid.

Of course, casting is the key because a highly stylized script and style can be torpedoed with the wrong actors delivering the lines and personifying that aforementioned confident coolness. The Gentlemen, like many great Ritchie crime films, boasts an impressive cast who are up to the challenge. Leading the way is Oscar winner McConaughey as Pearson, who exudes that quiet spirit of power that you see in those Lincoln commercials. It is hard to tell if McConaughey is acting or just being himself but, regardless, it suits the film perfectly.

Stealing the show is Hugh Grant as slimy PI Fletcher, in what is arguably his best performance as an actor. I know many swear by his “Nervous Hugh” days (think Sense and Sensibility or Notting Hill) and also his marginally sinister “Cocky Hugh” days (think About A Boy or Bridget Jones’ Diary), but The Gentlemen offers Grant a new lease on life outside of any stereotyping. As Grant himself said in a special advanced screening Q&A, and I paraphrase, “I’ve never played anyone so vile.” His high pitched, cockney accent and openly salacious behavior is delicious to watch, despite how gross it made the actor feel.

Michelle Dockery, of Downton Abbey fame, gets to do some stereotype-busting of her own as Mickey’s sexy, independent wife, Rosalind. Sure, Lady Mary was kind of nasty in Downton, but to see Dockery kick ass and take names, all while wearing some amazing pumps, is quite the experience. Rounding out the cast are the ever-reliable talents of Colin Farrell, as a very Ritchian sports coach/mini-gangster appropriately named, simply, Coach, Jeremy Strong, a Jewish billionaire who is favored to buy Mickeys’ weed business, Hunnam as Ray (who is guaranteed to make most of the women, and some of the men, in the audience swoon), and Eddie Marsan as the head of a tabloid newspaper with malicious intentions. 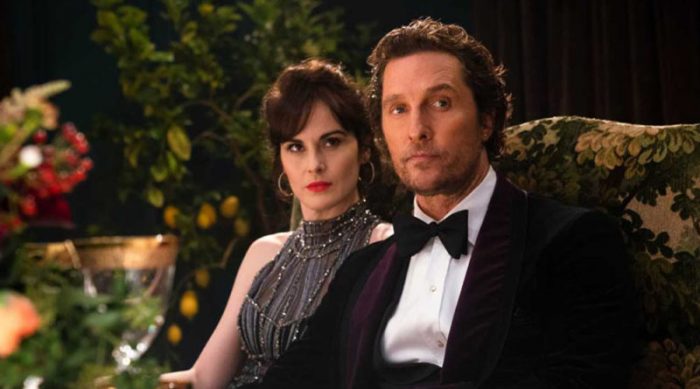 Coupled with the casting, the script is also top-notch, weaving in and out of unpredictable plot machinations and increasingly outrageous set-pieces. When Ritchie is in his groove, nothing can beat his distinctive dialogue patter or his beautifully vulgar slang. Those who are perturbed by the C-word may want to cover their ears quite often during the running time. But vulgarity doesn’t necessarily translate to tastelessness and The Gentlemen lives up to its tag line of “Criminal. Class.”

Despite the January release date, and some back-handed compliments from other critics, The Gentlemen is worth your time this coming weekend. With a delightful cast, compelling screenplay, and an unbeatable cool factor, The Gentlemen currently, and likely only for a brief time, holds the title for 2020’s best film so far.

The Gentlemen has already been released in the UK, Ireland, and Australia. Its nationwide release in the United States is January 24th, 2020.