Set in the 18th century, Marianne (Noémie Herlant), a painter is hired to paint a portrait of Héloïse (Adèle Haenel), a portrait to be sent to her future husband in Milan. One is usually expected to sit and pose for a portrait, but she refuses to do so and is understandably not keen on the idea of marriage. The previous painter attempting the portrait has never even had a chance to see her face. Héloïse’s mother advises Marianne to pose as a companion for Héloïse’s walks on the island. The mission is clear—to study the mannerism, contours of her face, so she can reproduce her likeness on the canvas without any reference.

Almost the whole film takes place at an isolated island, free from the grasp of men, from the patriarchy. Seemingly. Every character’s life in the film is linked to a man, albeit an off-screen one. The grasp of the patriarchy is ever-present in the 18th century. Héloïse’s is life is waiting off to be married off, Marianne’s life is as a painter is determined by her father, who’s living and workshop she would inherit. Their lives are set. Never to be changed. The only change they encounter is on this isolated island. Any seeming autonomy the women have is an illusion. The affair is only possible on the basis of the isolation of where they reside. The island is a little bubble where anything goes. Where norms can be broken. To a certain extent.

Céline Sciamma begs a question—is there such a thing as love at first sight? Some scientists would have surely blamed it on some chemicals in our brains and disregard it as baloney. You can’t really know someone from first sight and love them. Isn’t love at first sight just a first invite for curiosity? To get to know the person better? Romantic love is about being seen, heard and understood. Marianne and especially Héloïse are two souls who find this understanding in each other. Romantic love at first is studying one another—which is what the two characters end up doing over the course of the film. One poses, the other studies. If you have to study law, you better fall in love with it, right? To fall for someone is to see them, completely. And seeing is connected with time, precision and determination. You can’t understand a person after the first conversation. This discovery and attempt begins with the first sight (first impression, if you will). The falling in love begins with the first sight.

Every gaze increases in intensity. At first, it is studying an object, and its peculiarities (the way one folds their hands). As Marianne gains the opportunity to study Héloïse, the audience studies it as well. It might seem one-sided at first. But Héloïse studies Marianne as well.

Every single frame if frozen and put on a wall would make a fine painting. The cinematographer Claire Mathon frames every image as if one looks at a work of art in a gallery. Clearly to represent what the characters see when they gaze upon each other.

The story of Orpheus, losing his love Eurydice, when leading her out of the underworld serves as the main framework for the affair. Orpheus disobeys the command to not look at his love before their escape is completed. Someone says his name or maybe it is an illusion and he turns back. What if Eurydice says his name so he can keep her memory? What if Orpheus chose to turn for the same reason. Both Héloïse and Marianne know that their love is doomed and nearing its end and with certainty choose their last sights. 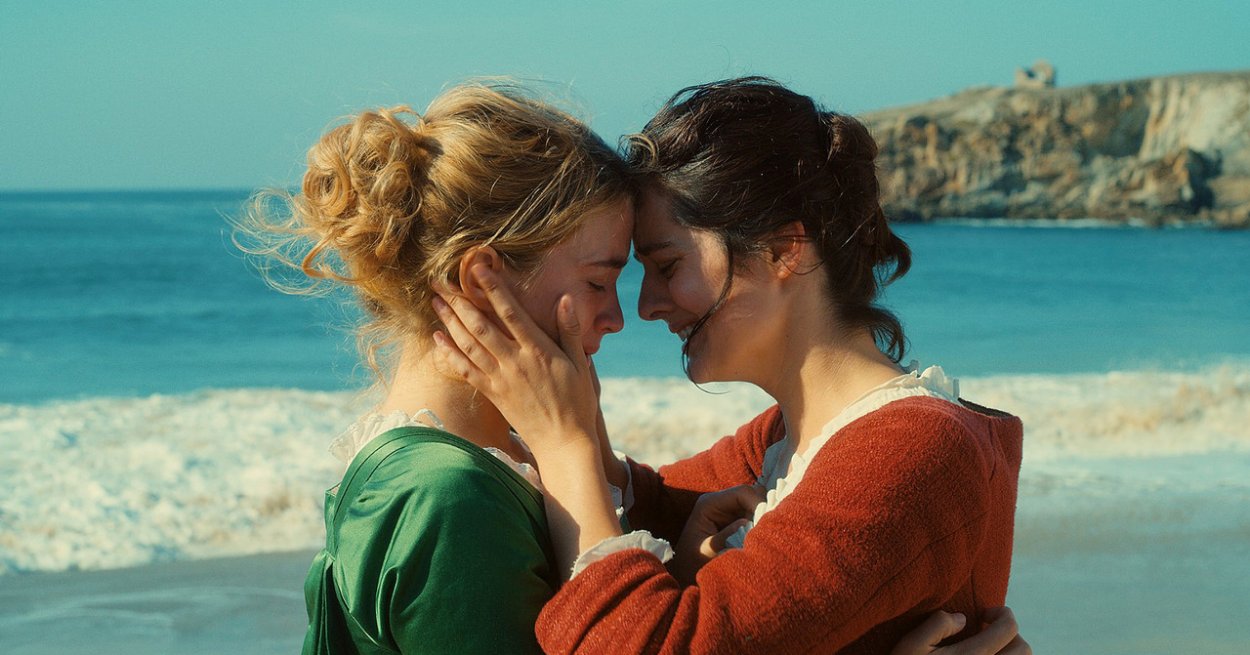 Music plays a large role in the narrative. Héloïse only knows organ music and just like any lover, Marianne introduces her to things she doesn’t know. And plays her a little bit of piano music.

The very last shot of the film is when you get to watch someone for the last time accompanied by something, a piece of culture in this case, which the other person loves. The bittersweet pain and memory. The longing. Remembering the last glance. Meanwhile Vivaldi bursts on with his orchestra.

Portrait of a Lady on Fire is possibly the most romantic love story/movie in years. It captures the entire love affair since its inception—the first sight—’til its doomed end—he last glance. It is a tender and heartbreaking look at love.