Few films use aesthetic appeal to get their symbolism across, especially in the horror industry. Unless it’s an arthouse film, horror relies on slash and gore to stir audiences into a frenzy. While the endings of these films do their job leaving the audience with a sense of dread, the depth of their content leaves much to be desired. The average horror film shakes up filmgoers but doesn’t leave them with much artistic criticism to contemplate.

Some horror film production studios are known for their “high brow” horror such as A24 with their films Hereditary (2018) and The VVitch: A New England Folktale (2015). Hereditary and The VVitch cause the audience to contemplate the deeper meaning of the symbols in the film but, while their films are aesthetically pleasing, their ability to visually stand out from the crowd only goes so far.

There are few subgenres that are as aesthetically pleasing as giallo. Giallo is an Italian horror subgenre that prioritizes symbolic, aesthetic beauty over the intricacies of the plot that other films shift the majority of their focus away from. While the story itself is simple in a giallo film, the lighting, camera angles and gore are anything but. Even more, the most fascinating aspect of this subgenre is the inherent symbolism featured. There are common depictions that the subgenre uses to its advantage, doubling as a beautiful film technique as well as a symbolic trope.

Giallo is most known for its dramatic use of color in film, cryptic camera angles, and murder mystery with a killer who wears black gloves and wields a knife. Classic giallo films like Inferno (1980), Blood & Black Lace (1964), Knife + Heart (2018), Opera (1987), and Phenomena (1985) are grand examples of how giallo blends aesthetics and symbolism into a deliciously layered film experience. Here are five common aesthetic tropes found in giallo.

One thing you’ll notice right away about a giallo film is its fantastic use of color, especially in the lighting. In the film Inferno, Dario Argento uses magenta and blue lights to turn whole sections of the screen these alternating colors. It’s interesting to watch them undulate from scene to scene, from frame to frame. Color lighting works subconsciously with our moods and it’s very apparent that Argento is trying to get us more emotionally involved in his stories with excellent visual storytelling techniques. In the film Blood and Black Lace, Mario Bava uses the color red as a foreshadowing tool to subconsciously warn the audience for blood and terror.

Black gloves are very common in giallo films. They are so common that all of the films I listed above have the camera zoomed in on a murderer’s hands obscured by black leather gloves. This is both an aesthetic choice as well as a thematic and practical one—practical in the sense that it’s easier for the murderer to remain a mystery when you can’t find their handprint and don’t even know what their hands look like. Another aspect of this trope is the covering of the villain’s face, typically with a mask. In one scene of Blood and Black Lace, the villain wears a mask to cover their face. In the end, the killer takes off their mask, but during the film, you see the killer’s entire body in full-frame but you don’t know who they are. 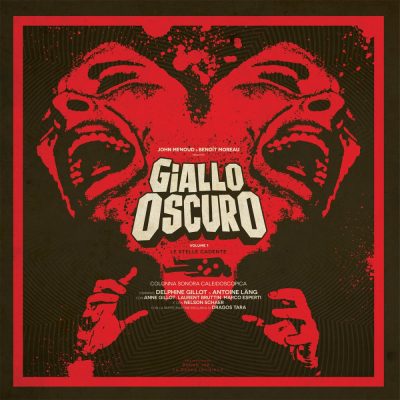 In the beginning of Dario Argento’s Opera, the camera focuses on a raven’s eye to the degree that the audience can only see reflections in the bird’s eye. The resulting image is a distorted, gray and dismal fish eye lens perspective. Other camera angles feature wide-angle shots or establishing shots from overhead that give the audience the hapless frustration of watching a killer perform his or her dastardly deed from afar. A tilted camera angle gives the audience an overall feeling of unease, or the camera will focus on one particular object while violence ensues off-screen. The latter is most effective in garnering suspense, but it also casts the villain into deeper mystery.

5) The Power of Women

It’s interesting to note how many women there are in horror films as a general rule. Most of the main leads of horror films that people tend to remember that aren’t the villains are heroines like Laurie Strode from the Halloween franchise or Ellen Ripley from Alien. Giallo places a lot of emphasis on females as well, especially in the film Blood and Black Lace that focuses on women in the fashion industry and how they can be as petty as they are dangerous. In Dario Argento’s Phenomena, the protagonist Jennifer Corvino has a supernatural power that gives her the ability to help solve murders throughout the film. Knife + Heart also focuses on a female protagonist who is a cunning and industrious business owner.

The average horror film is gory and grotesque with little to no deeper implications or artisanship. This makes sense when you realize horror budgets are notoriously low. In recent years, many have improved their dedication to making art-house horror films. There are fantastic horror films that utilize cinematic techniques for a unique flavor to express the director’s brand and vision, but giallo encapsulates the possibilities of beauty in horror. Whether it’s a brilliantly lit set, double entendre knives, or an eerie camera angle, giallo opens gorgeous doors into the flights of the macabre imagination.