Definition of a scientist: a man who understood nothing until there was nothing left to understand.

It is the dreaded year 1977. War has hit Earth, but instead of lands ravaged by fire and brimstone, germs have ruled the day, killing everyone and leaving entire cities empty. Due to a man-made plague, no one is left to roam the trash-filled streets with the exception of one man… the last man on earth… Colonel Neville (Charlton Heston), a scientist who has found the cure for the deadly outbreak but has no one to give it to. For the day is without a living/breathing soul and the night is left to the husks of humanity who feed on fear like vampires.

Thus the premise of 1971’s brilliant dystopian thriller The Ωmega Man, which had been made before (as The Last Man on Earth) and would be made again (as I Am Legend). And it is worthy of retelling again and again as its message of technological obsession becomes more and more relevant as we enter the third decade of the 21st century. For our downfall as humans might not be from without with bombs but from within as our own DNA betrays us due to the conquering of nature.

The Ωmega Man isn’t a subtle film. In fact, of the two films we are discussing today, it is surely the goofiest. But its goofiness doesn’t supersede its power as a human drama or as a borderline horror film with genuine terror and haunting scares. The first half of the film examines what it means to be a human in a world without them. How much of ourselves can we keep when there is nothing to share and nothing to spread? It’s a populace of one and, unlike Jurassic Park, nature won’t find a way. Or will it?

The first half shows what an empty world would look like to a lonely man. He would roam the streets, haphazardly driving around dead vehicles and dead bodies that will never move again, taking items as they come, such as food and gas, and wondering if the brain is slowly eroding from lack of human contact. In one of the film’s first great scenes, Neville hears every payphone in the city go off all at once. No longer at the point of reason internally, Neville must scream, in that characteristic Heston tenor, “There is no phone ringing damn it!”

It’s chilling stuff and not just because the filmmakers were able to almost perfectly replicate an abandoned city, right down to the highways and office buildings. It makes us wonder what it is like to be human when humanity itself is no longer required. There are no social rules anymore, no interaction, no morals. What does it take for a man (or woman) to act as though all were normal when nothing is? Will it lead to enlightenment or madness?

When the story shifts and we are introduced to the mutant-like survivors of the plague, whose skin, eyes, and hair are so powder-white they can’t interact with the sun or intensive light. A number of ’70s era issues come into play as allegory: The Manson Family Murders were about to be tried in court, the Cold War was still in effect, and Civil Rights were only briefly in practice.

The mutants, much like the irradiated survivors in Beneath the Planet of the Apes, are like a cult, believing that any who worship technology, such as guns and bombs, are unfit for the world. In fact, they even call themselves “The Family.” They believe in a “pure” Earth: no electricity, no gadgets, no weapons of war… and they’ll kill to protect their ways. When Neville eventually meets uninfected survivors like him, including a black woman named Lisa who he becomes romantically involved with (featuring one of the first interracial kisses in media, shortly after Star Trek did it for the first time ever), it becomes an us-versus-them battle of not only brawn but also of ideology.

Neville believes science can win the day and creates a cure, even for his enemies. But his enemies hold fast and true to what they believe in and the two clash, resulting in a violent end that concludes with not-so-subtle religious overtones. Hearing a ’70s wah pedal on the soundtrack and goofy zombie-monks running around hooting and hollering can serve to sometimes undercut how valuable a metaphor The Ωmega Man is at times, without a doubt, but this goofiness can’t fully extinguish its power. To this day it is a dystopian future that could still come true if we don’t heed the lessons the film itself presents us.

Thorn: I know, I know. When you were young, people were better.
Sol: Aw, nuts. People were always rotten. But the world was beautiful.

It is the dreaded year 2022 (hey, one we haven’t got to yet so… still possible. Yikes!). The world is overpopulated and on the brink of total collapse. New York City is bursting at the seams with 20 million people. Murders are rampant and unsolved, people sleep in any nook and cranny they can find, and food is short. The rich live in skyscrapers far from the poor, enjoying the water, fruits, veggies, and meat that the people below lack. But the populace is not without hope entirely. A megacorporation called Soylent provides food every Tuesday: Soylent Green. Enough to keep the overcrowded streets healthy enough to die slower.

Soylent Green is certainly the more sobering of the two films featured here. It lacks the pseud-whimsical nature that The Ωmega Man possesses but that has a lot to do with expectations vs. reality. The Ωmega Man is an expectation of continued warfare and looks at the “what if.” Soylent Green is more reality-based in that it looks at what overpopulation and environmental greed will do with enough time. Sure, we aren’t two years away from a global epidemic, but science in 2020 has pointed to that eventual result sooner rather than later.

So, in a sense, Soylent Green isn’t far off target, year-wise, unlike many of its other dystopian brethren (based on the prior three films reviewed in this series, we’ve all been doomed in 1977, 1985, and 2000!). And while The Ωmega Man certainly has something to say at points, Soylent Green is a wall-to-wall message: keep this up and we are all screwed. Police officer Thorn (Heston) is our avatar as that message plays out in real-time.

Soylent Green has one of the greatest twist endings in cinema that deals with overpopulation in one of the most brutal, sadistic ways. (Spoilers beyond this point. You’ve been warned.) When Thorn finds out that the criminals and the euthanized men and women of the world are mashed into little green food cubes called Soylent Green and fed to the very people causing the problem in the first place, tragic irony is at play: we are what we eat. 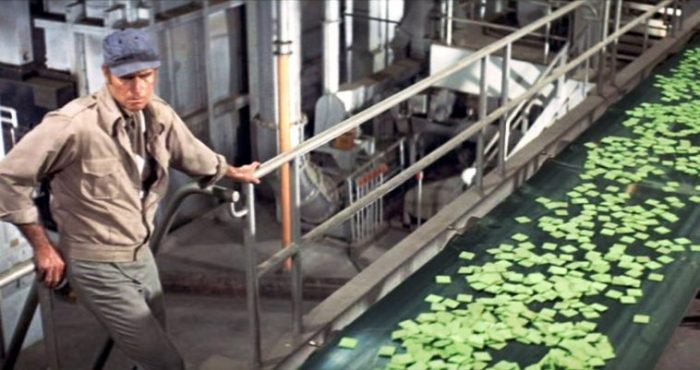 There is no reasoning behind Soylent’s choice to make the dead a food source. It is presented as a cruel but, dare we admit, necessary measure. Outside of Thorn’s apartment, for example, people sleep in the stairwells and in gutters on the street. They have nowhere to go, much less anything to eat. The film lays blame less on the corporations (this is not an anti-corporate film though, like in many films of this ilk, the powers that be do their best to cover up a potential scandal) and more on the people themselves. They brought about their own destruction and literally must live off of it.

Even worse is the possibility that nothing will change. Thorn’s right-hand man Sol, as quoted above, admits that humanity was always bad, it’s just that lately they’ve taken the world with it. Other subtle concepts that we can’t dive into here, like the idea of women as human “furniture” that come with a rich apartment, further add to the thesis that humanity is all about acquisition and pleasure, the results for future generations be damned.

So we end this week’s double feature on somewhat of a down note. But the essence of science fiction has always been to throw a metaphorical spotlight on our current age. And even though both of these Charlton Heston films were made in the ’70s, their ability to reflect today’s culture is impressive and gives these nearly 50-year-old features staying power.

Both The Ωmega Man and Soylent Green are available as part of the “‘’70s Sci-Fi” collection on the Criterion Channel. Also available wherever digital or physical media is sold/rented.