Every year, I hear the warning that all the bad horror movies are always released to theatres in January, and every year I try to ignore that warning and go into these January releases with an open mind. Sometimes my open mind pays off, like with last year’s surprise early-year hit Escape Room. Unfortunately for 2020, the curse of the terrible January horror movie came true with The Turning, a movie so bad that it may just well be the worst horror adaptation I have been forced to sit through.

The Turning is the latest film adaptation of Henry James’s novella, The Turn of the Screw, originally published in 1898 and widely considered to be one of the first great works of horror fiction. The story follows Kate (Mackenize Davis), a first-time governess hired to tutor Flora (Brooklynn Prince) and Miles (Finn Wolfhard), two orphaned children who lost their parents in a tragic accident. Kate quickly realizes that all isn’t exactly right with the house or with the kids she is charged with looking after, and the audience is left wondering whether the bumps in the night are real or a product of Kate’s imagination.

I am a big fan of Gothic horror, so I had been looking forward to this film for quite some time. The trailer made me slightly wary, but I still went into the theatre with high hopes and those hopes were quickly and consistently trampled on as the film went along. The Turning is a horror cliche montage, as if the writers and director were working their way through a “Horror Film 101” checklist: weird close-up shot of an eyeball – check; cheap jump scares – check; mirror gags – check; phantom hands – check; something hiding under the bed – double-check. And my least favourite horror trope of all: underwater bathtub scare. Honestly, I don’t know a single person who fully submerges their head with their eyes open while in the bath and I’ve just about had it with having to see it in every middle-of-the-road horror movie.

The horror cliches are only the beginning of the list of faults with The Turning. The film is, for some reason that I don’t understand, set in the 1990s yet doesn’t feel like a ’90s film at all, outside of the odd Kurt Cobain reference. I understand wanting to update the film to modern times, but the choice to set it in the ’90s rather than in the 2010s, or in an undetermined present time, baffles me and has nothing to do with any thematic or stylistic elements of the film. A disconnect from theme and style is a problem the movie suffers from on a larger scale, as well. Although there are many possible and interesting thematic angles brought up throughout the film – like conversations on privilege, grief, and mental health – none of these elements become a through-line within the film and are forgotten about just as quickly as they come up.

It is really a shame that the narrative, plot, and dialogue are so lacklustre because they are paired with visuals that are anything but plain. The set and production design are easily the best things about the film, with lush, rich colors and stunning architecture that make the house, and the grounds it sits on, feel like the most alive character in the whole film. Don’t get me wrong, the movie is filled to the brim with talented actors, especially Brooklynn Prince who proves that her memorable turn in The Florida Project wasn’t a fluke. However, the material these actors are given doesn’t make it easy for them and leaves Davis feeling out of place and like the unintentional villain, and Wolfhard seemingly existing as nothing but the kid with the creepy one-liners. 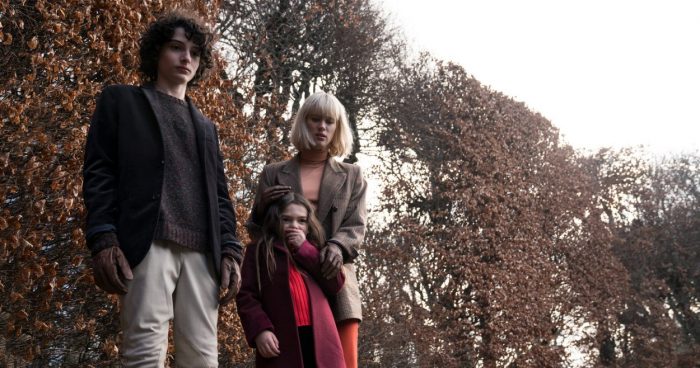 The Turning is, without a doubt, a wasted opportunity and a waste of my time. It takes the complex and nuanced horror from James’s novella and turns it into a soulless mess. The creative team could have taken this classic story and made it into something really relevant to contemporary times by focusing on the layered, and not extensively explored, themes of grief and trauma from the novella, or even the threads of interesting themes of privilege and wealth they themselves bring up. The film ultimately decides to focus on nothing and ends in a way so frustrating and meaningless that it will have you yelling expletives once the credits start to roll. My recommendation is that you sit this one out, stay at home in your PJs and curl up with James’s book instead.